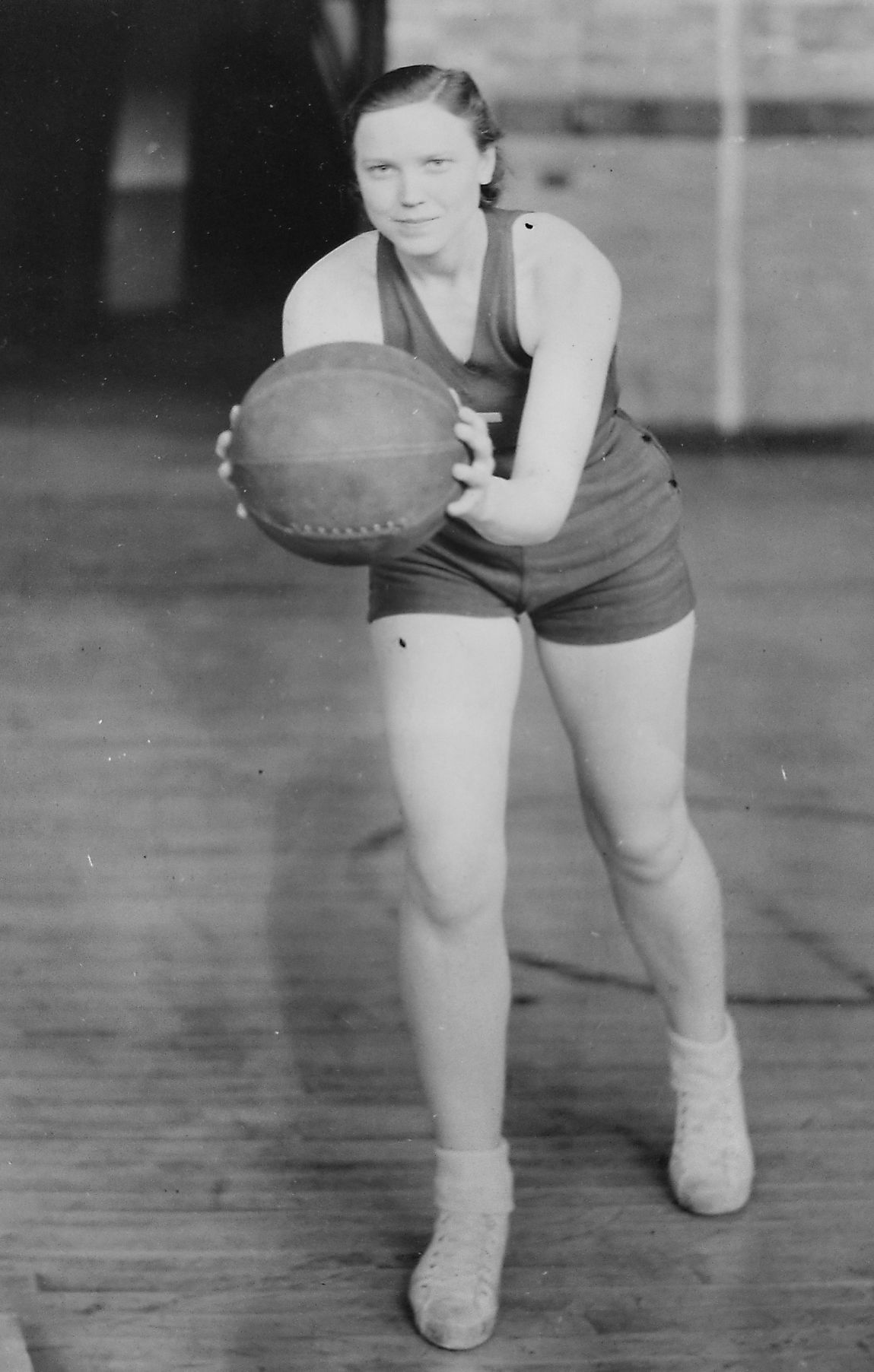 Dew Drop Brumley in her basketball uniform at Murray State in 1933. 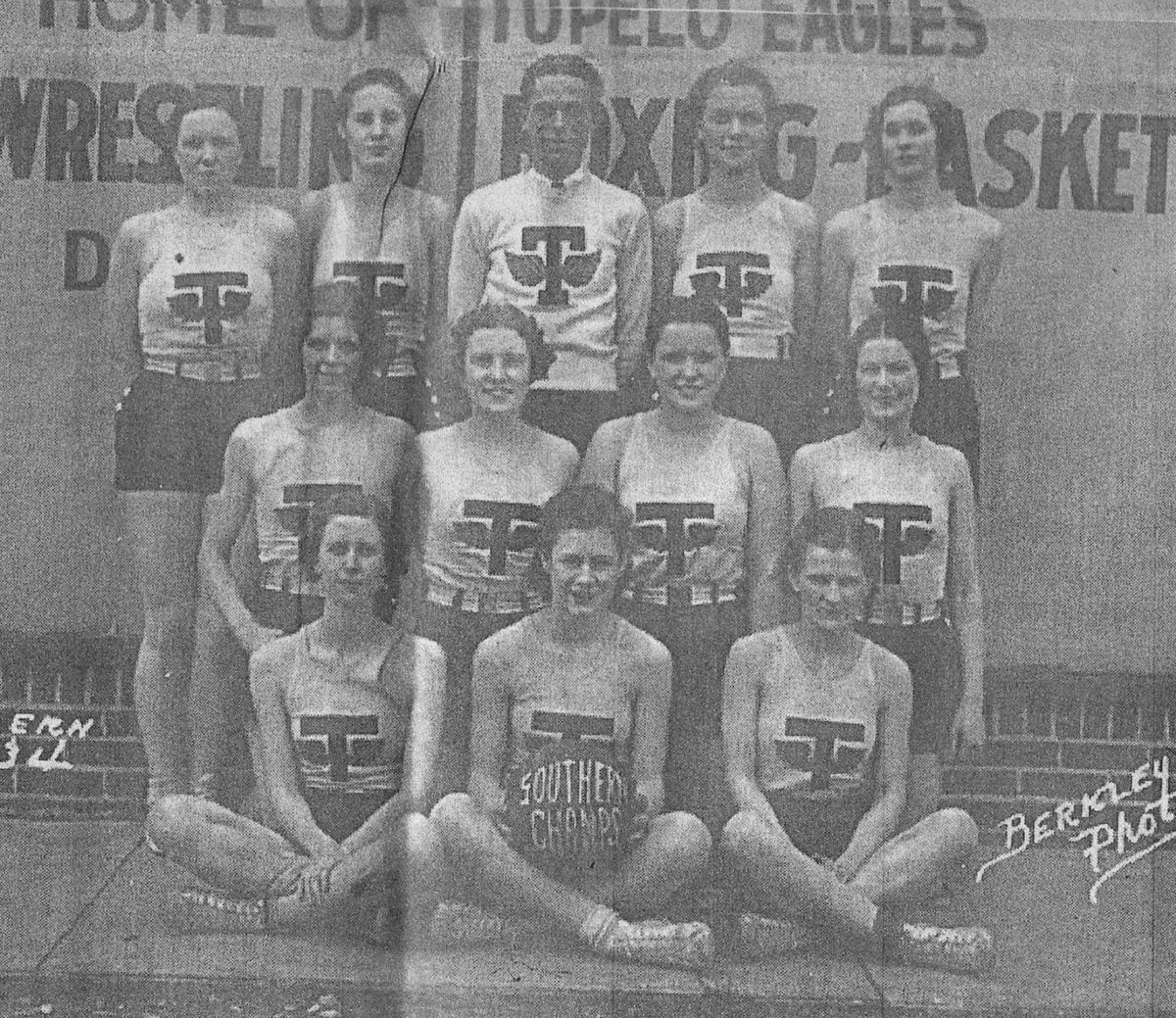 Dew Drop, back row, far left, is pictured with her teammates when she played for the Tupelo Red Wings, a women’s semi-professional basketball team.

Dew Drop Brumley in her basketball uniform at Murray State in 1933.

Dew Drop, back row, far left, is pictured with her teammates when she played for the Tupelo Red Wings, a women’s semi-professional basketball team.

Several weeks ago I saw a news story someone had shared on Facebook about Dew Drop Rowlett. This was of interest to me because Mrs. Rowlett was my health and physical education teacher when I was in the 7th and 8th grade at Murray High School. After reading the news story by Abby Loden of the Itawanba (Mississippi) County Times, I discovered quite a few things about Mrs. Rowlett I did not know, including playing women’s basketball at the college level. Through a mutual friend, I reached out to her daughter, Kathy, who lives in Florida, and asked her to share more information about her mother which she did via email. I look forward to sharing the story of Dew Drop Rowlett with all of you.

First of all, to set the record straight, Dew Drop was Mrs. Rowlett’s first name. In the story published by Abby Loden, she referred to her name as a nickname, but according to her daughter Kathy Rowlett, that was incorrect.

“When my mother was born, her father looked out and saw the dewdrops on the roses. Thus, she became Dew Drop,” said Kathy.

“Her parents were known as ‘Big Dad’ and ‘Big Mother’ to all,” said Kathy.

Big Dad was a school teacher and principal. The family moved frequently as teaching positions came and went depending on the financial status of the small Mississippi communities. Education was a top priority in the Brumley family. Two of her brothers and one sister also became teachers and/or coaches.

He quoted Rowlett as saying “Dad always had a goal up somewhere around the place for us to shoot at.”

Kathy said that whenever she would ask her Mom about “the good ole days,” she would get an answer of about one to two sentences.

“My mother felt the past was the past and she was busy living in the present and looking to the future,” said Kathy.

Rowlett graduated from Itawamba Agricultural High School in 1929 where she ran track. According to Loden, she was a force on the high school girls’ basketball team in the late 1920s. She helped lay the groundwork for the program to become one of the most successful teams in the country during the late 1930s.

She began her collegiate career at Freed-Hardeman College from 1930-32, where she was named to the Mississippi Valley Conference All-Tournament team in 1930, 1931 and 1932. She was named the most valuable player in back-to-back years beginning in 1931, and the 1932 team had a record of 10-1 (tie). She also played tennis. In 1931, her peers at Freed-Hardeman voted her “best girl athlete.”

According to Garrott, she went to Freed-Hardeman as a “basketball scholar.” This meant she received her room, board and books in return for her basketball playing ability in a Freed-Hardeman uniform. According to Kathy, she also worked cleaning homes of faculty members.

Rowlett came to Murray State in 1933 on a basketball “scholarship,” which included a job sweeping halls and waiting on the three training tables set up in the Wells Hall dining room for the male athletes. The late Roy Stewart had joined the Murray State faculty and he coached the Murray girls’ basketball team. According to Garrott, Stewart had seen Rowlett play when the Freed-Hardeman girls came to Union University, where he had previously taught. When she finished junior college, he convinced her to continue her education at Murray State and play basketball for him.

Garrott shares that Rowlett remembered her first game at Murray. They were playing a completely outclassed team of girls from the University of Louisville. The game was being played on the spacious stage at Lovett Auditorium. When Coach Stewart took Rowlett out of the game, she had scored 62 points. She thought she had done something wrong, and she asked Coach Stewart what she had done wrong. He told her nothing, it was what she was doing right and he wanted to try to hold the score down a little bit.

Sadly, Murray State did away with women’s basketball. Rowlett did not have the money to continue at Murray State, so she went back to Mississippi. She taught at Big Dad’s school and played for the Tupelo Redwings, a semi-pro basketball team. It was with the Redwings that she played in the national AAU championship tournament at Wichita, Kansas, and was named an AAU All-American.

Garrott also shared that playing at that same AAU tournament was an All-American playing on a team from California, Mildred “Babe” Didrikson, perhaps the greatest woman athlete American has known, at that time. She went on to become a professional women’s golf champion and won every major title at least once before her death in 1953. Another of the game’s early women stars was Doll Harris.

Dew Drop is quoted as saying, “That was some pretty fast company for a little old country girl from Mississippi.”

Kathy also shared that her mother said one of the highlights of the tournament was meeting and talking to James Naismith, the inventor of basketball. Years later she shared with Kathy that she knew Margaret Wade and had played basketball with her.

Kathy said she found a letter of her mother’s in an old scrapbook. After the AAU Tournament, a company asked her to move to their city to play on the company’s women’s basketball team. The company would provide an appropriate salary and a job.

“In the return letter, my mother thanked them for the offer, but told them it was time for her to start teaching boys and girls,” said Kathy.

During Rowlett’s first year at Murray State, chapel was mandatory and there was a boy sitting behind her who pulled her hair and that is how Dew Drop Brumley met Tom Rowlett. The Rowletts were in the tobacco business and while she was teaching in Mississippi and playing for the Redwings, Tom worked as a salesman for J.D. Rowlett Tobacco and Sons. Kathy said he made sure his route included northeast Mississippi. They were married June 6, 1934, in Batesville, Mississippi. Dew Drop Brumley returned to Murray State as Mrs. Tom Rowlett, but there was no basketball team for women. She graduated in 1935.

Tom and Dew Drop moved into the Rowlett home at 711 Institute St. (now Main Street). Over the years, portions of the large home were converted into apartments and an addition was added on the west side after the birth of their daughter, Kathy, in 1951.

The address of the house was perfect for Dew Drop’s career at Murray High School and for Kathy’s schooling...out the back door, across one yard, across Eighth Street and onto the school grounds.

During the early years in Murray, Dew Drop Rowlett helped her mother-in-law care for the Rowlett home. She taught physical education part-time and played basketball, softball and tennis. She went to the National Aquatic School and spent hours swimming long distances to train for this. She then taught swimming lessons, worked on the waterfront at various camps and became a lifelong advocate for learn-to-swim programs. She was also a camp director at Bear Creek Girl Scout Camp. She was a strong supporter of the Girl Scouts and served as troop leader at various times.

Rowlett began teaching and coaching at Murray High School in 1938. In addition to her teaching responsibilities, she was also the cheerleader sponsor. Her squads were as talented and disciplined as any championship athletic team, said Kathy. The girls practiced Monday and Thursday afternoons and sometimes on Wednesday if things were not satisfactory to Rowlett. They went to cheerleading camp at Ole Miss each summer. At that time, it was an honor to be a Murray High cheerleader, but it was hard work. Rowlett also served as a class and student council sponsor.

She went on to receive her master’s degree at Louisiana State University in 1943, and her Ed.S in 1960 from Peabody College in Nashville, Tennessee.

Rowlett’s story will be continued next week.