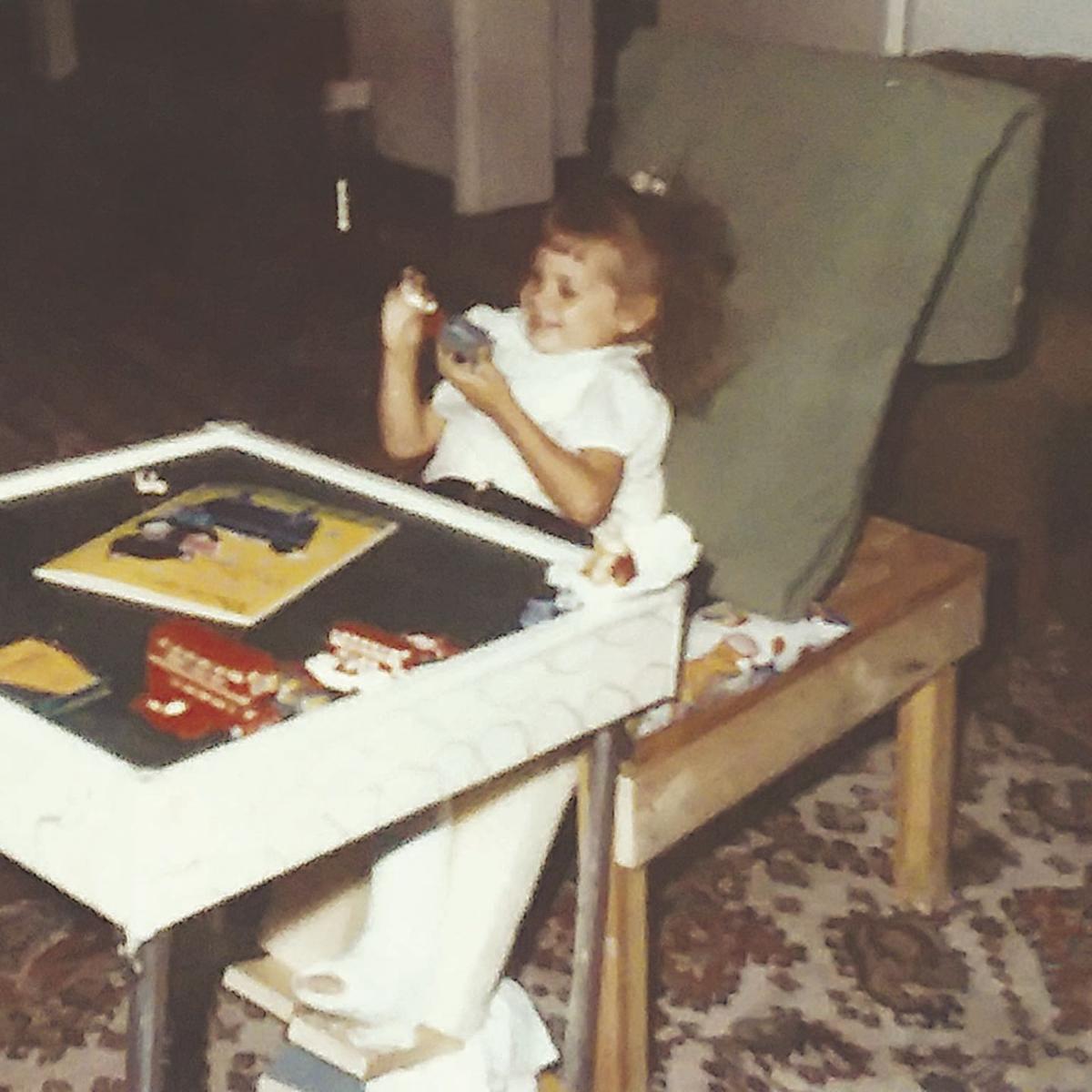 Melissa sitting at the table her father, Woody, built for her while in a body cast. 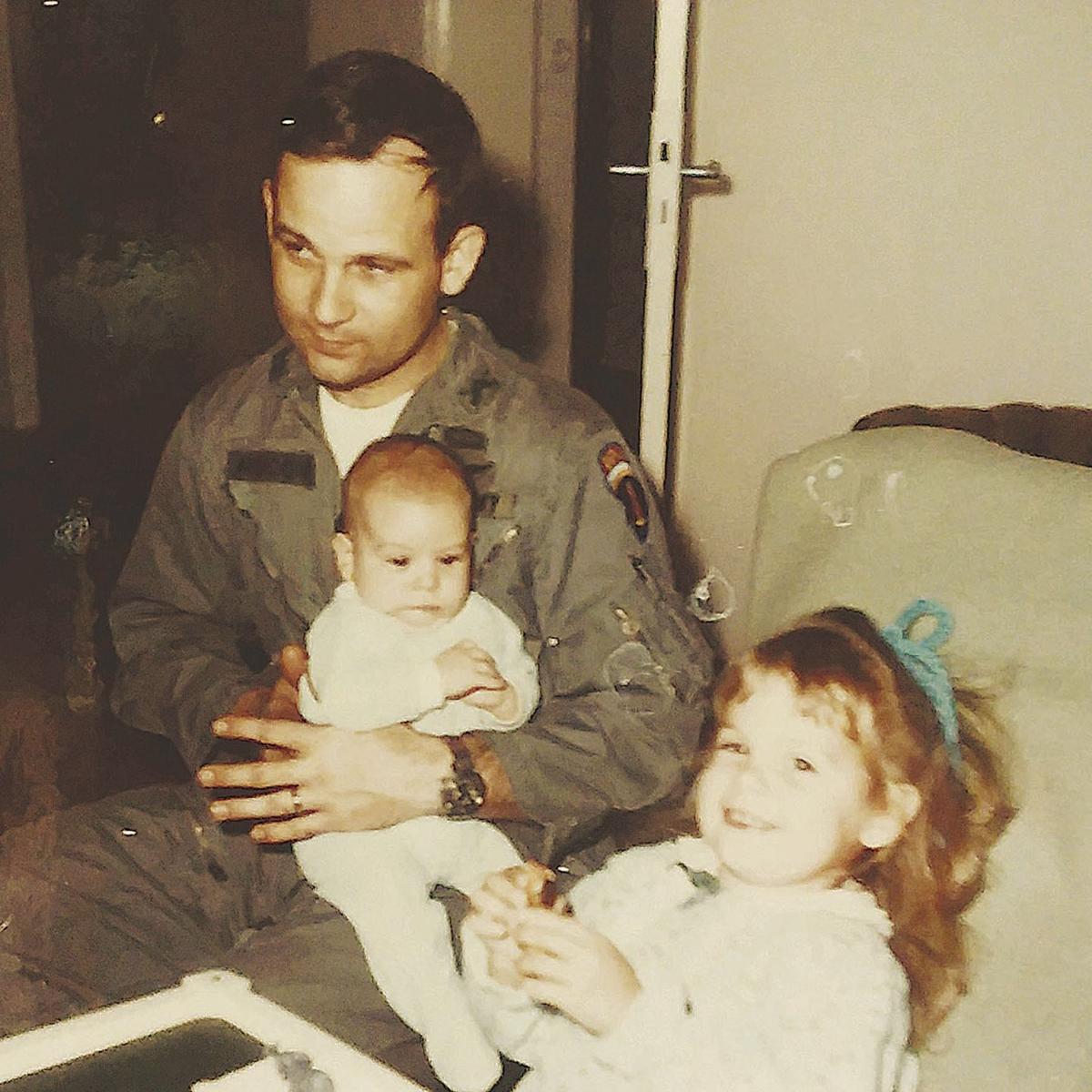 Melissa sitting at the table her father, Woody, built for her while in a body cast.

While Donna and Woody were living in Berlin, Donna’s brother, Eddie and his wife had spent the summer working as medical missionaries in Africa. They made plans for all of them to meet in Paris before Donna’s brother and wife flew back to the states.

“When we arrived in Paris, we stayed in a tiny hotel on one of the side streets in Paris,” said Donna. “We had a great time visiting and it was time for them to leave for the airport. It was early morning and we had plans to drive them to the airport. Woody had parked our car on the opposite side of the street across from the hotel on a one-way street. The front of the hotel was mostly glass. I had gone up to the room to get Roger and to check to be sure we had not left anything in our room. I was coming down the stairs holding Roger, with Melissa, who was 2, and Woody was outside packing the car. Melissa saw her daddy across the street through the glass and before I could grab her, she ran down the stairs, dashed out the door and ran right in front of a car and the car hit her. There was no way the person driving could have seen her because she darted out between cars parked on the side of the street. She was tossed about 65 feet down the street and landed on her head. I got to the sidewalk and could not move – I was rooted to that sidewalk. It was a nightmare. I am not making a sound and I am praying. That was all I could do.”

“Woody thought she was dead,” Donna said. “Fortunately, a man in the hotel had witnessed the accident and he was a doctor and he began to immediately administer CPR and I heard her cry. That was the most beautiful sound I have ever heard. There was a firehouse just around the corner from the hotel that also housed the ambulance service. The hotel proprietor called the ambulance and they were there in seconds.”

Donna said they let Eddie go with Melissa in the ambulance because he was a doctor.

They took Melissa to a children’s hospital in Paris, which was one of the best hospitals in the world, said Donna.

“It seemed the bumper of the car had hit her femur, it had snapped and the bones had moved where they were laying on top of each other instead of just separated,” said Donna. “The side of her head looked like someone has bashed it in. It was so scary, but they could find no trauma to her brain. Talk about an answered prayer! The doctor even ordered X-rays a second time because he did not believe the results.”

Donna said the only thing they could give her was a pacifier and she had been trying to break her from that.

“They put her in traction and would only let us see her once a day for 15 minutes,” said Donna. “I was beside myself.”

Donna said Woody had studied French and he could communicate some with the nurses, but she did not know French at all. The nurses told Woody the reason they had such restrictions was because children would get upset every time the parents would leave the room.

“They were afraid to give her anything for the pain because of her head injury and told us she would be in traction for several weeks,” Donna said. “They had to gradually move the bones in her leg and it was very important to keep them moving so they did not have to re-break the bones.”

After a few days, the French government decided they did not want to pay for her care in a French hospital, so Melissa was to be moved to a hospital in Frankfurt, Germany.

“They were going to send the Air Force to pick her up and fly her to Frankfurt, but they had to put Melissa in a body cast to stabilize her leg before she could be moved,” said Donna.

Because of weather conditions, they could not fly out of Paris when planned, and therefore Melissa was in a body cast waiting to be moved. It was three days before they could send the plane to pick her up, Donna said.

“Woody was going to meet us in Frankfurt,” said Donna. “I had a baby (Roger) and a toddler in a body cast. The ambulance picked us up and the driver was all over the road and speeding to get us to the airport. I had to talk to the Lord to ask him why he had saved us this far to let us die in an ambulance accident.”

They arrived safely, but the ambulance had driven off without Melissa’s X-rays which they were supposed to take with them to the hospital in Frankfurt.

“We arrived at the hospital in Frankfurt late on a Friday afternoon,” said Donna. “All the orthopedic doctors had left for the weekend to attend a medical conference and the pediatrician would not see Melissa because she was an orthopedic patient. I thought Woody and I were both going to ‘lose it.’ She couldn’t eat in a body cast, she was miserable and crying, and I also had a baby to feed. I finally talked to the Lord and told him I couldn’t handle all of this and didn’t know what to do. I have to let go and feed my baby and I asked the Lord to please take care of Melissa. It was as if this peace washed over me. I even had goosebumps. I took a deep breath and told Woody it was all going to be OK.”

When Monday came, they assumed the first person they would see would be the orthopedic surgeon, but there was no sign of him.

“Woody went to ask and was told the doctor was in surgery,” said Donna. “I don’t know what he said, but I do know the nurse later told me the doctor came mid-morning and asked who was this captain that was driving his staff crazy. But when Woody told him the circumstances, the doctor told his staff to finish what he was working on and he took the steps three at a time to get to Melissa and physically carried her to get X-rays.”

Donna said the doctor called them in and asked when the accident had happened.

“After the accident, the bones in her leg were overlapping,” said Donna. “The doctor showed us her X-ray and said ‘Look at this! Her bones were perfectly straight.’ I knew then that God could move bones inside of a plaster body cast.”

The doctor told them to take Melissa home without traction, but remaining in the body cast until the bones completely healed.

“We go back to Berlin,” said Donna. “I took the train with Roger and Melissa in a  body cast. When we arrived in Berlin, the whole American community had rallied and met us at our house. But I couldn’t find Woody. He was doing something in the basement and I was ready to choke him. But two days later, he came upstairs with a table he had built, the size of a card table, and it was cut out where Melissa could sit, and under the table was a place for each leg. A belt could be used to strap her into the seat and she could be upright where she could feed herself and play also. It was a genius idea.”

When the doctor came to visit them, he was amazed at the table Woody had built.

“Melissa learned to walk in that body cast,” said Donna. “Her good leg was free and somehow she figured it out.”

Donna said Melissa had a “coming out party” on her third birthday - coming out of the body cast.

“She was in that body cast for almost three months and she also had chicken pox while she was covered in that cast,” said Donna.

Donna said Melissa’s leg was weak once the cast was removed.

“It would give out and that scared her,” said Donna. “The doctor came one day and looked out the window to see Melissa standing and watching all her friends play because I would not let her cross the street. The doctor told me that he knew I was afraid, but she was old enough to look both ways and people around this area didn’t drive more than 10 mph because they would be arrested if they did. It was hard for me to let go, but I knew I had to give her some freedom to be a child.”

Donna said they had the blessing of getting to know a young woman who wanted to babysit.

“She was the sweetest, kindest soul,” Donna said. “We were not willing to leave the kids with anyone, but she was wonderful. She was an older teenager and her father was the colonel in charge of intelligence in Berlin. We got to know her parents well and would visit with them and they with us.”

Donna said there was an American Woman’s Club in Berlin, mostly for military wives. There were lots of American corporations in Berlin.

“This young lady’s mother was the president of the board for the American Woman’s Club. The U.S. Army chaplain’s wife was chairman of the hospitality committee, but he received orders to leave and Dorthea, the president, asked me if I would take over as the chairman of hospitality. I told her I had two children and didn’t know that I would have time, but she told me her daughter would be happy to babysit. I read the report of the previous chairman and it tugged at my heart, so I accepted.”

Next week – Donna becomes involved with volunteer work in Berlin and when returning to the U.S.

Sorry, there are no recent results for popular articles.

Sorry, there are no recent results for popular images.