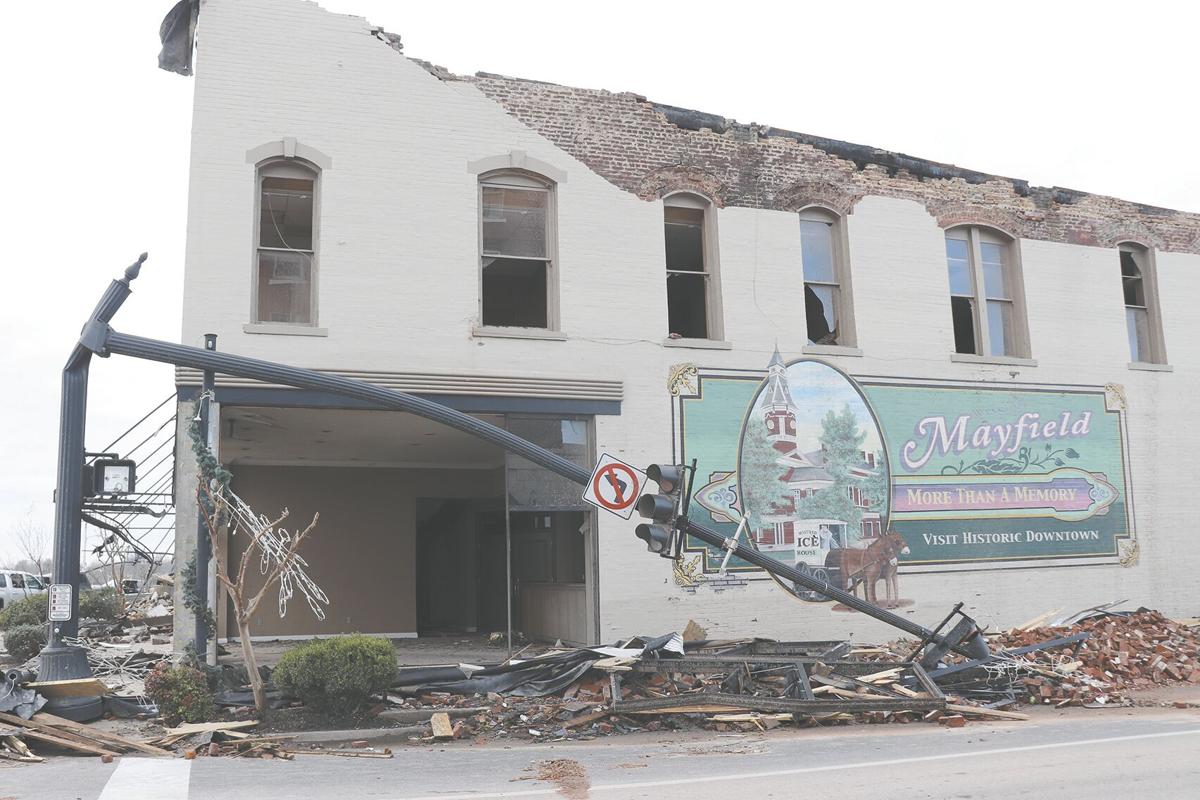 Surrounded by rubble and debris, a mural shows the Graves County Courthouse as it was before Friday’s tornado ripped its iconic spire from the roof. 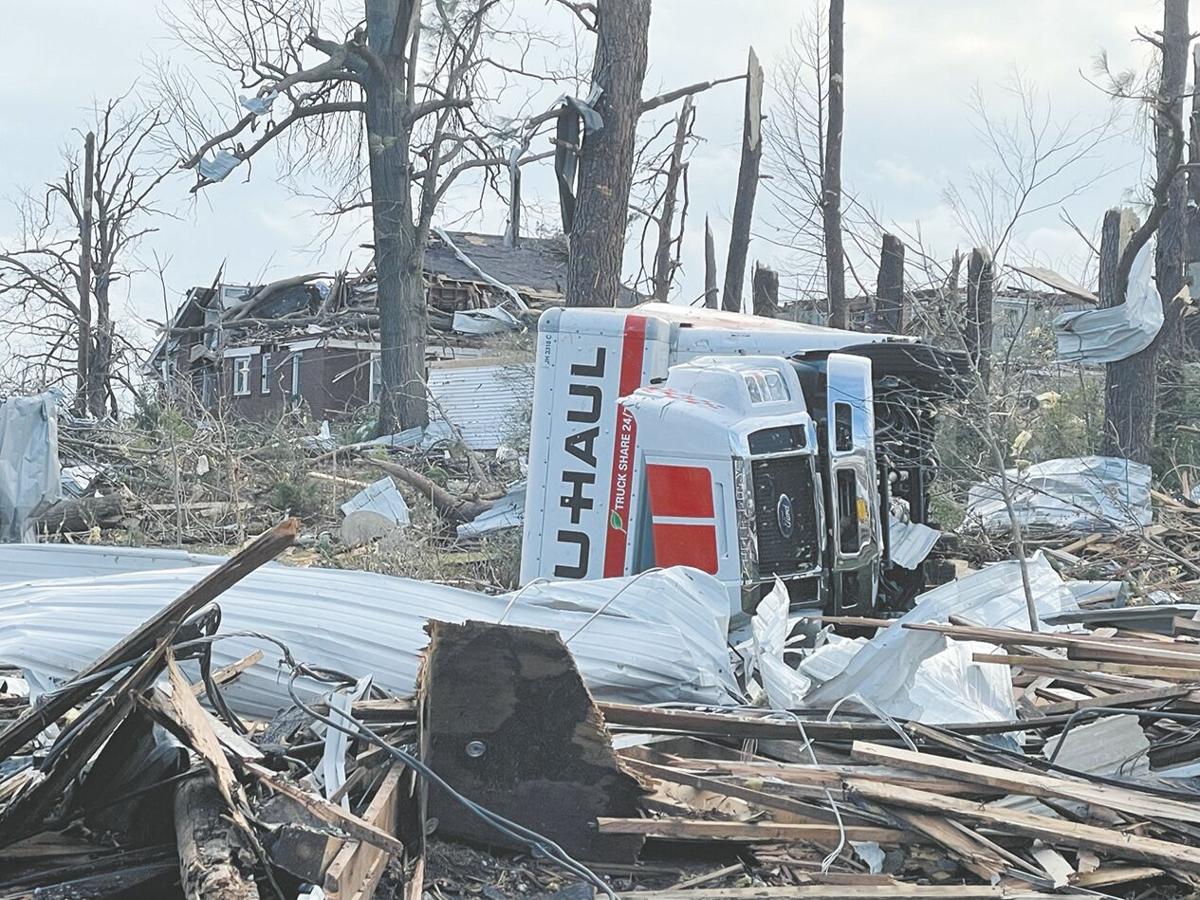 Like probably hundreds of other vehicles across Mayfield, a U-Haul truck is seen on its side in the midst of buildings that were completely obliterated.

Surrounded by rubble and debris, a mural shows the Graves County Courthouse as it was before Friday’s tornado ripped its iconic spire from the roof.

Like probably hundreds of other vehicles across Mayfield, a U-Haul truck is seen on its side in the midst of buildings that were completely obliterated.

MAYFIELD – While the state has only confirmed around 50 deaths, Gov. Andy Beshear said he believes more than 70 Kentuckians may have lost their lives – though he feared it could top 100 – in the largest and most devastating tornado in the state’s history.

After having formed in Arkansas, the tornado made its way to western Kentucky and struck Mayfield around 9:30 p.m. Friday, destroying countless homes, businesses and government buildings. In the downtown area on Saturday, it was virtually impossible to find any buildings that were not severely damaged, and crumbled remnants of wood and brick were spread across the ground in every direction as far as one could see. In a news conference Sunday in Mayfield, Beshear said at least 1,000 homes were lost in Mayfield, but the exact number won’t be known for some time.

Mayfield Consumer Products, a candle factory on Industrial Drive, had 110 employees inside when the tornado came through, and crews were working throughout the day and into the night conducting a rescue and recovery operation. On Sunday, WPSD-TV reported that an MCP spokesman said 101 workers were accounted for, including eight who died and 93 who came out alive. Graves County Coroner Brad Jones said he could not confirm that report as of Sunday night. Jones said the Kentucky Medical Examiner’s Office and coroners’ offices from several other counties were assisting in the search and rescue efforts.

Beshear said the tornado crossed four states and was more than 200 miles long, making it the longest tornado track on record and the largest in Kentucky history.

“I want to thank every local emergency management employee, police officer, firefighter and first responder,” Beshear said on Saturday morning. “This has been one of the toughest nights in Kentucky history. It’s hard to put into words. Remember, each of these lost lives are children of God, irreplaceable to their families and communities. But we will make it through this. We will rebuild. We are strong, resilient people – and we’re going to be there every step of the way. This is one state standing strong.”

Beshear declared a state of emergency and activated more than 180 Kentucky National Guard members as well as the Kentucky State Police. The governor praised the federal response during news conferences he held at Mayfield’s EOC Saturday morning and Sunday afternoon, saying he had spoken to President Joe Biden by phone three times and he had never seen a major disaster declaration approved so quickly. Biden approved an emergency declaration by Saturday afternoon and by Sunday afternoon had declared a major disaster declaration, which opens the door to much more funding from the Federal Emergency Management Agency for individuals, public infrastructure and other needs.

Comer was present at Sunday’s news conference and expressed gratitude for the federal response so far, thanking Homeland Security Secretary Alejandro Mayorkas and FEMA administrator Deanne Criswell – who both also spoke at the conference – for coming to Kentucky immediately.

“This will be, I believe, the deadliest tornado system to ever run through Kentucky,” Beshear said in Mayfield Saturday. “Earlier this morning at about 5 a.m., we were pretty sure that we would lose over 50 Kentuckians. I’m now certain that number is north of 70. It may in fact end up exceeding 100 before the day is done. The damage is even worse now that we have first light. A couple places have been hit incredibly hard, certainly Mayfield here in Graves County, but everywhere along the line of this tornado that touched down and stayed down for 227 miles.”

Even by Sunday, Beshear said he could not confirm any different numbers than what the state had the day before.

“Kentucky is united today behind the people of western Kentucky,” he continued. “We want to be here to help dig out, to help make rescues, to help provide when people are suffering and then to help rebuild. This is not a one-day thing. This is one state, and we will stand united to make sure that we can lift our families back up. But please know that there are a lot of families that need your prayers, prayers that somebody may be found or prayers to help them through the grieving process.”

After leaving Mayfield, Beshear traveled to Dawson Springs, which also saw catastrophic damage. Beshear’s father, former Gov. Steve Beshear, grew up in Dawson Springs, and the governor became emotional as he talked about the losses that small Hopkins County was facing as well. On Sunday, he said his grandparents’ old house was still standing, but barely anything was still there on the surrounding sides. That morning, Beshear also visited and assessed the damage in Muhlenberg and Ohio counties before returning to Mayfield that afternoon.