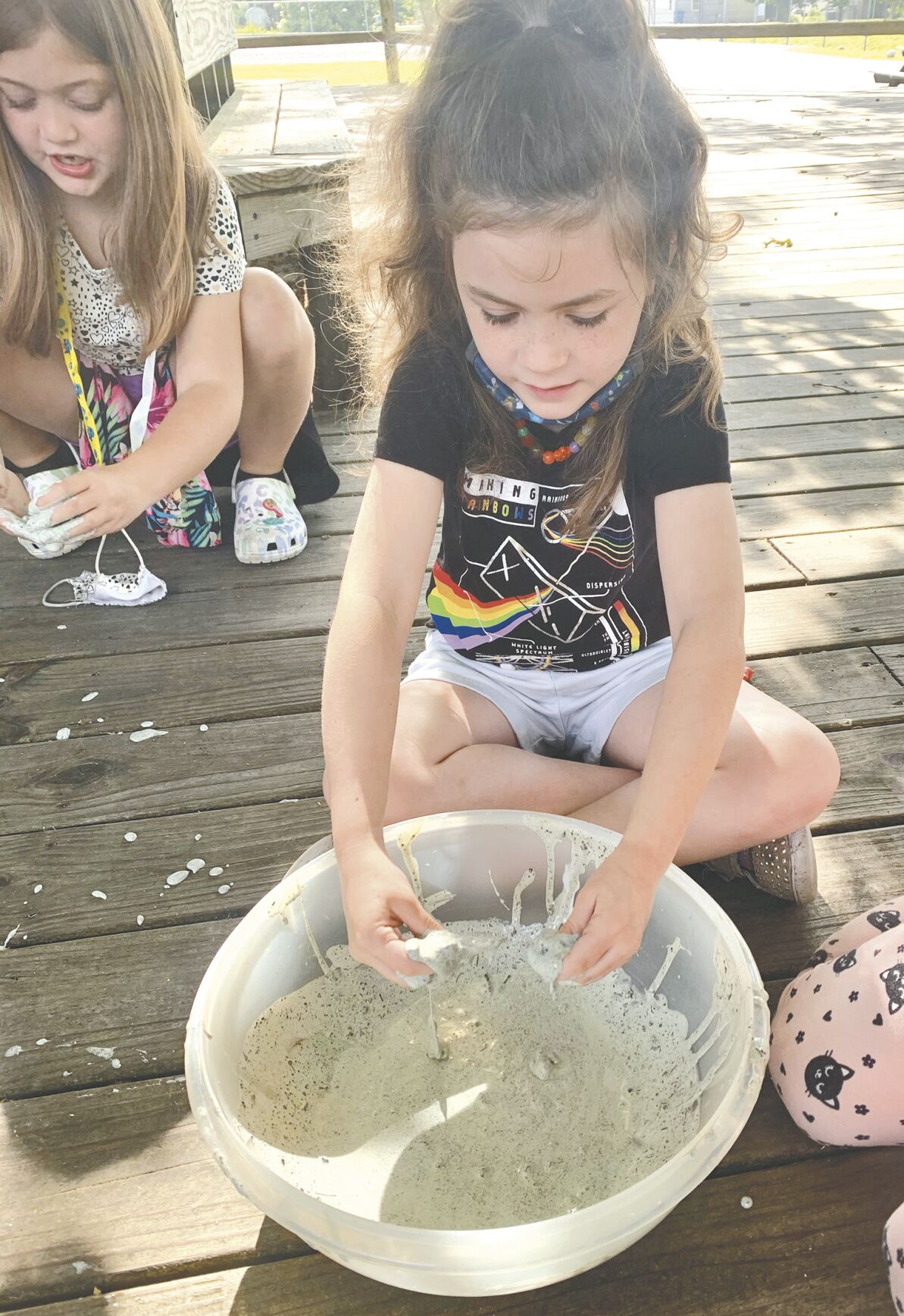 Vivien Allgood, daughter of Kady and Martin Allgood, plays in a bucket of slime during the first week of Summer Kids Company at Murray Elementary School. At left is Piper Gingles, daughter of Lora Hopkins. 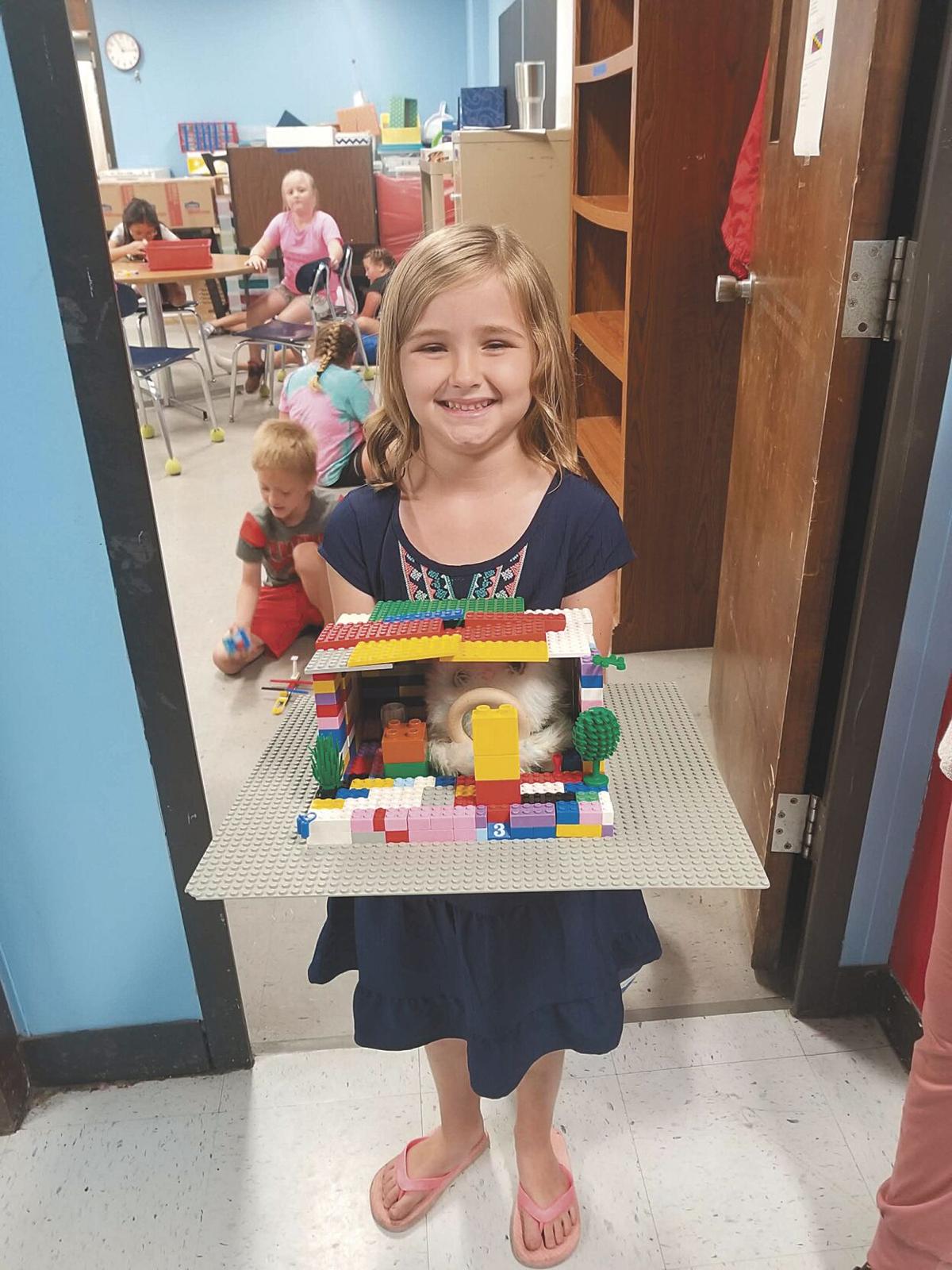 Olivia Fitzhugh, daughter of Patrick and Leslie Fitzhugh, holds a LEGO project during Calloway County's L.A.S.E.R. program in July 2019. After having to take last summer off because of the COVID-19 pandemic, the summer program returns Tuesday at Southwest Elementary School.

Vivien Allgood, daughter of Kady and Martin Allgood, plays in a bucket of slime during the first week of Summer Kids Company at Murray Elementary School. At left is Piper Gingles, daughter of Lora Hopkins.

Olivia Fitzhugh, daughter of Patrick and Leslie Fitzhugh, holds a LEGO project during Calloway County's L.A.S.E.R. program in July 2019. After having to take last summer off because of the COVID-19 pandemic, the summer program returns Tuesday at Southwest Elementary School.

MURRAY – After being closed for more than a year, the after-school and summer programs for the Murray Independent School District and Calloway County Schools are welcoming students back to the delight of employees, parents and children alike.

MISD hosts the program known as Kids Company, and Calloway County Schools hosts the L.A.S.E.R. (Laker After School Educational Resources) program. Leisha Barlow, principal of Calloway County Preschool and the director of the L.A.S.E.R. program, said L.A.S.E.R. is a licensed childcare program. She said the after-school program returned to Southwest and East Calloway elementary schools after spring break and will be back at North Calloway when the next school year begins in August. The summer program begins next Tuesday, June 1.

Barlow said this is her 10th year leading the L.A.S.E.R. program, but it was a challenge getting everything in order after being shut down for more than a year.

“We were starting from ground zero again, and we had to make sure regulatory requirements and health and safety were met and that type of thing,” Barlow said. “That’s something we’re used to doing; we just hadn’t been responsible for that in terms of an after-school program or summer L.A.S.E.R. in a few months.

“So we had to get all those documents turned back in and we had to have some virtual visits with the Division of Regulated Childcare, which were then quickly followed up by in-person visits at our sites that are opened. Every childcare site is visited one time per year by the Division of Regulated Childcare to make sure that we are following the regulations and that our children are safe, happy and healthy in our facilities.”

Barlow said it was wonderful to be able to welcome children back this spring and give their parents some relief from having to seek childcare elsewhere. The summer program is located at Southwest Elementary.

“We provide a huge service, along with Kids Company at Murray city schools,” Barlow said. “It’s a huge service to the community because what happens is, standalone childcare (establishments) may or may not have a lot of slots for summer. Because the kids come to school, they may not be able to add a lot of elementary kids in the summertime, so we fill a niche in our community for the elementary-age title. … We are tickled to death to have our kids back and to again be able to provide this service for our families.

Barlow said L.A.S.E.R. will have a STEM program led by a teacher who works in another district but lives in Calloway County, and students will also be participating in the Calloway County Public Library’s virtual summer reading program. Although the program is currently not allowed to take its students on field trips, Barlow said she is inviting several guests to visit and provide special programs for the children at least once a week.

“It’s going to be a fun, laid-back type of atmosphere, but at the same time, we are obviously going to connect it to reading and enrichment for our students,” Barlow said.

While Calloway’s and Murray’s summer programs both had the challenge of relaunching after having no program last summer and no after-school programs since March 2020, MISD’s Kid Company – often referred to as Kids Co – had the additional challenge of launching with a new director. However, Kids Company Director Melissa Durham already had a long history with the program before she was hired to lead it. She said she first worked at Kids Co in the summer of 1999 after being hired as an instructional assistant by former director Peggy Chrisman. Chrisman later hired her as the assistant director in 2003, and she became the site director in 2006. She retired in 2012, but came back to MISD four years ago. She applied for the director’s job after former director Linda Metz decided to retire, and she officially started on April 19.

Kids Co is offered at both Murray Elementary School and Murray Middle School. Like L.A.S.E.R., Durham said the program is also a licensed daycare, which means they have to follow all the state regulations that apply to every daycare center across Kentucky.

“Honestly, we started all over again,” Durham said. “It was a brand-new program. (First I had) to get approved as the director, because yes, the school district hired me as the director, but then all of my credentials and all of my qualifications had to be sent in to the state and the state had to approve that changeover. Because when Linda Metz retired, there had to be a director listed (on the application) even though we were closed, so they put (Assistant Superintendent) Lou Carter as the temporary director.”

After the state approved the director change, Durham said Mary Ann Armstrong and June Saville were rehired as the site directors for MES and MMS, respectively, and Nerasha Payne was rehired as the full-time instructional assistant for MES. However, Durham said she still had to hire the entire rest of the staff on an extremely tight timeline.

“I think we hired a total of 20 people in about 2 1/2 weeks,” Durham said. “That was interviewing and processing, because they have to get physicals and (tuberculosis tests) and background checks and child abuse checks. All of that has to be done before they can start working with children.”

Since field trips aren’t currently an option, Durham said she had to come up with more programs and activities to occupy the children than ever before. She said she was able to fill at least two days a week with special guests, which she said was only possible with community support. The Murray Art Guild will be doing art projects at both sites, and MISD Digital Learning Coach Mechelle Morgan will be coming in a couple of separate weeks to lead some STEAM activities. Calloway County 4-H will be doing team-building exercises, and Murray High School’s basketball coach, Dior Curtis, will be doing a weekly basketball camp at both sites as well. The owner of Funky Monkey Pottery Company in Draffenville will be leading some activities, and Durham said Kids Co is also partnering with Murray State University and MHS’s Future Farmers of America (FFA) program to have a weekly agriculture day.

Durham said kids will also be participating in CCPL’s virtual summer reading program, as well as getting to check out books from the library’s mobile book drop. The Land Between the Lakes Nature Station will be doing a virtual program for the kids, and the Leadership Tomorrow class will be working on a reading program, she said.

Durham said parents and grandparents have expressed their appreciation that Kids Co is back, and some of the kids had such a good time on the first day that they were begging to stay longer when they were being picked up.

“You don’t realize what a vital part of the school system this program is until it’s not available anymore,” she said.

Since Durham started at Kids Co more than 20 years ago, she said she has had the pleasure of hiring former students to be teachers this year. She said it has been interesting working with new employees whom she remembers teaching when they were small, and it is has been fun to see them be able to remember what they most enjoyed about the program when they were younger and apply that background while working with today’s students.

“I could not have done it without the wonderful people that work at the board office,” Durham added. “(Superintendent Coy) Samons, Lou Carter, Whitney York, Debbie Walker, Sarah Kaegi, and Mechelle Morgan really supported me and helped behind the scenes.”