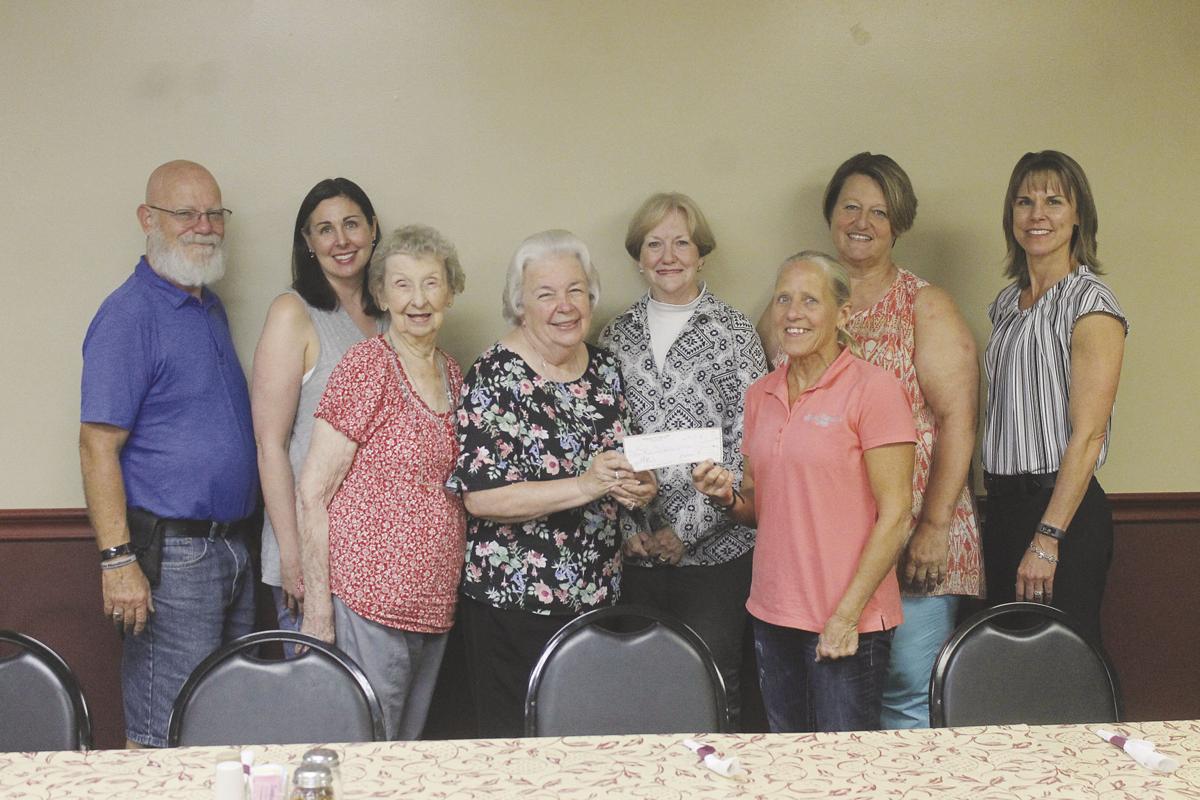 Donna Herndon, a member of the Angels Attic board, presents a check for $15,000 to Angels Community Clinic Executive Director Sherry Crittenden at Pagliai's Tuesday. From left to right are Mike Faihst, Jennifer Bryson, Effie Kemp, Herndon – who is also on the Angels Community Clinic board – Lou Pardy, Crittenden, Angels Clinic board chair Linda Cavitt and Amy Ferguson, public health director for the Calloway County Health Department. 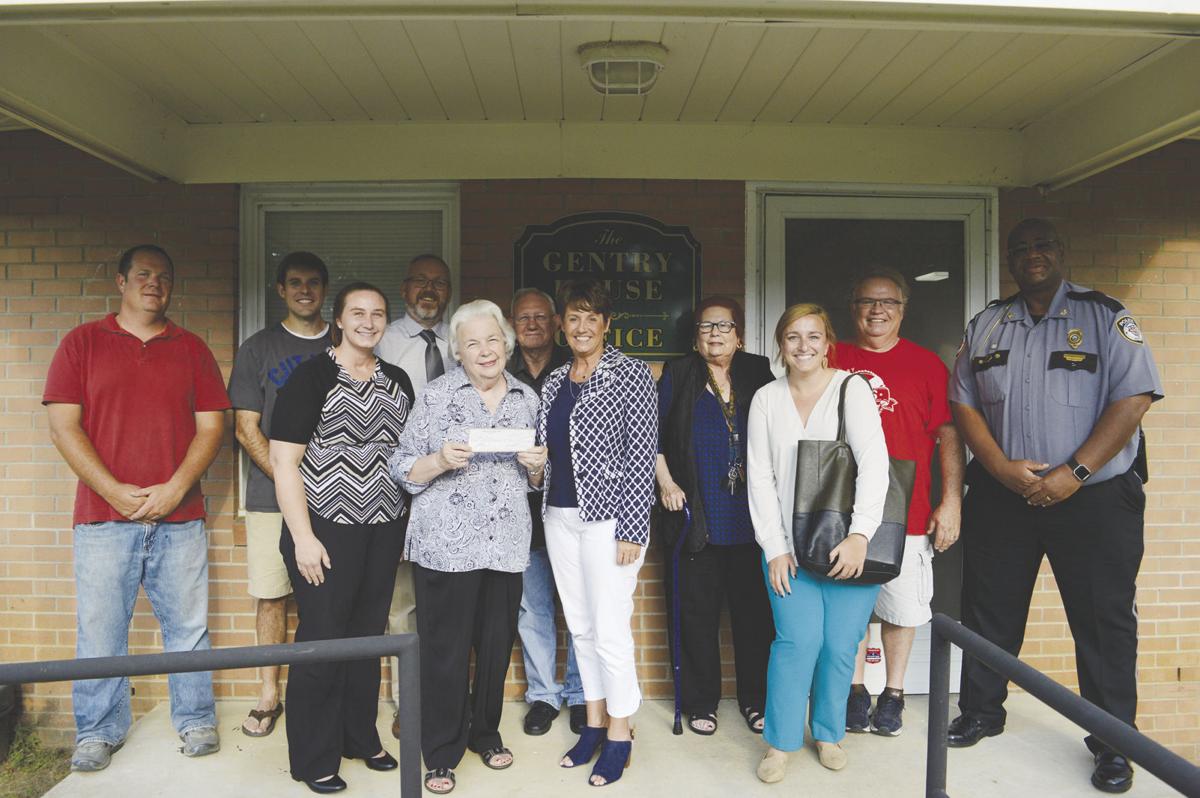 Donna Herndon, a member of the Angels Attic board, presents a check for $15,000 to Angels Community Clinic Executive Director Sherry Crittenden at Pagliai's Tuesday. From left to right are Mike Faihst, Jennifer Bryson, Effie Kemp, Herndon – who is also on the Angels Community Clinic board – Lou Pardy, Crittenden, Angels Clinic board chair Linda Cavitt and Amy Ferguson, public health director for the Calloway County Health Department.

The Angels Attic board donated $15,000 to each organization last week after each had submitted letters expressing a need for the funds. Angels Attic board chair Donna Herndon said it was sort of funny that both agencies were requesting the same amount, but it was even better knowing that the donations could be made following a very profitable year for the Attic.

“Angels Attic, thanks to (manager Mike Crook), has had a really good year,” Herndon said Thursday during the check presentation to Gentry House. “We had extended an invitation to (Gentry House Board President) Heidi Shultz, and also to a representative of the clinic to come to our last board meeting and make a presentation and make a pitch for any additional funds. Well, they were very successful requests; both the clinic and Gentry House requested $15,000. So both of the requests were honored.”

In its letter to the Angels Attic board, Shultz outlined a need to replace major appliances and two HVAC units for the units the nonprofit uses to provide its services. The letter said the housing units were originally constructed in 2003, and Gentry House had already needed to replace two HVAC units since 2016. The remaining two units will need to be replaced in the near future, the letter said.

“With an estimated need of $8,000 for the HVAC units, $4,000 for the washer/dryer sets, and $1,600 in ranges, a total cost of $13,600 is anticipated for the replacements,” Shultz said in the letter. “In addition, it is projected that there will be labor and other miscellaneous costs to pay to have the appliances installed and the old ones disposed of.”

Therefore, Gentry House had requested $15,000 in a one-time grant to meet the expected costs of the needed replacements. The letter also noted that Gentry House had already expended $20,000 in previous repairs to its four housing units.

In their letter, the Angels Community Clinic said it was requesting $10,000 for pharmacy and medical supplies. The letter cited an influx of students from Murray State University following the closure of its campus clinic as a factor in needing to ensure supplies were present.

Among the items listed in the letter were low supplies of insulin, inhalers and influenza vaccine, in addition to wound care and diabetic supplies. The clinic was also asking for $5,000 for dental prosthesis, with the letter saying the clinic wants to be able to fix a partial plate or provide dentures to qualifying patients.

With both requests being honored, both agencies expressed thanks for the extra assistance that comes on top of the monthly $4,000 a piece provided from Angels Attic. Sherry Crittendon, executive director for the Angels Clinic, said they were most excited to be able to offer expanded dental services for their patients.

“The biggest part that we are excited about is dental; it is going to help us with some dental prosthesis, which we haven’t done before,” Crittendon said. “This would be things like maybe fixing some dentures or fixing some partial plates that something has happened to. We have always been able to fix a cavity or pull a tooth, but we have never been able to replace anything. So this is big and that will be very nice. We have several people that are needing that.”

Crittendon said their patients have to qualify by being a Calloway County resident, low-income with no insurance. Patients also must have worked in the last six months or be a full time student.

“So they still have to meet those guidelines,” she said. “But if they qualify here, then we can offer those services to them. And we have plenty of room to have more patients; we just have to have them call and talk to us. We have lots of volunteers and lots of staff, so we are ready to go.”

Mike Crook, manager of Angels Attic, said that the good year involved some big hauls the store got over the recent year.

“We were blessed this year; we were busy but we were blessed,” Crook said. “We have done a lot of large pick-ups, and we did one at Scotts Air Force Base this year; we actually did six trips up there and got some really nice stuff. The overall donations across the board throughout the year were up and were more consistent.”

Crook said it was a wonderful feeling to be able to provide the extra boost to both agencies that already get help from the Attic.

“I like it a lot and I know our staff, volunteers and paid staff appreciate that,” Crook said. “They put a lot of work, a lot of sweat equity into what is going on. And it is very fulfilling to not only do what our mission is by what our budget amount is, but to make extra to be able to help these agencies in a very specific way is quite fulfilling.”