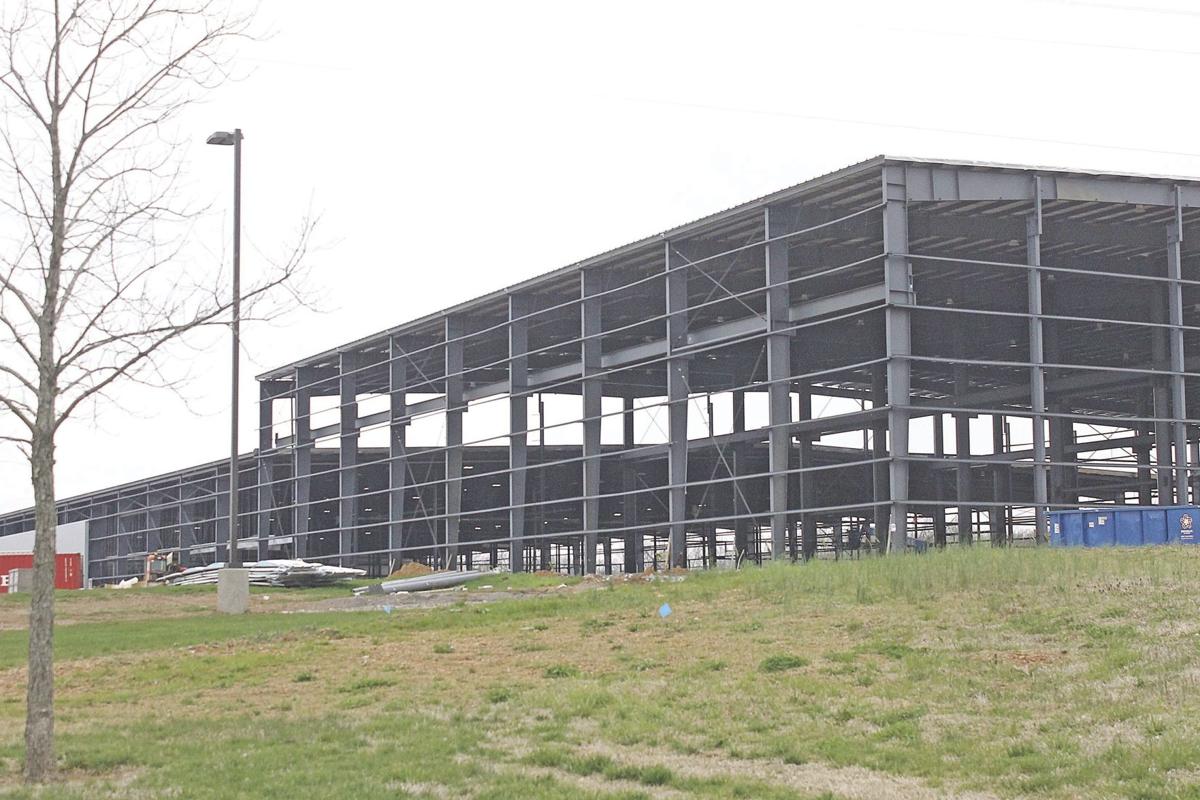 The DAE-IL plant at the Murray West Industrial Park appeared like this Friday morning in Murray. State economic development officials recently said that it is the establishment of facilities like these that motivate them to do their jobs each day. 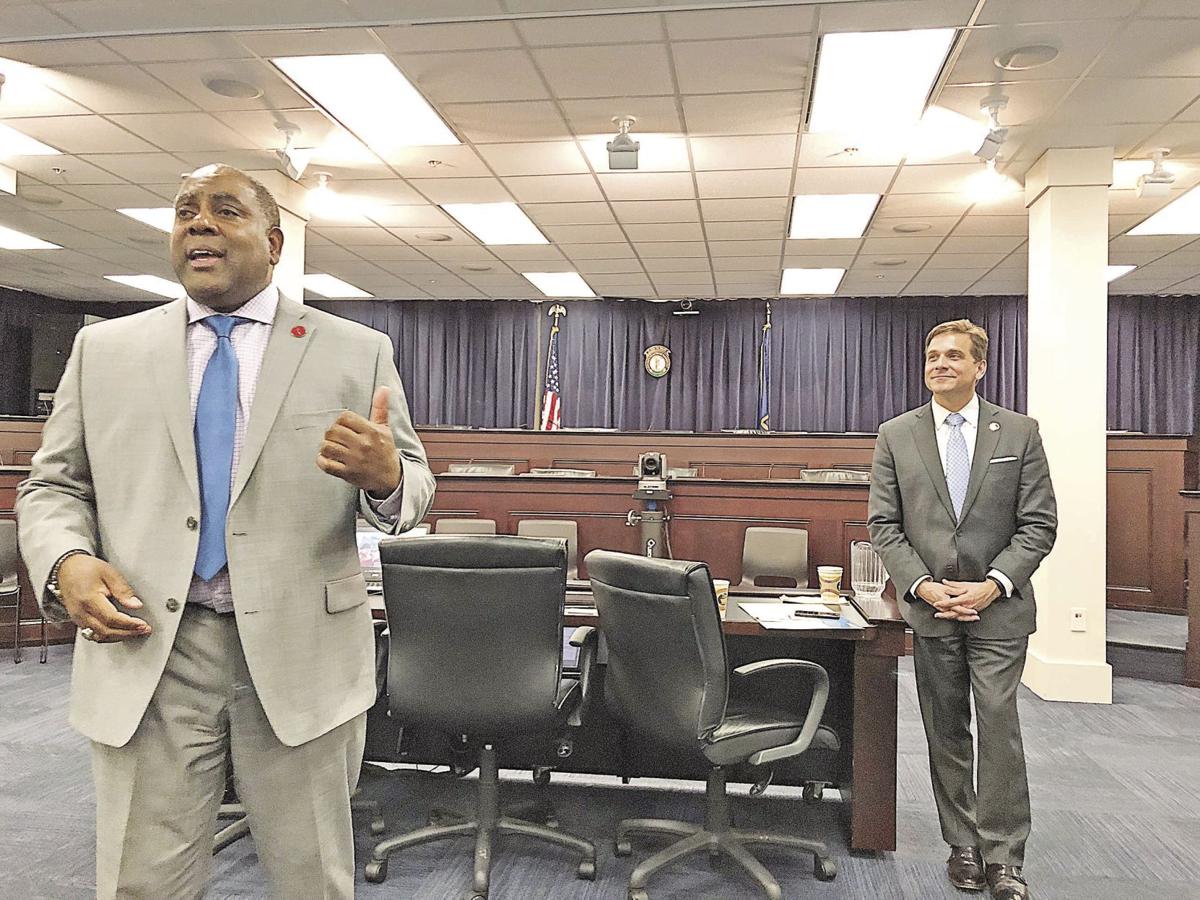 Erran Persley of the Kentucky Economic Development Cabinet speaks to a Calloway County group in February, while Vivek Sarin, also of the cabinet, right, watches.

The DAE-IL plant at the Murray West Industrial Park appeared like this Friday morning in Murray. State economic development officials recently said that it is the establishment of facilities like these that motivate them to do their jobs each day.

Erran Persley of the Kentucky Economic Development Cabinet speaks to a Calloway County group in February, while Vivek Sarin, also of the cabinet, right, watches.

FRANKFORT — One of the programs that was included in the schedule for the group that took part in the Calloway to the Capitol bus venture in February was a meeting with two officials from the Kentucky Economic Development Cabinet.

Vivek Sarin is the co-CEO and executive officer, while Erran Persley is the commissioner for the Department of Business Development. For the 25-or-so community and business leaders from Murray and Calloway County that attended the program inside one of the committee hearing rooms of the Capitol Annex that day, Sarin and Persley were familiar faces.

Both were in Murray last July for the announcement that the DAE-IL automotive parts manufacturing company would be establishing its first-ever American industrial facility in Murray. During the brief time they met with the Calloway group, one thing seemed to become clear: they live for that kind of day.

“To be honest, it’s quite an emotional thing,” Sarin said, remembering back to his thoughts on that July day. The main reception area of the spec building at the Murray West Industrial Park, where the plant is being constructed, was standing room only.

So when the Calloway group showed up the day before Valentine’s Day, Sarin said he was glad to see people from the farthest reaches of the commonwealth.

“Thank you for driving over here today. We are really grateful for your guys coming over here so we can give you a little taste of what we do,” Sarin said, then launching into his part of the program, which seemed to indicate that the Murray venture is only one of several his cabinet is helping cause to happen in Kentucky.

“We are just pedal to the metal right now and we take a lot of pride in out-hustling any economic development team in the world,” he said. “We speak the language of business, and when we’re sitting across from corporate decision makers, we feel we can get a ‘go’ answer quicker than anybody else.”

DAE-IL will be one of about 500 facilities in Kentucky with foreign connections. Those facilities employ about 110,000 people. Kentucky products are also valued overseas with $57.2 billion in exports recorded in 2017, a new record.

“Oftentimes, it’s like swimming up stream like a bunch of salmon, where we’re finding out who are the corporate decision makers and, oftentimes, we’re finding out that they are not local,” Sarin said. “They’re in other states or other countries, so we ask, ‘How do we swim upstream and find out from the corporate folks what they’re plans are, their future plans, their expansion plans?’ So we tell them about existing facilities in Kentucky that may be available, and another thing we’re doing is being receptive to any company coast to coast that is relocating.

“The full-court press is on in some areas of our own nation that may not be too business-friendly in telling our story.”

Persley, like Sarin, is a Kentucky native, having been raised in Bourbon County outside of Lexington. Sarin is from Louisville.

Persley credits Kentucky Gov. Matt Bevin with calling him back to his home state. Previously, Persley was in the administration of President Donald Trump as a foreign investment advisor for the U.S. Department of Commerce.

In talking to Bevin, though, he realized he had an opportunity to help his home state.

“My job in Washington was to look at growth investment across the country, so I got to see firsthand what (economic development organizations) did well and what they didn’t. I already had that information,” Persley said. “So one of the things we focus on is the concept of after care. In other words, you have a lot of areas that spend time attracting a new business to their community, but what they don’t do is take care of them while they’re here. Here in Kentucky, we need to make sure our business ecosystem goes all the way through.

“We’re saying to these companies that we go around the world to meet, ‘Once you settle in Kentucky, we want to help you get your permits, get your feet settled and, along with that, once you grow and develop, we’re going to continue to help you through the whole process to keep growing so you’re not going to eventually be saying goodbye and moving on to the next deal.’”

Persley also said the cabinet is a place where Kentucky communities can come to discuss recruiting strategies.

Sarin took it one step further.

“We want you all to know that we care a great deal about your state,” he said, directly addressing a sore spot with many in western Kentucky. “I don’t have any compartment for the politics that may have existed before our time (meaning western Kentucky was passed over for some opportunities, while the more populous ‘Golden Triangle’ of the central part of the state seemed to benefit). We don’t operate that way. Our model is we just want to delight the customer so they have a great experience and they’ll tell other people about us, and, by word of mouth, we’ll get more leads that way.

“You come from a region of the state where it is critical that we see development. Look at I-69 ( running through the Jackson Purchase)! How fun would it be to market your region with that? You have so many other things there, a university, such strength in agriculture, work force. It just fits.”