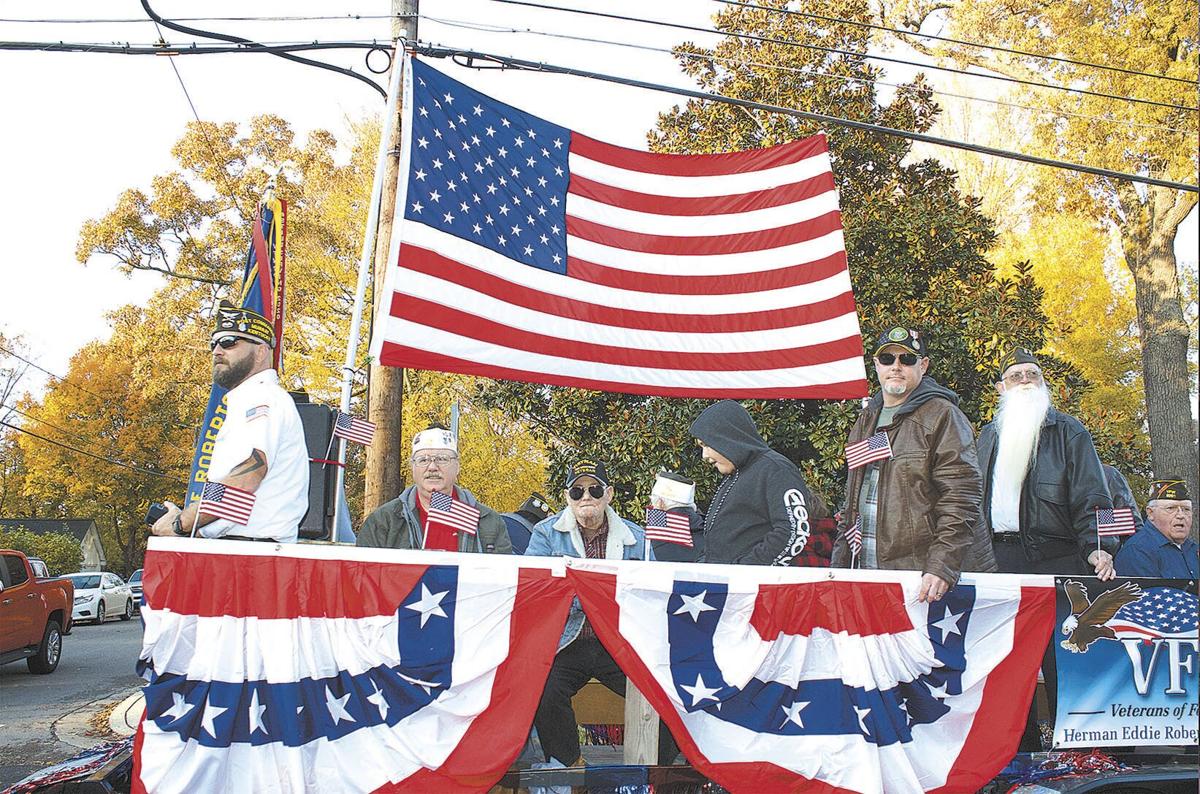 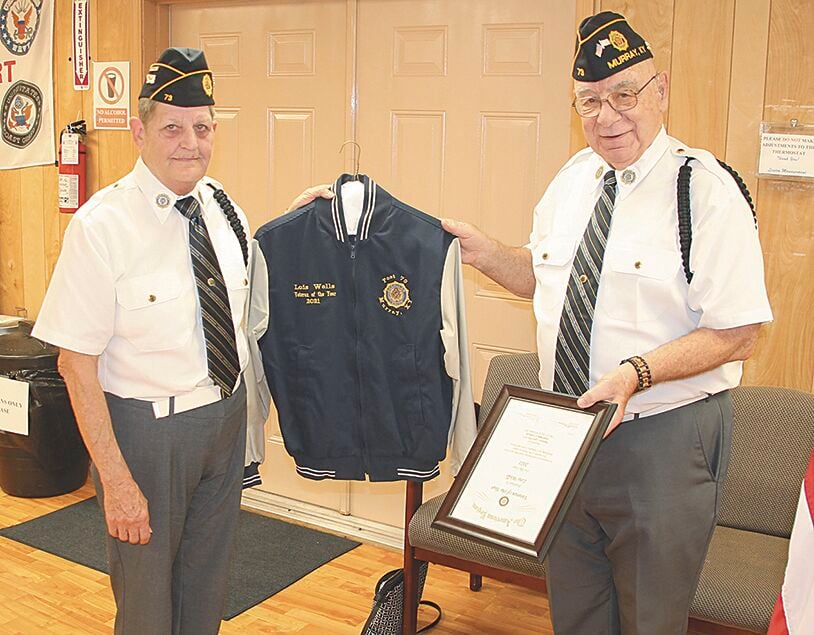 Billy Lane Lauffer American Legion Post 73 Commander Bill Cowan, right, presents Service Officer Lois Wells with a jacket and certificate Thursday honoring her as Veteran of the Year. George James was also named Veteran of the Year, but could not be present for the ceremony. 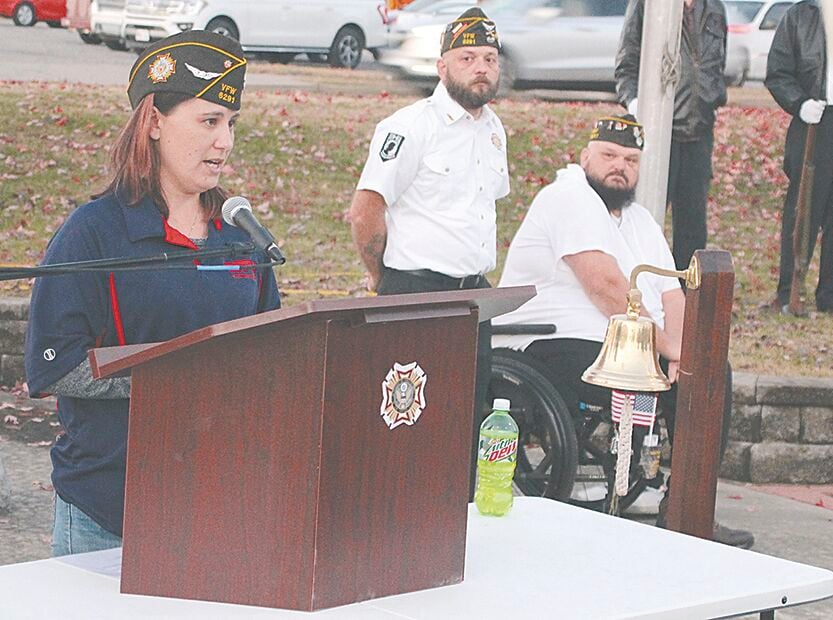 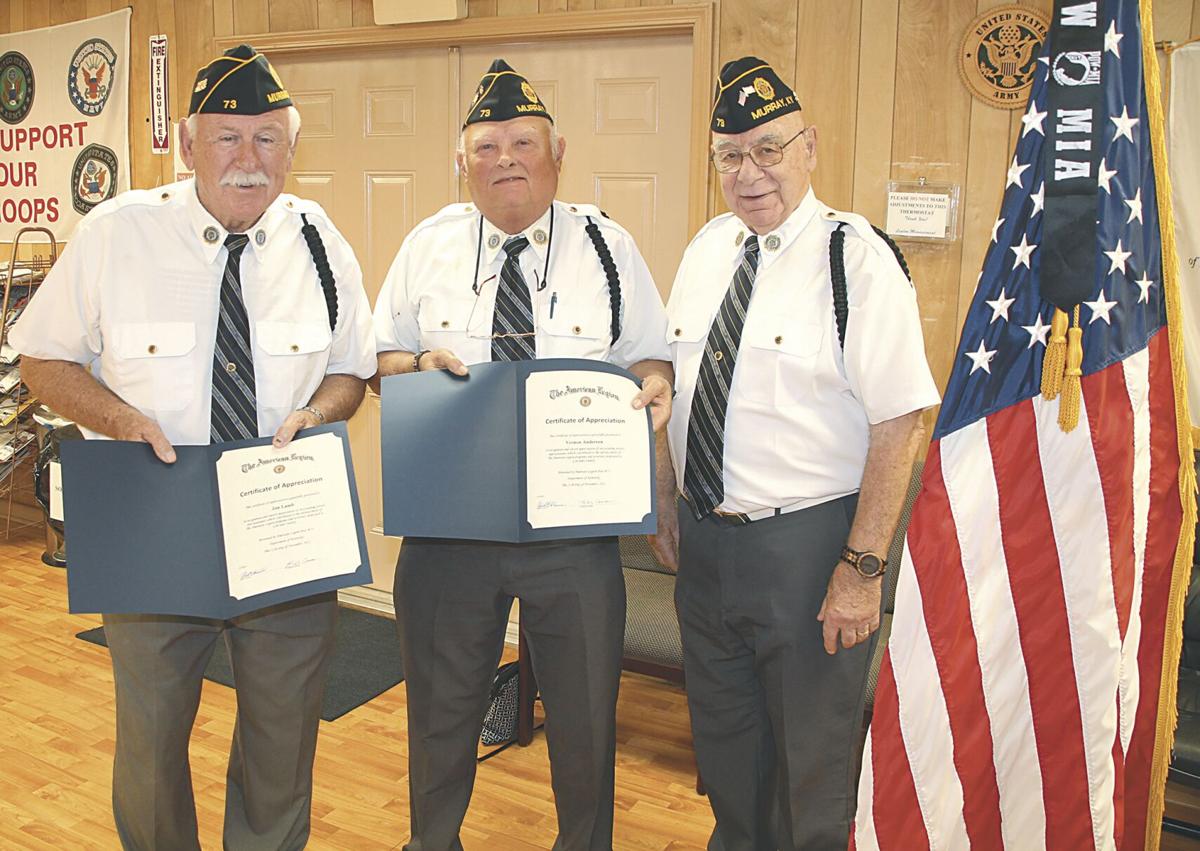 Billy Lane Lauffer American Legion Post 73 Commander Bill Cowan, right, presents Service Officer Lois Wells with a jacket and certificate Thursday honoring her as Veteran of the Year. George James was also named Veteran of the Year, but could not be present for the ceremony.

Bill Cowan, commander of the Billy Lane Lauffer American Legion Post 73, opened the post’s traditional 11 a.m. ceremony by reflecting on the 100th anniversary of the dedication of the Tomb of the Unknown Soldier at Arlington National Cemetery. He said that while the public most often associates the tomb with Memorial Day, it was dedicated on Armistice Day, Nov. 11, 1921. The idea for the tomb was initially inspired by the large number of unknown dead that had amassed by the end of World War I, and the first soldiers to be buried there were four unknowns who were exhumed from an American military cemetery in France, he said.

Post Chaplain Mike Nutter spoke about President Abraham Lincoln’s famous Gettysburg Address. The purpose of the speech was to dedicate the Soldiers’ National Cemetery where the Battle of Gettysburg was fought, and Nutter said Lincoln’s words honoring the sacrifices of those who died there “are as pertinent today as they were 158 years ago.”

Retired dentist Burton Young was one of the event’s featured speakers. Cowan said Young spent two years as an active duty dentist with the Army Medical Corps and another 18 years as a dentist for the Army Reserves, retiring as a lieutenant colonel. Young said that as he woke up Thursday morning and saw the dreary weather, he reflected on World War I soldiers fighting in foxholes and service members in other wars dealing with even more challenging weather. He said it didn’t seem like people did that much to honor veterans when he was growing up, but he was encouraged that much more recognition is given to veterans in the community now.

Young said he has great respect for anyone who has served in the military, but especially combat veterans for putting their lives on the line for their country and their fellow citizens. He said he is amazed at the number of tours of duty in which many younger veterans have served, and he is glad that the public now has greater recognition of the PTSD many of them deal with when they come back home. He noted that he was lucky to have not faced the same difficulties during his time in the military.

“We actually had 20 years of peacetime between when I went in (to the service) in 1975, two months after Vietnam was over, and 1995 when (I retired),” Young said. “I had a fortunate career, and I’m just proud that I was able to be a part of the military and help out in my own little way.”

Fred Ahrens, adjutant for the post, also spoke about his past service in the Air Force.

Before announcing two Veterans of the Year, Cowan presented Jim Lamb and Vernon Anderson with certificates of appreciation for their continued service. Cowan said they are faithful members of the Post 73 Honor Guard, regularly volunteer at Murray-Calloway County Need Line, raise money by working at the county fair and have cooked pork shoulders overnight for special fundraisers.

George James – who could not be present because he was receiving cancer treatment at Vanderbilt University Medical Center in Nashville, Tennessee – was named the first Veteran of the Year. Cowan said he had been a member of the Honor Guard for several years, drives the post’s van to Marion on a regular basis, helps at Need Line every month and “worked tirelessly at the county fair and went above and beyond clearing off of a large portion of our lot.” He also volunteered to serve as a delegate at the state convention.

Lois Wells was also honored as Veteran of the Year, and Cowan said she worked hours and activities similar to James, as well as serving as a service officer, specializing in women’s Dependency and Indemnity Compensation (DIC) claims.

“There is no suspense to this award because everyone knows who l am talking about, and I am sure that every person in this room agrees that Lois Wells has performed at levels this year that far exceeded what was expected of her,” Cowan said.

Murray’s traditional Veterans Day went through the downtown area and concluded at the Veterans Memorial at Chestnut Park, where the Veterans of Foreign Wars Herman Eddie Roberts Post 6291 held its annual ceremony.

“He served 20 years in the U.S. Army in two wars,” Brown said. “He served in World War II, and he would have served in Korea, but he got there a week or so after the peace agreement. And then he served in Vietnam, so we are very honored to have him here today. He was awarded two Purple Hearts, he was awarded a (combat infantry award for being) an expert shot. He also has a Cross of Valor and good conduct and numerous other medals and awards.”

Post Commander Ryan Buchanan thanked the crowd for coming, saying it is “always awesome when the community comes out and backs the veterans.”

“It’s an honor being out here in front of everybody and not just to honor the veterans within the VFW, but to honor all the veterans within Calloway County,” Buchanan said. “I didn’t prepare a big speech and I didn’t plan to say a whole lot, but as we move forward today recognizing the veterans throughout the community, I just ask that everyone keep every veteran – not just here in Calloway, but throughout the world and those still deployed and on active duty – in your hearts and prayers today.”

The event’s main speaker was Janice Maynard, whom Buchanan said is the post’s youngest female member. Maynard first spoke about the origin of Armistice Day, which started in 1919 after President Woodrow Wilson proclaimed Nov. 11 as the first commemoration. She also spoke about how the first women to serve in the U.S. Armed Forces served during World War I. She said that in the spring of 1917, men were not enlisting in sufficient numbers as the U.S. was preparing for the inevitability of war.

“On March 19, 1917, Navy Secretary Josephus Daniels determined that women could be enrolled in the U.S. Naval Reserve Force and issued an order authorizing their enlistment,” Maynard said. “A few days later, permission was granted to enlist one woman. Loretta Walsh was asked if she would enlist in the Naval Reserve Force as a chief yeoman. She immediately agreed. On March 21, 1917, after procuring and modifying a male chief petty officer’s uniform, Loretta Walsh made history by enlisting in the Naval Reserve – the first woman to officially enlist in the military, and also the first female chief petty officer.

“As a female veteran, I take honor and pride in knowing that women make up 14.6% of the total military forces currently, and there are more than 1.8 million female veterans. This might seem small compared to the men; however, we still will carry similar burdens as men. Even still, as a female veteran, I feel no different from those who stand next to me or around me that have also served our country.

Before he sang a song, Brown said he joined the Air Force as a young man when the economy was “rough” and he needed to provide for his family.

“But what I soon found out is that when you join the military, no matter what the reasons are that you joined, you soon find out why you’re really there, and it changes who you are for the rest of your life.”