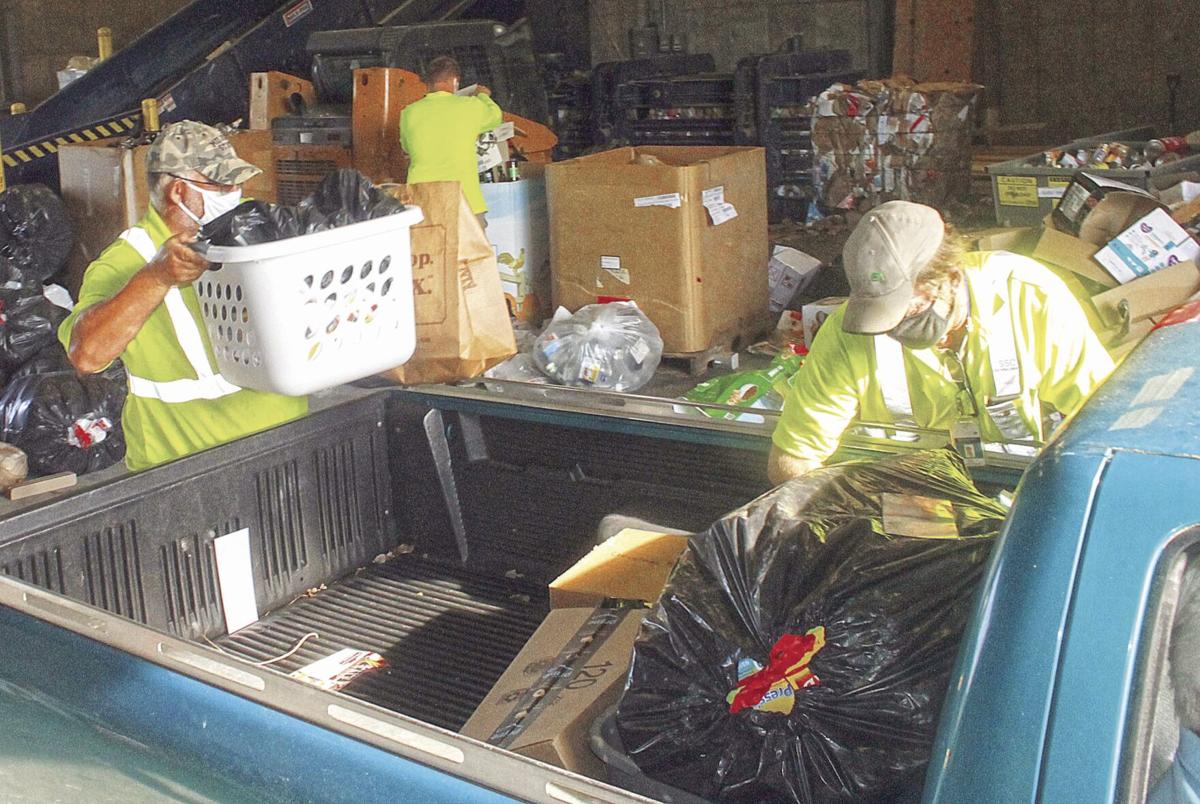 A team of workers remove recyclables from the bed of a pickup truck Saturday morning inside the recyclables collection facility at the North Farm on the Murray State University campus. 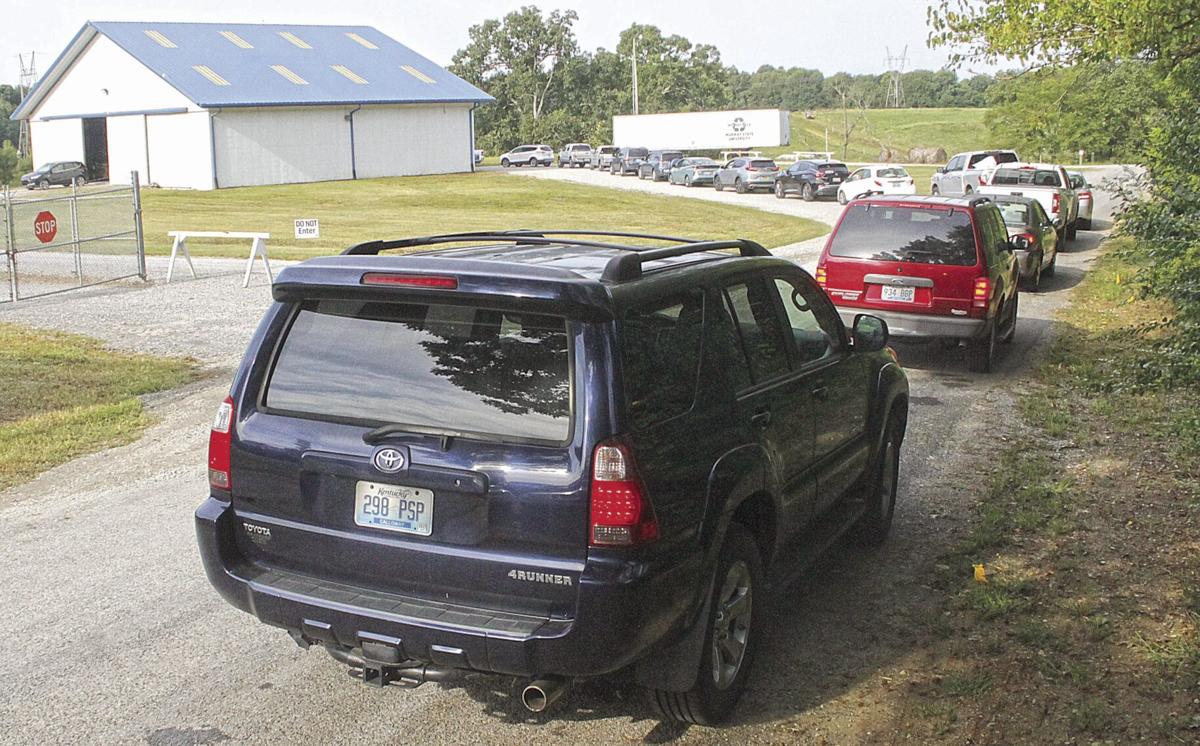 A long line of vehicles heads toward the recyclables collection area Saturday morning on the Murray State University North Farm.

A team of workers remove recyclables from the bed of a pickup truck Saturday morning inside the recyclables collection facility at the North Farm on the Murray State University campus.

A long line of vehicles heads toward the recyclables collection area Saturday morning on the Murray State University North Farm.

MURRAY — Residents who brought loads of recyclable materials to a Murray State University facility Saturday were overjoyed to once again have a place bring such items.

And Murray State Director of Facilities Management Jason Youngblood said Wednesday that he believes the event, while being a bit more busy than previously hoped, was a positive for everyone involved. However, he said there are still a few details to discuss before the North Farm facility is submitted as a possible permanent option.

“My main concern is making sure that the amount of materials that come in that we have to actually pay to have hauled off is offset by the material that we are paid to take,” Youngblood said, noting that statistics have not been tabulated on those fronts from Saturday. “We were busy, but we were trying to limit the advertising on this event so we would not be overwhelmed and I’ve talked to the guys a couple of times since the event (the last on Wednesday afternoon) and they said they weren’t really ‘overwhelmed’ but they had more than they were expecting.

“I think for our typical community days (which were being hosted the first Saturday of each month before the pandemic hit the community in March) we had three people to work it. This past Saturday, we had seven or eight and we probably could’ve used a couple of more. The fortunate thing, though, is that we didn’t have to shut it down, and I had told the guys before the event that, if they got overwhelmed, they could go ahead and shut it down, which is something we didn’t want to do.”

This event was also being monitored by members of the City of Murray Recycling Workgroup, which has been charged with looking at options to offer residents not only the rest of this year but on into the future. The Murray State event was a point of strong discussion the past two meetings of the group, as the city seeks a possible alternative to its 24-hour drop-off facility on Andrus Drive, which has become a financial liability.

City of Murray Street and Solid Waste Manager Ron Allbritten has told the workgroup on multiple occasions that the Andrus facility would have cost the city about $70,000 this year. It has been closed since late March. The official reason was the pandemic, but discussions during the workgroup meetings seem to indicate the closure also was financially related as well.

Pat Seiber, who is the co-chair for the workgroup, did not go to Saturday’s event, but her husband, Scott, did as he took a large load of recyclables the couple has accumulated this year to the North Farm.

“Our kids and grandkids came into town so I sent Scott out there and he went bright and early and said he was really happy with it,” Pat said of her husband, who may have been one of the first participants to arrive at the North Farm. “He got there early, but he said, as he was leaving, it looked like it was going to be a pretty good-size crowd.

“I had a little trepidation about this because (the workgroup) were hoping that Murray State’s recycling day would help take the pressure off of reopening Andrus Drive, which I think it does as long as they can do it once a month.”

Youngblood said plans are for another collection day to be hosted at the North Farm on the first Saturday of October. Youngblood said that the event this past Saturday had originally been intended as a campus-wide event, not necessarily for people outside of that community. However, he said word did reach a social media site, which made limiting the participation basically impossible.

“(Volunteers) lost track of how many cars after about 30, and that was early in the day. So we still have no idea how many we had. It was a big turnout, though,” he said.

As for the participants, the feeling was overwhelmingly positive.

“I think it is marvelous,” said Elle Christopher of Murray as she sat in her vehicle as volunteers emptied her trunk. “I hope they continue to do this once a month. I think this is what we have needed for a long time. You can tell from the line of cars.

“I appreciate what they’re doing out here and I hope they prosper too.”

Youngblood said several large boxes were filled Saturday, and that was probably due to so many people having accumulated a large amount of such things as plastic bottles, glass, paper, cardboard and metal cans. Ron Churchill of Murray said that described him.

“This (trunk full) has been piling up at home a long time,” Churchill said Saturday.

“I’m very excited about this and I’m grateful that Murray State is willing to do it,” said Doris Cella of Murray as she waited for her vehicle to be unloaded. “I hope they continue, but we also need curbside recycling, so we’re hoping to see that in the near future as well.”

Youngblood also said that he will be anxious to see how much volume will be received in October. He said it could be a situation where another large group of vehicles comes to the North Farm but, after unloading so much material this time, not as much will be brought for the next event.

Burton Young, who is the other co-chair of the workgroup, said he hopes Saturday was the beginning of a new chapter for recycling in the city.

“If (Murray State) would be willing to do it, that would be great. It would save the city a lot of headaches with Andrus Drive,” Young said. “Many of these same people (who have taken materials to other events, including the Bill Wells Make a Difference Day), they’re kind of like a little fraternity. They really get in there and do it. I don’t think they care where they take it, as long as they get it recycled.”