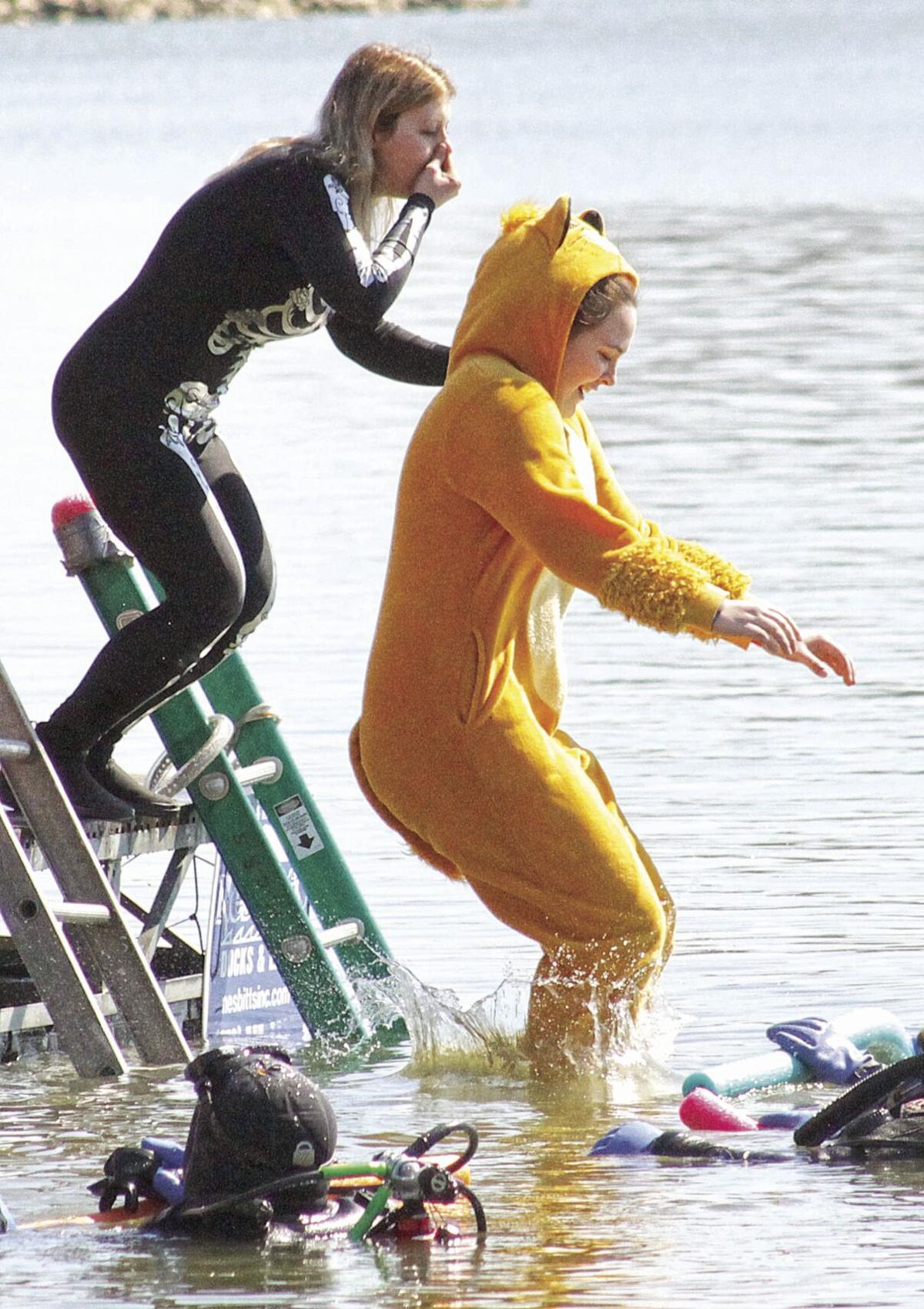 Calloway County High School student Makinzie Underhill more than justified the wearing of her costume last year as she showed the heart of a lion by braving the cold waters of Kentucky Lake to successfully take her first leap in the Western Kentucky Polar Plunge at Kentucky Dam Village State Resort Park in Marshall County. 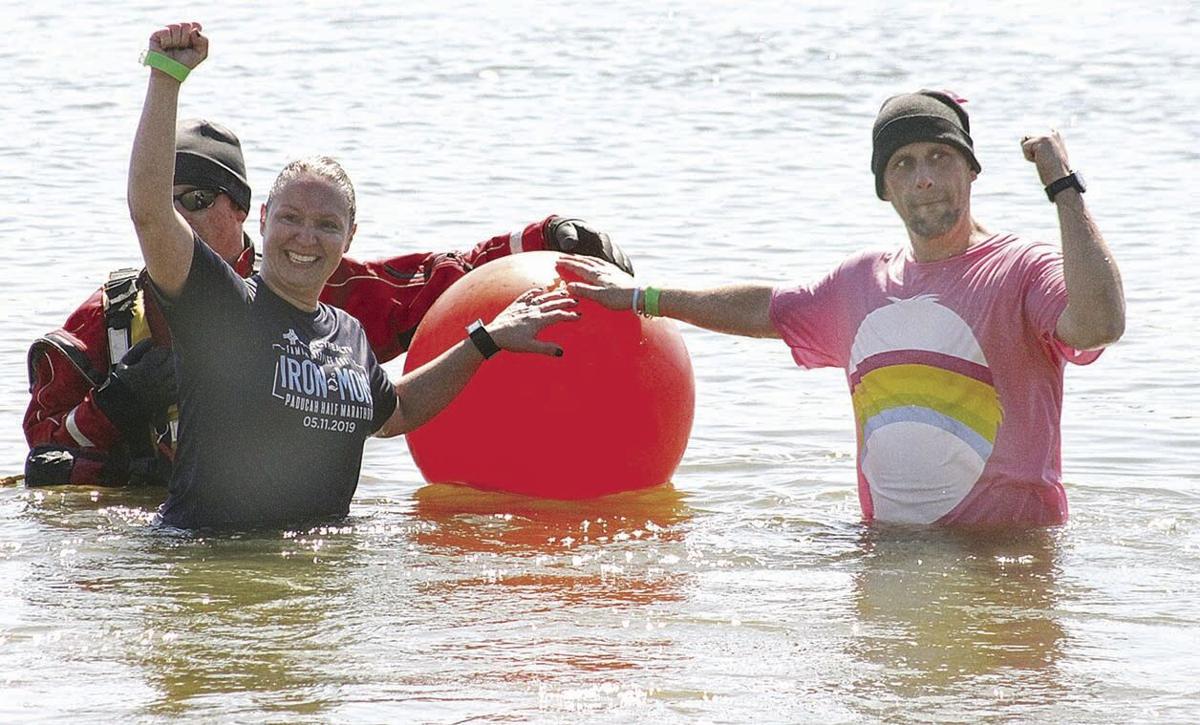 Calloway County High School student Makinzie Underhill more than justified the wearing of her costume last year as she showed the heart of a lion by braving the cold waters of Kentucky Lake to successfully take her first leap in the Western Kentucky Polar Plunge at Kentucky Dam Village State Resort Park in Marshall County.

MURRAY — COVID-19 has put the brakes on many activities the past year, but organizers of one western Kentucky tradition are finding a way to not let it prevail.

The Western Kentucky Polar Plunge that raises funds for Special Olympics programs is scheduled for March 6 at Kentucky Dam Village State Resort Park in Gilbertsville. The concept is pretty simple as participants commit to raising money for Special Olympics, then jump into a lake on a winter day.

In this case, it is Kentucky Lake into which the participants will leap, or, if they choose, enter from the Old Beach area at the park by running into the water. This option was created two years ago to give anyone not wishing to become submerged a way to still show support for the cause.

“We are going to do it live and in person and we’ve been working with the Marshall County Health Department and they approved our COVID plan,” said Laura Miller of Murray, the Area 1 coordinator for Special Olympics Kentucky. “The main difference is that we won’t have our typical opening ceremony (usually conducted inside the park convention center). We’ll just stream that live on social media.

“The other difference is that we’re going to assign plunging times so that everyone won’t be arriving all at the same time as we’ve done in the past. That way, we’ll eliminate having large numbers of people.

“With everything going on (with the pandemic), we’re hoping this will be a nice and refreshing way to focus our energy and our social media energy as well to flood the area with good stuff. Hopefully, this will be a nice positive reprieve from some of the negativity we’ve unfortunately been seeing out there and we’re really excited. We think it’s going to be a great event. (Marshall County Health Department Director of Public Health Billy) Pitts feels real good about our event, that we’re taking it seriously and we’re going to be able to offer something that’s safe, and that it’s outdoors also.”

Along with the water-related activities, the day also will feature a 5K road race, which became part of the program about five years ago. With the addition of the 5K, as well as the run-in option for the plunging portion of the event, organizers created the Triple Crown for participants who believe they can handle all three activities.

There will also be some COVID-19-related changes to this part as well.

“We normally plunge five at a time from the dock but we’re thinking we may plunge four at a time so we can make that six-foot difference and they’re a little farther away from each other,” she said. “Also, where we normally have the next five waiting right there (in a line near the dock) means that they have to pass one another as the other five are leaving the dock, so we’ve thought about realigning things a little bit. Everybody is going to be masked, of course, and we’ll have places for them to put their masks too because they’ll be going right back on their faces when they’re done.”

Prior to the plunging and running events, the opening ceremony features the presentation of numerous awards, as well as the always-popular costume contests for teams and individuals who are participating in the day’s activities. That is not happening this time, at least the usual way.

“We’re still going to try to have the costume contest,” Miller said of how it appears this event is going to take a page from activities that were exhibited during the Campus Plunge on the Murray State University campus in the fall, not just with the costume contest, but also with the Too Chicken to Plunge participants who pay a donation when they are not brave enough to face a brisk dip in icy water.

“We didn’t have anything live like we usually do there (where participants gather in the university’s Quad and use a tall rubber slide that leads to a watery ending). Instead, we had people get real creative with it (by filming their activities and submitting them to social media). Some did water balloons. Some of the Murray State golfers jumped into one of the water hazards at their golf course. Some of the tennis team hit water balloons, so there were lots of things people did to get really creative and have lots of fun with it.

“That’s what we’re hoping will happen with (the Polar Plunge) and that we’ll even have people maybe do things at home if they want.”

The Plunge website, which is available at the site of Special Olympics Kentucky — www.soky.org — went live in late December. The goal is $100,000. More information is available on the event’s Facebook page.