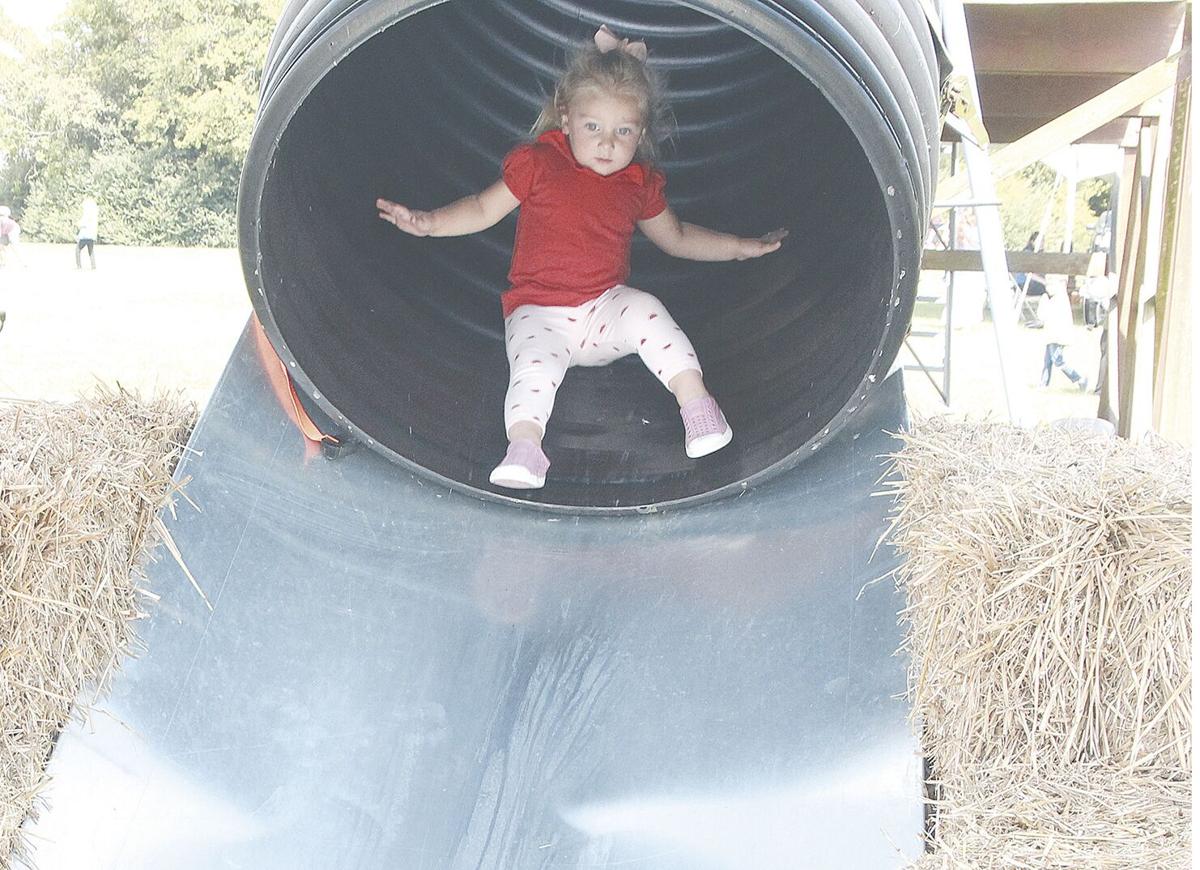 Two-year-old Hollyn Riley of Murray slides down one of the barn slides at Fall on the Farm Saturday. She came to the event with her grandmother, Kelly Paschall. 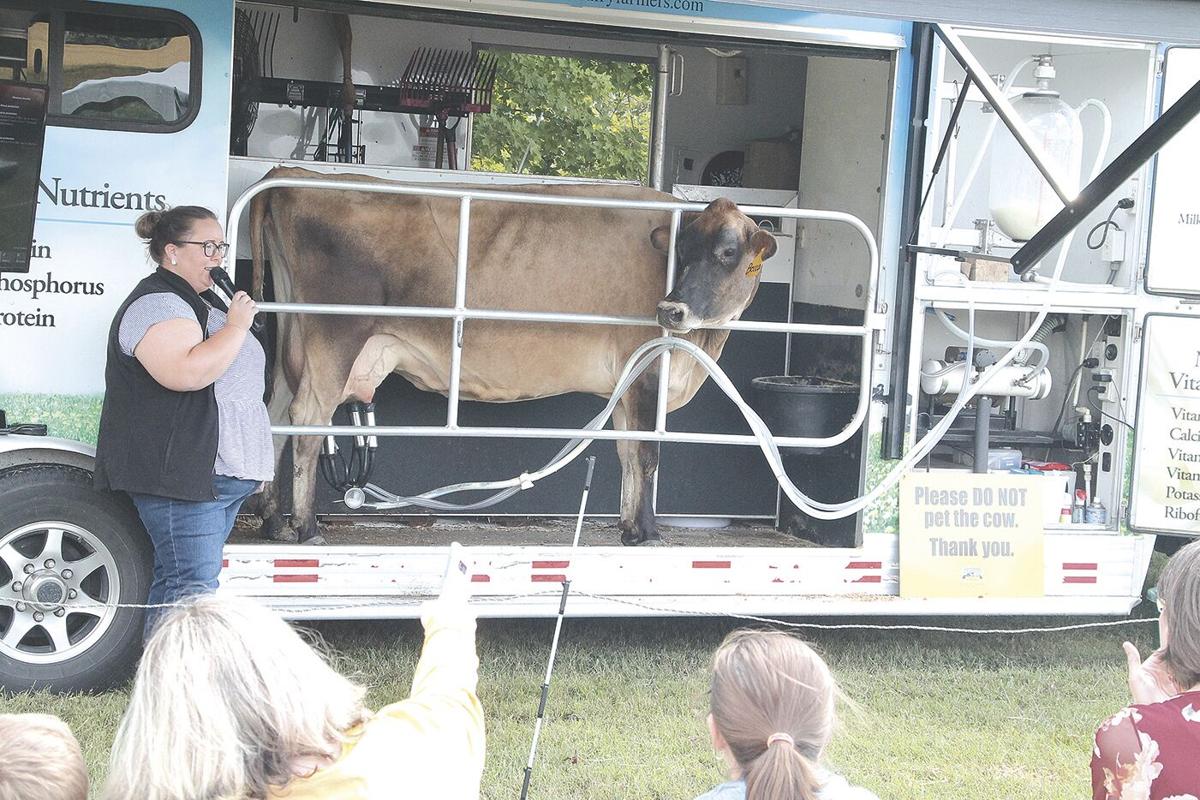 Haley Fisher with Southland Dairy Farmers demonstrates how a milking machine works with the assistance of Becca the cow during Saturday's Fall on the Farm event. 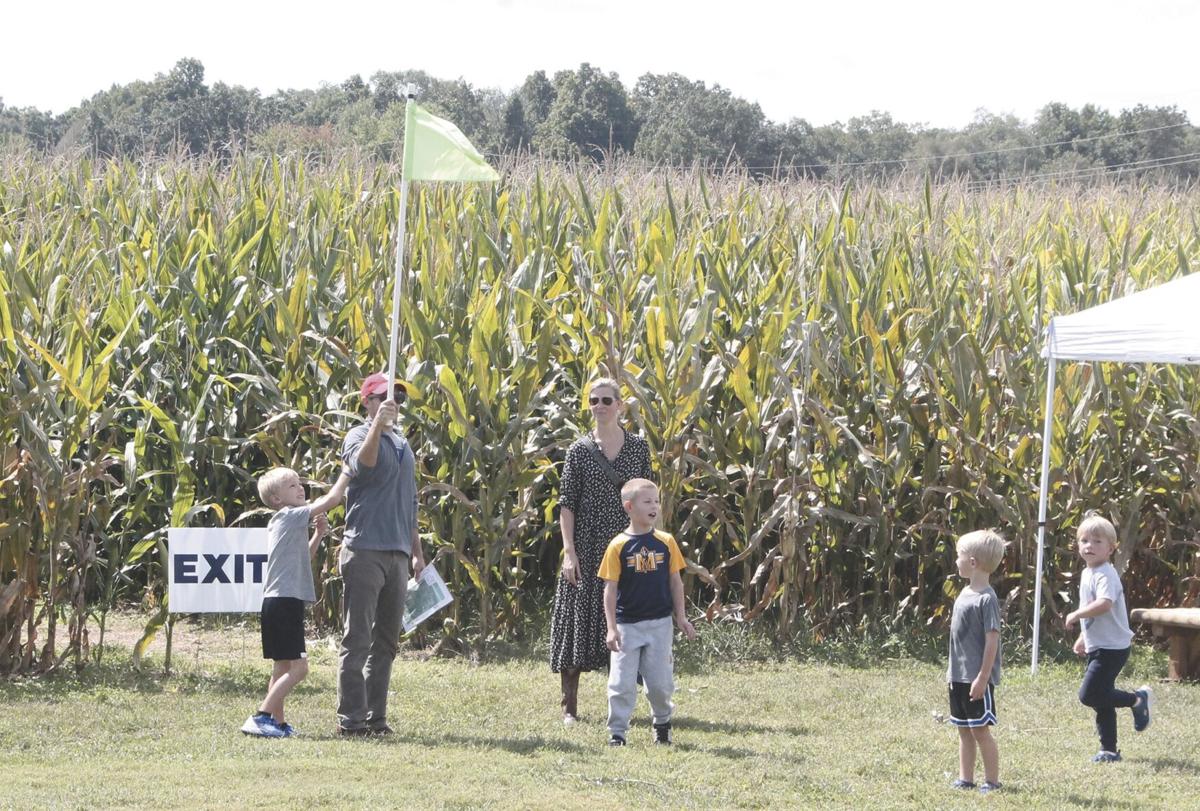 Families going through the corn maze at Fall on the Farm were given flags so they could wave them if they became lost and needed assistance from a Murray State student watching from a deer stand. 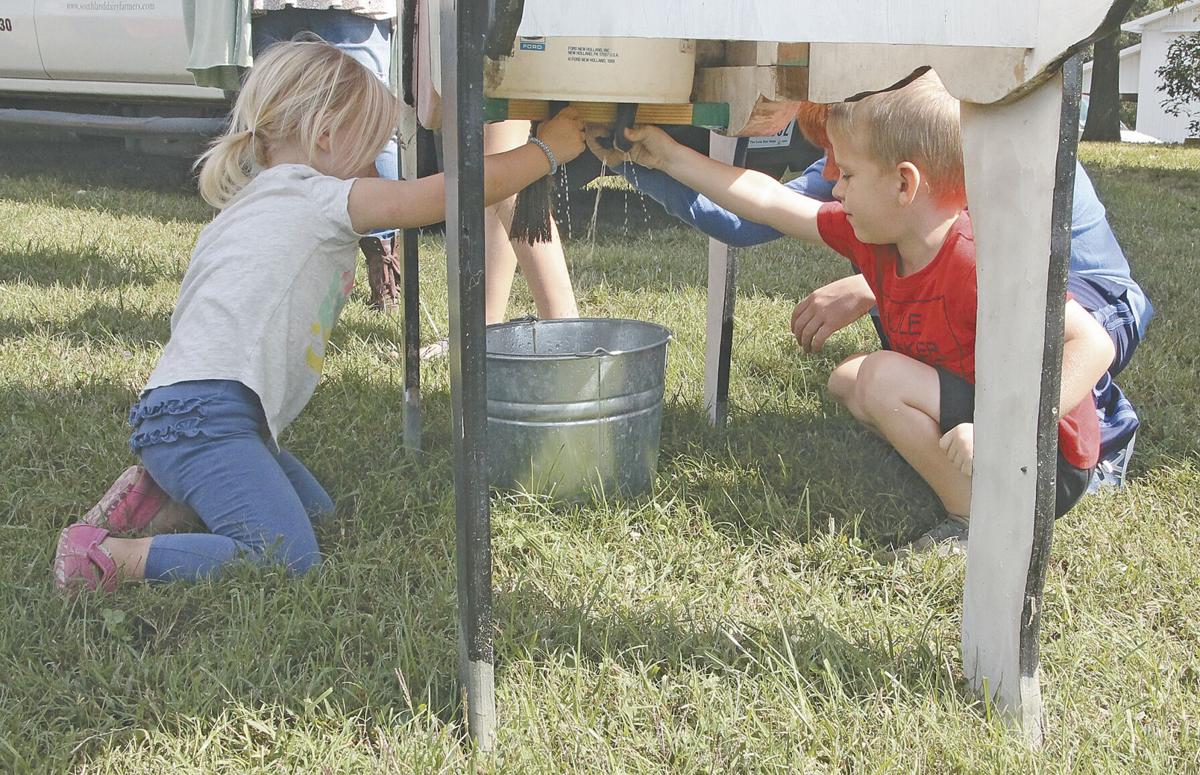 Although kids didn't get to milk the real dairy cow on the scene, many of them enjoyed trying their hand at milking the rubber utter of the wooden cow that is at Fall on the Farm each year.

Two-year-old Hollyn Riley of Murray slides down one of the barn slides at Fall on the Farm Saturday. She came to the event with her grandmother, Kelly Paschall.

Haley Fisher with Southland Dairy Farmers demonstrates how a milking machine works with the assistance of Becca the cow during Saturday's Fall on the Farm event.

Families going through the corn maze at Fall on the Farm were given flags so they could wave them if they became lost and needed assistance from a Murray State student watching from a deer stand.

Although kids didn't get to milk the real dairy cow on the scene, many of them enjoyed trying their hand at milking the rubber utter of the wooden cow that is at Fall on the Farm each year.

MURRAY – Families were excited to come back to Murray State University’s Fall on the Farm Saturday after the Hutson School of Agriculture and the Agriculture Leadership Council canceled it last year because of COVID-19.

This year was the 17th iteration of the annual event, which is held at the Mabel G. & J. Stanley Pullen Farm and raises money for scholarships. It is sponsored by Hutson School of Agriculture and hosted by the Agriculture Leadership Council. Rhea Ann Holland, academic services coordinator for the Hutson School of Agriculture, said she has been in charge of Fall on the Farm since 2006, and she was happy to see the community welcome it back on Saturday with such enthusiasm.

“It’s been great. Good crowd,” Holland said. “We heard (some disappointment last year) and then there were lots of excited people when they heard it was going to be back open this year.”

Holland said there were several logistical reasons the event had to be canceled last year, as well as university policies related to health and safety protocols. With more studies conducted over the last year showing that outdoor activities – especially those where people are spread out – are relatively low-risk, the event was well-poised to make a comeback this year.

“I’ve seen some very enthusiastic families,” Holland said. “There were lots of kids who were here earlier in the week (on school field trips) dragging mom and dad back, saying, ‘Come on, let’s go! This way, this way!’”

Dr. Tony Brannon, dean of the Hutson School of Agriculture, said he was proud to bring the event back to educate children about agriculture while also showing them a great time.

“Neither rain, nor drought, nor hot nor cold shall stop the essential field of agriculture,” Brannon said. “The same can almost be said of Fall on the Farm. In 17 years, we’ve only missed two years for rain and one year to pandemic. This year, we were excited to be back with scaled-back schools and safe and healthy outdoor activities on Thursday and Friday and a near-normal crowd on Saturday. We served the schools and community while also returning much-needed funds for our Hutson School of Agriculture clubs and organizations. We would like to thank our community, our students and especially Rhea Ann Holland for all their hard work to make this a success. And thanks to my wife, Lisa, who had a great idea almost 18 years ago. We will be back again next year.”

Presley Woodrum, a senior agricultural communications major from Liberty, is the chair of the Agriculture Leadership Council. She said she loves seeing the joy on the children’s faces as they go from station-to-station experiencing all the event has to offer. Kids got to play on two barn slides, ride pedal tractors, climb on a large John Deere tractor, make their way through the corn maze, learn about dairy cows, check out drones used for aerial agriculture photos, race rubber ducks using water pumps and more.

“It allows us to really be able to interact with the community, which is something that I really love and value,” Woodrum said. “Agriculture is something we’re all very passionate about, so to be able to teach local students more about agriculture is very important to us, as well as just interacting closer with the faculty that are there. It’s just really a place to make memories. I think it ran very smoothly this year, and honestly, we are all super sad when we didn’t get to have it last year, so it’s wonderful to have it back.”

Dr. Alyx Shultz, professor and head of the department of agricultural sciences, said everyone at the Hutson School of Agriculture was delighted to welcome the public back on Saturday.

“We missed it; we’ve been out for a year, so it’s great to be back and great to see everybody out and running around the farm,” Shultz said. “We’re so glad we had just the perfect weather day and we just really want to thank everybody for coming out and supporting our students. The money all goes back to the students for scholarships and the active learning that we do, so it’s great to bring it full circle.”

Shultz assisted children with digging and planting in Mabel’s Garden, named for Mabel Pullen, who donated the farm to the university upon her death in 1995 at the age of 95. While she worked at that corner of the farm, her own children – 8-year-old Scarlett, 7-year-old Addy and 2-year-old James – were also having a great time.

“They’re having a blast,” Shultz said. “They love the pumpkin painting, they love the puddle ducks, they love it all. And Addy was super excited to see the milk cow demonstration. I don’t think she’s ever (watched) milk cows. We (raise) pigs, but that’s very different.”

Braylee Finck, an agriculture business major from Maroa, Illinois, said she transferred to Murray State this year, so this was her first Fall on the Farm.

“I came from a little junior college in Illinois, Lincoln Land Community College,” Finck said. “It’s been pretty fun (helping with Fall on the Farm for the first time), and this is actually one of the bigger ag events that I have done. It’s been very eventful, and I’ve seen a lot of different things. I (previously) helped with some mums, I helped do a little succulent tent for the Horticulture Club, and now I’m helping with the corn maze. It’s been really fun. I’m loving it and I’m having a great time.”

Britney Springer of Hazel said her children, 9-year-old Kael and 5-year-old Leyona, had come to Fall on the Farm for school field trips when they were in preschool and kindergarten, and they were very excited to have it back this year. Leyona came on Thursday with her class from Southwest Calloway Elementary School, but Springer said she was eager to come back. Kael said he most enjoyed the corn maze, the cows and the barn slides.

Kelly Paschall of Murray was there with several of her grandchildren, including 2-year-old Hollyn Riley, who enjoyed repeatedly going down the barn slides.

“My husband (Terry Lynn Paschall) graduated from Murray State with the agriculture department, so since this is put on, we decided we would bring the kids out,” Paschall said. “Last year, they were too young (if the event had been held), but this year they’re old enough and they’re enjoying every part of it. We’re having a great time and it’s beautiful weather and everything.”

Andrea Schornak and Billy Cunningham of Benton brought their 8-year-old son, Hayden, and their 4-year-old niece, Riley Hendershot. Schornak said Hayden had been looking forward to it all week.

Kevin and Bryn Spangler of Murray brought their three children – 10-year-old Owen, 8-year-old Paisley and 7-year-old Declan – who were all quite disappointed when the event was canceled last year.

“They were very disappointed (last year),” Bryn said. “It’s just nice that it turned out to be such good weather. It’s beautiful and it’s nice to see people out and about again.”