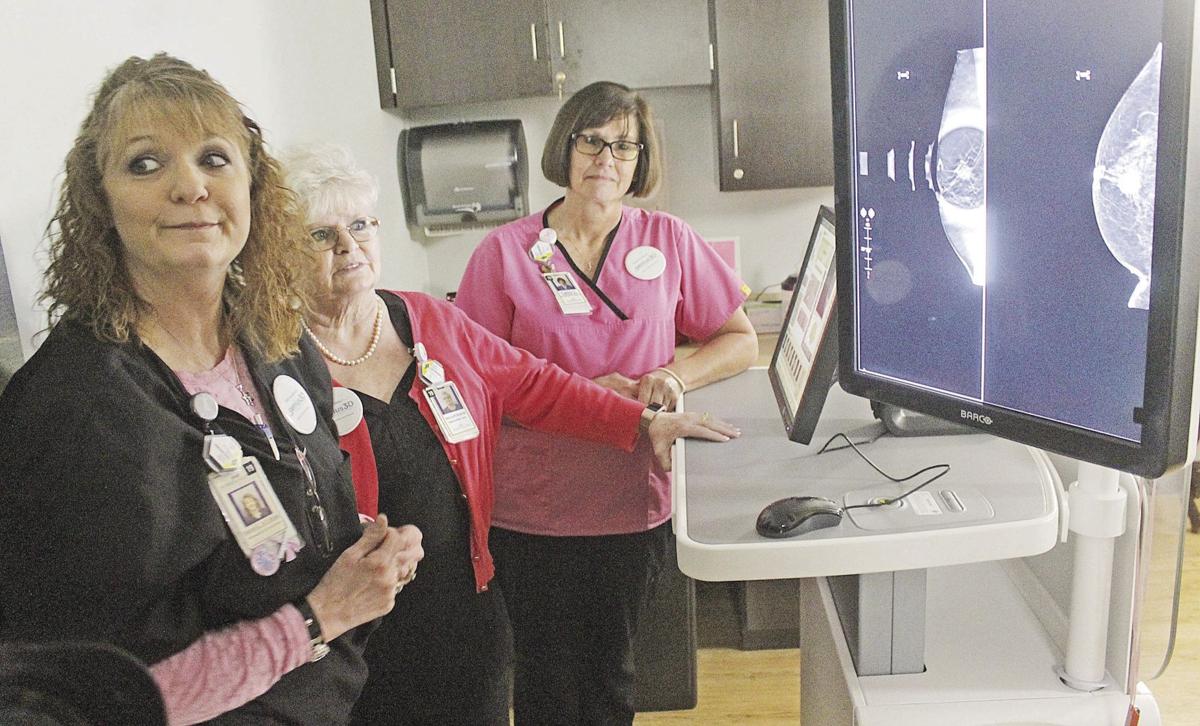 Murray-Calloway County Hospital Mammography Coordinator and breast cancer survivor Sharon Carter, left, listens to a question from a visitor Thursday during the grand opening of the hospital's 3D mammography technology. Also pictured are radiology technicians Gerry Arnett, middle, and Cathy Seay as they demonstrate how the new machine can obtain much clearer images because of its ability to cut the breast into slices, peeling away layers previously not penetrable. 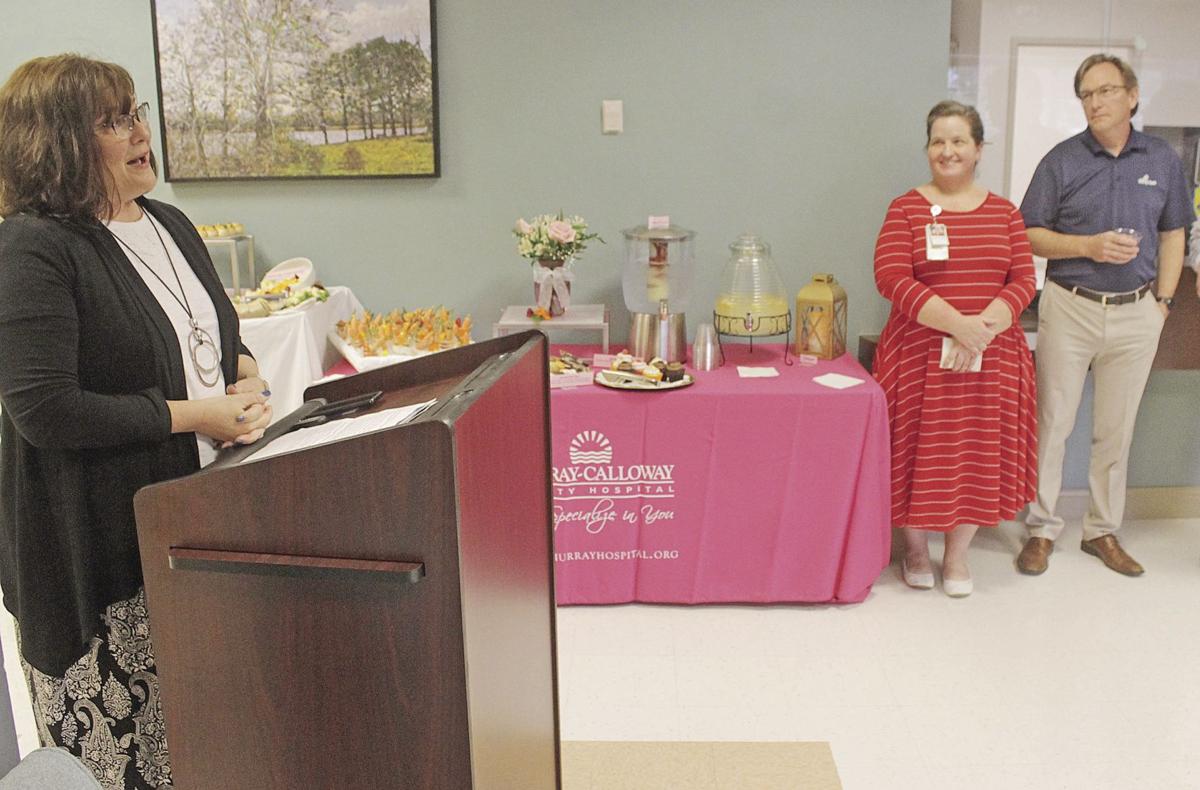 Murray-Calloway County Hospital Mammography Coordinator and breast cancer survivor Sharon Carter, left, listens to a question from a visitor Thursday during the grand opening of the hospital's 3D mammography technology. Also pictured are radiology technicians Gerry Arnett, middle, and Cathy Seay as they demonstrate how the new machine can obtain much clearer images because of its ability to cut the breast into slices, peeling away layers previously not penetrable.

MURRAY — When it comes to early detection of breast cancer, Lisa Shoemaker of Murray seems like the perfect candidate to testify about it.

She is a two-year survivor of the disease and came through it without major side effects, thanks to not having to undergo chemotherapy or radiation treatments. However, while she was one of the “lucky ones,” she recognizes that this is definitely not the case for everyone.

That is why Shoemaker, a six-year member of the Murray-Calloway County Public Hospital Corporation Board of Trustees, was glad to speak at Thursday’s grand opening of the 3-D mammography technology that arrived in Murray about a month earlier. It is a weapon that Murray-Calloway County Hospital now has that can make that early detection available to more patients.

“I was one of those anomalies. I had no history, no health factors, no symptoms, I felt no lumps, but I had breast cancer,” Shoemaker said. “My story is just one example of why early detection is important. And as a single mom, being sick wasn’t an option for me. I had to take care of my kids.”

However, of all of the chapters to Shoemaker’s breast cancer story, she said the hardest involved the wait between the initial mammogram examination and the call that “everybody dreads.”

“The biggest thing for me is that (the new 3D technology) reduces the number of callbacks, and I’m here to tell you, that worst part was the waiting time between that first call (for her to come back for a second mammogram) and the second one (confirming the diagnosis) and finding out whether I was going to have to have a biopsy and that I, in fact, had cancer,” she said. “Reducing that stress is going to be a huge advantage to the ladies of our community.”

MCCH Director of Radiology Heidi Hordyk said that, with 3-dimensional mammography, 10 percent out of every 100 exams will result in a call back, with six of those being told they have no cancer detected, which is much lower than with 2D.

However, call backs or not, the main thing the 3D will do is find the disease at earlier stages.

“Out of 1,000 mammograms, we would typically diagnose two to seven breast cancers. Now, we’re going to add an additional one or two, so I know that doesn’t sound like a huge number, but it does when it impacts you and your family. If we can detect it early, it’s about a 100 percent survival rate, so that is our goal here at MCCH, to diagnose early, which makes treatment much easier.”

Hospital CEO Jerry Penner gave a brief history of the path taken to obtain this new technology. He started with MCCH Chief Philanthropy Officer Keith Travis, who helped launch the “Because She Matters” campaign in 2015. His wife, Joan, is a breast cancer survivor as well.

“It was Keith Travis and a whole bunch of others who worked hard for this and with the support of donors, about 500 of them, they raised a quarter million dollars,” Penner said. “Now, I’m telling you a quarter million didn’t pay for everything we did. The board invested about $1.2 million to make this a reality for you as well.

“Now, why is that important? I counted this room before I started my speech and saw that were 24 women in this room. Three of you, based on stats, will have breast cancer. And I don’t have to say that because there are at least three of you in this room who I know are breast cancer survivors and, to Lisa’s point, she had no symptoms. Well, eight out of nine women are going to have no history whatsoever, eight out of nine, and be diagnosed. You say, ‘But Jerry I’ve heard if you don’t have any history or risk factors you don’t get it,’  well forget about those statistics. That’s just how it is today.”

Penner also put the capabilities of this new technology into a layman’s understanding.

“Image what it’s like looking through a cloud. Now, with 2D, the cloud got in your way. With 3D, it doesn’t matter if the cloud is in your way or not, because you’re going at it from a different angle. Then, when you consider women with very dense breasts, you look into that cloud and you still have a 40 percent better chance of finding an invasive cancer, 40 percent chance!” n