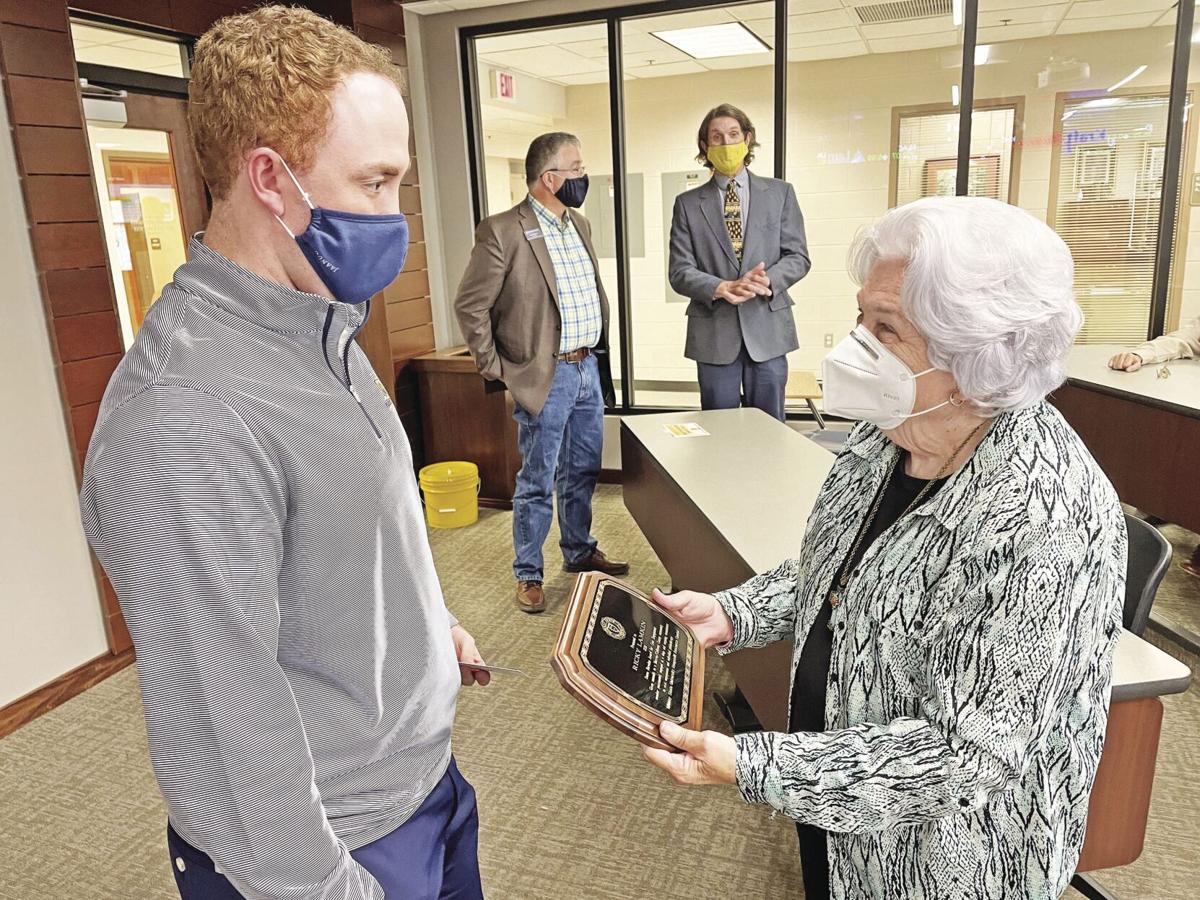 Donna Herndon looks at Adam Lamkin after asking to view up close the plaque for the inaugural Donna Herndon Award for Civic Engagement Friday afternoon on the Murray State University campus. Lamkin accepted the award on behalf of his late father, Ricky. 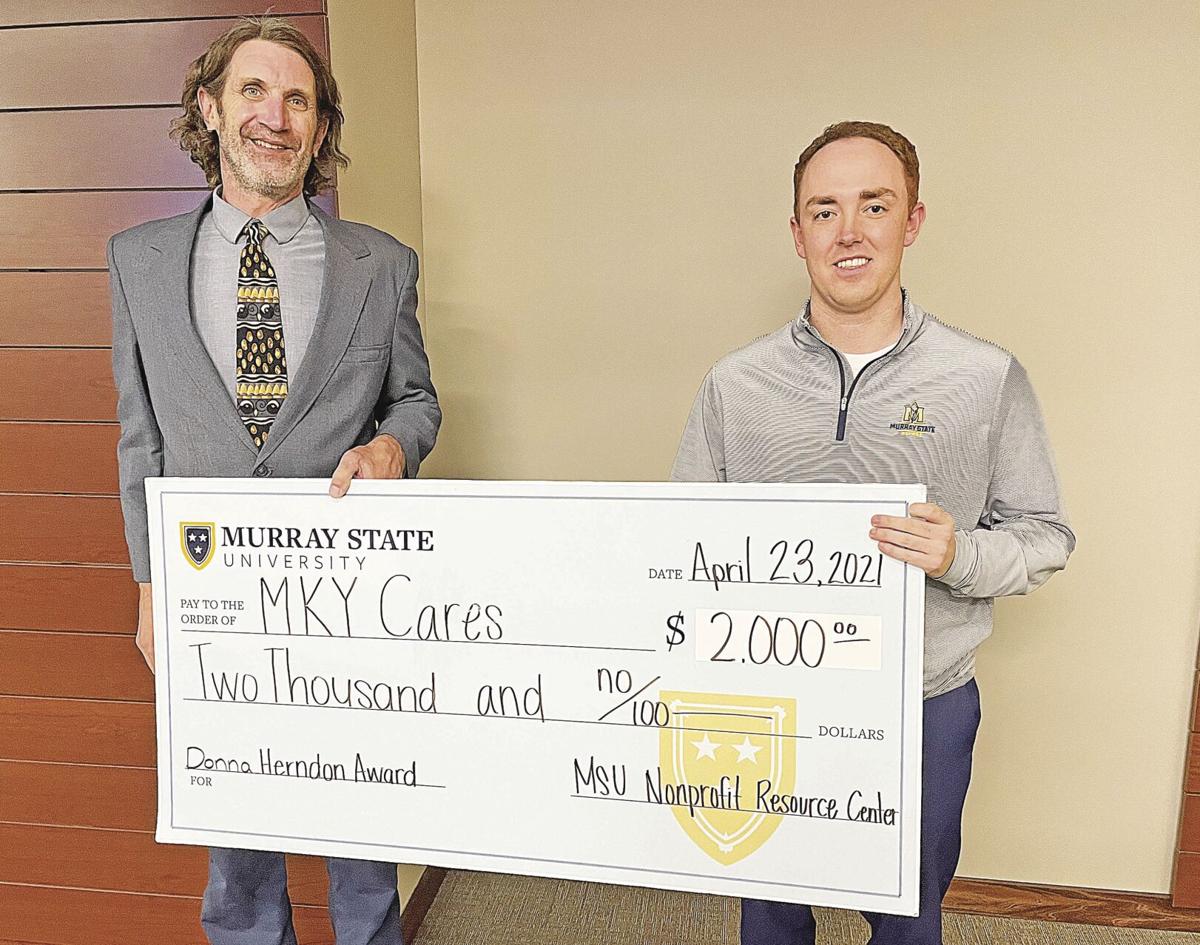 Mike Gowen of the Murray State University Nonprofit Resource Center, left, stands with Adam Lamkin Friday afternoon and a $2,000 check that is going to MKY Cares for Lamkin's father being named the inaugural recipient of the Donna Herndon Award for Civic Engagement. Ricky founded MKY Cares as part of his immense involvement in community causes.

Donna Herndon looks at Adam Lamkin after asking to view up close the plaque for the inaugural Donna Herndon Award for Civic Engagement Friday afternoon on the Murray State University campus. Lamkin accepted the award on behalf of his late father, Ricky.

Mike Gowen of the Murray State University Nonprofit Resource Center, left, stands with Adam Lamkin Friday afternoon and a $2,000 check that is going to MKY Cares for Lamkin's father being named the inaugural recipient of the Donna Herndon Award for Civic Engagement. Ricky founded MKY Cares as part of his immense involvement in community causes.

MURRAY — Appropriately, at the conclusion of Philanthropy Week Friday on the Murray State University campus, two people renowned for this idea in Murray and Calloway County were recognized at the same time.

The university’s Non-profit Resource Center announced the Donna Herndon Award for Civic Engagement in honor of a woman who has made giving of her time and treasure to others a basic art form. Friday, the award that is named for Herndon was presented to its first recipient, Ricky Lamkin, a longtime Murray attorney who, sometimes in a more public fashion, others more quietly, was involved in numerous community causes before his death in October 2019.

“This award is being presented to Ricky Lamkin and there’s a reason for that. It is in memory of a life of service, service on a level that is kind of hard for many of us to understand,” said Dr. Bob Long, the interim director of Murray State’s Non-profit Leadership Studies program and a man who has also made his mark as far as helping various causes in the community. “Everywhere you went, he was there, probably working alongside Donna a lot of those times, but he never met a challenge that he wasn’t excited about being involved in. Hard work … difficult issues, exciting work … positive issues … it didn’t matter. He wanted to be there.

“What I remember most is this enthusiastic energy he had that made an activity positive and lifted spirits of everybody in really difficult times. He wasn’t just a visible leader. There was a certain side to this story that most of us don’t know. He did an awful lot of it anonymously and those who kind of knew the work he was engaged in kind of knew he was involved in contributing his time, treasure and talents, but it was anonymous. He wanted the attention to be on the mission, the commitment on the work.

“I find that to be a rare creature and, unfortunately, our species is flawed with ego and, too often, we want the attention. I’d much rather be in the back of the room.”

Herndon was in attendance and was able to witness Lamkin’s son, Adam, accept this first award for his father.

“Obviously, I wish he was here so that he could accept it on his own behalf, but I’m very appreciative to accept this for him,” Adam said, then going on to reveal that the $2,000 that goes with this honor will be going to MKY Cares. “He was so instrumental in founding this nonprofit. MKY Cares is basically a third party that distributes funds to various charities throughout our community and I feel like these funds would be good for that.

“Last year, we got shut down (by the COVID-19 pandemic) right when we were about to do our fundraisers, so these funds will help us get started on this new year.”

It was also a time for some members of the audience to pay tribute to Herndon for her work over the years.

Mike Gowen, who served as the event’s emcee, is an instructor with the outdoor recreation track of Nonprofit Leadership Studies. He opted for a quote from Donna’s late husband, Woody, who was more known for his quiet demeanor as opposed to Donna’s high-energy style. Though he died in June 2017, his words rang loud Friday.

“Someone asked about his life and he said that, ‘A lot of people collect stamps or collect photographs. My wife collects people,’ and that quote summed up Donna Herndon for me,” Gowen said. “She’s collected everyone in this room (the newest and most state-of-the-art classroom in the campus’ Business Building) and we’re so thankful for that.”

“Donna does collect people and I am one of those people she collected a long time ago,” said Murray State President Dr. Bob Jackson, who talked of how he learned lots of valuable lessons as a student ambassador in 1983 and again in 1984. Herndon was the director of alumni relations at that time. “She’s a great mentor and has been a great friend to me and my family ever since.

“I mean this from the bottom of my heart. Knowing her for this many years, there’s not a kinder, more gracious, giving human being on the face of the earth.”

Herndon’s efforts have resulted in some very high honors locally, across Kentucky, as well as the nation. A few that Jackson listed included Kentucky United Way Volunteer of the Year in 1993, Rotary Club of Murray Humanitarian of the Year in 1994, Murray-Calloway County Chamber of Commerce Citizen of the Year in 2000, Sigma Sigma Sigma Woman of Distinction in 2007 (her sorority as a Murray State student) and the Kathie Gentry Lifetime Achievement Award in 2010. She has also founded or been part of numerous boards and organizations locally.

“One of my friends once asked, Donna? What do you do for fun? You don’t golf. You don’t play cards. You don’t fish. You don’t bowl.’ I thought, ‘Well, I guess their definition might be different from mine,’” Herndon said as she made remarks in front of several Murray State officials, as well as officials from the City of Murray and Calloway County governments.

“Of course, Woody was so sick (the result of cancer believed to have been caused by exposure to Agent Orange during the Vietnam War) we couldn’t travel. Our last trip was in 2005, but we found a blessing in that it gave us more money to do things that could make a difference in the lives of others and better our community, and that’s where we found joy. Maybe that’s not the same definition of fun that others might have, but that was what was meaningful to us.”

She said her faith in God and lessons learned from within her family about how to treat people to always help others in need have driven her desire to be so involved. She also said that a day in 1958 during her sophomore year at Murray High School also was a strong influence.

“I had (assistant football) Coach Dub Russell as a teacher. I don’t even remember what he was supposed to be teaching that day, but I do remember that he told us, ‘If you don’t leave the world a better place for having been in it, you have to pay the rent for the space you took up,’” she said. “That has stuck with me because it is consistent with the values I was raised with.

“I claimed God’s promise in Luke 6:38 that says, ‘Give and it will be given to you. A good measure, pressed down, shaken together and running over.’ It would take me all day to tell you the many ways that has played out in my life.

“God has given me many opportunities to serve others, giving of my time, my talents and my treasure. But, beyond that, He has surrounded me with people who have inspired me, encouraged me and worked alongside me in everything I’ve done.”