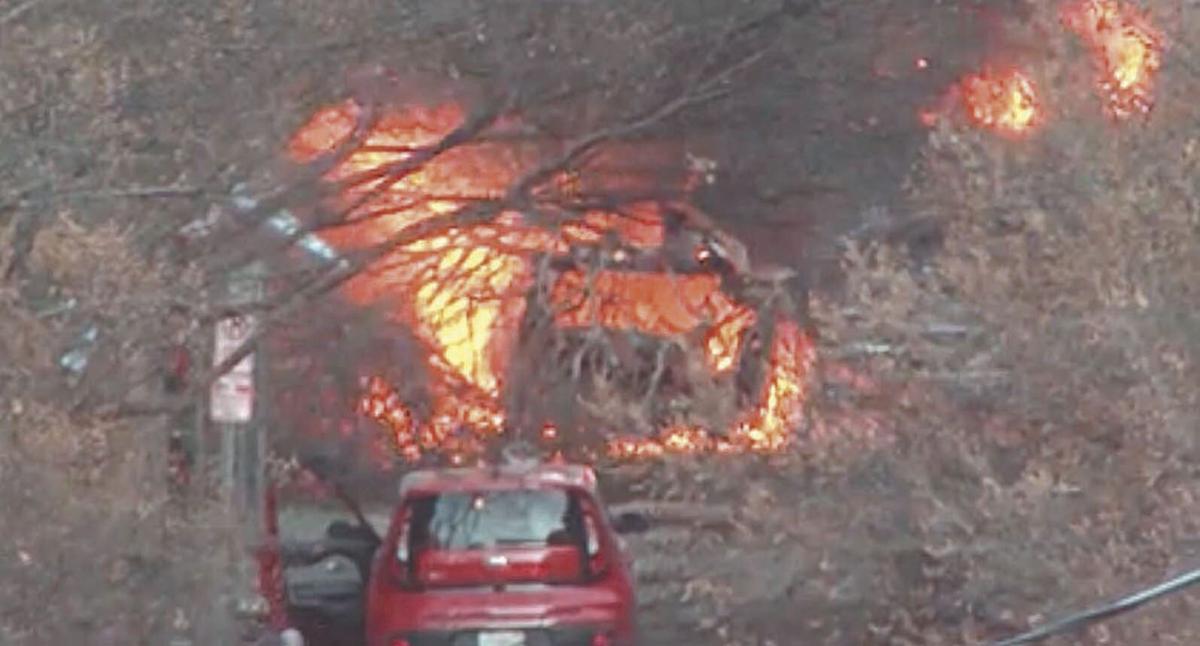 This screenshot was captured from raw video of the Christmas Day explosion in downtown Nashville, Tenn. A local family had been preparing to visit friends in the area before news of the explosion caused them to change their plans. 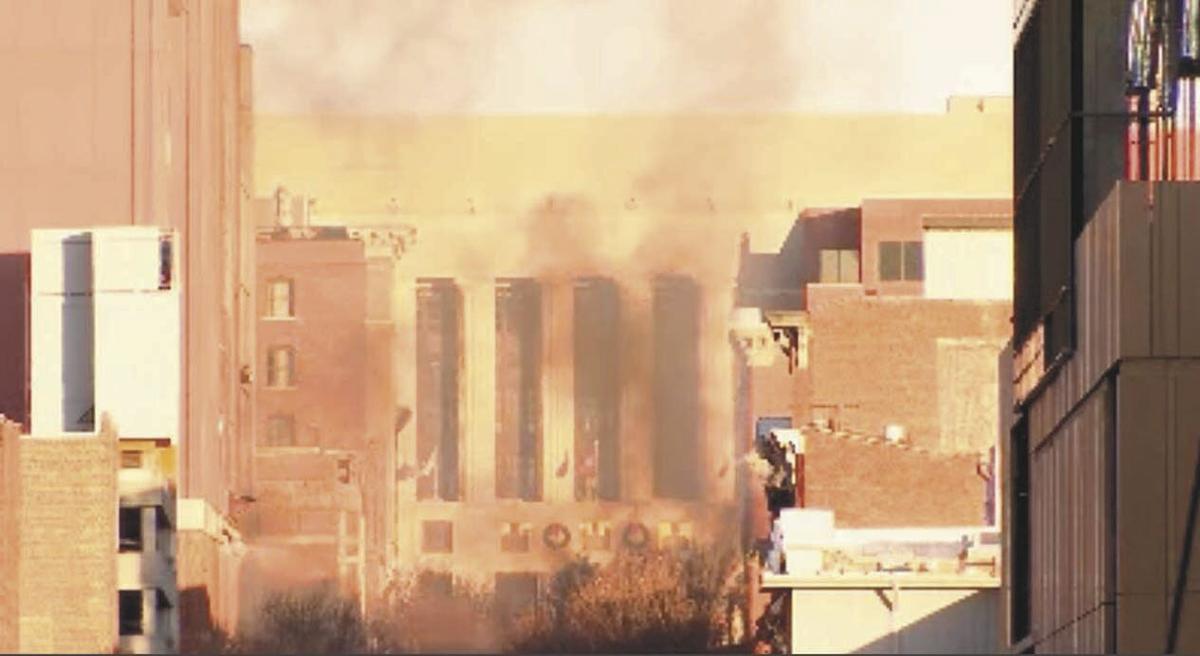 Smoke rises into the downtown Nashville skyline after an explosion that occurred in the early morning on Christmas.

This screenshot was captured from raw video of the Christmas Day explosion in downtown Nashville, Tenn. A local family had been preparing to visit friends in the area before news of the explosion caused them to change their plans.

Smoke rises into the downtown Nashville skyline after an explosion that occurred in the early morning on Christmas.

MURRAY — Many people in Murray may remember that current Kentucky 42nd Judicial Circuit Judge James T. Jameson was very much into music well before he pursued a career in law.

In fact, Jameson was part of a very successful bluegrass outfit from his native Marshall County — Josh Williams and the High Gear Band, which was fronted by Williams, who has gone on to become a well-known artist in that genre. For several years, he has been the guitarist for bluegrass powerhouse Rhonda Vincent and The Rage.

And during those years where music was his main calling, Jameson was a fixture in downtown Nashville, Tennessee, where he developed many friendships that he still has today. In fact, he and his family were set to make one of their frequent visits to Music City USA on Friday, when his world stopped.

That morning, Jameson, like the rest of the world, began learning about an explosion in downtown Nashville, specifically in the area of Second Avenue. It was an area that his family and close friends from the Nashville area were, more than likely, going to visit mere hours later.

“Always. Even if it’s for only a quick drive, we always go through downtown,” Jameson said Monday as he continued to try to process his feelings after learning that the explosion was caused by an RV being rigged with a bomb that caused enormous damage to buildings lining Second Avenue, which has numerous stores and businesses.

One of those is the Old Spaghetti Factory, a favorite dining spot for himself and wife Jenny. As of Monday, he did not know the status of that place.

“It was right there, though,” he said. “It seems as if we’ve been there thousands of times, and there’s always this old guy that sits on the corner where the Old Spaghetti Factory is and he’s got a couple of tunes he’ll play if you ask him. When you hear about something like this, you’re asking, ‘Was he killed?’ Now, I doubt it because of the time of day, but that’s the problem with these kinds of attacks. That’s what they’re designed to do, create uncertainty.

“It’s not the terror, the instant act itself, as much as it is the fear that follows and that takes years to go away.”

And that is why Jameson said he was overcome emotionally Friday morning at his home, a sight that caused daughter Julianne to do the same as she was hurt by the image of her father being in such pain. Jameson said his tears were about the uncertainty of a city he dearly loves, where the idea of something like this happening, until Friday, was an afterthought.

“It was almost like Murray had gotten hit. It was that personal,” he said. “When I had the music store, I was about 18, and I was going to meetings and conferences there, plus there were the music stores in downtown that I traded with. I took all of my (guitar) lessons in Nashville, and my idea was that, when I graduated high school, and one of my teachers (at Marshall County High School in Draffenville) had an inroad to Opryland, I was going to start playing there. The plan was to get on a gig with someone like Ricky Skaggs or Vince Gill or whoever. That was the way you did it back then.

“So I was wanting to be part of that scene down there. High Gear actually did play a few times in Nashville. We played at the Station Inn, which is just a few blocks over from Second Avenue and it was kind of the Mecca of bluegrass music back then.”

Williams lives in Nashville. In fact, Jameson said he lives very close to the bomb site.

“I texted him as soon as I heard and he texted back to say he was OK,” the judge said. “I know he’s close to (the bomb area) because about a year ago, we were down there and I texted him that I was in the area and if he could come see us. He was there in only a few minutes.”

Jameson said that, other than Williams, no one he knows in Nashville lives close to where the RV was parked Friday morning, along Second Avenue, between Commerce Street and Broadway. The family to be visited Friday resides outside the downtown area and with several children between them, Jameson said it probably would have been a time to share some stories about the city’s music history.

“And it’s so much fun when kids are involved,” he said, referring to the 3rd and Lindsley Bar and Grill, just outside the blast zone, where he said it is not uncommon to see, on a Monday night, and usually unannounced, the likes of country superstar Gill appear with only himself and an accompanying guitarist.

“Then, we can say, ‘Hey kids! It’s Chambers Music!’ This is where they used to keep a parking spot listed as ‘For Chet Atkins Only,’ and I always thought it was a joke, until, one time, I walked in there and, sure enough, there was Chet Atkins talking to the owner, Joe Chambers. I tell those kids those kinds of stories and it means a lot to me. It’s kind of one of those things about the road not taken for me as far as doing music professionally, but you go downtown and that’s where all that history of country music is … Broadway, Second Avenue, Church Street. It’s all there.

“Not to be naive, but I guess there was some solace before that, if someone was going to do something like this, they were going to go to the place where they could do the most harm, New York, Los Angeles, some place like that. And Nashville is a big city but it’s in the middle of the country, instead of on the edges. I can’t imagine terrorists are sitting around saying, ‘Hey! Let’s strike the country music capital in the center of America,’ right?

“You just realize that it’s not just New York and L.A. that are targets for this, and it happens to be a place that’s not far away and that you visit on a very frequent basis.”

The Federal Bureau of Investigation officially identified a Nashville-area man, Anthony Quinn Warner, as the person who owned the RV.  He is believed to have been inside the vehicle when it exploded.

“You don’t know. Now, you have to worry about this stuff, and maybe I should’ve been worried about this stuff before but never did. You’re now asking yourself, ‘Is it safe?’” Jameson said. “You’ll always have to be on the lookout and I really don’t know how it’s going to feel next time we go there.

Eventually, though, he said, there will be a next time.

“My kids love going there because they know it’s going to be a good time and they’re going to hear some good music,” he said. “And getting to share that with my kids is a wonderful thing. It’s a happy time … or was.

“We’re still going to make it a happy time, but it’s going to be different.”