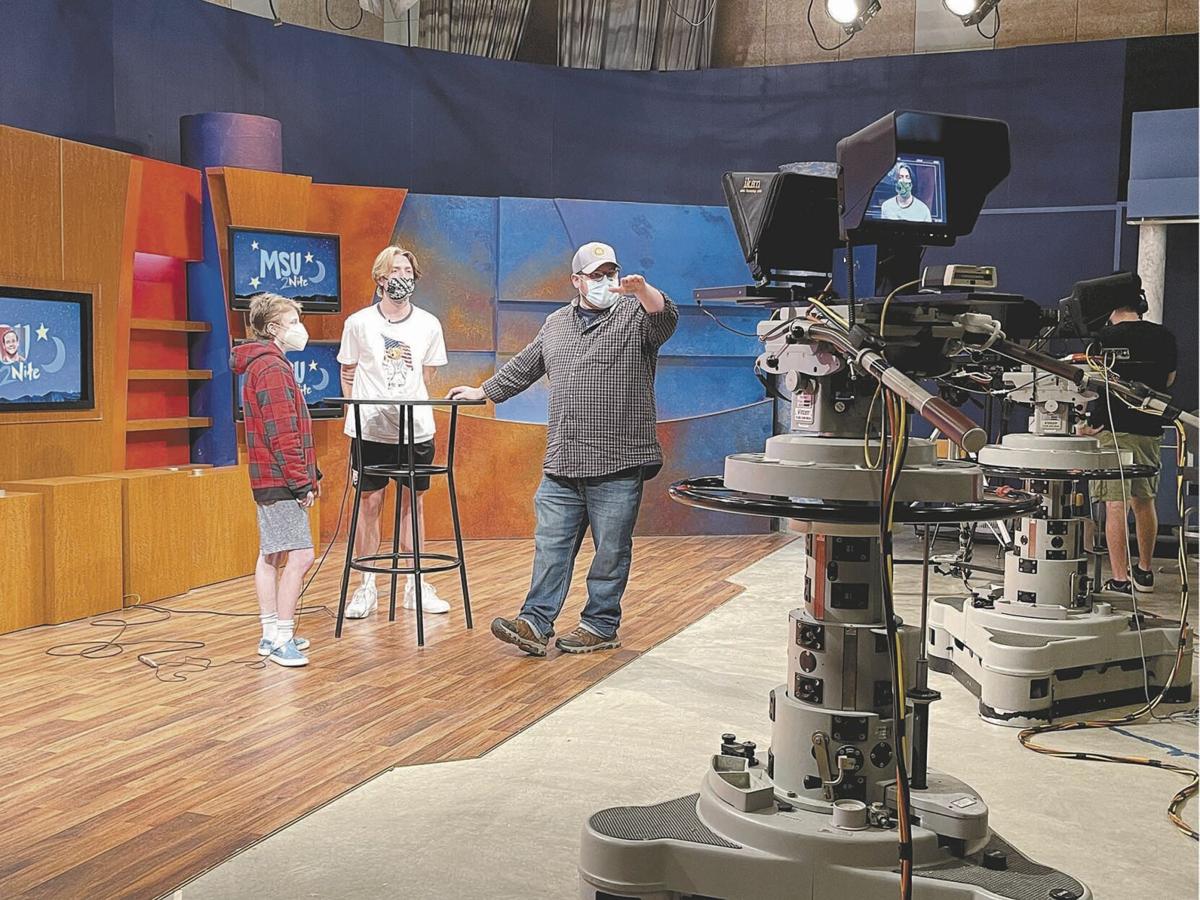 Chris Haynes, right, the JMC instructor in charge of the studio production class at Murray State University, works with students Issac Ash, left, and Samuel Stewart as they rehearse for a live broadcast of "MSU 2Nite." The show has helped many students learn the basics of broadcasting since it was created by Jeremy McKeel in 2003. 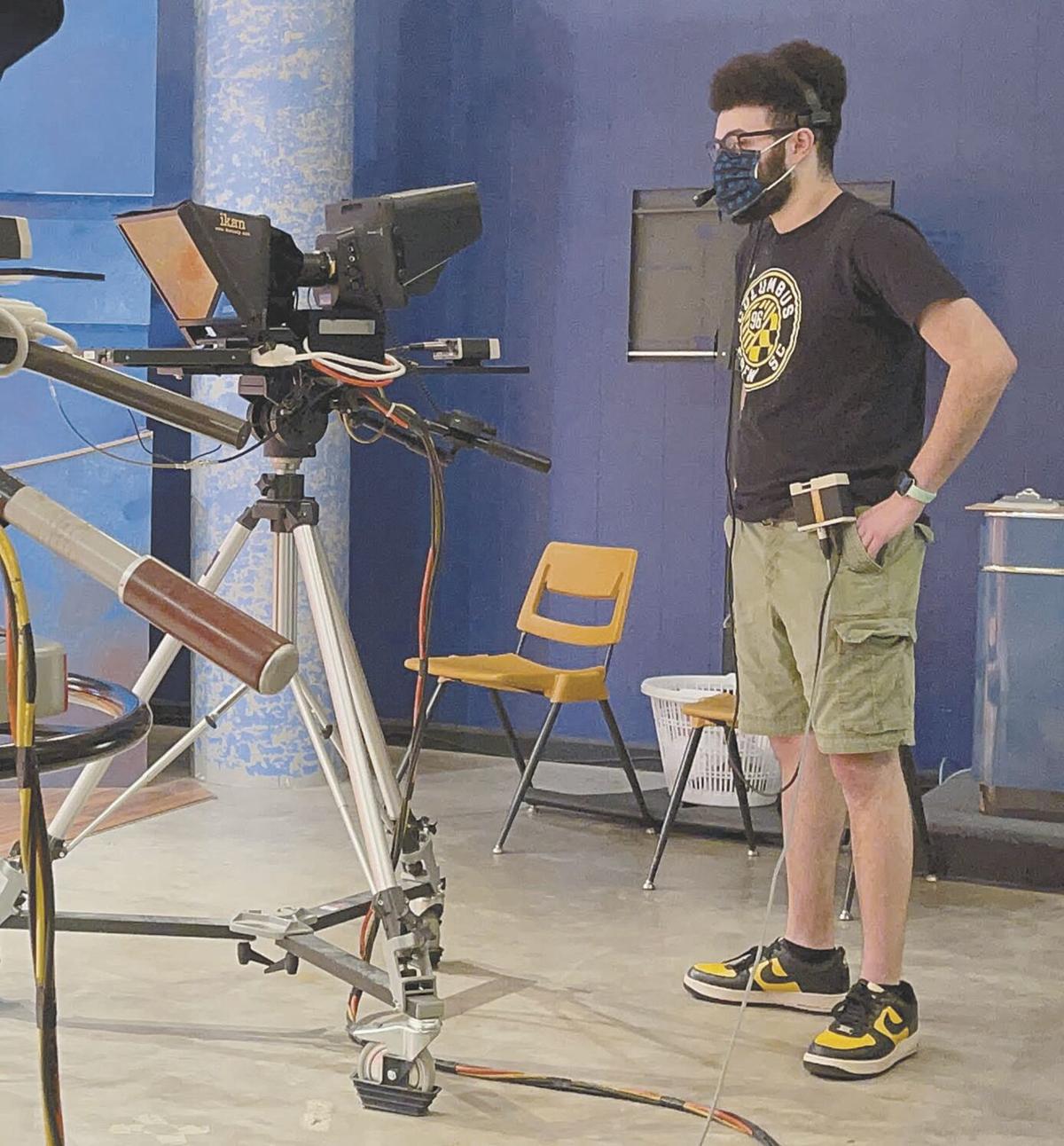 Nick Kendall is seen behind the camera during a rehearsal for "MSU 2Nite," which broadcasts live at 5 p.m. each Tuesday. The six students working on the show take turns and rotate who is producing and who is starring in the show each week.

Chris Haynes, right, the JMC instructor in charge of the studio production class at Murray State University, works with students Issac Ash, left, and Samuel Stewart as they rehearse for a live broadcast of "MSU 2Nite." The show has helped many students learn the basics of broadcasting since it was created by Jeremy McKeel in 2003.

Nick Kendall is seen behind the camera during a rehearsal for "MSU 2Nite," which broadcasts live at 5 p.m. each Tuesday. The six students working on the show take turns and rotate who is producing and who is starring in the show each week.

MURRAY – Eighteen years after its creation, the student-run TV show “MSU 2Nite” is still going strong, teaching a new crop of students each semester how to produce live television.

During the times it is in production, the show broadcasts live at 5 p.m. on Tuesdays from the MSU TV-11 studio on the eighth floor of the Price Doyle Fine Arts Building. Jeremy McKeel, manager of MSU Digital Media Services, said he created the show in 2003 after having recently joined the journalism and mass communications faculty. It is part of the studio production class, JMC 358.

“Kind of the genesis of it was that (former JMC chair) Dr. Bob Lochte and I were talking about the class and were rethinking it with the focus of being more of a studio class, because it hadn’t been that (to that point),” McKeel said. “So as we were thinking about that, it was kind of the natural thought process, at that time, that nighttime TV – something akin to ‘The Tonight Show’ – was a pretty popular genre, and it had the ability to be (different from) something like news, which is the obvious other studio element. That was already being done, and of course, before that in years past, TV-11 had a real strong news production. But we thought this was kind of something that the kids might gravitate toward a little bit more for those that weren’t hard-core journalists.

In its current incarnation, the program is kind of a cross between a comedy, newsmagazine and talk show. There are pre-taped comedy sketches – including “cold opens” before the opening credits – segments talking with students about different trends and hobbies, live banter in which the hosts make quips about current events on campus and in the country at large, movie reviews and other segments in which the hosts and guests discuss different aspects of pop culture, sports and other topics.

“So with that type of ‘infotainment’ show, you could kind of do a little bit of everything,” McKeel said. “We’ve done things that were never really hard news, but instead community news and community spotlight type stuff. Then it opens it up for the students to do anything creative that they want to do. So similar to a nighttime talk show, it could be goofy fun or it could be something that’s more informational.”

“When I inherited this class in 2012, I continued doing ‘MSU 2Nite’ like they were doing before because I thought it’s a good way (to learn) because the goals and learning objectives for the class are all studio-based,” Haynes said. “There is an element where students are responsible for producing content on a weekly basis, so they are learning all the positions in the studio and getting experience in the control room and all that stuff over the whole semester. That’s the whole point of it, so it makes the most sense to actually produce media, rather than have exercises that don’t end up really being anything. This gives them a chance to kind of have a laboratory environment where they make media and fail at some times and succeed at others.”

This semester’s hosts, writers and producers include Dustin Wilcox, Cade Utterback, Joe Harris, Nick Kendall, Samuel Stewart and Issac Ash. They all take turns producing and starring in the show, and this week’s episode was the eighth of the season. There will be a total of 11 this season, reduced from the 12 that were planned because of February’s snow storm.

“We have a lot of fun with it,” Wilcox said. “We really try our best to subvert expectations and put on the most exciting show possible.”

“(This class has) a lot of great minds, and we just have a good time creating our content every week,” Kendall said.

“It’s given us a great experience so far, being able to be in front of the camera and operate and actually run the clicker and stuff on audio,” Harris said. “I never did that before in my life, so getting a true hands-on experience with a great professor, Chris Haynes (is valuable); he’s really helped us out a lot. I know some of us are going to try and get jobs in TV or radio or editing, so this is a great jump-start for us.”

“It’s been a good way to get hands-on experience,” Ash said. “As for my future, I want to mainly do film editing.”

Stewart said each of the cast members put their different influences and inspirations from pop culture into the show. For example, the cold open sketch he wrote for this week’s show was inspired by the TLC reality series “My Strange Addiction” and involved Wilcox being addicted to eating copious amounts of mayonnaise. Many of the sketches over the run of the season tie together through either the characters or plot, Stewart said.

“I think we all take inspiration from different shows we watch, just a lot of different ideas going around,” Stewart said. “There’s a lot of continuation of different stories. We were talking yesterday about how the Marvel Cinematic Universe is all connected and we were joking around saying that with all the different episodes we had, we could tie them all together in the last episode somehow.”

Utterback said the shows don’t usually stick to a set theme, but they have incorporated holidays into them as they come up, which have so far included Valentine’s Day, St. Patrick’s  Day, April Fool’s Day and Easter. Another also heavily involved music, including an appearance from a student playing saxophone.

“We took the existing show format and we turned it on its head,” Utterback said. “We just tried to make it a little silly, a little funny, a little wacky. We put our own spin on things and we wanted to basically revamp the show to say, ‘This isn’t your granddaddy’s ‘MSU 2Nite.’ Which isn’t to say that the people before us didn’t do a great job, because I really like what they did with the show. We just wanted to take it and throw it in a different direction.”

Wilcox and Utterback said they have also added a lot more filmed pieces to the show this semester than there were on in the past. Wilcox said he has heard positive comments from their peers who watch the show.

“I don’t know about everybody else, but I’ve heard some good feedback from people I know,” Wilcox said. “People really like the wacky ideas we have, and that probably is due in no small part to us paying homage to all the TV things we love. The only requirement of the class is that it has to be a live production, but we went and made bumpers and promos and fake commercials too.”

The show airs live at 5 p.m. Tuesdays, but people can also watch them in full any time at youtube.com/msu2nite.