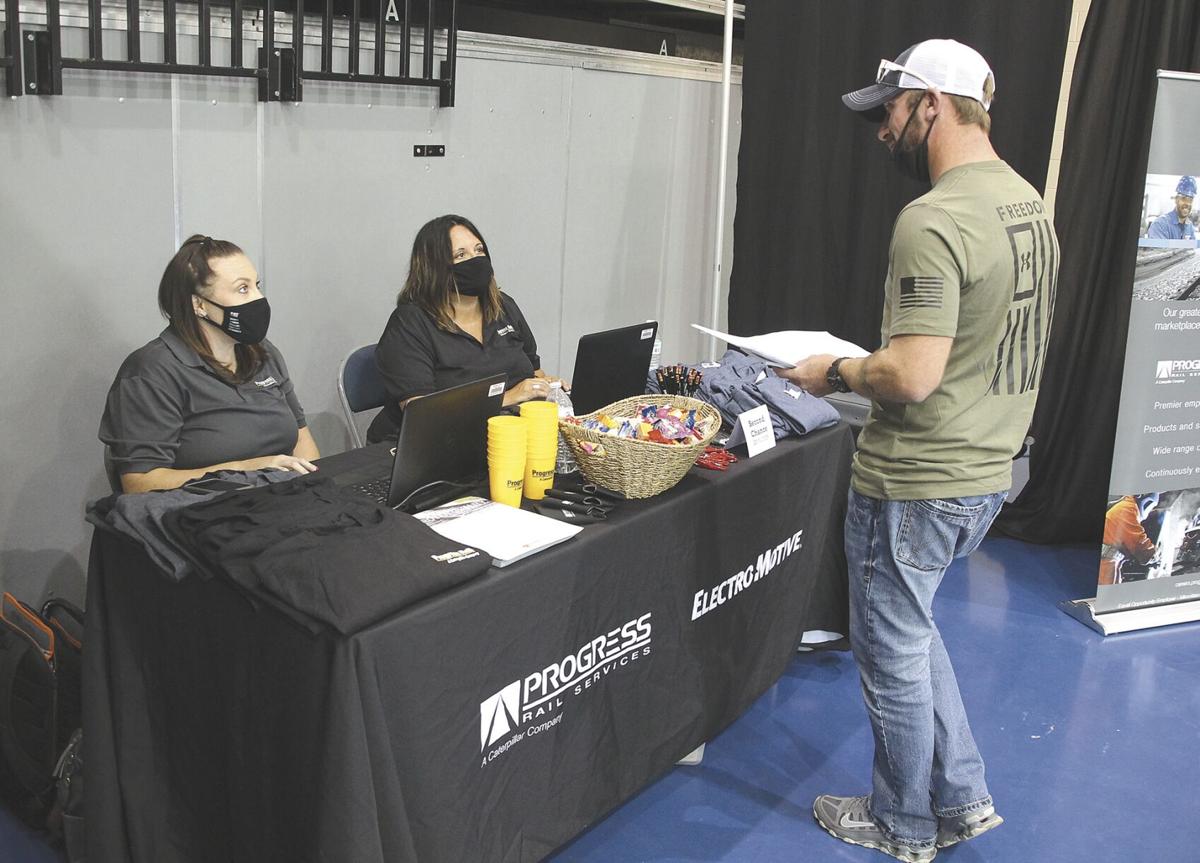 Human resource coordinators Brittany Enochs, left, and Lindy Johnson with Progress Rail Services in Mayfield talk with Cody Morrow of Mayfield Wednesday during the job fair held by the West Kentucky Workforce Board at Murray State University’s CFSB Center. A total of 48 companies and employers from around the region set tables and gave out information at the event. 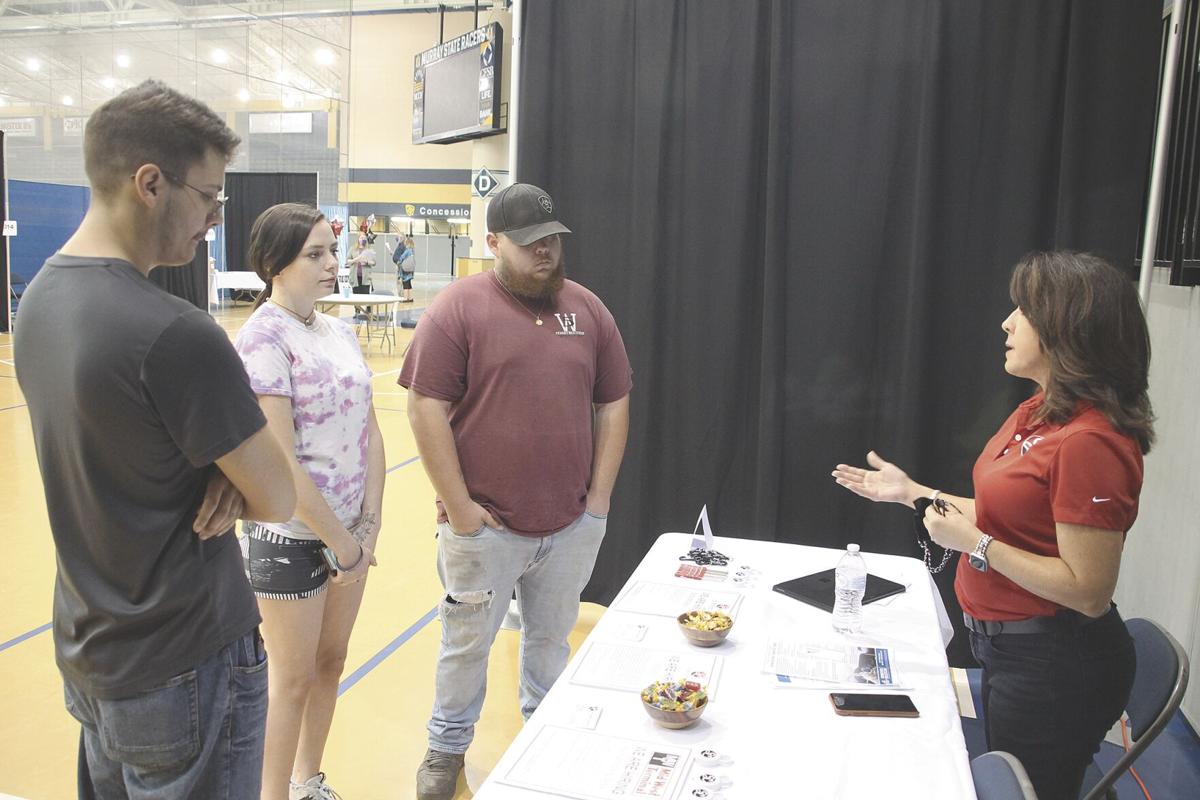 Khelben Morris, left, Lexi Johnson and Ricky Lofton, all of Murray, speak with Jim Smith Contracting Human Resources Manager Lori Hall at the job fair. The company is based in Grand Rivers and oversees projects all over the state.

Human resource coordinators Brittany Enochs, left, and Lindy Johnson with Progress Rail Services in Mayfield talk with Cody Morrow of Mayfield Wednesday during the job fair held by the West Kentucky Workforce Board at Murray State University’s CFSB Center. A total of 48 companies and employers from around the region set tables and gave out information at the event.

Khelben Morris, left, Lexi Johnson and Ricky Lofton, all of Murray, speak with Jim Smith Contracting Human Resources Manager Lori Hall at the job fair. The company is based in Grand Rivers and oversees projects all over the state.

MURRAY – While the 48 companies that participated in Wednesday’s job fair on Murray State University’s campus might have represented a diverse array of industries, the overall messaging was consistent across the board: if you want to work, they want to hire you.

The fair was hosted at the CFSB Center by the West Kentucky Workforce Board, and the participating employers were looking for workers of all types, full-time or part-time. Some of them also proudly publicized that they are Second Chance Employers, meaning they are willing to hire individuals with criminal records, so there were seemingly opportunities for just about everyone.

“We have been offering regional job fairs all summer in our communities of Madisonville, Hopkinsville, Paducah and here in Murray,” said Mary Anne Medlock, the Purchase Region business services liaison for WKWB. “This is the last one we’ll have for the year, probably. We have a lot of employers who are eager to hire people for full-time positions and part-time positions, so we wanted to come here to be able to help the employers in this area. We’ve been able to make contact with a lot of employers across the region. About half the employers that are attending are actually from outside of Murray because they’re here to recruit that Murray talent. They understand the role in how important our workforce is to the region, so they’re here to specifically recruit Murray people.”

One of the Murray companies there was Rudolph Tire, whose president, Mallory Howard, said she was trying to fill several types of positions.

Chris Gillum, the regulatory compliance leader with Kenlake Foods, said he and the other company representatives on hand were pleased with the quality of the workers they had met Wednesday.

“We’ve had a good day,” he said. “Overall, we’ve had some good candidates come through. We probably didn’t have the number of people we would have liked to have seen, but the quality of the people has been really good. Really, what we’re looking for is people that have the same core values as we have in the plant – safety, quality, honesty, respect for others, integrity. That’s really what we look for in our employees because that’s what we practice at the plant.”

One of the local school districts was also trying to find people for a variety of positions.

“We have various areas we have employment opportunities in; anywhere from full-time during school hours to the transportation area, where you kind of have a split day,” said Cathy Morris, director of personnel and human resources for Calloway County Schools. “So if you only want to work four to five hours, we definitely have transportation and food service needs. We also have needs for substitutes in all those positions as well, so if you’re not wanting to sign up for a commitment through the whole school year, the substitute positions are nice to get a little work in when you want to. And it will certainly help us. These job fairs are nice because you can talk face to face and really find out the positions that match the individual. Sometimes it’s hard to do that by reading a job description on a website.”

A’neial Bell, public information officer with the Kentucky State Penitentiary in Eddyville, was there to recruit for the Kentucky Department of Corrections.

That career mindset did seem to be prevalent with people who were going from table to table.

“I just came here on the recommendation of a friend of mine,” said Khelben Morris of Murray. “I had decided that it was a great opportunity to look for a higher-paying job, so I came here to look and explore opportunities for different career paths.”

“We just came here today to look for some really good candidates for the job openings we have,” said Lori Hall, HR manager for Jim Smith Contracting in Grand Rivers. “It seems like the labor market is narrow right now. It’s hard to find good people, and we’re just looking for people who are willing to learn and want to work hard and be dependable.”

Pam Gray and Jeff Lindsey with the Kentucky Health Benefit Exchange, also known as kynect, were not only there looking for applicants, but to promote the KHBE’s services as well.

“I believe this is the kind of event we need in the area to get the job hunters in with the people that want to get jobs filled,” Lindsey said. “And it gives them more awareness of programs they can utilize in the community.”