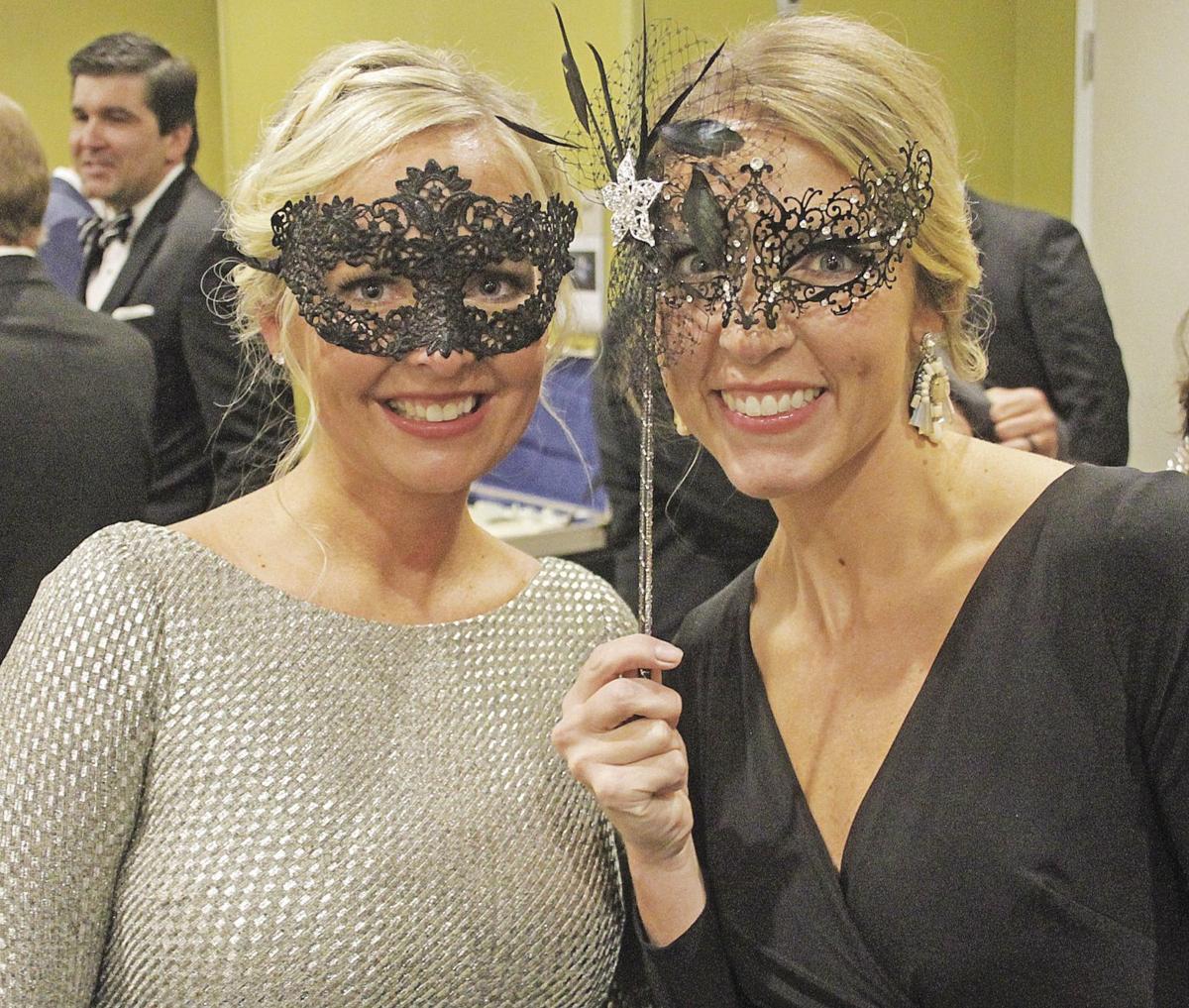 Ashley Duncan, left, and Erin Garland are pictured as they donned their masks Friday night for the inaugural Behind the Mask Gala for Special Olympics at the Springhill Suites by Marriott hotel in Murray. The two women served as co-chairs of a committee for the event, each sharing the duty of raising Duncan’s daughter, Madi Garland. Erin is Madi’s stepmother. 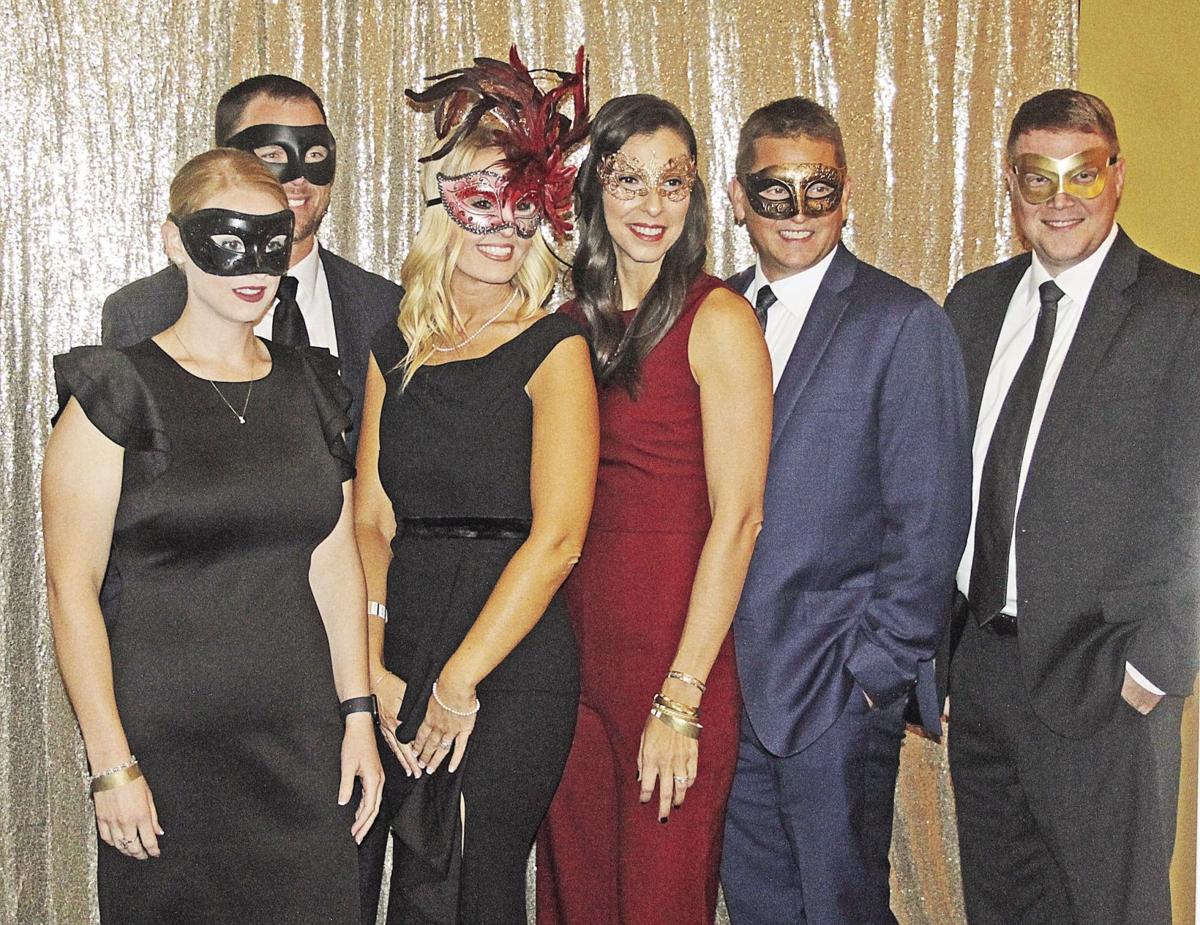 This group had their masks on full display as they posed for a photograph during Friday night’s inaugural Behind the Mask Gala. 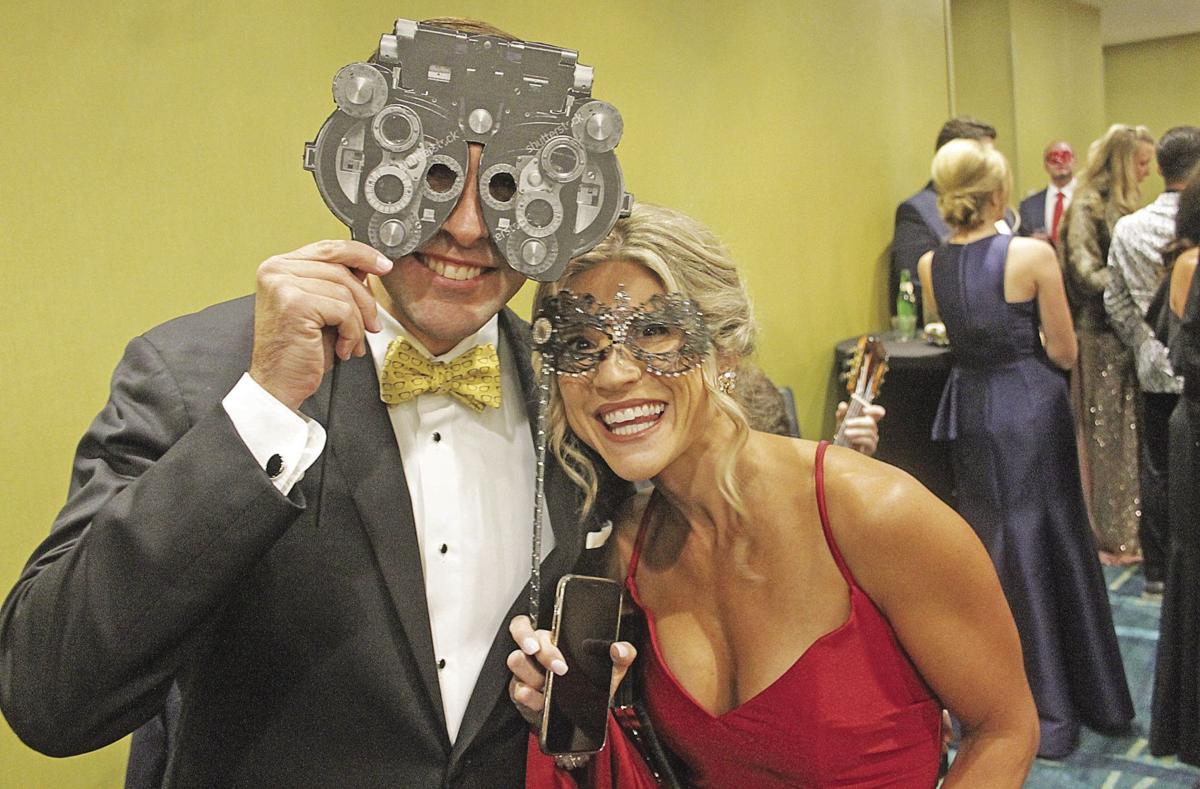 Dr. Reed Jarvis, left, had a specially-designed mask for Friday's event as he embraced his profession as an eye doctor in this image with his wife, Lora.

Ashley Duncan, left, and Erin Garland are pictured as they donned their masks Friday night for the inaugural Behind the Mask Gala for Special Olympics at the Springhill Suites by Marriott hotel in Murray. The two women served as co-chairs of a committee for the event, each sharing the duty of raising Duncan’s daughter, Madi Garland. Erin is Madi’s stepmother.

This group had their masks on full display as they posed for a photograph during Friday night’s inaugural Behind the Mask Gala.

Dr. Reed Jarvis, left, had a specially-designed mask for Friday's event as he embraced his profession as an eye doctor in this image with his wife, Lora.

MURRAY — Totals were not available at press time Friday night, but early indications are that the inaugural Behind the Mask Gala for Special Olympics was headed toward being a big success.

Just minutes into the event, its silent auction that included a number of big-ticket items had already generated a few thousand dollars in bids. Organizers said this was a very positive sign that a big night was just beginning for the activity, designed to resemble a masquerade ball with most guests using masks to disguise themselves.

Two of those organizers had more interest in the event’s success than most at the Springhill Suites by Marriott hotel in Murray. They were Ashley Duncan and Erin Garland, the co-chairs of the event’s committee. They are also the mother and stepmother, respectively, of Madi Garland, who participates with the Murray-Calloway County Rockets Special Olympics program that enables children and adults with intellectual disabilities to compete in athletic competitions.

As they donned their masks Friday night, Ashley and Erin did so with only one thing in mind, the same thing that has mattered most to both of them for 14 years now — doing all they can for Madi, and doing it together.

“Madi comes first in both of our lives,” Ashley said of how she and Erin not only share the duty of raising Madi, but do so as friends. “It is (unusual for a mother and stepmother to be so close), but you have to make it work, and it works for us.

“But you have to, especially with a child with a disability (Down’s syndrome) in a blended family.”

So, after Madi’s uncle, Murray auctioneer Trey Morris, was moved by a Ledger & Times story last year about how the Rockets program was struggling to finance a springtime prom for its athletes and began expressing a desire to do something, Erin and Ashley quickly joined the cause. And as Morris said last week in a preview for Friday night’s event, they worked side by side to help make it happen.

“This gives her a place she has in common with other people, and, as a parent, there is nothing better than for your child to be happy. (Rockets Coordinator Laura Miller) is amazing and what they’ve built is amazing. We’re thankful to have the chance to give back to that as parents.”

“Her big thing is cheer. Cheer’s her passion,” Ashley said of how Madi is part of the Rockets cheerleading team that competes in region and state competitions each year. “That’s what she loves and, without Special Olympics, she would never get that opportunity.

“When cheer season is coming up, that’s all we talk about at our house. She’s like, ‘Is today cheer? Is tomorrow cheer?’ And then we go to a big competition and she just turns into a superstar. There’s no words (for how incredible it is).”

The Rockets program has had meteoric growth in the past few years, going from only a handful of athletes to its current group of about 160. Not all of them are from Murray, either, with some hailing from Henry County, Tennessee.

A big problem, though, is that with that much growth, the cost for funding that many athletes has become quite an obstacle. Miller said several weeks ago that just for this year’s bowling program, which included 140 of the Rockets, it was going to cost $18,000 to fund the season. She said her program struggled to find that much money.

Even more daunting was the fact that this was depleting the funds available for the other sports the Rockets play. Morris said last week that heading into Friday, a goal of his was to raise enough money to make those worries a memory.

Friday night’s event was a sellout, and with the amount of inquiries he said he has heard the past few weeks from people not able to secure a ticket this year, he said he is certain that a larger venue will be needed for next year.

In other words, it appears this cause matters to the community, which is why he said he was feeling a bit nervous about serving as the evening’s emcee. That was true despite the fact he happens to be the 2019 National Association of Auctioneers international champion in a profession that requires performing in front of A-list celebrities quite often.

“I still get pretty antsy when I do this, but this one’s a little different. This one makes me jittery a little bit on the inside,” Morris said. “It’s something different about the community you live in and people you share your life with on a daily basis, and now you’re bringing them all under one roof like this.

“I don’t care how many times I’ve done this away from home (he will lead a big-ticket event in California tonight for future Baseball Hall of Famer Albert Pujols); when you do this in front of people you’ve grown to love, as well as the people we’re doing this for? Wow!”

Special Olympics has become not only an important thing for its athletes and families, but its message has spread throughout the community. Murray High School was the first campus to accept the Kentucky High School Athletic Association’s invitation to field a unified track and field team in 2015. Just last year, it was crosstown campus Calloway County High School’s turn to be recognized on a national scale when it was named a National Unified Champions School for promoting inclusion.

Also, last year, it was a Calloway athlete, Joseph Ramirez, who won not one, but two gold medals in sprint events at the Special Olympics USA Games in Seattle.

“A night like this is absolutely phenomenal for this program,” said longtime Rockets coach Chuck Williams. “This is our first event and I look forward to see what the years to come will bring.”