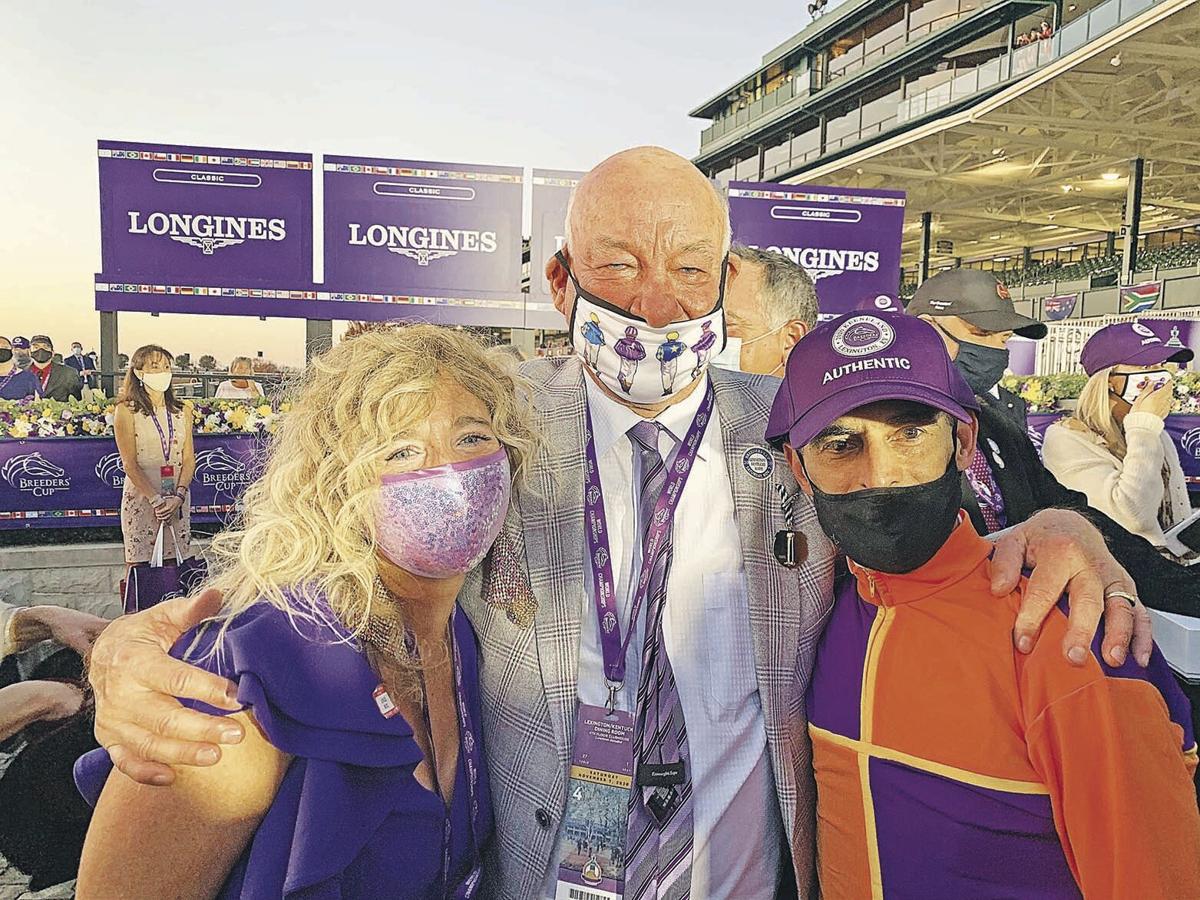 Murray State alum Jack Wolf, middle, poses with jockey John Velazquez, right, and Velazquez's wife, Leona, Saturday afternoon after John rode Authentic to a win in the prestigious Breeder's Cup Classic at Keeneland in Lexington. The win came in America's richest horse race and now puts Authentic, of whom Wolf is part owner, in position to be named Horse of the Year for 2020.

Authentic, trained by Bob Baffert, wins the Kentucky Derby with jockey John Velazquez aboard in September at Churchill Downs in Louisville. Authentic added the Breeder's Cup Classic to his accomplishments Saturday as he outrun a strong field at Keeneland in Lexington.

Murray State alum Jack Wolf, middle, poses with jockey John Velazquez, right, and Velazquez's wife, Leona, Saturday afternoon after John rode Authentic to a win in the prestigious Breeder's Cup Classic at Keeneland in Lexington. The win came in America's richest horse race and now puts Authentic, of whom Wolf is part owner, in position to be named Horse of the Year for 2020.

Authentic, trained by Bob Baffert, wins the Kentucky Derby with jockey John Velazquez aboard in September at Churchill Downs in Louisville. Authentic added the Breeder's Cup Classic to his accomplishments Saturday as he outrun a strong field at Keeneland in Lexington.

LEXINGTON – Anyone who gets into horse racing dreams of the kinds of things Murray State alum Jack Wolf has experienced the past three years.

Co-owner of Louisville-based Starlight Racing with his wife, Laurie, he has utilized a growing custom in the field that has helped him be part of some of the sport’s biggest moments. In 2018, he bought interest in a colt named Justify and then watched as the 3-year-old proceeded to win all three jewels of horse racing’s Triple Crown.

However, he has said that as enjoyable as that was, what happened this year topped it. A horse that Starlight was the primary owner until early this year, Authentic, stunned everyone with an upset win in Wolf’s favorite race, the Kentucky Derby at Churchill Downs in his hometown of Louisville. However, Wolf had not let this horse go entirely; he still had part-ownership, meaning he also had vested interest when Authentic went to the starting gate Saturday for the biggest single race in American racing, the Breeder’s Cup Classic in nearby Lexington.

And when all was said and done, Wolf and his fellow partners were immersing themselves in the glory of victory again. This time, Authentic, once again seen as an underdog, proved he was the best horse against the best competition in the business, cruising to the win by more than two lengths.

“That’s a little crazy, isn’t it? But we like to try and do that kind of stuff,” Wolf said Sunday from Louisville, remembering his thoughts as he watched Authentic, a sole Starlight Racing product until April of this year, tear toward the finish line ahead of 4-year-old star Improbable. “I love going to Keeneland. It’s one of my favorite places, especially when it’s like it was (Saturday) with the sun setting over the backstretch like that. It was perfect.

“It’s been a remarkable three years,”

Once again, it was Hall of Fame trainer Bob Baffert with whom Wolf teamed to make this year’s run happen. Wolf praised Baffert for his decision to take Authentic off of the track in July after barely winning the Haskell Invitational in New Jersey, where questions about his endurance began circulating. Baffert sat Authentic for seven weeks before the Derby, allowing a horse named Tiz the Law to become seemingly everyone’s pick to win the Triple Crown after an impressive showing in June at the Belmont Stakes, a Triple Crown race.

However, it was Authentic proving more than able to handle a long distance in Louisville, outdueling Tiz the Law in the home stretch of the 1 ¼-mile race. Authentic just missed adding the Preakness Stakes in Baltimore as another Triple Crown win but fell short in another dramatic stretch run to filly Swiss Skydriver.

Then came Saturday as Tiz the Law was back as an opponent and was installed as the favorite. However, Wolf said he had faith in Baffert and the other key to Authentic’s success, veteran jockey John Velazquez, who Wolf said rode a near-perfect race Saturday.

“It was how he rode the race,” Wolf said of how it was a simple matter of Velazquez following Baffert’s instructions to the letter. We wanted to get him to the lead and that is what we’ve found is this horse’s favorite running style. Once he was able to do that, he was able to run away from the field.”

Authentic took the lead just before the first time the field went under the finish wire and never looked back. He opened the lead to as many as four lengths before cruising into the finish an easy 2 ½ lengths in the lead.

Interestingly, Wolf had previous interest in Improbable as well. This was the horse in which he had part-ownership for the 2019  Triple Crown, one year after stable mate Justify became horse racing’s 13th Triple Crown champion, However, Improbable, trained by Baffert,  did not match Justify’s performance, which included a Preakness in which the horse actually attempted to jump out of the starting gate before finishing well out of the running.

“After that, I threw in the towel,” Wolf said. “But I always thought he was a good horse, and he has turned out to be very good. He won three Grade 1 stakes races this year as a 4-year-old and we knew he was going to be good (Saturday).

“I don’t have interest in him anymore, but I still put a bet on him.”

Tiz the Law was not a threat, falling back to sixth, which effectively seems to have ended the argument as to who was the best 3-year-old horse this year. The Eclipse Awards are in January and Wolf believes Authentic will give him his second Horse of the Year honor.

“To have a Derby winner and a Classic winner, and to have beaten Tiz the Law twice, yeah, he’s the best horse,” Wolf said.