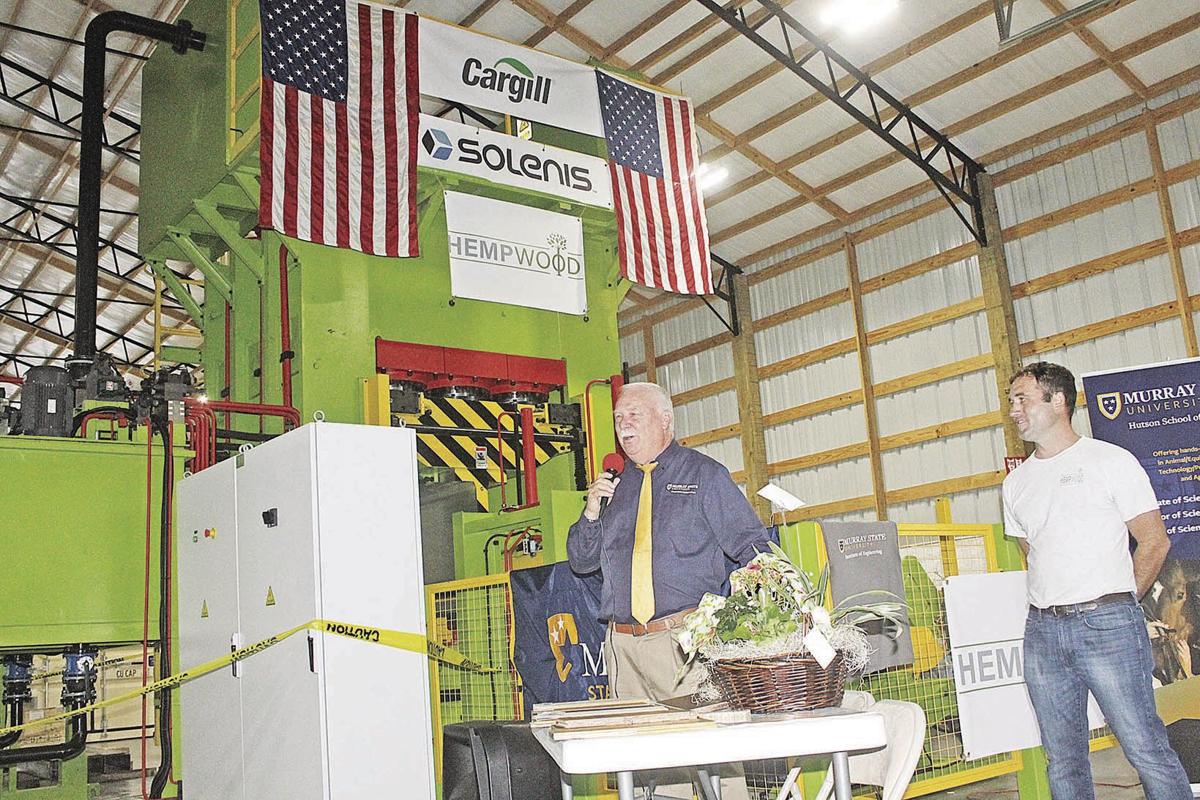 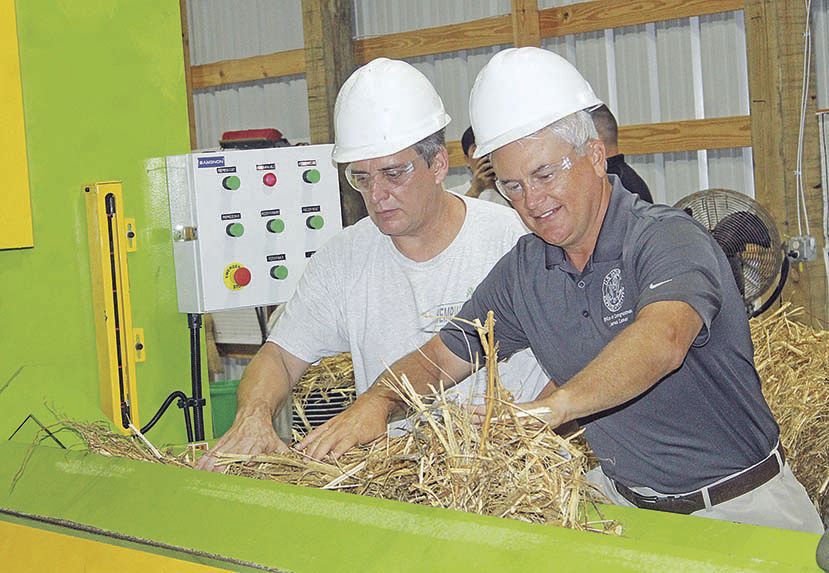 ELM GROVE — As he stared at a hefty piece of lumber Monday morning near the close of the ribbon-cutting for the new Fibonacci plant in Calloway County, Tony Brannon seemed to have the perfect summation.

“This is whole new take on farm to table,” he said, his comment drawing lots of laughs, but also plenty of smiles.

He was not talking about the idea of food resulting from harvest. He was talking about a revolutionary means of turning the crop of the moment in Kentucky, industrial hemp, into flooring or cabinets – or tables. That block of lumber was made of hemp, a concept called HempWood, and it was the reason about 125 local, state and federal officials, along with community and business leaders, came to the plant facility in Elm Grove Monday.

“Murray is the epicenter for agriculture hemp in the United States. So we’re taking fiber from the stalk of the plant, then we are converting that by using a bio-based adhesive,” said Greg Wilson, founder and owner of Fibonacci, which is based in Maryland but is establishing its first-ever manufacturing facility in Calloway County.

To get to this point, Wilson has aligned with several interests, including Murray State University, which has gone all in on this project on a few fronts. Along with the Hutson School, the university has provided assistance through advertising students, its chemistry program, engineering institute and others. It was ready to provide the site for Wilson’s first plant, but that proved too big a barrier to jump.

It has been about the only barrier not successfully negotiated so far.

“So along comes this guy, Greg Wilson, who is making flooring from bamboo in China and now has this idea to make it out of hemp, and there are two words I can use to describe him, two words that really don’t go together: impatience and persistence,” Brannon said. “Well, when you take impatience and persistence, you will overcome barriers, and Greg has overcome the barriers to make this day possible. It would’ve been easy to quit.”

The support force would not let that happen, and another key player to Monday being possible was Kentucky 1st District Congressman James Comer, who was looking at hemp as a potential game changer on not just the agriculture front, but economic development and industrial fronts as well many years earlier as Kentucky’s ag commissioner. However, he said that all along, he did not have the seeds and the oil they produce for things like CBD products.

“You can make hardwood flooring from trees, and I’m all about that because we have a lot of timber that is harvested on my farm (in Monroe County) that is made into flooring. But it’s more sustainable to make it from something like hemp than it is from trees, and to the next generation of consumers, that is very, very important that we have sustainability and we have companies that are green.”

This is coming several days after Murray and Calloway County took a big blow economically with the announcement that the Briggs & Stratton plant that has been in downtown Murray since the mid-1980s will close next year. Wilson said he is taking job applications at work@hempwood.com and he is looking to hire two people each month through the rest of this year. Currently, the plant employs eight workers.

“It only adds about three miles to the commute. We’re only about three miles east of Briggs and Stratton,” Wilson said, appearing to invite Briggs workers to apply. “People can absolutely apply for this and manufacturing experience is definitely a plus. We’re planning on building eight of our press machines and have two of those here.”

Wilson said the ceiling for the plant will be two presses running two shifts each. He said 12 people would be needed to run each press, along with three management personnel, for a peak total of 50 employees.

“This plant is going to consume $1 million a year in raw materials (which will come from area farmers, particularly in Calloway, Hickman and Christian counties) and we’re also going to have an impact on labor, generating another $1 million a year,” he said.

One of the people smiling widest Monday was Calloway County Magistrate District 1 Eddie Clyde Hale. The plant is set in his district and he said the hemp concept holds unlimited potential.

“It’s awesome and to see it and how it operates is something I’ve been looking forward to for a while now,” Hale said. “Then you think about all of the jobs being created for this area. It’s a great thing.

“I remember attending a conference in Louisville a few years back and Congressman Comer, then he was agriculture commissioner, began to talk about it. At that time, it was just a baby and it has taken leaps and bounds since then, and it’s a great thing because it’s going to be used in so many things.”

Charles Harris of Murray has been working with Fibonacci on a contract for about the last month after people were needed to help construct the press that will be used for turning the hemp straw into wood. He said it has been an exciting thing to be part of something so innovative.

“It’s never been anywhere in the world. That’s all you need to know,” Harris said. “I think it’s great that it’s here. It’s great that Murray State drew this company in here. Now, maybe, this can turn into a huge industry.”