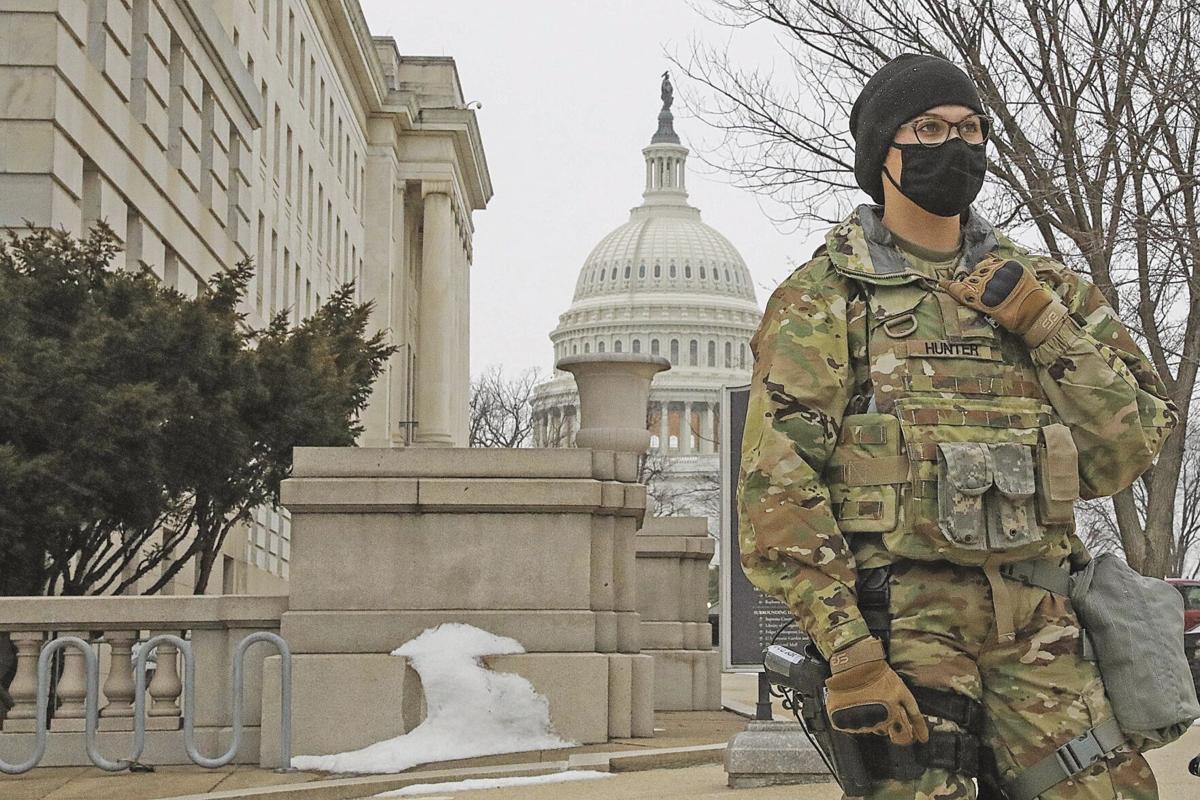 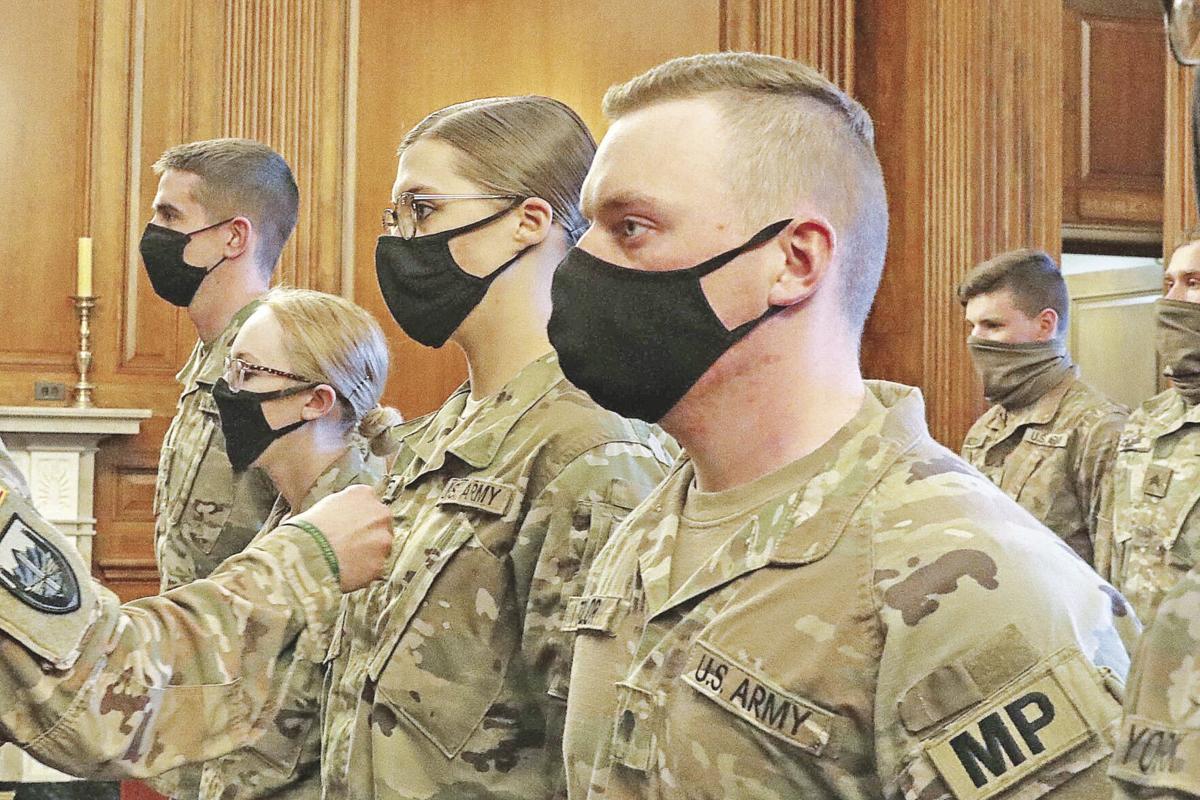 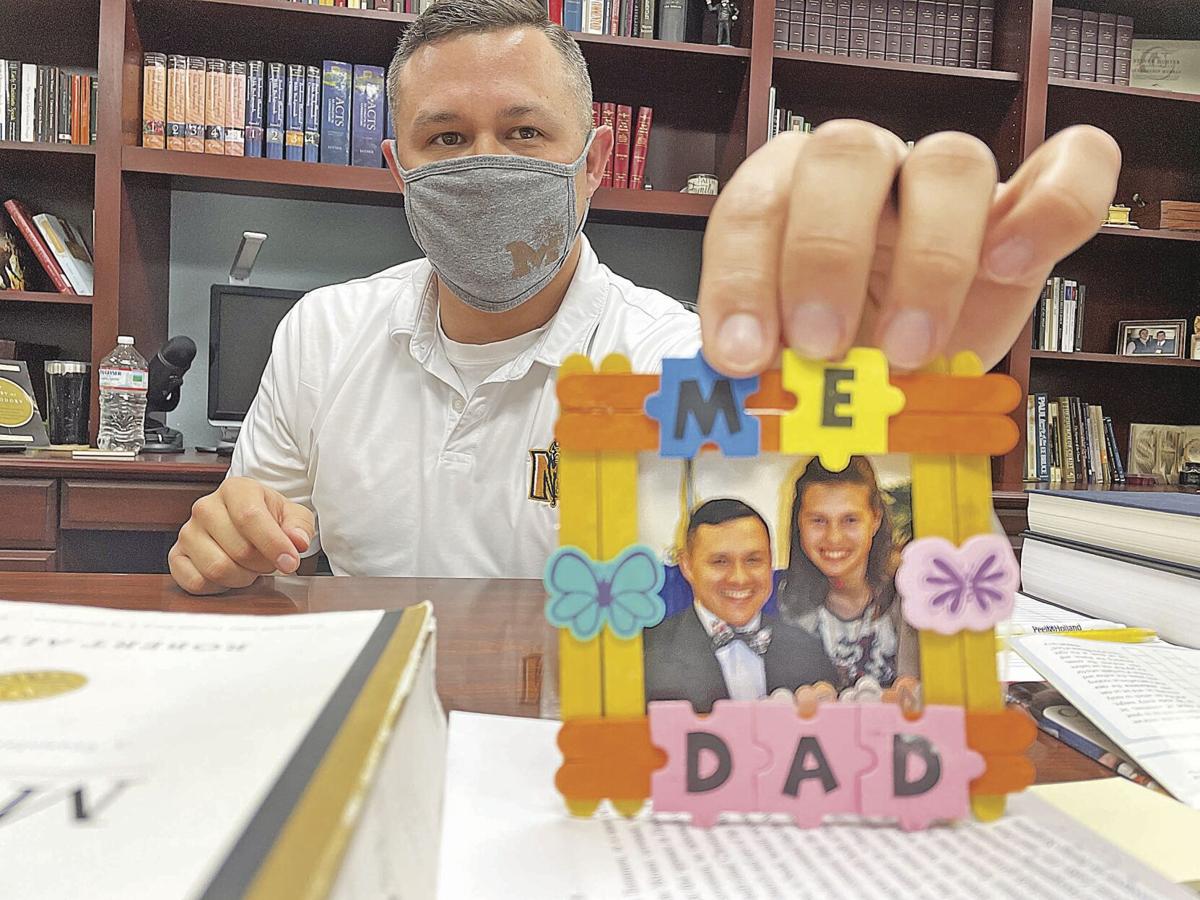 Steven Hunter shows a photographic display of himself and daughter Bri that was taken when Bri was in eighth grade. At that time, he said no one had an idea that Bri would become a National Guard military police officer based in Washington at only 19. 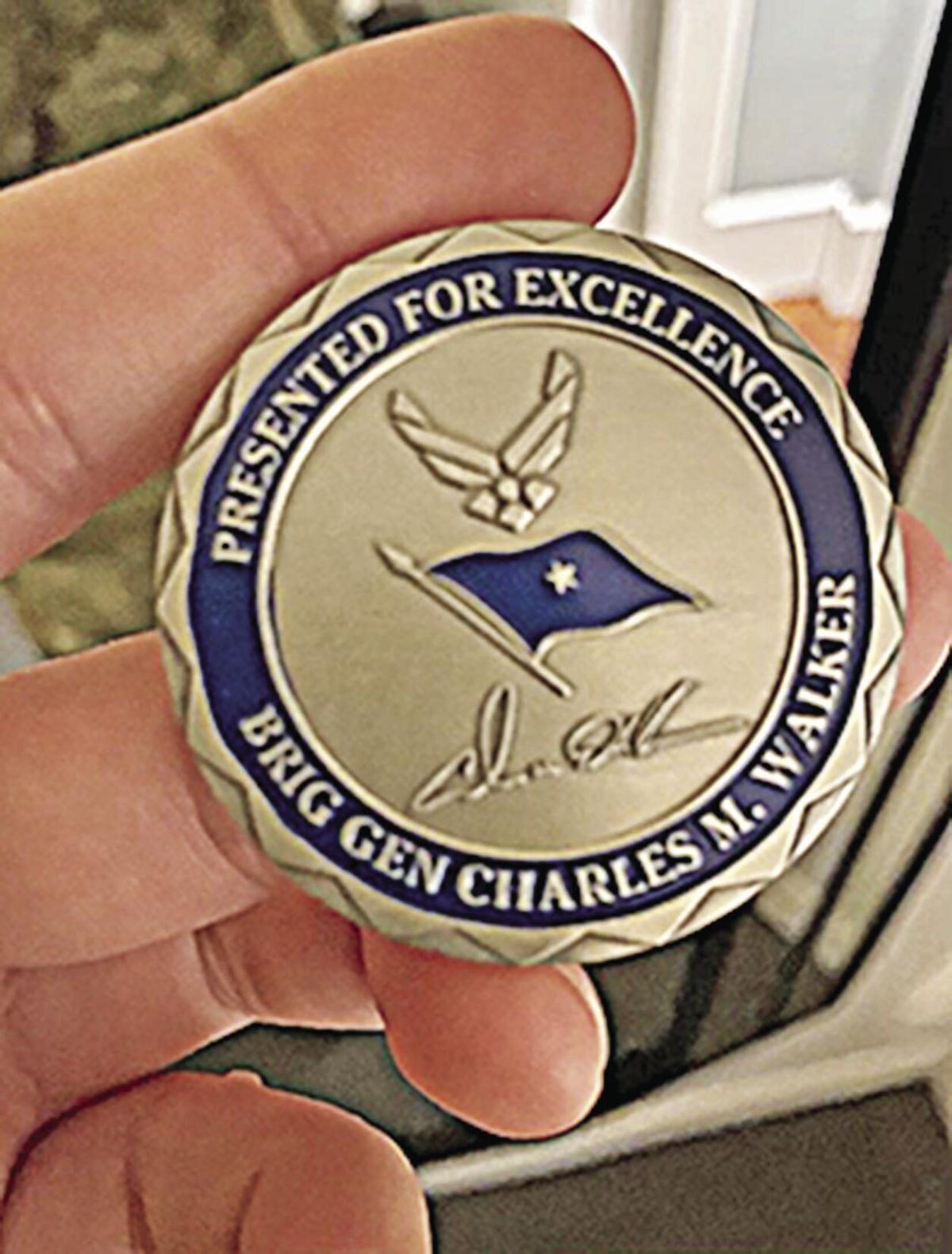 This is one of two medallions that Calloway County's Bri Hunter has earned during her duty with the Kentucky National Guard. The one pictured was part of her earning the leadership award for her class during basic training in 2020 at Fort Leonard Wood, Missouri.

Steven Hunter shows a photographic display of himself and daughter Bri that was taken when Bri was in eighth grade. At that time, he said no one had an idea that Bri would become a National Guard military police officer based in Washington at only 19.

This is one of two medallions that Calloway County's Bri Hunter has earned during her duty with the Kentucky National Guard. The one pictured was part of her earning the leadership award for her class during basic training in 2020 at Fort Leonard Wood, Missouri.

WASHINGTON —  She has not seen the world yet, however, having just turned 19 a week ago, Bri Hunter has seen and done more than most people her age. Not only has she endured basic training in the Army National Guard, her duties have now put her in the middle of a very interesting time, in, of all places, the nation’s capital.

Since mid-January, Hunter has been on duty with the 438th Military Police Company based in Murray, This is part of the Guard’s presence in Washington and, specifically, the United States Capitol that followed a riot at that site on Jan. 6 that resulted in the loss of five lives, two of which were police officers.

It is not known when Hunter will come home. When she had a chance to leave Washington in February, she volunteered to stay longer. So, a young woman who had planned to be attending classes at Murray State University by now, is continuing to serve, and has received three promotions, including her latest to specialist (E4) that came in late February.

She initially did not think this kind of life would be for her.

“She received a call from a recruiter during her junior year (at Calloway County High School) and she was asked if she had any interest. At that time, she didn’t,” said Hunter’s father, Steven. “So I told her, ‘Now, just wait, at least hear him out. It never hurts to hear someone out, and you can always say no.

“So, she heard him out and it actually piqued her interest.”

Bri was 17 when she not only listened to her recruiter, but went on to enlist in the Guard. She served one weekend a month through the remainder of her junior and senior years. Then, upon graduating last year, she took a few weeks to enjoy being a teenager, then reported for both basic training and job training at Fort Leonard Wood in central Missouri. She graduated in late November, then waited.

The call for her first duty with the Guard came a few days after the Capitol riot. She said she wished she had been on duty that day.

Her opinion on how she felt about the insurrection is sharp.

“Looking back on it, though, there probably was only so much I could have actually helped with.”

“The thing about that situation is it kind of put into light why we’re actually here,” said Sgt. Matt Damon of the Guard. He is the public affairs officer for the Guard unit currently in Washington. “For all of us, it was a situation of, ‘OK, we’ve heard so many things about ramblings of what could possibly be happening.’ Then that happened and we’re like, ‘OK, this is our job.’ It really comes to fruition at a time like this.”

Once in Washington, Bri said she entered a daily way of life that is quite different from that of Murray and Calloway County. She said it did not take long for her to receive an education on how different life can be.

“One of my first days here, I was walking to a Walgreen’s with a couple of buddies of mine and, as we walked, we saw two (Washington Metropolitan Police Department) officers holding up what looked like a white sheet to put over somebody (who was deceased),” she said. “Then, we get across the street and there’s like this homeless man who had overdosed (on drugs) and he was dead on the street. That’s not something you see every day.

“I live near Kenlake Resort Park (on the Calloway/Marshall County line) where it’s quiet. Here, you’ve got people who are up at like 2 in the morning and they’re running. That’s kind of weird.”

The reason Bri knows about the middle-of-the-night habits of D.C. is because that became her time for performing her duties about a month-and-a-half ago. She is on night patrol and gets to see things hidden from the general public.

“She’s been ‘behind the curtain’ a few times,” Steven said. “For instance, she said the rotunda (of the Capitol) is very neat when there is no one in it. She’s also been at the entrance of the Senate, but she said everything is subject to change from night to night. They try not to put them in the same place for too long, but the biggest thing for her is that she just goes to work.

“For her, she said that ‘going to work’ is to make sure nobody’s, in her words, ‘acting stupid.’ And she has met some interesting characters, but she hasn’t had to put her hands on them yet.

“She’s also had some really cool stuff to happen. She got the chance to meet all of Kentucky’s delegation from Congress and she has met other Congress members from other states. One of the coolest things, though, is she had her hair done by a hairdresser who used to do (former First Lady) Barbara Bush’s hair back in the day. We’re talking about that one day and she said, ‘Yeah, he showed me a picture of him and First Lady Bush (wife of 41st American President George H.W. Bush).”

For the most part, Steven said things have been serene, meaning most days have been free of drama for himself and wife Stephanie, when it comes to wondering how Bri is doing. Exactly a week ago today, though, that was not the case.

An armed man, believed to not be associated with a terror group, crashed a car into a barricade near the Capitol. One United States Capitol Police officer was killed in the crash, while a second Capitol Police officer was injured. The suspect then emerged from the car while brandishing a knife, it was reported. Police then shot him and eventually he died from his wounds.

Bri was asleep, in advance of that night’s duty. Being it was her birthday as well, she had her phone on silent.

“On my birthday, I get lots of texts and calls anyway, but I was able to notice that my phone was ringing off the hook,” she recalled. “Then my team leader called and he asked, ‘Hey! Are you at the hotel?’ I said I was. He then he said, ‘OK, were you asleep?’ I said yeah. Then he says, ‘OK, go back to sleep.’

“Then, a little later, my dad called me and asks, ‘Are you OK?’ I said, ‘yes, I was asleep.’ Then he says, ‘Oh, then do you know what happened at the Capitol?’ I said, ’nope.’ Then it kind of hits me, ‘Ohhhh! That’s why everybody keeps bothering me! That makes a lot of sense now.’”

And as was the case with Jan. 6, Bri wished she had been on duty.

“Yes I do,” she said. “I’m the type that, when I see that something needs to be done, I’m the one who will be like, ‘Oh sure, I’ll try to do stuff,’ and I’ll always  do it to the best of my abilities because I know I can get stuff done.”

Steven said he has a feeling he knows where this idea originates.

“She is a fourth-generation police officer,” Steven said of how his grandfather, an uncle and cousin all served with the Metro Nashville Police Department in Nashville, Tennessee. “And she’s heard stories of me being a reserve deputy (with the Calloway County Sheriff’s Office) and doing ride-alongs. In fact, she’s heard stories about the things that (the other family members faced at times in Nashville). There have been times I come home from a ride-along and I say, ‘Well, there wasn’t much we did out there,’ but there are others where I come home and say, ‘Oh let me tell you what happened today!’

“The other thing is we’re native American, Choctaw to be exact, and something I have heard or read over the years is that indigenous Americans are very eager to serve. As far as a racial group, they have the highest percentage of service in the military and I wanted to do that. I wanted to be in the Marine Corps, become a military police officer in the Marines and then join a civilian police, but God diverted me somewhere else (as pulpit minister at Glendale Road Church of Christ in Murray).

“But she has the same fire. I had another grandfather who wasn’t Choctaw, but he was in the Navy. My great-grandfather was Choctaw and he served in World War II and, during World War I, the first code talkers were Choctaws. We also had a family ancestor who was a patriot in the Revolutionary War and we had others who were in the War of 1812.”

Her desire to serve is leading her to big things, it appears. In less than a year, she has climbed four rungs of leadership in the Guard. In basic training, a woman who initially was not interested in going the Guard route, was given the leadership award out of a class of several hundred recruits.

Then, came Feb. 27, when she received another honor, her promotion to specialist (E4). It came inside the Capitol.

“I thought that was pretty cool,” she said. “I definitely was not expecting to get promoted.

“I was just downstairs with my crew one morning, getting ready to go to work and we were given our orders for the day. Then, as one of the last things said, my platoon sergeant says to me, ‘Oh, by the way, you’re promoted. It actually happened a couple  of days ago, and they’re going to pin you at the Capitol.’

“I hadn’t had my morning coffee yet. It took a minute to process it. Then, a little later, after I had time to wake up a little more, I started thinking, ‘Oh! This is real.’ Being able to be in that room (the Rayburn Room) and get promoted? This was definitely a once-in-a-lifetime opportunity.”

Damon also said that, in the time he has come to  know Bri, the fact that she chose to remain in Washington when most of her fellow soldiers decided to head home was anything but a surprise.

“That is just her nature,” he said.