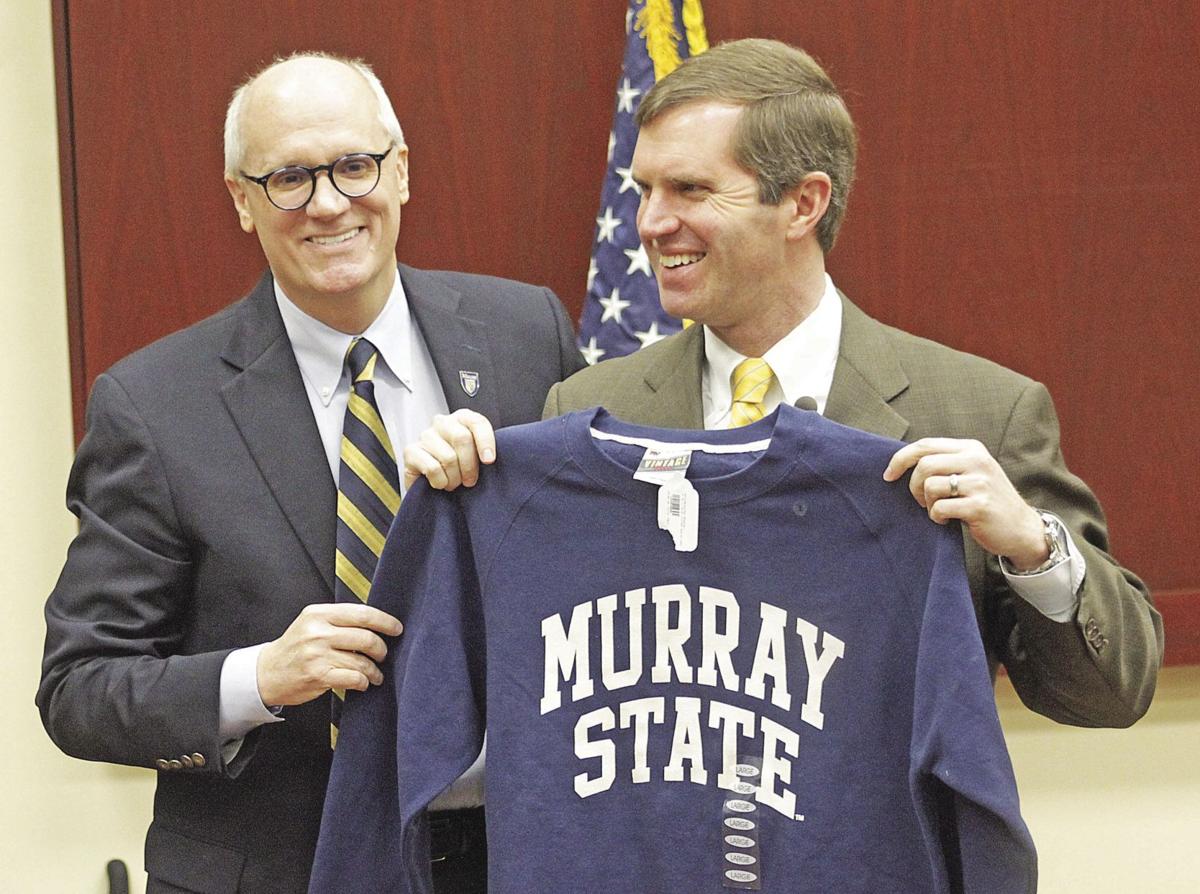 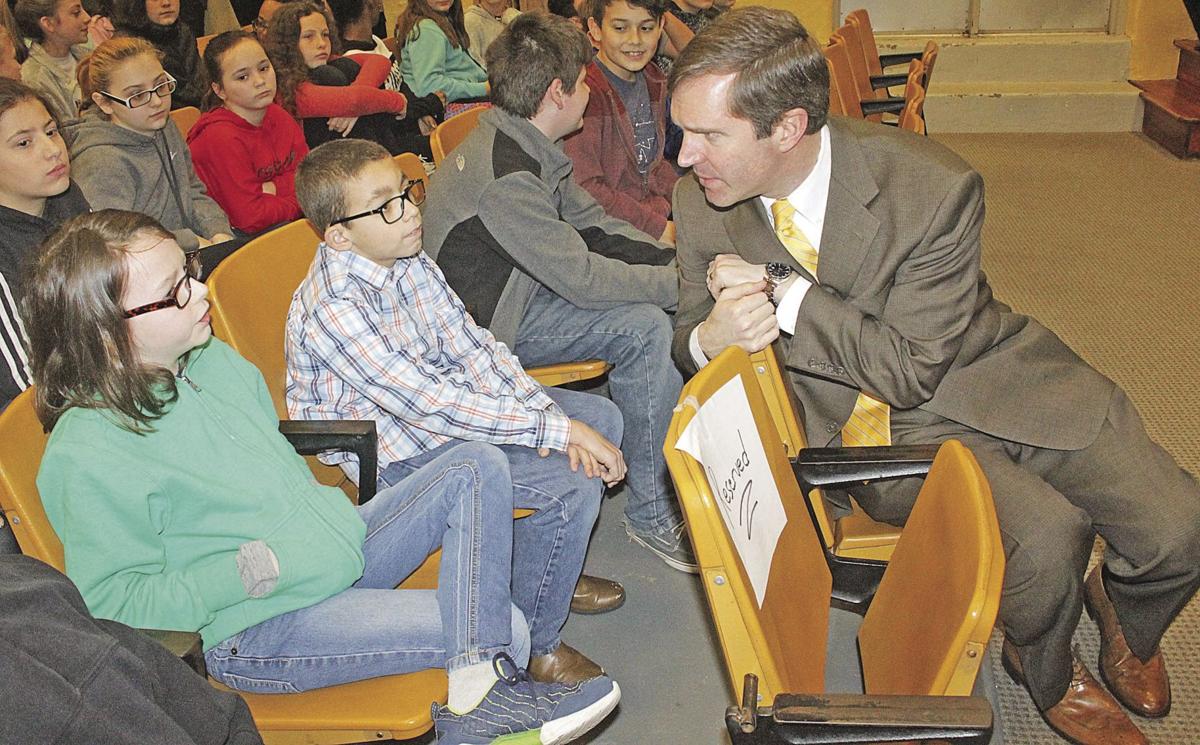 MURRAY — Last week, a large delegation of Murray-Calloway County community and business leaders learned that Kentucky Gov. Andy Beshear has two days of any given week that he will be out of his State Capitol office in Frankfort.

His senior advisor, longtime state lawmaker Rocky Adkins, said that Mondays and Fridays are those days. He also hinted that one of those days was on the horizon and Beshear had a stop on his schedule with which the Murray-Calloway people would be interested. Monday was that day.

For the second month in a row, Beshear, the son of former Kentucky governor and western Kentucky native Steve Beshear, came to Murray, this time to make an appearance at Murray State University, a place that has been hoping for good news out of Frankfort for several years. In a speech at the campus’s Alexander Hall, witnessed by an audience that included some people from outside Murray and Calloway County, Beshear said better days are coming for Murray State and other regional universities.

“You know, for 14 years … 14 years … we have had to make deep, difficult cuts each and every year and we went past the fat and we cut deep into the bone,” Beshear told an overflow crowd at the Alexander Hall Auditorium. “It hit our universities especially hard and made it harder for some of our kids to go to college. Those are lost opportunities. After 14 years of these painful cuts, I was able to offer the first budget in over a decade that makes no new cuts whatsoever, and we’re really excited about that.”

This announcement earned a strong round of applause from the audience.

“This is my second trip to Murray since I was inaugurated,” he continued. “Do you remember the last time a governor has been to Murray twice in two months? That’s because of how important western Kentucky is to me, and today it’s exciting to be on the campus of Murray State University and especially to be standing here inside its education college. I’m also very excited to see the number of officials from other communities here, and I think it shows you how important this institution is, knowing the relationship you have with your graduates and the programs here do more than help a city or county, they help grow an entire region.

“And I love that we are in the college of education. My dad grew up an hour east of here (in Dawson Springs in Hopkins County). He is a first-generation college graduate for his family. Every time you graduate someone from Murray State or a first-generation high school graduate, it changes every generation after that going forward.”

Introducing Beshear, Murray State President Bob Jackson recalled how he was in Frankfort for the governor’s budget address a few weeks ago and remembered being pleased with what he heard that night.

“We appreciate his support of public education. It was an education-first budget and, for Murray State University, what that meant was the first increase in appropriations in 12 years … 12 years!” Jackson said of Beshear’s 1% proposed increase. “It also includes a higher education resurgence fund, which talks about deferred maintenance, and our board has been very supportive of that. Many of our buildings are approaching 100 years old.”

The governor also said that universities such as Murray State are on the front line of Kentucky’s pursuit of rising from the bottom of American states when it comes to per-capita income for its families. Kentucky currently ranks 47th.

“We’re the third-worst state in the country. That means our families take home the third-worst paycheck amounts in America,” Beshear said. “Per-capita income lines up almost directly with educational attainment, so what you all are doing at this university isn’t just a mission of the university. It ought to be the mission of this state.”

Beshear was in Murray Monday about two months removed from the university’s most successful fundraising effort in history. It was called Racers Give, which was created after Jackson opted to forego an investiture ceremony, a custom for recently-named presidents. Instead of holding that ceremony, the approximately $30,000 raised was donated for needs-based scholarships. Racers Give, originally planned to last a week in early December, was extended to the end of the year and ended with more than $217,000 raised from contributions on numerous fronts, mainly alumni.

Beshear said his budget, if passed by the Kentucky General Assembly, would help that cause more.

“There’s even more good news, and that good news is for your students. This budget has more scholarship dollars than ever in history,” he said of how state lottery revenue is the driver of that revenue. “We’re going to be able to provide scholarships to 60,000 Kentucky students, and it gets a little better than that. If you believe, like I believe, that one of our main goals in government and education is to break cycles of poverty, we’re going to be able to provide 7,300 more need-based scholarships than we did in the last biennium. I’m very excited about those students we’re going to help, those first-generation college students or those students whose parents decided to do jobs that help their communities, that have given up what might be an easier road to send their kids to college to help out other people.”

With several local education districts’ officials in the audience, he also talked about K-12 public education, specifically its teachers.

“Seventeen other states (including Georgia, Alabama and Mississippi) have given their teachers raises,” he said, then announcing a $2,000 across-the-board raise for all Kentucky teachers. “Our teachers have more than earned the right to not live in poverty or to have to drive an Über at night for the good work they do.”

Speaking of earning, Beshear also said that goes for universities like Murray State.

“You know? Whenever we put money into a budget, I hate it when people say that we’re ‘giving’ that money, because this university has more than earned these funds,” he said, addressing the 1% increase in appropriations. Murray State has lost about $11 million in appropriations funding since 2007, taking it to $44.6 million. “Yes, it’s 1%, but it’s a start. It puts us on the right track to continue funding in the future.

“And you have my commitment that I’m going to try to do that every budget that I’m governor.”