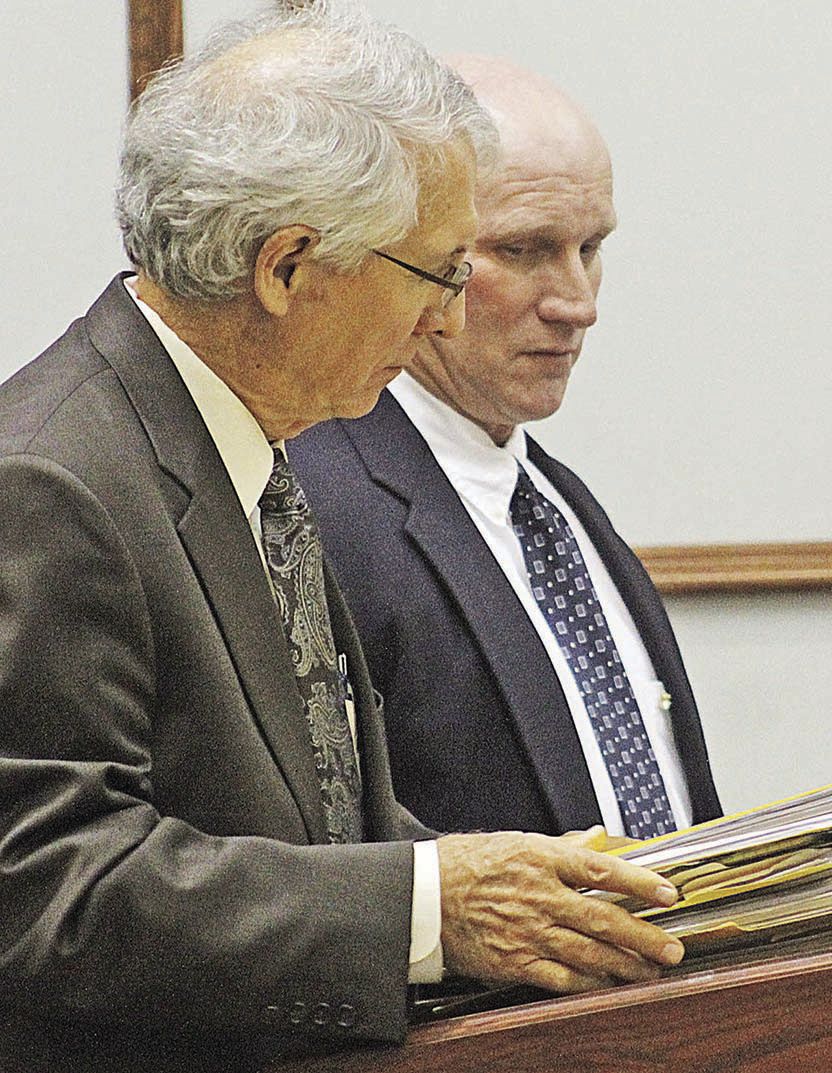 Mark Boggess, right, is pictured Tuesday afternoon at the defense podium with his attorney Gary Haverstock in Calloway Circuit Court in Murray. Boggess entered a guilty plea on multiple charges of possessing/viewing of matter portraying a sexual performance by a minor, as well as voyeurism that could bring 10 years in prison. 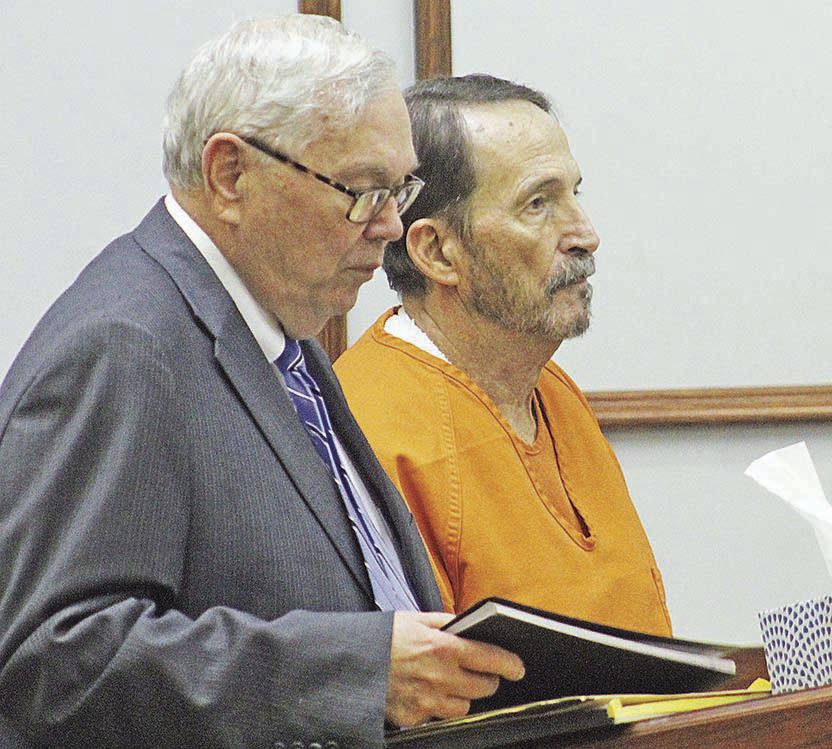 Joseph Bolin, right, is pictured with attorney Dennis Null Tuesday afternoon in Calloway Circuit Court in Murray. Bolin was in court for his arraignment on new charges accusing him of theft by unlawful disposition.

Mark Boggess, right, is pictured Tuesday afternoon at the defense podium with his attorney Gary Haverstock in Calloway Circuit Court in Murray. Boggess entered a guilty plea on multiple charges of possessing/viewing of matter portraying a sexual performance by a minor, as well as voyeurism that could bring 10 years in prison.

Joseph Bolin, right, is pictured with attorney Dennis Null Tuesday afternoon in Calloway Circuit Court in Murray. Bolin was in court for his arraignment on new charges accusing him of theft by unlawful disposition.

MURRAY — A former Murray High School star athlete who went on to a long tenure as a teacher and coach at his alma mater entered a guilty plea Tuesday to multiple charges that he filmed students in a campus bathroom.

Mark Allen Boggess, 54, of Murray, entered his plea on eight counts of possessing/viewing matter portraying a sexual performance by a minor and eight counts of voyeurism. The plea brings with it a possible prison sentence of 10 years, which prosecutors say will be their intent when Boggess is sentenced on March 19.

Boggess resigned from his position with the Murray Independent School District in late April, just days after Murray police arrested him after the discovery of a video camera that had been mounted inside a bathroom on the Murray High campus. The camera had been discovered by campus staff.

A complaint warrant in the case indicated that several students appeared on the videos that were recorded. It also said Murray High officials told police that, as they viewed the contents of an SD card that had been found in the camera, they said that Boggess himself appeared on the video, perhaps during the setup process.

MISD Superintendent Coy Samons said Boggess had been employed at Murray High since 2009. Along with his teaching job, he also was the school’s track and field coach and led its teams to several state championships.

“We feel like, given the nature of those crimes, we think justice will be served,” said Calloway Commonwealth’s Attorney Dennis Foust after Tuesday’s plea was entered. “In that type of case, a lot of people would like to see (a heavier punishment). We’re certainly not recommending probation, and that’s in (Calloway Circuit Judge James T. Jameson’s) province.

“But this is not a case where someone is going to just get their hand slapped and get out (of prison) in short order on parole. Those types of cases go through a sex offender program. He also has to register (as a convicted sex offender) for the rest of his life. It takes a long time just to get into that program and it takes a long time to get out of it.”

Foust said he fully expects the defense to give a strong argument for probation and no jail time. Boggess has no prior criminal record.

“We will argue just as passionately,” he said, adding that, while this is not a case in which victims were physically abused, he said victims were violated. “In some ways, what you had here was worse. You had people who were violated and didn’t know it.

“We don’t want to improperly prosecute anybody. Obviously, we are seeking the truth, but in this case, the truth is clearly on our side. You have the video evidence.”

Three other cases came to Calloway Circuit for the first time Tuesday, with one involving a former Murray attorney who was just weeks removed from entering a plea to a case in which he allegedly illegally took nearly $1 million intended for families’ estates.

However, with the findings of a Calloway County grand jury that Joseph Bolin allegedly took an additional more than $150,000 in a pair of new cases, he found himself back in court for his arraignment on the new charges. Bolin’s attorney, Dennis Null, said Bolin would enter a not guilty plea and waive formal arraignment.

Bolin, who was sentenced to 10 years in December, will return to Calloway Circuit on March 5 for a pre-trial conference.

Another murder case was on the docket Tuesday as Kim Deneyar Puckett, who is accused in the death of a Murray man in late November, made her initial appearance in Calloway Circuit. She faces a murder charge, as well as a second-degree burglary charge for her alleged role in the death of Rickey Puckett on Nov. 24 at an apartment complex at the intersection of South Fifth and Elm streets.

In addition, Charles Harding, who is believed to have struck Rickey with a blunt object on the day he died, was also arraigned Tuesday. Harding faces a charge of second-degree assault in the case.

Both Kim and Harding entered not guilty pleas and waived formal arraignment Tuesday. They will both return to Calloway Circuit on March 5.