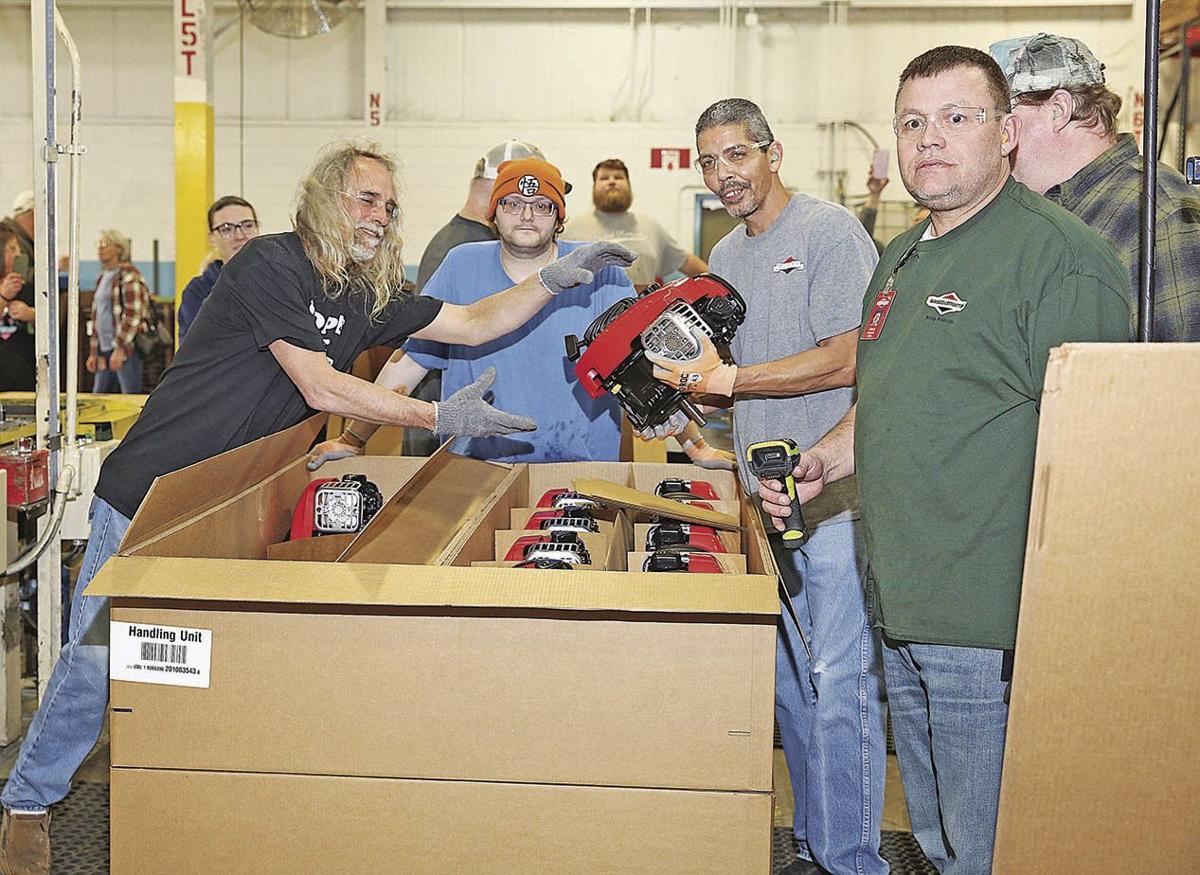 The last engines for the respective assembly lines of Murray's Briggs & Stratton plant were completed and shipped from the facility Friday afternoon. The team that completed the final engine for Line 51 is pictured. From right are: Jeff Durham; Chris Paschall; Carlos Cartagena and Alex Aizpurua. 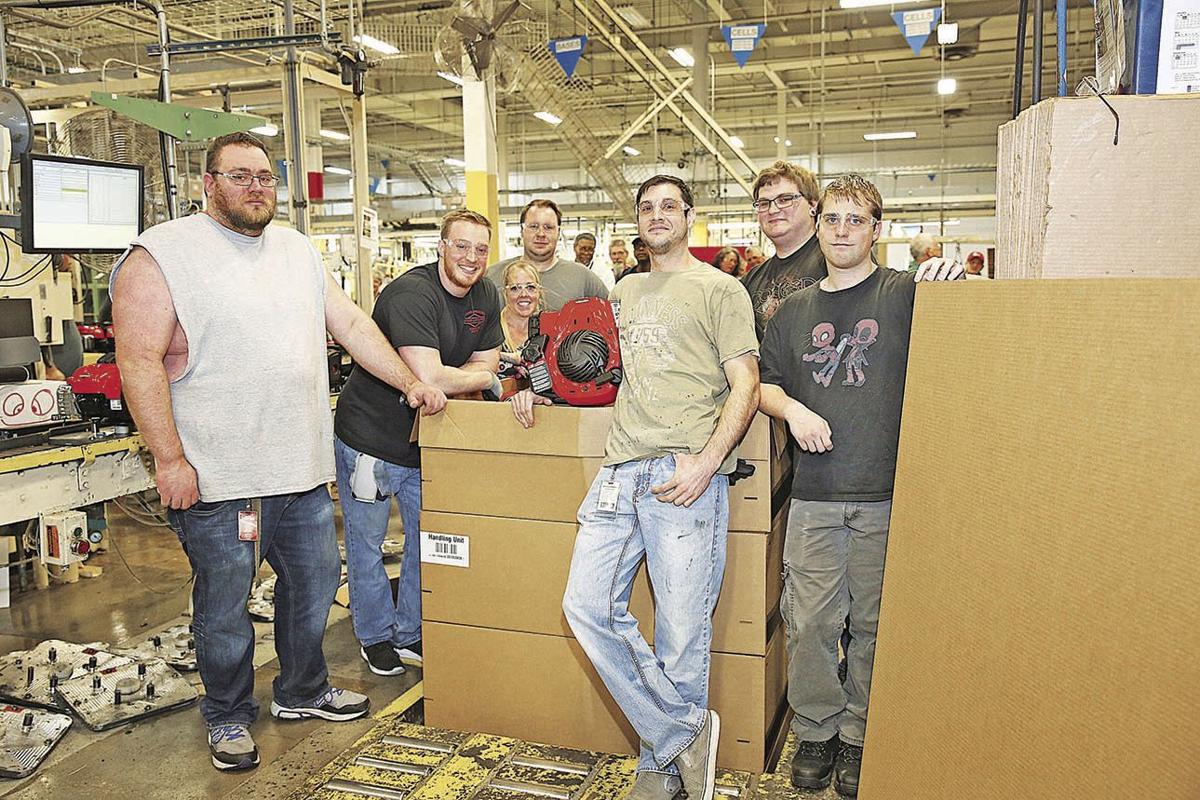 The last engines for the respective assembly lines of Murray's Briggs & Stratton plant were completed and shipped from the facility Friday afternoon. The team that completed the final engine for Line 54 is pictured. From right are: Jeff Smith; Travis Tucker; Valerie Miller; Tim Johnson; Patrick Veatch; Dylan Miller and R.J. Welch.

The last engines for the respective assembly lines of Murray's Briggs & Stratton plant were completed and shipped from the facility Friday afternoon. The team that completed the final engine for Line 51 is pictured. From right are: Jeff Durham; Chris Paschall; Carlos Cartagena and Alex Aizpurua.

The last engines for the respective assembly lines of Murray's Briggs & Stratton plant were completed and shipped from the facility Friday afternoon. The team that completed the final engine for Line 54 is pictured. From right are: Jeff Smith; Travis Tucker; Valerie Miller; Tim Johnson; Patrick Veatch; Dylan Miller and R.J. Welch.

MURRAY — Fittingly, it rained Friday in Murray, providing seemingly the perfect backdrop for a sad day.

It was at about 3:30 that afternoon that an era came to an end. That is when about 300 workers from the Briggs & Stratton plant on the east side of the city’s downtown area went to the parking lot to leave for the day – only this time, it was for good. Friday marked the second round of layoffs for the plant, but this time it included something else.

The final engines that will ever be shipped from this place, a large complex that once housed the Tappan appliances plant and became Briggs & Stratton in 1985, were sent into the world. And with that, the final chapter was written: a total of 91,650,827 small engines, mainly for push lawn mowers, had been built at the Murray plant.

“Say that again?” asked Calloway County Judge-Executive Kenny Imes, clearly not believing the figure. “Wow! That’s just astounding. I don’t think anybody realizes that. But, more importantly, the employees they hired down there produced over 91 million of those things that have gone worldwide. That means we have contributed to the overall economy of not just Calloway County, but the region, and consequently the United States.

“I remember some years ago when they were rolling them off, and back then, it was the 10 millionth or whatever. You hate to think that’s over.”

The first round of layoffs came in October, about two months after Briggs & Stratton announced the pending closing of the Murray plant, which employed about 630 workers at that time. The first half of those workers departed in October. Now, only a skeleton crew will remain to handle the closing process for the plant, which is expected to be completed by about June.

The knowledge that the Murray plant had compiled the record it has in its 30-plus years did little to cushion the blow that so many people, many of whom call Murray and Calloway County home, are now feeling. Murray Mayor Bob Rogers remembered back to August when the news came from Briggs & Stratton’s home office in Milwaukee, Wisconsin that the Murray operations were being moved to Poplar Bluff, Missouri.

“The day they made that announcement, we were kind of hit in the face,” Rogers recalled Friday, admitting that he actually had let Friday’s second layoff day sneak up on him, perhaps on purpose. “Oh my gosh! Today is the day for that, isn’t it? You know, maybe it’s because I didn’t want to remember, but yes, it is a sad day for a lot of folks who won’t have a job to go to on Monday.”

Murray-Calloway County Economic Development Corporation President Mark Manning knows exactly how the Briggs & Stratton workers are feeling. Friday, he recalled his own uncertainty more than 30 years ago when he lost a job as a field laboratory technician in the oil business when the field – suddenly and without warning – died. It left him out of work in Oklahoma, just after he had been married.

“I was trying to think … what should I feel like today?” Manning said, then returning to his personal battle with job loss. “I know how bad it hurts, on a personal level. I’m not just saying, ‘Oh, I feel for you.’ No! I’ve been there.

“When I say the business died, I don’t just mean the company I was working for, but overnight, the entire business just went away. So I thought, ‘OK, I’ll just go out and find another job, but it wasn’t like it is now, where people are actually hiring. It got to the point that I would take anything, just because my self esteem and confidence had been destroyed, and it had nothing to do with anything that I had done or hadn’t done, but I felt that way. I felt like I had failed.”

Manning eventually climbed out of that situation, and he said he believes the same will be true of the Briggs workforce because it consists of a wanted commodity. He added that in addition to the Briggs workers now being available, he believes that the way the community has tried to come to their aid is also something a prospective company can use in determining if Murray and Calloway County is worthy of welcoming what they would bring.

“I’m really proud of the way so many different organizations in our community have rallied, along with individuals,” Manning said, specifically pointing to a Facebook post he saw this week. “I was just practically brought to tears when I looked at Facebook and somebody was talking about planning to bring barbecue out to the plant one day this week, and I think (The Big Apple Cafe) is having some kind of event (Friday night).

“We have consciously worked as a community to maintain a positive relationship with the company because there’s no benefit to anyone in trashing the company on its way out of town. First of all, how’s that going to look to others wanting to relocate here? We can’t ignore the fact that Briggs & Stratton has been an outstanding community citizen here for many years.”

Though Manning said he couldn’t care less about the engine compared to the plight of the now-former workers at Briggs & Stratton, he did pause for a second to acknowledge the work that had been done in Murray.

“That’s a lot of aluminum isn’t it?” he said, before returning to his most important issue – finding places for these workers, and if possible, for it to happen in Murray. “What we really have to understand is that these people are the most valuable asset we have as a community. You have to look at them as an underutilized asset and we have to find someone who can use what we have.”