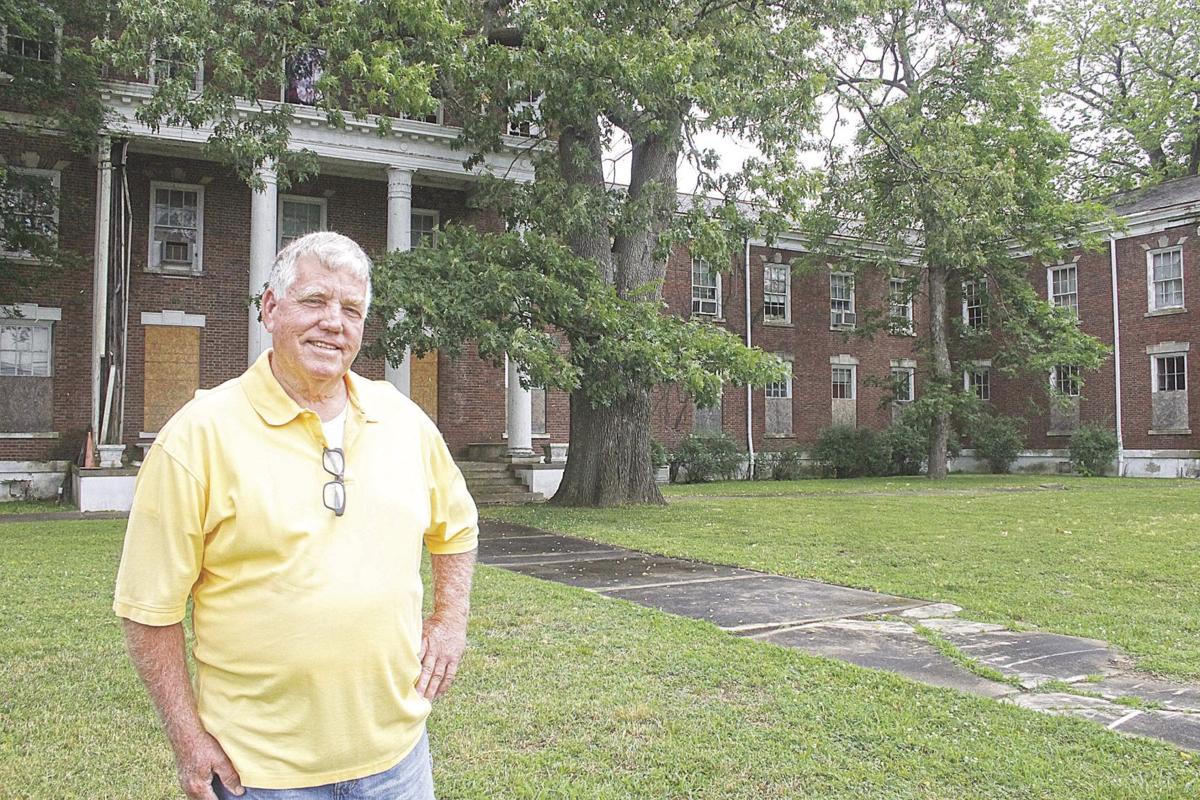 Mike Conley of New Concord stands on the front lawn of the historic Katterjohn Building Saturday in Paducah's Mid-Town area. Conley had the highest bid Thursday in an auction of the property, which formerly housed one of three hospitals in Paducah that were run by railroad companies. 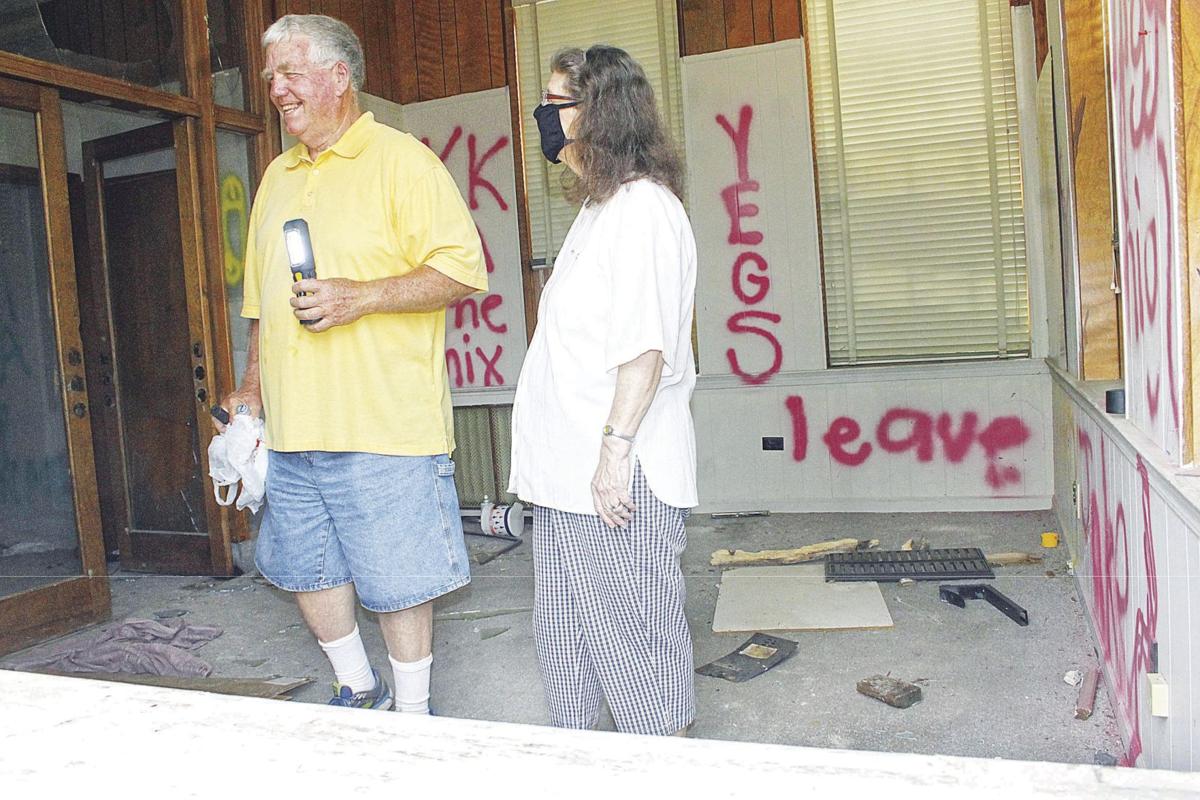 Mike and Nancy Conley explore the inside of one of the first-floor rooms that used to house offices inside the Katterjohn Building in Paducah. This particular room has fallen prey to vandals who obviously have taken a liking to marking their territory with spray paint.

Mike Conley of New Concord stands on the front lawn of the historic Katterjohn Building Saturday in Paducah's Mid-Town area. Conley had the highest bid Thursday in an auction of the property, which formerly housed one of three hospitals in Paducah that were run by railroad companies.

Mike and Nancy Conley explore the inside of one of the first-floor rooms that used to house offices inside the Katterjohn Building in Paducah. This particular room has fallen prey to vandals who obviously have taken a liking to marking their territory with spray paint.

PADUCAH — Mike Conley said he went to Paducah Thursday merely to observe the auction of a building that is one of the most recognized in that city.

The Katterjohn Building, located in the Mid-Town area of the city, has stood along Broadway since 1919 when it served as the largest hospital between Chicago and New Orleans for the Illinois Central Railway. It was up for auction last week, so Conley – who still runs an active real estate business in Calloway County, having formerly been in the auction business as well – decided to see what would happen.

After all, he and his wife, Nancy, were in Paducah that day on other business anyway. What could come from attending the auction and having a look? Plenty, it would seem.

“Well, it was just going too cheap,” Conley said Saturday, as he stood on the front line of the 29,000-square-foot, three-story structure that he purchased with a winning bid of $9,200 during the auction Thursday. “We were just watching it, sitting in the car, and it was one of those things where I wanted to be there out of curiosity, just to see what it bought.

“So we’re listening to the auctioneer’s opening remarks and when he started the bidding he began rattling it off and I think he started somewhere around $100,000 and just kept backing up and backing up and he kept backing up. He could not get a bid. So somebody, I guess jokingly, offered a dollar, then somebody else finally went for $2.”

By then, Mike said he was out of his car and heading over to the socially-distant throng of 20 or 25 observers. Pretty soon, the price had reached $200 and he said he could not resist. Once in the bidding, he said he became engaged in a duel with another bidder, until they reached $9,200.

“There were people from the historical society who there and they talked to me because they’re hoping somebody would get it that could do something with it. I’ve probably had four or five other people contact me about it since the auction too, including members of the family the building is named for who gave me some interesting history about it,” Mike said. “A family member sent me an email talking about how his uncle (believed to be F.W. Katterjohn) came here with $250,000 and a suitcase and purchased this building.

“I don’t know what the exact date was on that, but I guess that’s what started it for them.”

Saturday, Mike and members of his family made the hour-long drive from New Concord to Paducah to get an up-close look at the property that, after some legal details are finalized, will officially become Mike’s property in about three weeks. What they saw told a story of how truly daunting of a task lies ahead in returning the building to anything resembling the prominence it has in Paducah’s architectural history, as well as the sadness of why it has fallen into disrepair.

Throughout the building, evidence of the severe wear and tear that has accelerated since its electrical system was disconnected, believed to have been about 10 years ago, was evident. Damage is seemingly everywhere, including on the roofs of the multi-wing structure, which was not repaired after the 2009 ice storm that devastated western Kentucky.

Also, there is the disturbing evidence of how vandals have managed to find their way into the building, marking their territory with spray paint. At the rear of the building, an examination table, perhaps left from the time the building served as one of the main medical office complexes in the city, was placed at the base of a first-floor window, the glass of which was gone. This is believed to be one of the ways vandals have entered the building.

“It’s a shame that it’s been left to get into this condition,” Nancy said, just before she and other family members accompanied Mike into the building for a lengthy tour.

“They tell me there is a basement here, so I don’t know if it’s full of water, or has alligators in it,” Mike said, after emerging from one of two smaller buildings at the rear of the main building. “I’m guessing this had the boilers for the electricity. We didn’t find anything unusual in there, although we did find a whole bunch of law books (from when the Katterjohn Building also was home to several attorneys’ offices.”

Near the end of the time the building was still operational, Ronnie and Shana McCoy were part of a rock’n roll band that was able to rent a room in the third-story penthouse area for rehearsals. Saturday, they returned to provide video documentation of the building for a channel Ronnie has on YouTube called “Abandon West Kentucky,” which highlights numerous buildings throughout western Kentucky that are in need of major renovations.

“It was in so much better shape then,” she said, adding that the boiler building also was a rehearsal venue. “Yeah, and it had a working bathroom then too.

“I definitely hate to see what’s happened, and it would be sad to see it go.”

However, Mike said a remedy for the property may not be demolition and rebuilding. He said he has learned that the building resides in a no-demolition zone with the city. Also complicating matters is that half of the building is zoned commercial, while the other half, closest to Jefferson Street in the rear portion, is zoned residential.

“This is a huge lot. It’s got a little over 3 acres on it,” said Conley, who said it has not taken long to realize something. “If this is depending on my personal money to (bring the building back to life), it’s not going to happen.”

He said he has been told that as much as $4 million would be needed to renovate the property. However, he did not rule out being part of the process to return the building to its former self.

“It would take sharing the costs. Also, we may have to look at public funding, which may be scarce these days,” he said. “Time will tell.”

However, for now, and once the legal paperwork is completed, this is Conley’s building, meaning he is in position to continue a trend of people with Calloway County ties returning Paducah structures to their former glory.

This includes the former Coca-Cola bottling plant, also in the Mid-Town area, on which Murray State University alums Ed and Meagan Musselman led the charge for its transformation. That plant also has other Calloway County ties, as it was Kirksey native Luther Carson who brought Coke to western Kentucky many years ago.