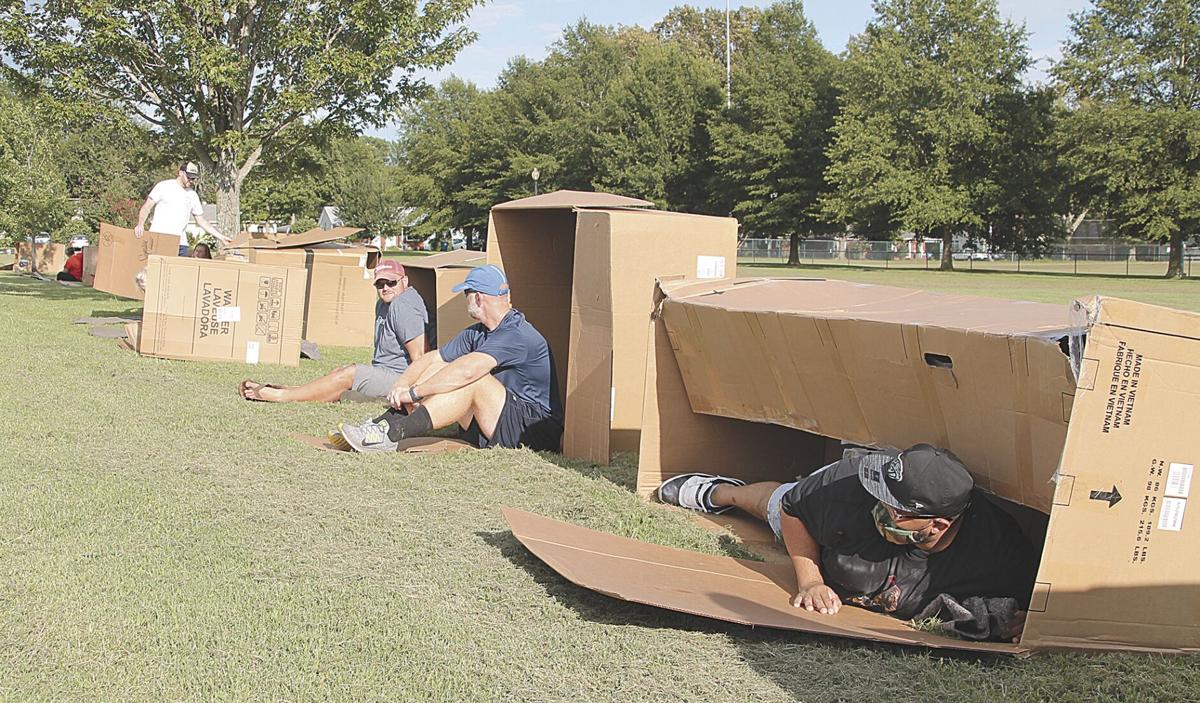 Jamaal Gardner of Murray, right, tries to shield himself from the sun during Friday's Night on the Town event to raise money for the Murray Calloway County Homeless Coalition. Also pictured are Murray residents Paul Corder, seated at left, and Rudy Ottway. The event was moved this year from Murray's court quare to Chestnut Park, and is also meant to spread awareness of the problem of homelessness.

Tyler Cope, left, Kristin McNutt and Rachel Ross spread out on the grass with their box dwellings as traffic passes by on Chestnut Street. 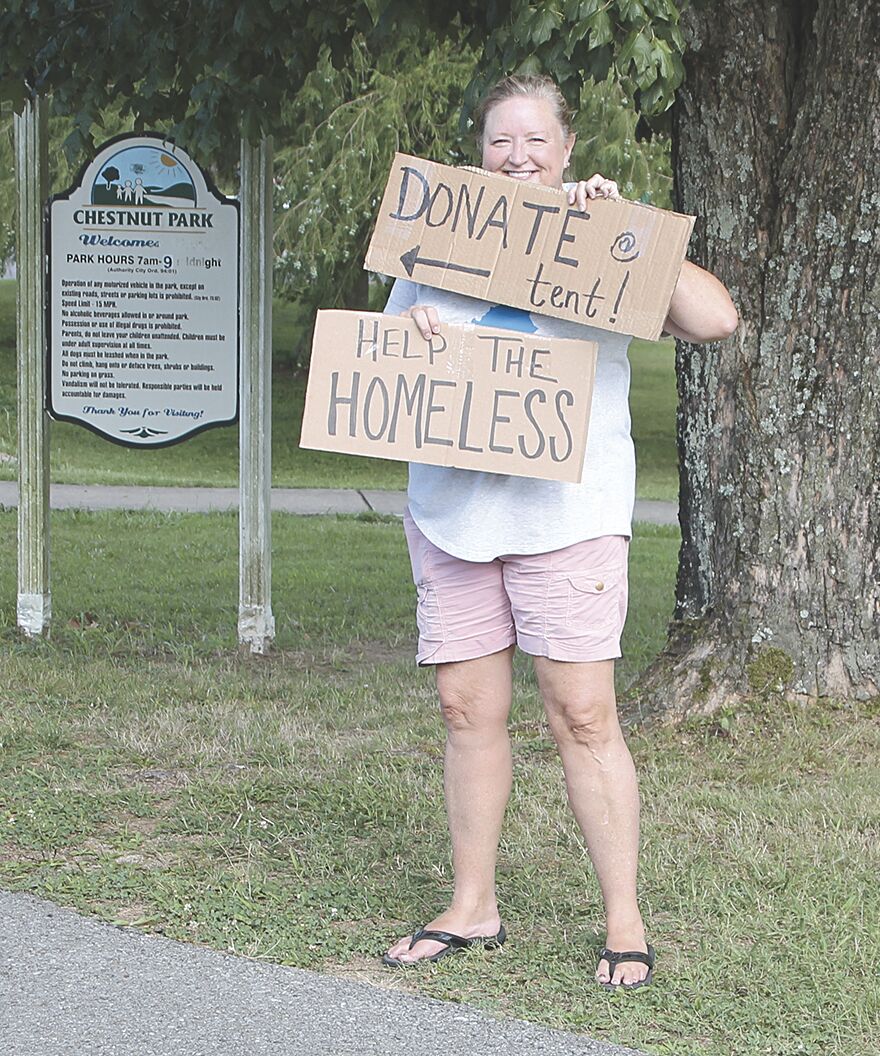 Holly Bloodworth holds up donation signs at the entrance of Chestnut Park during Friday's Night on the Town event.

Jamaal Gardner of Murray, right, tries to shield himself from the sun during Friday's Night on the Town event to raise money for the Murray Calloway County Homeless Coalition. Also pictured are Murray residents Paul Corder, seated at left, and Rudy Ottway. The event was moved this year from Murray's court quare to Chestnut Park, and is also meant to spread awareness of the problem of homelessness.

Tyler Cope, left, Kristin McNutt and Rachel Ross spread out on the grass with their box dwellings as traffic passes by on Chestnut Street.

Holly Bloodworth holds up donation signs at the entrance of Chestnut Park during Friday's Night on the Town event.

MURRAY – Before the COVID-19 pandemic, the Murray Calloway County Homeless Coalition had already planned to move Night on the Town to Chestnut Park. As it turned out, it was the perfect location for participants to spread out and socially distance while also raising money and awareness of the local homelessness problem.

The event involves volunteers spending several hours in makeshift cardboard “dwellings” to give them a sense of what it might be like to not have an actual home. Box dwellers started out in the shade closer to a line of trees before one of the participants suggested moving closer to Chestnut Street to increase their visibility to passing traffic. This, of course, meant being less comfortable, but of course, that was the point of the evening in the first place.

Jennifer Riley, president of the Murray Calloway County Homeless Coalition’s board of directors, said last year’s inaugural event raised $36,000, and this year’s goal was to raise $30,000.

“We did not increase our goal because we are in the midst of a pandemic and we understand that times are tough,” she said. “So we actually decreased it a bit, but that’s OK. Last year was the first year we did it and we had no idea what to expect. We anticipated that we could raise about $20,000, so we very much exceeded that goal last year and were very surprised and humbled and appreciative of the community.

“The community’s coming through again; we’ve already (as of Friday) tallied over $20,000 and we still have donations coming in (that night) via Facebook and we have drive-through donation spots (in Chestnut Park) and people are being generous.”

Riley said the funds would pay for several of the coalition’s initiatives, including education of clients and emergency services like paying for a brief stay in a hotel. Opportunity House, which provides temporary housing, has been open on Sixth Street for a little over a year, and Riley said the organization had also partnered with Gentry House, which provides coaching – basically case management – for the coalition’s clients to try to get them back on their feet. Nathan Carter is the executive director of Gentry House.

“We have been working very closely together as two of the organizations in the community that focus on homelessness,” Riley said. “It’s been a great partnership, and we actually have some fun announcements about that partnership that are going to be coming in the next few weeks, so stay tuned for that.”

Riley said Gentry House and the Homeless Coalition joined together after the start of the pandemic to contribute to a fund to provide rental assistance to families that had suffered job losses because of the virus. She said the two organizations had spent a combined $10,000 on rental assistance to prevent homelessness.

“We know that even though the governor has said that people can’t be evicted for a two-to-three-month period, they’re still going to owe that rent,” Riley said. “We didn’t want to get three months down the road, and all the sudden, all this rent is due and people don’t have it because they’ve lost their jobs or been furloughed.”

Riley said the location change from the Murray’s court square to Chestnut Park had already been planned because so many people came last year that it quickly became crowded. The roads around the courthouse were not blocked off for the event, and the coalition thought Chestnut Park would not only have more room, but would also be safer since participants would be away from the traffic. Perhaps most importantly, it is much more visible to passersby because Chestnut Street is one of the most-traveled roads in town, so it got the message out more effectively.

Riley said the park system had been very accommodating. Due to the state’s current restrictions on large gatherings, only 30 box dwellers and the planning committee were at the event, she said.

Jamaal Gardner of Murray laid down inside a long cardboard box as he tried to shield himself from the sun.

“I heard about it last year, and my co-worker did it,” Gardner said. “It’s for a really good cause and I can’t imagine what the homeless go through. You just try to feel what they feel like for a day. People think they have it bad until they put themselves in (the place of a homeless person), and then they realize they’ve got it really good. You don’t realize how blessed you are. People take things for granted.”

The event started at 5 p.m. and Gardner said he planned to stay until the 11 p.m. close of the event.

“I work at a grocery store during a pandemic; this is nothing,” said Gardner, who works at Kroger.

Rudy Ottway of Murray said he was not involved last year but he goes to church with Riley and she asked him to participate this year.

“You can’t really say no to both of them,” Corder said with a chuckle. “For me, it was an opportunity to get out and raise awareness in a real unique kind of way. Obviously, it’s different being in our current climate, but we can be out here and still sit right on Chestnut and still have hundreds of people drive by and see what it is we’re doing and why we’re doing it. It’s worth it.”

Rachel Ross of Murray said this was also her first time being involved with the event.

“One of my goals for this year was to try to get more involved in the community, and I knew (about this) event and I had some friends that were heavily involved,” Ross said. “That inspired me to look into it. We’ve been out here an hour and it’s really hot. It’s a harsh reality that some people struggle with this all day, all summer, all winter. I don’t know whether it’s worse to be hot or cold; neither is fun. We’re at least given a snack and a box and a blanket and pillow, and some people don’t even have that.

“To me, there’s no better way to empathize and understand why people are trying to raise money for something than putting yourself in somebody’s shoes, and I think the leaders of this event do a really good job of pushing you into a harsh reality. It’s one thing to donate to something, but it’s another  to really think about the hardships of the people you’re trying to help.”

“I did this because I’m born and raised in Murray and I’ve been lucky enough to always have a home and have parents, but that’s not the case for everyone in Murray,” said Kristin McNutt. “A lot of times, we think about big cities where homelessness is a problem, but really, it’s right here in our small community (and involves) people of all ages. I can’t imagine having to grow up this way.”

Tyler Cope said he had had a lot of experience with the homeless population in Murray and started a ministry in which he fills backpacks with essential items and distributes them to his church community at Memorial Baptist Church.

“When we would see someone in need, we would give a backpack to them,” he said. “The backpack would contain a non-perishable food item, a blanket, a Bible and a laminated list of non-profits in town that they could go to. ... Part of (the reason) I’m out here is not only to raise awareness, but just to be a voice for (the homeless) because no one’s really speaking up for them.”