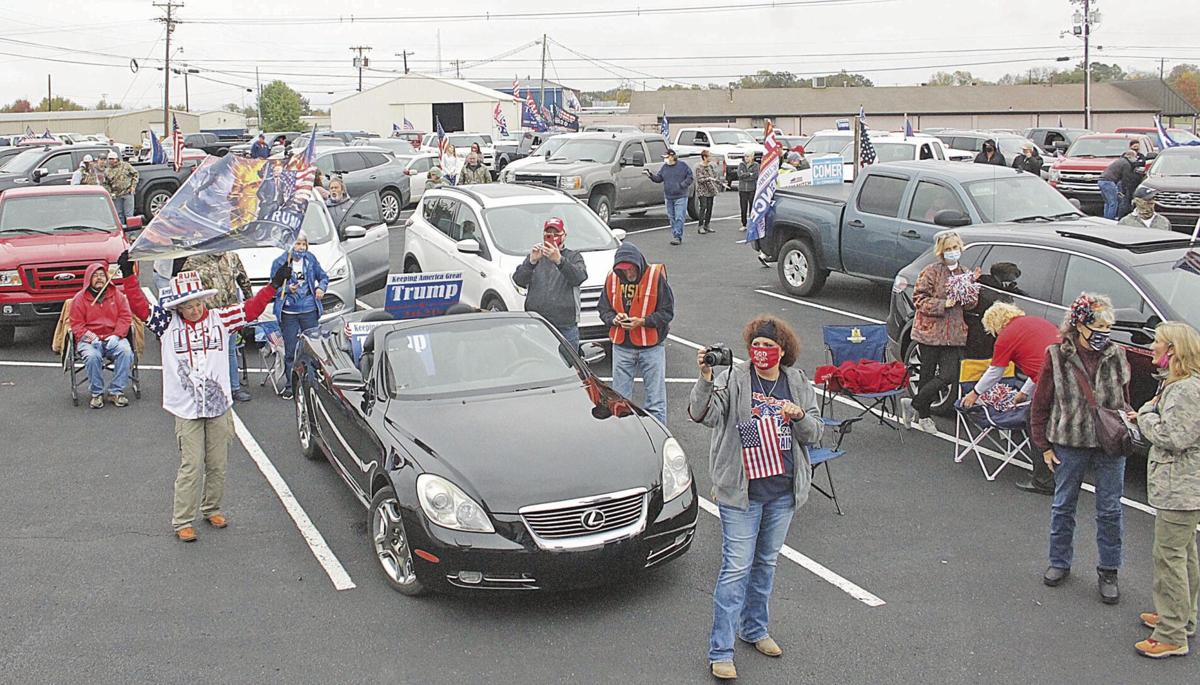 Republican Party supporters crowd the parking lot of the Cheri Theatres Saturday morning in Murray for the Tail Gate for Trump Rally.

Some of the more than 125 vehicles involved in Saturday's Trump Tail Gate Rally depart the Cheri Theatres parking lot in Murray.

Republican Party supporters crowd the parking lot of the Cheri Theatres Saturday morning in Murray for the Tail Gate for Trump Rally.

Some of the more than 125 vehicles involved in Saturday's Trump Tail Gate Rally depart the Cheri Theatres parking lot in Murray.

The event —billed as Tail Gate for Trump — saw supporters brandishing sings, decorating their vehicles and honking their horns as they readied their forces for the home stretch of the 2020 general election. Trump is seen as trailing in most national polls against his opponent, former Vice President Joe Biden. They believe history will repeat itself, with Trump bucking the polls as he did in 2016 when he defeated former Secretary of State Hillary Clinton in claiming the White House.

“I believe we’re about to show Murray, Kentucky that we’re on the right side of history,” said Kentucky 1st District Congressman James Comer (R - Tompkinsville), who is heavily favored in his bid for re-election against Democrat James Rhodes of McCracken County, who is involved in his first bid for a federal office.

“You guys are like me and you’ve been watching television and you’ve been watching all of the big news stations talk about the doom and gloom for the Republican Party and that the presidential race is already over, but I tell people all of the time that the polling is based on what’s happened in past elections and, in the past five or six (presidential) elections, the turnout has been about 50%.

“Well, an amazing thing is happening this year, not just in Kentucky, but in all 50 states. The turnout is going to be abut 65 %, but what pollsters and all of these smart analysts on TV that know everything about politics don’t know is who are those extra 20%? I think the president is right when he says that those 20% are Americans that are fed up with the Democrats and their socialist policies and tax-and-spend philosophy.”

Comer also took aim on Kentucky Gov. Andy Beshear, who he called a “socialist governor that shut our economy in Frankfort and needs to get the message that rural Kentucky is fed up with Democratic socialist policies that we’re seeing in Washington and seeing in Frankfort.”

Kentucky U.S. Sen. Mitch McConnell (R - Louisville) was not in Murray Saturday, but he was also heavily on the minds of those in attendance, a crowd that consisted of more than 125 vehicles that spilled into the adjoining Big Apple Cafe parking lot. McConnell, the Senate’s majority leader, is locked in a battle with Democrat Amy McGrath, a retired Marine Corps lieutenant colonel and fighter pilot, while he remains in Washington overseeing the confirmation hearings of Judge Amy Coney Barrett to the United States Supreme Court. This is a major issue for both Republicans who are in favor of her confirmation and Democrats who believe any confirmation should wait until after the election.

Clearly, the Republicans at the Murray rally are behind McConnell.

“He is one of the great leaders of our nation,” said Calloway County Judge-Executive Kenny Imes, who spoke on McConnell’s behalf. “If you stop and think about it, there are four leaders that we have to depend on in our country (in Congress) and Mitch McConnell is the only one from the heartland of the U.S. The other three are from California and New York. My point is that’s the thing that keeps us together and keeps us on the right track.

“I think one of the greatest accomplishments he has had as majority leader is to get the confirmation of two Supreme Court justices and, on Monday, he’ll get a third and that is in just the last 3 1/2 years. On top of that, he has gotten confirmation for more than 300 federal judges in the lower courts and I think it’s important that we understand how important it is to have a Supreme Court that actually listens and doesn’t go off on some tangent as it’s been prone to do. And you do know, the other side has already been talking about packing the court.”

Several other GOP candidates spoke Saturday, then all of the vehicles departed the area for a cruise around the city’s courthouse square.

McGrath was in Murray last week to speak with supporters and was back in the area Saturday with a visit to Kenlake State Resort Park in Aurora. While in Murray last week, McGrath hammered her six-term opponent for insisting that the hearings go forward during the COVID-19 pandemic.

“It’s unconscionable, unless you’re a man who is all about your own power and your own party,” McGrath said last week during at a rally at Chestnut Park. “My husband is still Republican, but one thing we believe is that we’ve got to have leaders that always put their country ahead of themselves. We were both in the military for 24 years and we have always put this country ahead of political parties.

“I don’t believe this is a man who puts our country ahead of his own agenda. How on Earth can you continue ramming through a Supreme Court nominee when you should be focusing on saving our country, especially when you have the power to do so?!”