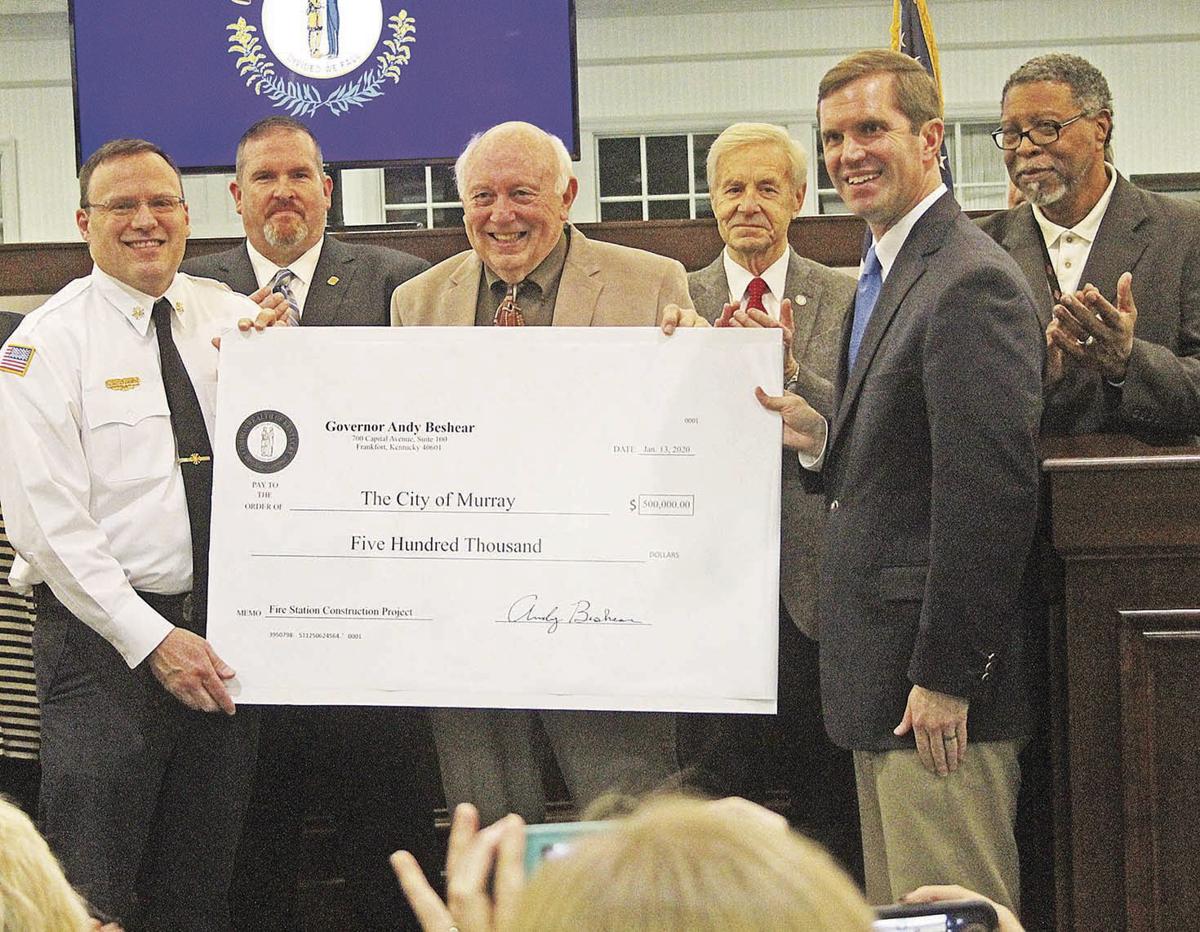 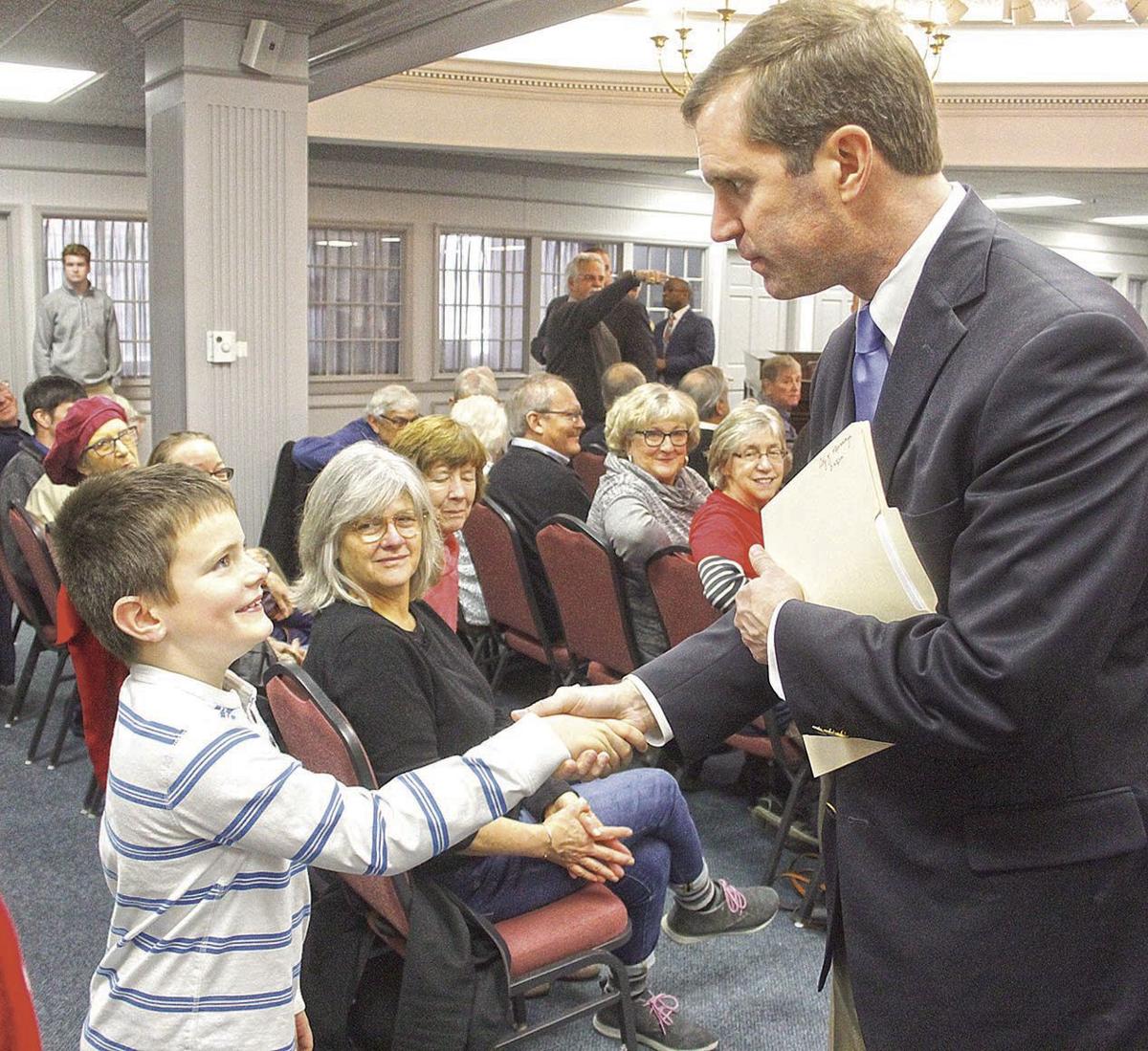 Kentucky Gov. Andy Beshear, right, greets Henry Mallory, 7, of Murray, Monday afternoon at City Hall in Murray. In Beshear's first major venture outside of the Frankfort area, he was able to meet with Mallory, the author of a letter Beshear said he read the day after he was elected that he said inspired him. 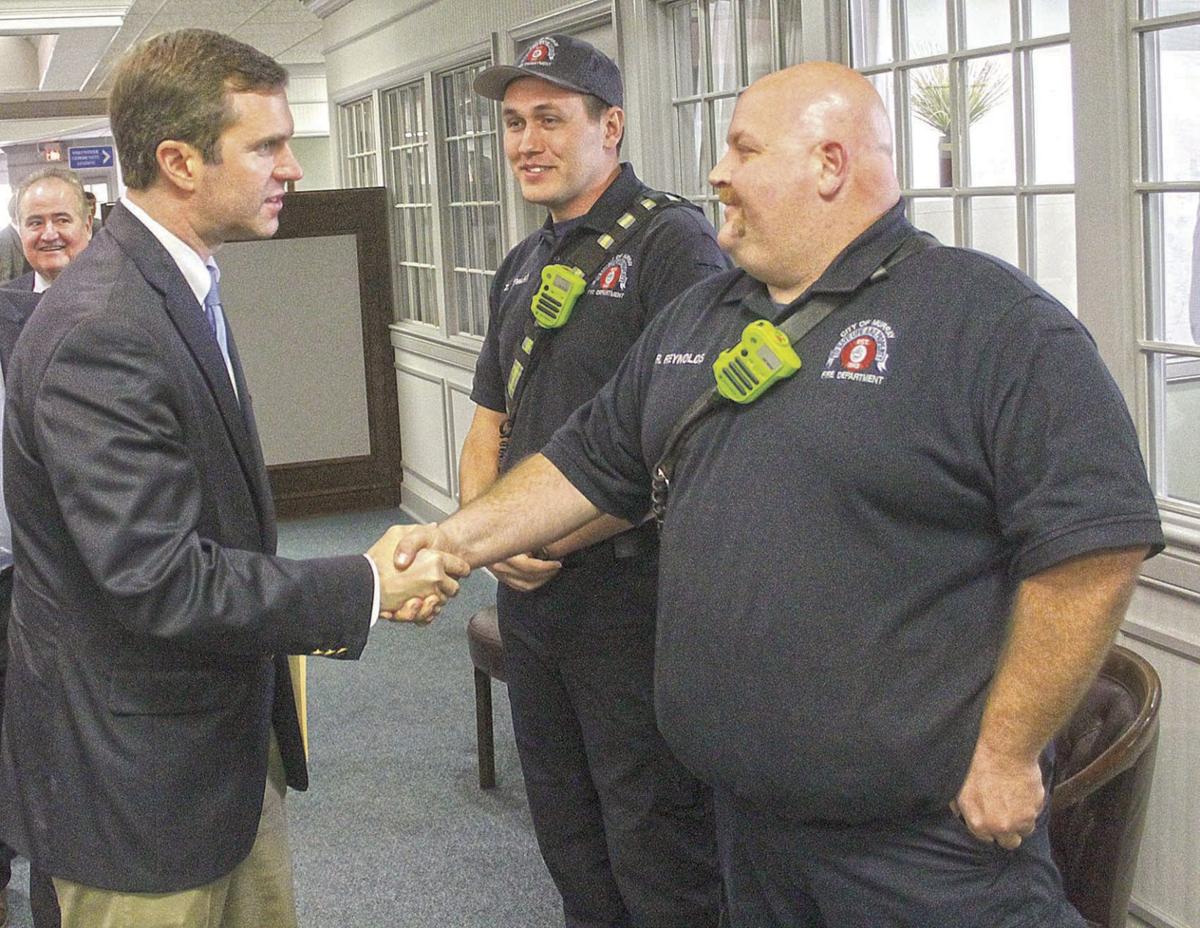 Kentucky Gov. Andy Beshear, right, greets Henry Mallory, 7, of Murray, Monday afternoon at City Hall in Murray. In Beshear's first major venture outside of the Frankfort area, he was able to meet with Mallory, the author of a letter Beshear said he read the day after he was elected that he said inspired him.

MURRAY — With western Kentucky deeply in the roots of his family tree, new Kentucky Gov. Andy Beshear said he wanted that area to have a big place in his first travel long-distance day since his inauguration in December.

Monday, Beshear, son of former two-term Gov. Steve Beshear, made that anticipated journey, stopping in four communities to announce that large-dollar assistance was coming to important projects. Murray had a place in those plans and, when the afternoon came, the governor was standing inside City Hall announcing that the city was being presented $500,000 from a Community Development Block Grant that will go toward the construction of a new fire station.

“I am so excited to be here in western Kentucky and right here in Murray,” Beshear said before discussing why Murray was on his travel itinerary Monday. “This new station is going to replace two outdated stations which are not large enough for all of the necessary equipment. The new station will allow our firefighters to respond to emergencies faster and make Murray safer for its residents. This investment, everybody’s investment, is going to help save lives, is going to help save property and maybe will be the difference between saving those memories that are inside each and every one of our homes and businesses.”

Though this was a City of Murray matter, the audience that came for the announcement included numerous other officials from the community. Nearly every elected officer from Calloway County’s government was in attendance, along with several state officials, including Murray’s own John McConnell, whom Andy recently appointed executive director of the Kentucky Office of Boards and Commissions.

It went further than that, though. In the crowd were both Democrats and Republicans, a fact the Democrat did not fail to notice.

“It is wonderful for all of us to be here today,” he said. “We have been talking a whole lot since the inauguration about what I call TEAM Kentucky, and it’s about all of us being able to find common ground and do the right thing. It is about the fact that we live in a state with so many pressing needs that aren’t partisan and ideological at all, and we have an opportunity right here and right now to do so much together to address critical needs today.

“We’re not doing a Republican or Democrat thing today. We’re going a good thing and we’re doing it together.”

Other stops included Cadiz, Paducah and Dawson Springs, where Steve grew up.

Andy said the new station would replace two stations that are both quite old and have been showing wear and tear now for several years. The state of those stations has been the subject of some heated discussions among members of the Murray City Council, with some of those members calling their condition “embarrassing.”

“It’s badly needed,” said City of Murray Fire Chief Eric Pologruto on Monday. “This is a wonderful opportunity to be able to get these funds and to get a fire station to serve our citizens and house our firefighters, and with the economic climate the way it is, with funds getting tighter and tighter, to have this kind of opportunity come along, you don’t find it all of the time anymore. That’s what makes it more exciting.”

Monday’s activities were particularly satisfying for former City of Murray Director of Planning Jeremy Buchanan, who had a major part in writing the grant that led to the governor’s announcement, along with City Administrator Jim Osborne. Now the executive director of the Purchase Area Development District, Buchanan returned to his old haunt to see the fruits of labor revealed.

“I think this is an exciting day for Murray,” he said. “I’m proud to be part of it.”

“On behalf of the citizens of Murray, we proudly accept this check and promise you we’ll use it wisely,” City of Murray Mayor Bob Rogers told Andy after a brief photo opportunity with the large ceremonial check. He then shifted attention to Andy’s father. “You came over from Cadiz today, didn’t you? And you drove over a couple of bridges that perhaps your dad had something to do with (newer, more modernized versions that cross Lake Barkley and Kentucky Lake east of Murray).

“Many of us never thought we’d live to see those bridges. But they’re there and they’re great and we think you’ll do the same thing.”

“CDBG funds enable local communities, like Murray, to implement essential facilities that improve safety and security,” Humphries said. “Adding a new fire station to our community provides a safer environment for our citizens. I am pleased to see these funds being invested for Murray’s first responders.”

“Our first responders and firefighters go out in our community every day and bravely serve those in need,” Elkins said. “I am glad that this grant will allow for the construction of a new fire station that will help them fulfill their duties and serve our area to the best of their abilities.”

The grant is overseen by the U.S. Department of Housing and Urban Development.