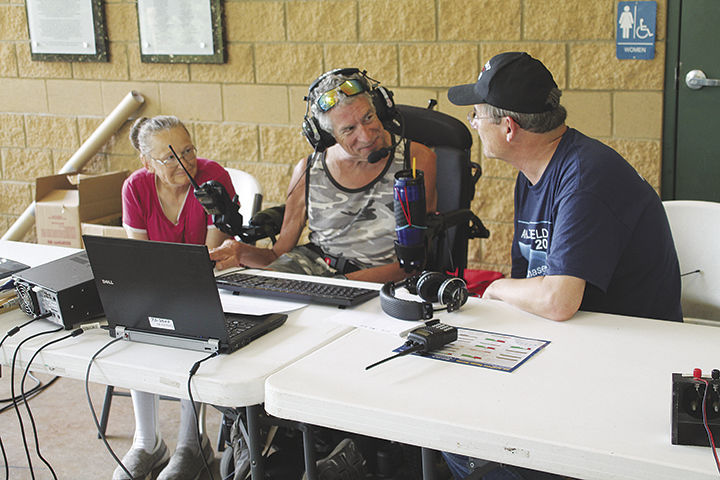 Bonnie Allen sits with her boyfriend, Robin Jones, center, a member of the Murray State Amateur Radio Club, and another member, Denis Barton, at one of the stations. 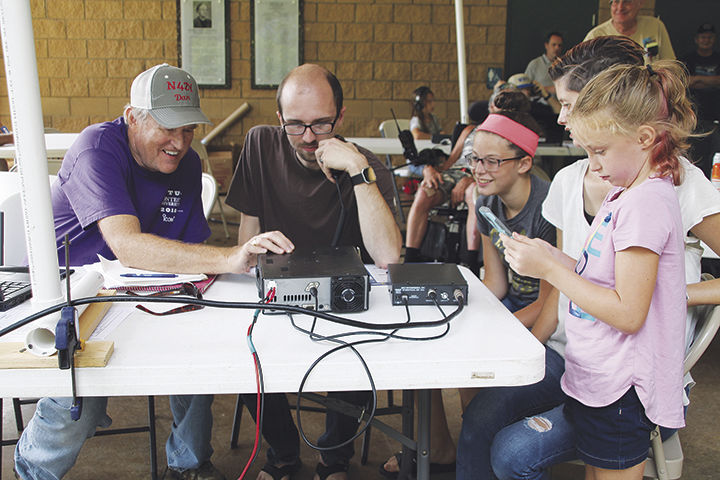 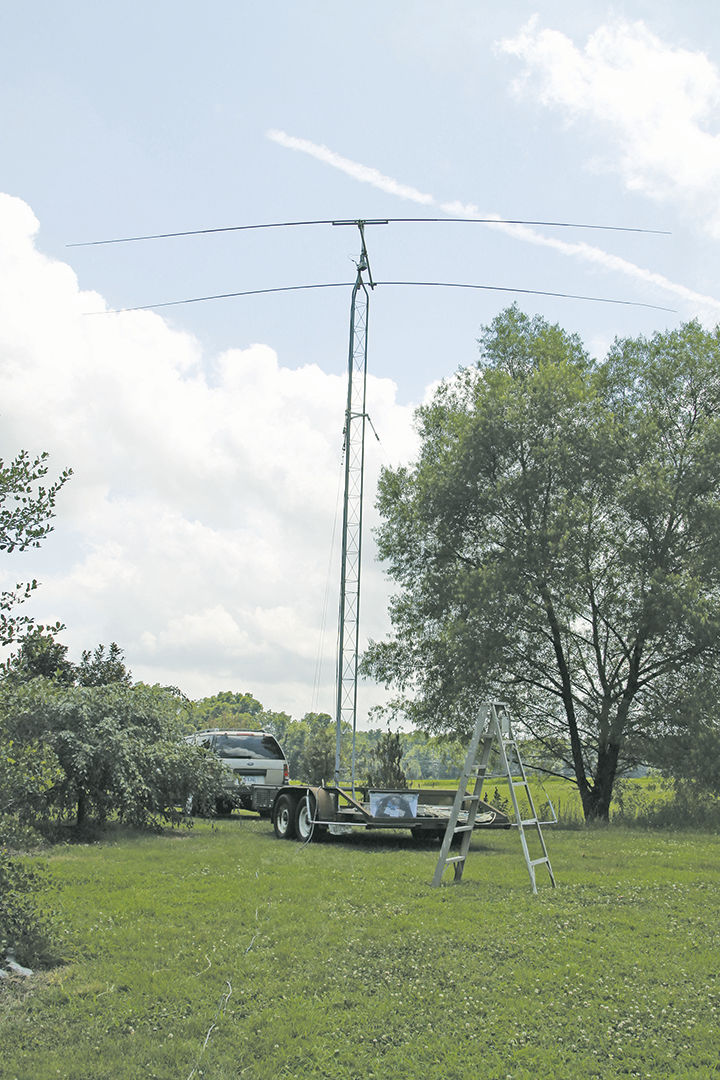 One of the antennae used at Saturday’s field day held by the Murray State Amateur Radio Club is pictured at the arboretum.

Bonnie Allen sits with her boyfriend, Robin Jones, center, a member of the Murray State Amateur Radio Club, and another member, Denis Barton, at one of the stations.

One of the antennae used at Saturday’s field day held by the Murray State Amateur Radio Club is pictured at the arboretum.

To the layperson, ham radio might seem like just another hobby. To those in the know, it is a lifeline.

The Murray State Amateur Radio Club participated Saturday in the annual ARRL (American Radio Relay League) Field Day at the university’s arboretum. During field days, clubs across the country test out their operating systems and skills to see how many contacts they can make before the end of the day. They also use the opportunity to educate the general public about the importance of ham radios.

Mike Lyons, president of the local club, said the club came in third out of more than 100 clubs across Kentucky last year in terms of the number of points they reached. The club reached 48 states last year, only excluding Rhode Island and Montana, he said. This year, the club reached most of the U.S. and some Canadian provinces as well. The only unreached states were Wyoming, Hawaii and Alaska.

“We were also able to contact Puerto Rico and the U.S. Virgin Islands, along with some other countries,” said club member Josh Kerr on Sunday. “A few that I recall are France, Guatemala and Chile.

“I’m proud to report we had another successful year. We completed a total of 761 contacts with amateur radio operators around the world this year during the 24-hour exercise. Our final ‘score’ was 3,430 points, which is just slightly higher than our score last year of 3,032.”

Bill Call, who is the director of Calloway County Emergency Management, said the Murray State club has been around since 1960. He first became acquainted with it in 1964 when he was attending summer school at Murray State, and he has been a full member since 1965. Membership has fluctuated over the years — with the lowest number of members being about three one time — but the club is quite strong now and boasts 65 members currently, Call said.

Lyons said the club begin getting a lot more attention from people interested in joining after the ice storm that hit western Kentucky hard in January 2009. Call said that because of Murray State’s generators and strong fiber optics system, long distance phone service was still available on campus during the ice storm for emergencies. However, with electricity out and many cell phone towers not working in the region, most communities were not so lucky.

“Most of the other counties in western Kentucky lost all forms of long distance communication except for ham radio,” Call said. “So ever since then, Kentucky Emergency Management has really encouraged emergency operations centers and emergency managers to involved in ham radio for the backup communications it can provide.”

Call leads the Community Emergency Response Team (CERT) trainings in Calloway County, and he said he has recruited a lot of amateur radio club members by encouraging CERT trainees to become ham operators.

Lyons and his wife, Marie, are heavily involved in the Western Kentucky Chapter of the American Red Cross, and they have gone on many trips to help out with disasters in various parts of the country. He said his involvement in the Red Cross overlaps with his interest in ham radio because Red Cross has been relying on ham radio operators in many of the most recent natural disasters.

Dan Reimer said he and his wife bought a house in Murray in 2013 and moved here in 2016 after his retirement. Even before he moved to the community, he did some online research and found the Murray State club and contacted Call to make sure the community had an active ham radio presence. Reimer said he has been members of different ham radio clubs in four or five different states over the last 44 years, but the Murray club is one of the best.

“This is one of the best I’ve ever seen,” Reimer said. “They are very dedicated and very interested in helping the community. They offer classes, sometimes twice a year. We’re very free about sharing the hobby and our love for the hobby.

“Ham radio is probably the most diverse hobby that you’re ever going to find. There is literally something for everybody, and no two people go at it the same way. Some people just like to talk and they get on the air and all they do is talk, and they’ve got friends all over the country and sometimes all over the world.

“Some people like contests like what we’re doing today. Some people like just the technical areas and they almost never get on the air, but they build things. There are discoveries that have been made and are being made in this hobby just by amateurs like the people you see here today. … A lot of people think it’s an outdated thing, but it’s not at all. It’s very state-of-the-art.”

Reimer was helping Jacob Williams get on the air at his station on Saturday. Jacob’s wife, Jessi Williams, said she brought her husband to the event as a surprise because his late grandfather Larry Williams was a ham radio operator himself. Jacob said his grandfather, who was a Paducah resident, had the tallest CB tower in western Kentucky and the largest collection of radio tubes in the area as well. Jacob said he enjoyed the field day and learned some interesting things.

The Murray State Amateur Radio Club has held the event at several locations in the past, including Murray-Calloway County Central Park, the IT building on Murray State’s campus and Murray Middle School.

Call said the arboretum has been a very good location because it attracts members of the general public who happen to be wandering by. He said attendance has been low in some years in the past, but has been very good over the last several field days.

Richard Palmer, the public relations director for the club, said the field day is very important in showing how prepared the community is.

“It just shows the capability that Calloway County and the city of Murray has if there is a catastrophic event,” Palmer said.