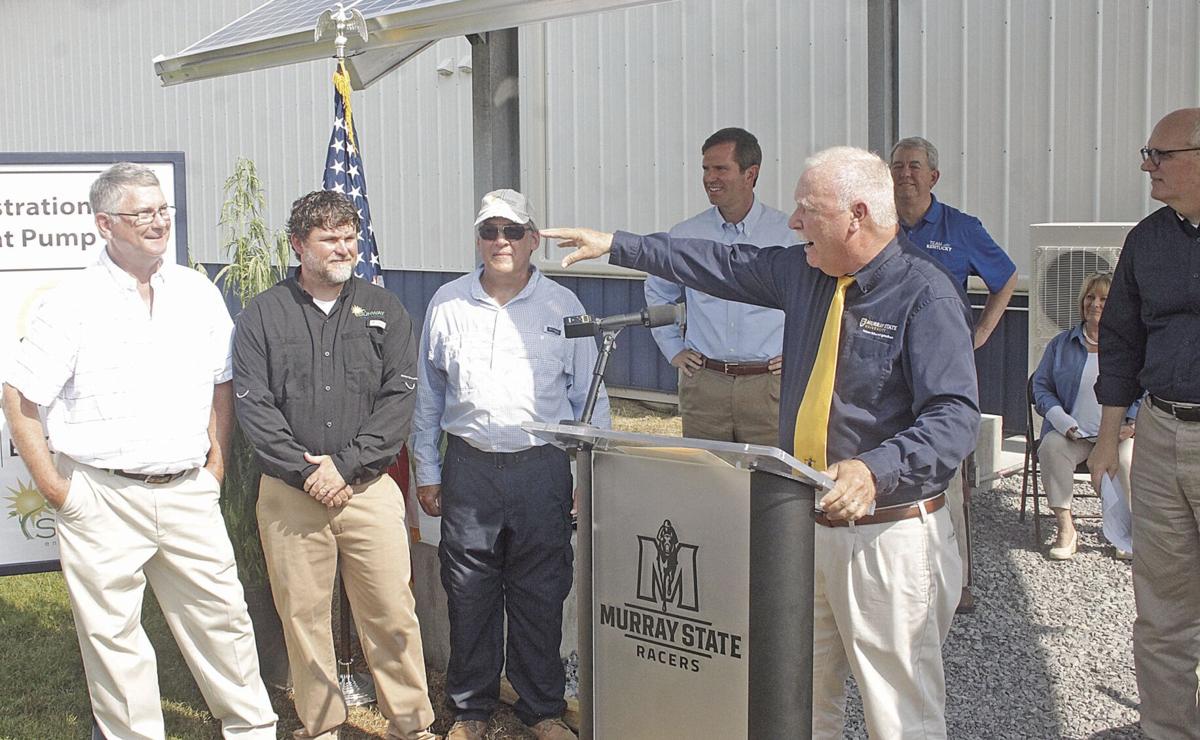 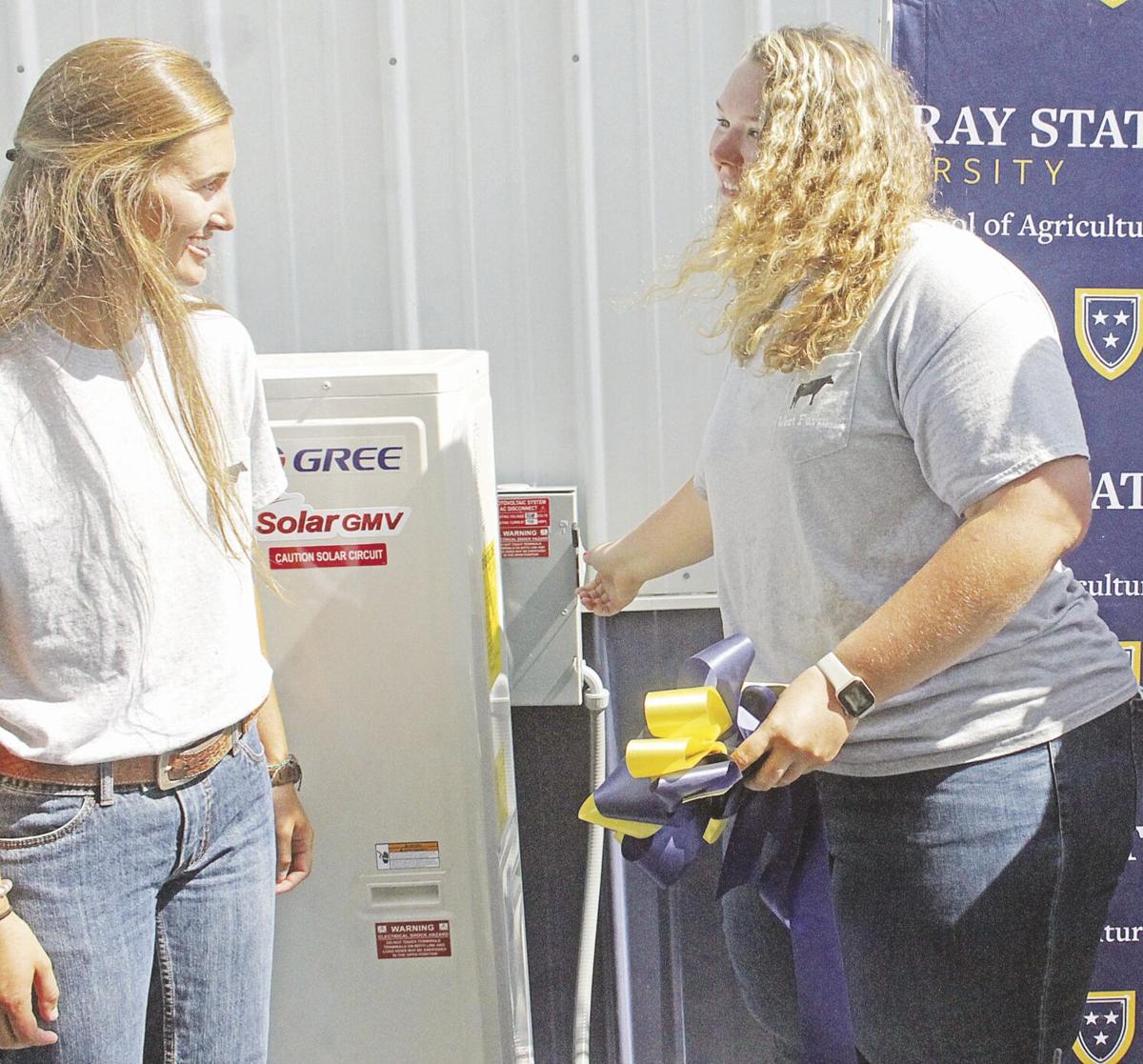 Murray State University student Savannah Austin, left, watches fellow student Maria Turner flip the switch to officially activate a solar energy assist heat pump Friday morning for the farm shop on the West Farm of the campus. This came after Kentucky Gov. Andy Beshear turned down an invitation to handle the ceremonial moment himself, instead asking that a student be given that honor.

Murray State University student Savannah Austin, left, watches fellow student Maria Turner flip the switch to officially activate a solar energy assist heat pump Friday morning for the farm shop on the West Farm of the campus. This came after Kentucky Gov. Andy Beshear turned down an invitation to handle the ceremonial moment himself, instead asking that a student be given that honor.

MURRAY — One of the key terms being spoken these days at Murray State University is “partnerships.”

This has been something strongly emphasized, so far, during the tenure of Murray State President Dr. Bob Jackson, and it has led to several important projects on the campus. Friday, the Murray-Calloway County community saw the latest example of how bringing multiple sides together has benefited Murray State, this time, in the form of a cutting-edge tool for the Hutson School of Agriculture.

It is advertised as a solar energy assist heat pump and it began providing needed cooling and heating for one of the Hutson School’s most important facilities, its main shop the West Farm, where the agriculture equipment that is used in so many aspects of its research work resides.

“What a great day for Murray State agriculture!” said Hutson School Dean Dr. Tony Brannon to a large audience assembled outside the shop. That audience included, among others, Kentucky Gov. Andy Beshear, who was continuing a swing through his native western Kentucky.

In his comments, Beshear talked of how Kentucky is in position to become a national power in agriculture-related pursuits.

“And what we see is Murray State stepping up and wanting to be part of that future,” he said. “This is the future embracing technology so that we can do what we have done traditionally even better than ever before and it’s going to make this area a leader. The investment that you’re making today is the technology that you can show any company that comes here and says what could be, and is something that is going to pay great dividends for years to come.”

This is only the latest dive into technology for the Hutson School. Brannon noted that a bioburner, using animal waste as its main energy source, was installed at the Hutson School’s Equine Center several years ago, providing more comfortable conditions for the university’s award-winning equestrian riders and their horses. One of its current experiments is a drone that can be used to spray fields in an attempt to prevent insects and disease from hampering crop production.

For the farm shop project, it was the efforts of several sources forming into one team that made this possible. One of the main cogs in the partnership was Henderson County farmer Robbie Williams, who was a student at one time at Murray State. Brannon said Williams and Murray State alum Todd Powell, who is with Sunway Energy Solutions, which is based in Murray, approached the Hutson School about the solar heat pump.

“This has been a cooperation. I have been the ‘co,’ this is the ‘operation,’” Brannon proclaimed as he asked officials from the participating partners to come to the podium and accept Hutson School gifts for their part in making the project happen. He focused on Williams and Powell.

“When we were approached by Murray State ag alumnus Todd Powell and farmer, entrepreneur and former Murray State student Robbie Williams about the possibility of a solar-powered heating and cooling system, we were energized ... no pun intended,” Brannon said, noting how solar projects had been explored over the years, only to fade. “Todd and Robbie were persistent to follow through with this project and we were able to identify this university shop that’s divided into one section for agriculture systems technology and an educational laboratory and the other side that’s our farm maintenance shop as the ideal place for this project.”

Williams said it was easy to target Murray State for this idea.

“Murray State just gets things done. There’s less bureaucracy,” he said, adding that he travels to numerous heating and air conditioning shows throughout the country. Then, he met representatives from Gree. “We got connected and the idea started flying around and they said, ‘Hey! Let’s do a solar project together in Kentucky,’ and I thought that there’s not a better place to do it than Murray State University. They gave us a clean slate and opened the door and we got it done.”

While the crowd for Friday’s ceremony was dotted with local and state elected officials, as well as numerous business officials and Murray State alums, there also was a strong representation from current Hutson School students, several of whom were given starring roles for the program.

This included Ellie McGowan of Princeton, who joined fellow students Mallory White and Maddie Clements, both of Union County, in giving testimonials of what the Hutson School has done for them and others. McGowan then addressed the main issue of the day.

“I know that myself, along with Maddie and Mallory and the various ag students who join us from this area and this university, are so excited and thankful for this innovative and modern investment into ag tech here at Murray State, and the new and exciting opportunities that will be brought forth because of it,” McGowan said. ”We, as an entire student body, would like to thank all of those who made this mission a reality for this university and for our students. The establishment of this sustainability hub and its success to its students is something that will not only benefit Murray State’s ag students, but will also benefit our campus as a whole. Investments like these truly exemplify the Hutson School’s widely-used motto of ‘getting an education rather than just a degree.’

“We cannot thank you enough for investing in our students and our university.”

“Universities in this commonwealth have a tremendous responsibility to make sure that we are doing this work and that we are on the cutting edge pf these types of projects,” Jackson said. “It takes legislators ... it takes other elected officials ... it takes governors to make these things a reality.”

The final act of the program was originally reserved for Beshear, the ceremonial flipping of the switch to activate the system. Without hesitation, Beshear made a suggestion.

“Can we have one of the students come up?” the governor asked.

In stepped ag student Maria Turner to take care of that duty. Her action was met with the applause of the audience.