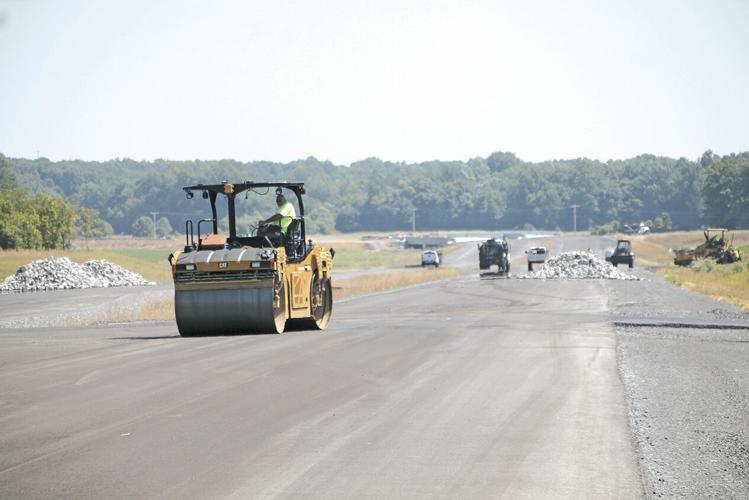 Construction equipment is seen Thursday on the main line of the new U.S. 641 corridor south of the Clarks River. Jim Smith Contracting plans to start paving along the main line next week, and people are warned to watch for trucks hauling asphalt on nearby roads. Area residents are reminded that it is illegal to drive through this construction corridor. 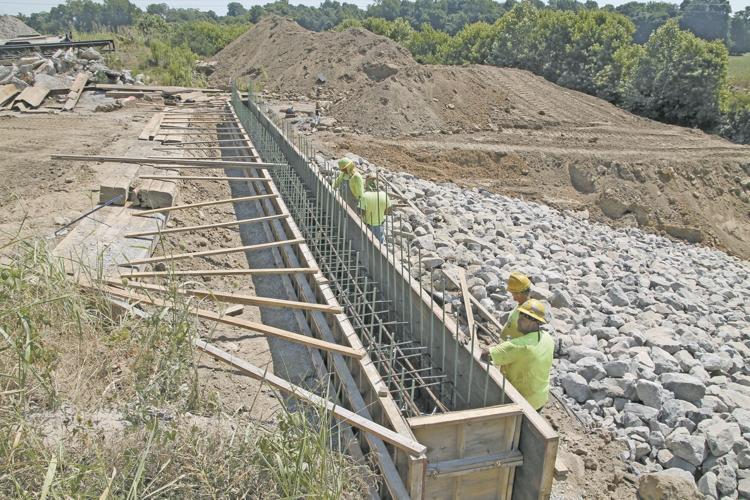 Contractors are seen working Thursday at one of the new bridges being constructed over the Clarks River south of Murray.

Construction equipment is seen Thursday on the main line of the new U.S. 641 corridor south of the Clarks River. Jim Smith Contracting plans to start paving along the main line next week, and people are warned to watch for trucks hauling asphalt on nearby roads. Area residents are reminded that it is illegal to drive through this construction corridor.

Contractors are seen working Thursday at one of the new bridges being constructed over the Clarks River south of Murray.

MURRAY – The project to widen U.S. 641 South into a four-lane highway from Murray to the Tennessee state line is ahead of schedule and slated to be completed next summer, a Kentucky Transportation Cabinet spokesman said Thursday.

Jim Smith Contracting of Grand Rivers is the prime contractor for the project, which was jump-started in December 2018 with a $23 million federal BUILD (Better Using Investments to Leverage Development) grant awarded to the Calloway County Fiscal Court, KYTC said. The total contract is for $37.6 million, and when completed, there will be a new section of U.S. 641 from Murray to Hazel and the Kentucky-Tennessee line. The existing two-lane highway carries about 6,000 vehicles per day, and KYTC said that in addition to improving safety for daily commuters, the new highway is expected to improve economic development opportunities by connecting Murray and Calloway County to Paris, Tennessee, and to Interstate 40 on to the south.

The first mile south of Murray – which was Phase 1 of the overall project – was completed last year, leaving another 5.6 miles to the state line, said KYTC District 1 Public Information Officer Keith Todd. He said the target completion date is sometime in the summer of 2023, and Phase 2 is about 50% complete and ahead of schedule.

“The weather has been pretty good,” Todd said. “Of course, we had some wet weather back early in the year, but we had some mild weather back in December, so (workers) were able to run later last year. That has helped, and then our contractor has been pretty dedicated to getting that done, so any time during the winter when there was a week or two of good weather where they could work, they would get down there.”

Todd said the first plan for the project was for KYTC to construct about a half a mile into Tennessee, but after the Tennessee Department of Transportation (TDOT) got further into the planning process, an agreement was reached for Kentucky’s plans to end at the state line. At TDOT’s request, some changes will be made at the connecting point for KY 893/State Line Road at Hazel, so Todd said grade and drain adjustments will likely be starting sometime in the next week.

“It’s just some minor elevation changes, so it will just require some grade and drain work,” Todd said. “It will change the elevation of the connecting point there at State Line Road. I don’t think that work will take more than maybe a week or two to finish.”

Todd said Jim Smith Contracting plans to start paving along the main line of the new corridor south of the Clarks River around the middle of or late next week. Motorists are asked to exercise caution and be alert for trucks hauling asphalt to the paving operation on roads connecting to the corridor. Area residents are reminded that it is illegal to drive through this construction corridor.

To enhance safety, Todd said the corridor will include four RCUT (Restricted Crossing U-Turn) intersections. KYTC says an RCUT intersection is characterized by the prohibition of left-turn and through movements from side street approaches as permitted in conventional designs, instead requiring drivers to turn right onto the main road and then make a U-turn maneuver at a one-way median. Todd said the new RCUT intersections are being constructed at Tom Taylor Trail, KY 1828/Midway Road, Phillips Drive and where the existing U.S. 641 connects to the new roadway just south of Murray.

“Based on our experience with some of the other four-lanes – like the RCUT that we built there at Hardin in Marshall County – these really improve safety,” Todd said. “I think a couple of these were already planned and then they went ahead and added them in so that all four of those intersections will be getting an RCUT.”

In other news, Todd said Murray and Calloway County have several smaller highway projects that are expected to ramp up in the coming weeks, including an RCUT to enhance safety at the entrance of the new Paschall Truck Lines facility on U.S. 641 North. Construction is expected to start in mid-July and take less than a month to complete, Todd said.

“The traffic signal at Max Hurt Road will stay; this is just at the entrance to the new PTL facility,” Todd said. “They will have their own entrance and exit, and it will have an RCUT because of the proximity to those traffic signals through there.”

Todd said a KYTC contractor will also be adding concrete pavement at the U.S. 641-Business intersection at North Fourth and Chestnut streets. He said work is expected to start in the next few weeks, and KYTC will provide a work zone notice when a start date is set.

“That intersection gets a lot of heavy truck traffic, so there’s been some waffling of the pavement there,” Todd said. “By putting concrete in there, then that problem with the rough spots in the pavement goes away in the regular asphalt.”