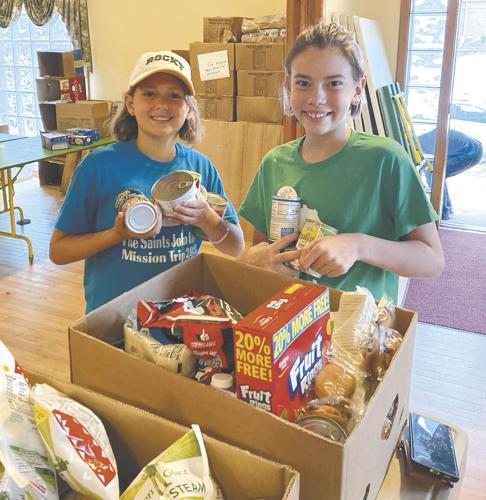 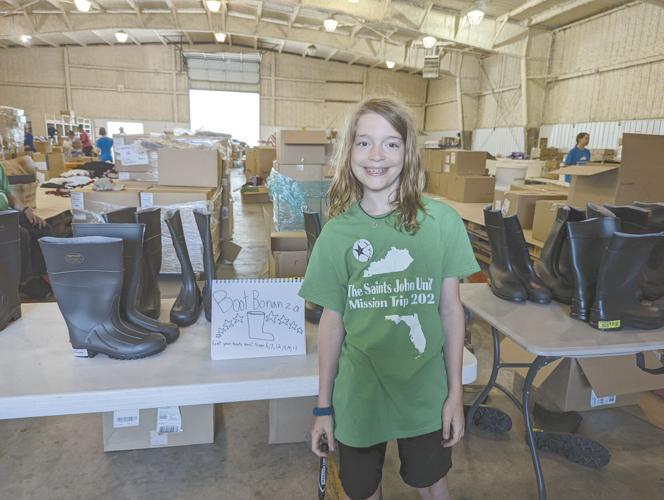 Liam Williams helps out at the Mayfield Strong Distribution Center.

Liam Williams helps out at the Mayfield Strong Distribution Center.

MURRAY – Six months after the tornado that destroyed much of Mayfield, groups from around the country are still helping the community recover. Recently, the youth with a Murray church teamed up with another church from Florida to continue those efforts.

Angie Mills, youth leader and volunteer for St. John’s Episcopal Church in Murray, said the church received a call several months ago from St. John Devine Episcopal Church in Sun City Center, Florida. The person wanted to know if the Murray church’s youth wanted to team up with theirs to work on some projects in Mayfield and other surrounding areas that were affected.

“They drove up here and brought five youth from their church, and then we had approximately 10 from our church here in Murray to join them for the week,” she said. “The first day, we went to the Ken-Tenn Foodbank in Fulton and did inventory and cleaning for them. And then on Tuesday, Wednesday and Thursday, we volunteered for Mayfield Strong. There was one day in the distribution center, and the other two days at separate sites helping clear debris from people’s homes that have been destroyed or damaged in the tornado.”

Thomas Kreidler, director of Christian education at St. John Devine, said he was hired for his position in November, and he began discussing the possibility of a mission trip with church leaders in January.

“One of the things that I firmly believe is that mission starts in your backyard, and so we don’t have to go to another country,” Kreidler said. “To be quite honest, I just feel like the Holy Spirit was speaking and said that with the tragedy that occurred Dec. 10, that we could probably do something to help the community in Mayfield. My Rector agreed, and I pitched it to the youth and they were all on board. They thought that was a great idea.”

At that point, the Florida church reached out to St. John’s in Murray to start planning the collaboration. They worked to raise $7,000 to pay for the trip, which he said will leave some for a donation as well.

“Once we’ve done some accounting and make sure we pay for everything, we’re going to send that to one of the organizations in Mayfield to use the money for continued efforts because so much still needs to be done,” Kreidler said.

Five youth and three adults came on the trip, with the youngest being 9 and the oldest 16. Although they had seen photos of the damage, they were amazed by how much work was left to do six months in.

“They were really struck that we live in a country as wealthy as America and there are people that are still living six months afterward in houses that have no electricity or running water,” Kreidler said. “They wanted to stay longer and help more. I was touched by their compassion, and we don’t always get a chance to see that in our youth. It was touching to me to see their hearts go out to the people in Mayfield.

Kreidler said he gives a lot of credit to his church’s youth for being committed to the trip and sacrificing the comforts of home to camp out for the week and help the community. The Murray youth really impressed him as well.

“They all worked their tails off,” he said. “I didn’t hear one complaint through the work. There were some kids that we actually had to force to take breaks. And the feedback from the volunteers about our kids made me feel good and proud of both the Kentucky and the Florida kids. It really was a joy to be a facilitator helping make it happen for them.”

“I know our church and the youth and I will not forget Mayfield,” Kreidler added. “They are in our hearts and in our prayers, and we will continue to do what we can from afar to support the community through prayer and anything else we can do to help.”

“We helped so many people and it was a really nice experience for all of us,” Carrie said. “We like to turn it into a game and come up with rewards, and that made it even more enjoyable, even in the heat. … We did inventory for the food bank and we helped them get ready for their upcoming inspection. And she was really grateful and we felt really happy that we were able to do that. With the site cleanup, we made a lot of progress, so construction crews can come in and start building up the houses again.”

Mills’ 15-year-old daughter, AnnaBelle, said she could only help for one day because of her summer job, but she felt good about what she was able to do at the food bank. She said she has only taken one year of Spanish in school, but it still came in handy.

“I’ve never really actually gotten to practice my Spanish, but almost every other person I talked to spoke Spanish,” AnnaBelle said. “I used so much Spanish and I helped so many people, and it just made me feel great.”