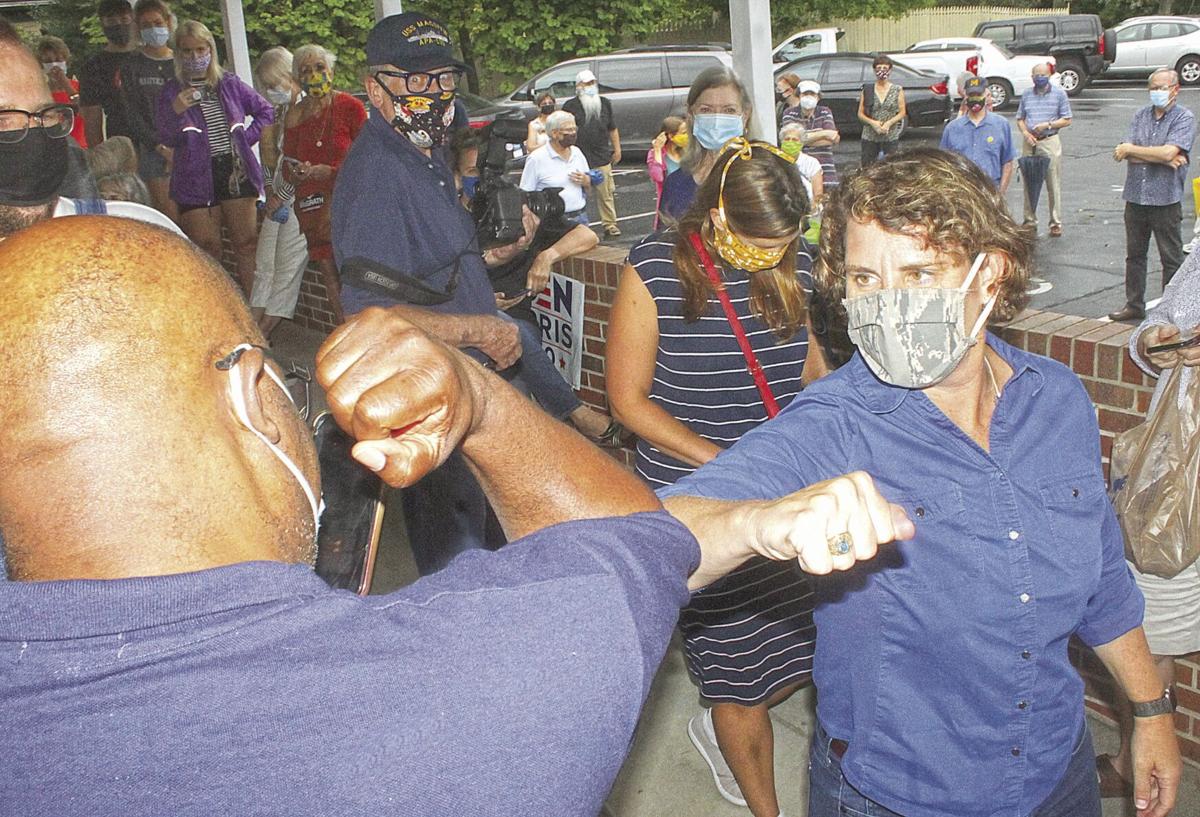 Democrat Amy McGrath exchanges an elbow bump with a supporter Saturday afternoon after arriving at the Calloway County Democratic Party headquarters at the Higgins House in Murray. 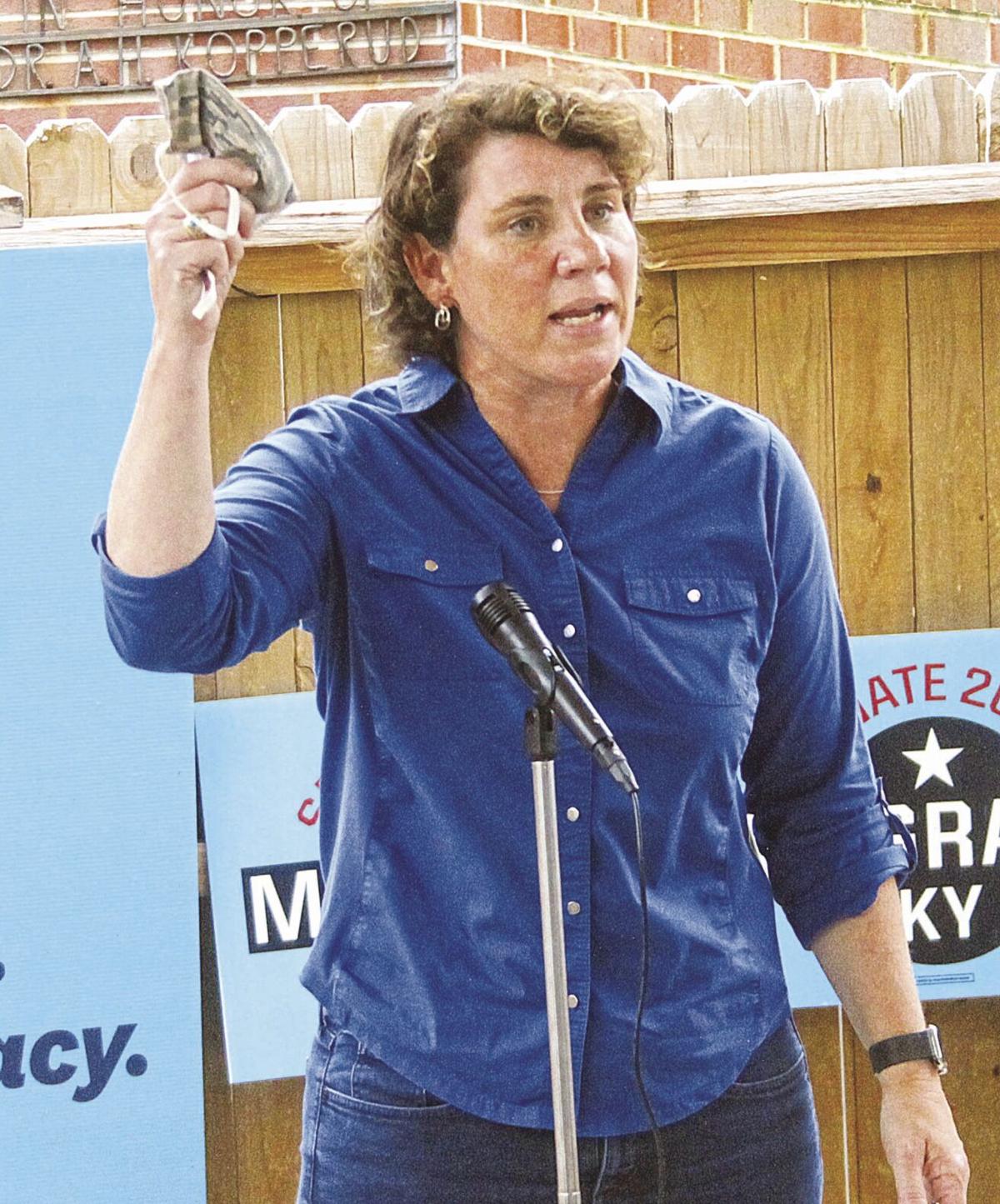 Kentucky U.S. Senate candidate Amy McGrath holds her face mask to the crowd Saturday as she speaks at the Higgins House in Murray. McGrath, a Democrat, is seeking to unseat six-term Republican Mitch McConnell.

Democrat Amy McGrath exchanges an elbow bump with a supporter Saturday afternoon after arriving at the Calloway County Democratic Party headquarters at the Higgins House in Murray.

Kentucky U.S. Senate candidate Amy McGrath holds her face mask to the crowd Saturday as she speaks at the Higgins House in Murray. McGrath, a Democrat, is seeking to unseat six-term Republican Mitch McConnell.

Retired United States Marines fighter pilot Amy McGrath told a crowd of about 80 supporters at the Higgins House that McConnell is more concerned about protecting  corporations than helping Kentuckians who are struggling to pay bills. In the afternoon rain at the party’s Calloway County headquarters, she said Kentucky was facing problems that she placed at McConnell’s feet even before the COVID-19 pandemic began taking hold in the Bluegrass State.

“He’s doing great. He’s getting richer and richer. How are you doing?” she asked the crowd, her question met with several negative responses. “We had the highest cancer rates in the country … the highest diabetes rate, heart disease. The highest! The top! And we have a senator who wants to continually throw people off of health care.

“We have some of the lowest wages in the country and we have a senator who has continually, for the last 30 years, tried to undermine unions and workers’ benefits and workers rights.”

Then McGrath moved back to the reason the crowd had to do what it could to follow a concept known as “social distancing,” the coronavirus, which has killed about 200,000 Americans. She displayed the face mask she brought with her, only taking it off as she spoke at a microphone at a safe distance from the nearest person.

Again, she took aim at her opponent, who is seeking his seventh term since defeating Democrat Walter Dee Huddleston in 1984.

“Two hundred thousand Americans have died on his watch,” McGrath railed, explaining that, in his role as majority leader of the Senate, McConnell has more access to intelligence briefing than any other member of Congress. She said he should have acted more decisively and should have been more urgent in telling President Donald Trump that the virus was a major threat to the U.S.

“He has failed! He tried to cut the funding for the CDC for the last decade and was successful in cutting the very portion that deals with pandemics. That was his bill to cut it. Seriously! Our senator failed to prepare us. You know when the first time was that he mentioned the coronavirus? I’ll tell you when. It wasn’t until the stock market crashed because that’s what he cares about. He doesn’t care about us. He doesn’t care about public health. He doesn’t care about national security.

“It was all about the pockets of the donors.”

McGrath also criticized the CARES package, the stimulus bill that McConnell is credited by many as having led in the spring. It consisted of $2 trillion. McGrath said a large chunk of it, though, benefited big business.

“He championed a $500 billion slush fund,” she said, continuing on the attack when it came to a possible second stimulus bill this fall. “When the House knows we need another bill like they passed in May, what does Mitch McConnell do? He goes away all summer. Then, at the end of the summer, he throws an unfavorable bill on the floor of the Senate, runs away, doesn’t even negotiate, then he comes back last week and throws an even more unfavorable bill, a teeny-tiny bill, runs away and says, ‘I quit.’ It’s the opposite of responsibility.

“Mitch .. you own this! Every time Mitch McConnell blames the other side, remind him ‘You own this, dude! You’re the guy in charge!’

“If it looks like I’m angry, it’s because I am. I can’t believe our leadership is this inept. I knew Mitch McConnell didn’t care, but I thought he was competent. I’m amazed at how poorly he’s done.”

In turn, McGrath offered a five-point plan that she said would address bringing economic aid to Kentucky, repair its health care system, trim the wage gap between what heads of companies make compared to their workers, and advocate for term limits for members of Congress.

In addressing this, she noted the accomplishments of former President Franklin Delano Roosevelt, a Democrat from New York who advocated for electricity to come to rural America and President Dwight Eisenhower, a Republican who was a hero of World War II and is credited with modernizing America’s highway system.

“They didn’t wait to see if it was profitable,” she said, charging that the private sector will not take a chance on something like broadband because of how they believe it will affect bottom lines.

McGrath’s comments were given during what was billed as a voter registration drive Saturday, where she encouraged her audience to become more active as far as passing the word about her campaign to others. Calloway County Democratic Party Chairman David Ramey seemed to echo this idea.

“Look, talk’s cheap. I’m talking to people who say, ‘Ah I can’t stand McConnell.’ I ask them, ‘Well, are you voting?’ They say no. We’ve got to change that, got to keep at it,” Ramey said.