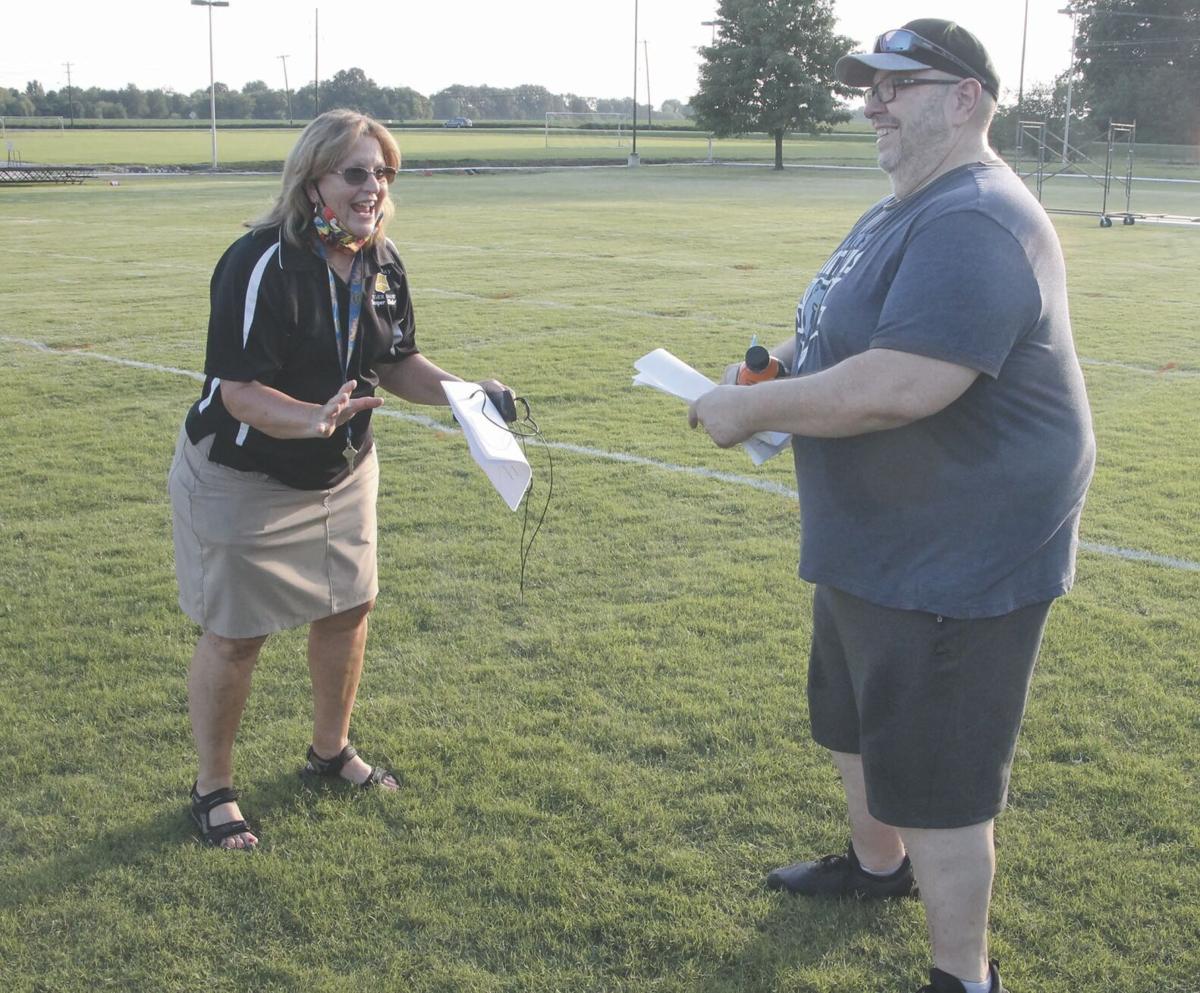 Murray Middle School band director Beth Stribling describes to Neal Bradley how excited her students were to hear he would be announcing their names at the Sixth Grade Band Kickoff Monday. 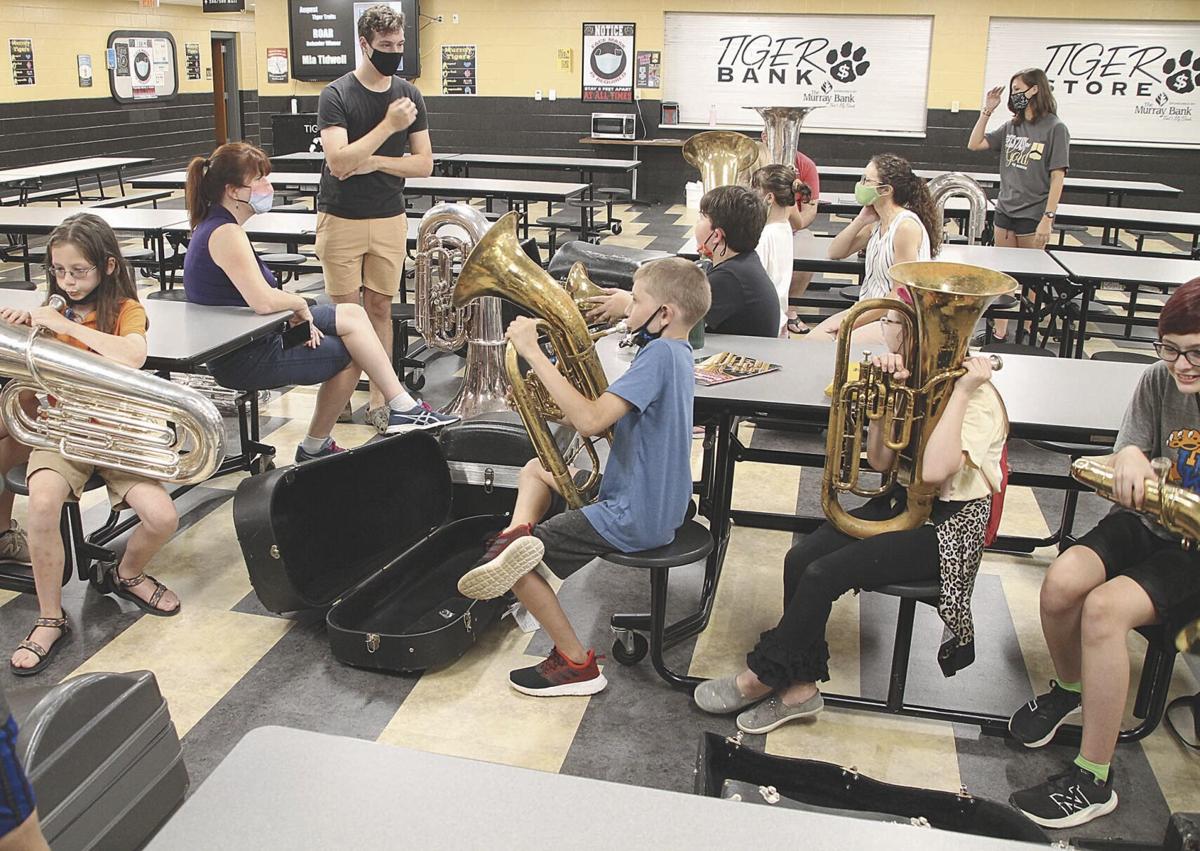 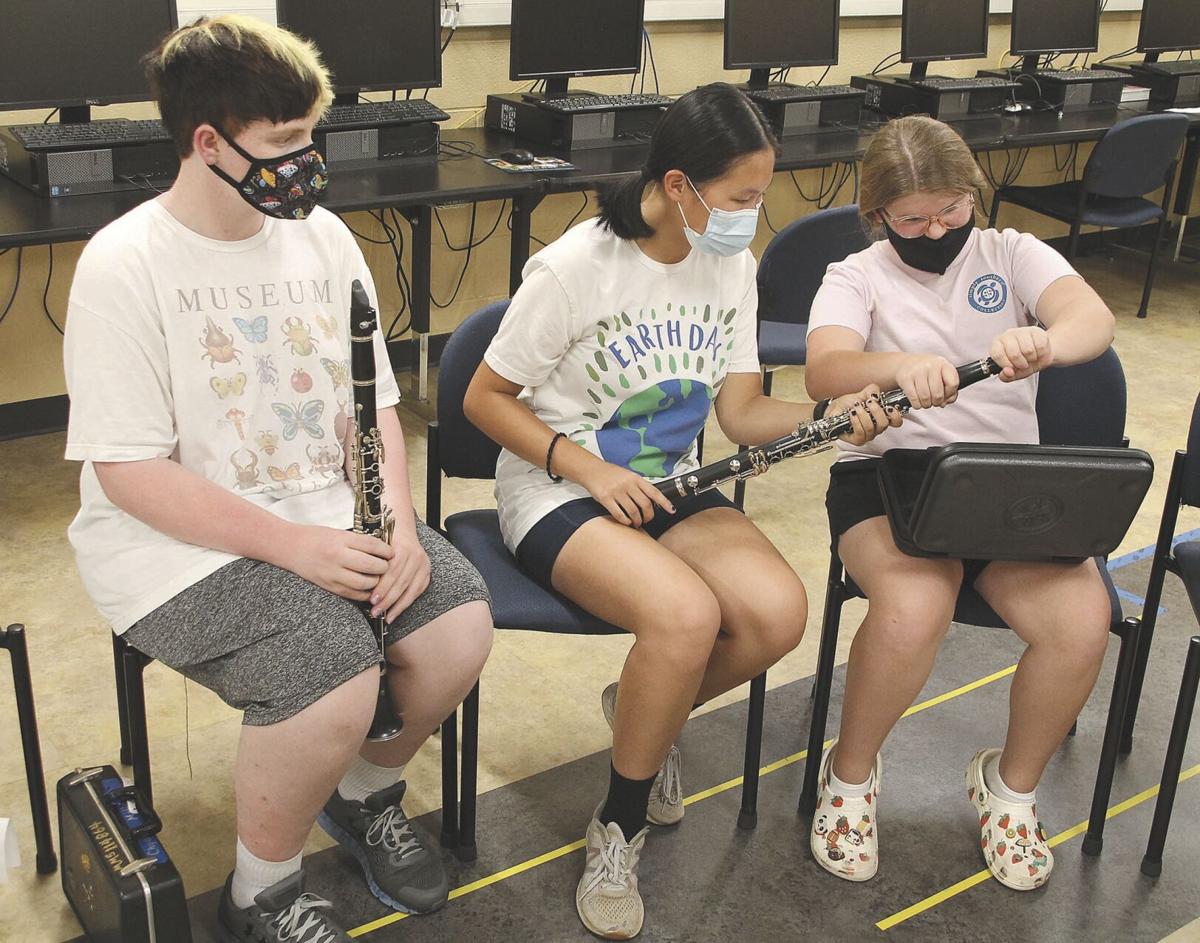 Murray High School sophomores Fern Carron, left, and Rianna Peng assist sixth-grader Carley Bell with her clarinet at Monday’s Sixth Grade Band Kickoff. Students spent time learning inside after Neal Bradley announced each of the sixth grade students on the practice field as they were handed instruments by high schoolers.

Murray Middle School band director Beth Stribling describes to Neal Bradley how excited her students were to hear he would be announcing their names at the Sixth Grade Band Kickoff Monday.

Murray High School sophomores Fern Carron, left, and Rianna Peng assist sixth-grader Carley Bell with her clarinet at Monday’s Sixth Grade Band Kickoff. Students spent time learning inside after Neal Bradley announced each of the sixth grade students on the practice field as they were handed instruments by high schoolers.

Stribling has been the band director for MMS for 35 years and had wanted to do something like Monday’s event – which was called the “Sixth Grade Band Kickoff” – for some time. With the cooperation of MHS Band Director Tim Zeiss and his band members, they made it happen on the MHS practice field, followed by some time inside with each instrument section working in a different classroom. To add a bit of extra prestige to the event, Stribling asked Neal Bradley, the “Voice of the Racers,” to announce each of the incoming sixth-graders. As the names were called, many of the high school students handed the new band members their instruments.

In the opening announcements, Bradley noted that the Tiger marching band won the national championship at the Bands of America National Marching Competition 44 years ago, and since that time had performed in the Macy’s Thanksgiving Day Parade and the Orange Bowl parade. He also mentioned that the Murray High Jazz Band was selected to perform at the prestigious MidWest International Band Conference, and the band was also crowned back-to-back champions at the 2017 and 2018 KMEA (Kentucky Music Educators Association) State Marching Band Competition.

“Why mention this now when we are here to celebrate our incoming sixth-grade band members?” Bradley read from his script. “Because all the musicians that performed at such high levels over this 44-year period all began like these students we are honoring tonight. They were all once beginning musicians like these sixth-graders who are looking forward to an incredible future as part of the award-winning Murray Tiger Band.”

Stribling said that when she told her sixth-graders that the Voice of the Racers would be announcing them, they gasped.

“All these kids went, ‘Oh my gosh!’” Stribling said laughing. “You would have thought I said, ‘Dick Vitale.’”

“It was an amazing honor to be asked to do something like this,” Bradley said. “I grew up (listening to marching) bands. I was never in one, but I’ve always appreciated what they’ve been able to do. I’ve never really gotten to watch what happens on the ground floor; I just see the finished product out on the field, but it is amazing. And to join such a tremendous tradition as the Murray High Band, I’ve been able to watch what the band has accomplished over the 40-something years. And to see these youngsters get that first step – and who knows what they’re going to accomplish? – I know I was very excited to do something like this for them.”

Stribling said she is always trying new things to make the band experience more special for her students. She recalled how in 1988, MHS’s band camp was held at Bethel College and the program started having “big brothers” and “big sisters” mentor the incoming freshmen. Eventually, that type of mentorship made its way down to the middle school level, she said.

“Ever since I’ve come here, I’ve used high school students to help instruct the middle school, and we’ve just fostered this sixth-through-12th grade family relationship,” Stribling said. “Over (the COVID-19 pandemic), I was listening to podcasts and stuff like that just to try and see how other people were handling things, and they were talking about ways to make recruitment really special and try to get kids to join band. They were talking about having activities like sports drafts, and that’s when I started thinking about what we could do here. And this is what it morphed into.”

“The sixth grade kickoff was an absolute home run!” Zeiss said. “It was so cool to see the excitement on the sixth-graders’ faces and to see the high school students lead the instruction. I definitely think this will become an annual tradition!”

Rianna Peng, an MHS sophomore, plays clarinet for the Tiger Band and described how she felt about showing the sixth-graders how to assemble their new instruments and start playing.

Fern Carron, another sophomore clarinetist, said, “I think it’s a good opportunity that (the sixth-graders) have, and I’m glad they get to learn from older people how to work their instrument.”

Ginny Chipman, a sixth-grade tuba player, said her older sisters, Anna and Kate, are also in band, and her father, Mike, teaches at MHS.

“I’m going to be playing the tuba, and I joined the band because my sisters were doing it and I thought it would be fun,” she said. “(The presentation) was fun and I look forward to learning new songs.”