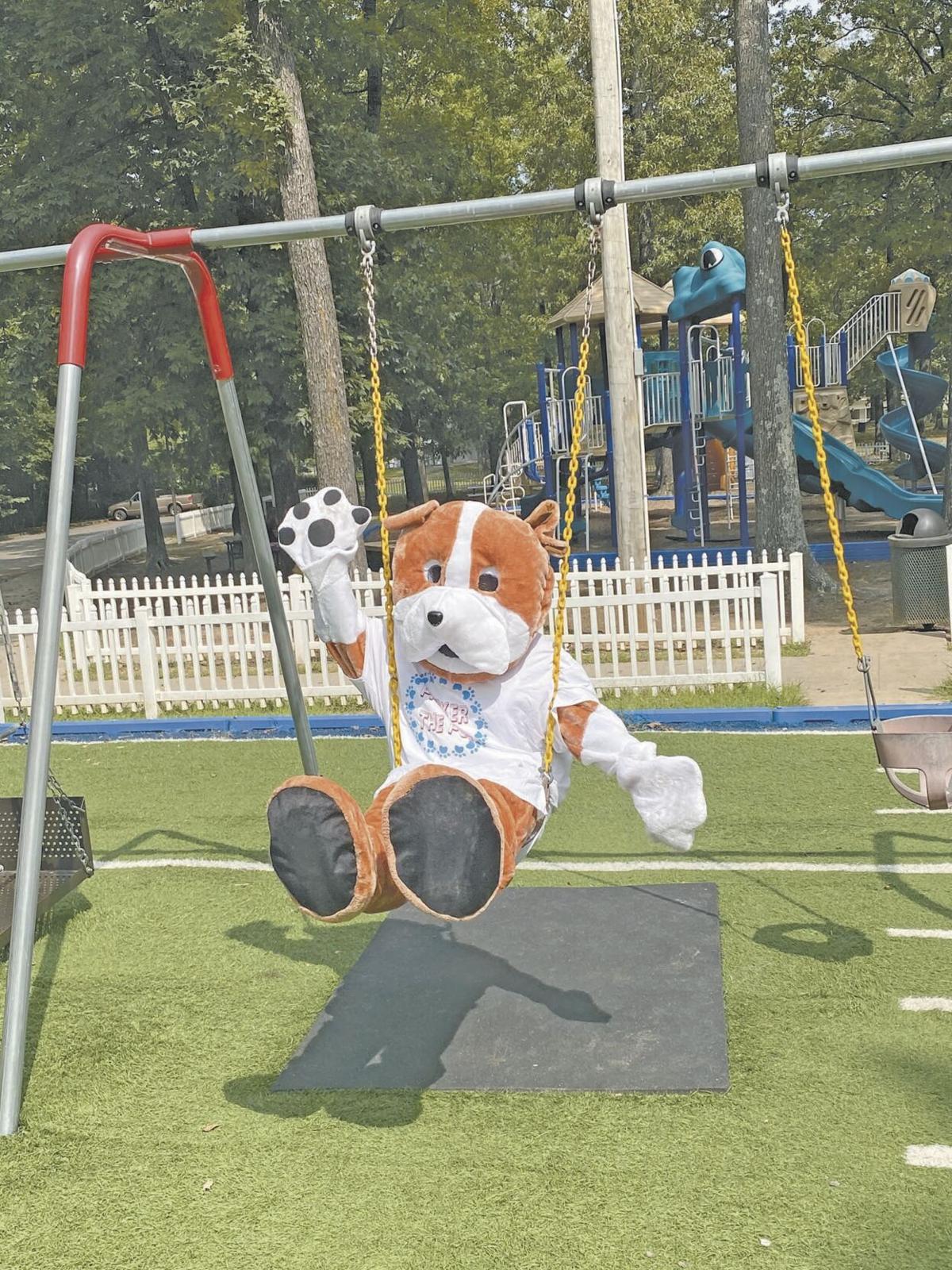 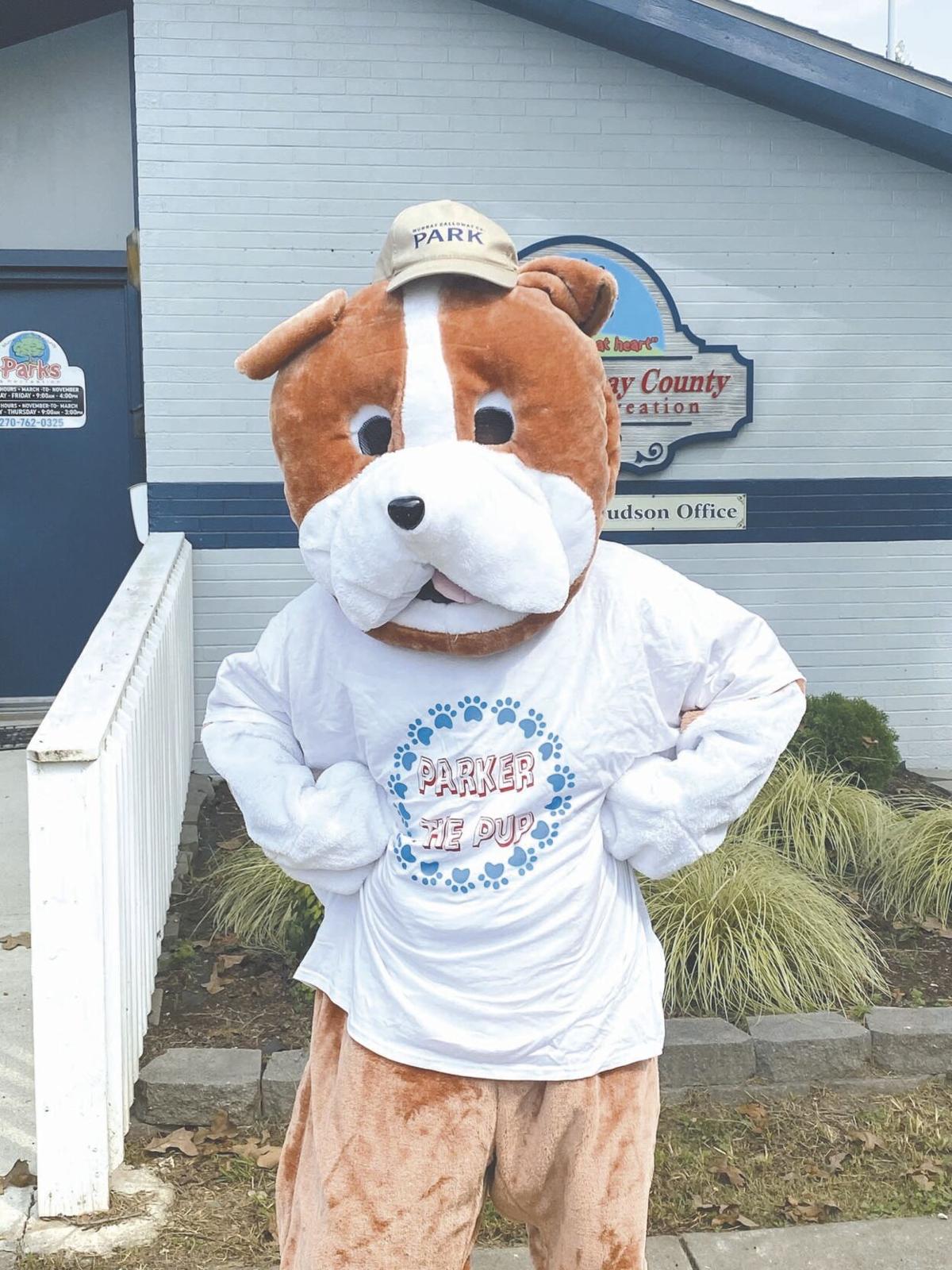 MURRAY — Eventually, once the COVID-19 pandemic begins to fade, visitors to Murray-Calloway County Parks and Recreation events and activities will begin to see a promoter of the service.

It is Park/Grrr the Pup, who was actually adopted a few months ago, but has not had too many chances to be seen in the community because of the pandemic. Parks Director Ryan Yates said a costume of the canine, a bulldog, has already been acquired.

He ought to know. He himself was the one who wore it for a trial run.

“The person who has liked it most so far is my 1-year-old son, Laken,” Yates said, remembering what happened when he brought the getup home one day. “That was the first day we had a chance to try it on, so I went upstairs at our house and put it on and had Alexa play ‘Who Let the Dogs Out’ and I come downstairs with that big puppy suit on.

“Oh my gosh! You would’ve thought Santa Claus had come for real. I wore that costume and Laken just had the biggest time with it.”

That is the kind of reaction Yates and other parks officials hope Park/Grrrr will create when he makes his appearances at events such as ball games. movie nights at the park, as well as community activities such as Easter egg hunts and Freedom Fest events in which the parks are incorporated.

“This all actually started about two years ago. (Murray-Calloway County Park Board Chairman) Jason Lovett and I were talking either before or after a board meeting and he said, ‘You know what would would be cool would be for us to have some type of mascot that maybe could go with our logo.’

“I agreed. Now, anybody who knows me know that I’m going to connect everything to sports, so I began thinking about Stanford University and how they have a big tree for their mascot. I thought, ‘You know we’re a park, right? We should get a tree like they have.’

“John Gorrell (who was Parks and Recreation’s program director until leaving in August to take a job in Bowling Green) was with me in the office that day and he heard me talk about the tree. He said, ‘Man! You will scare every kid off if you have a big tree that talks.’ I thought, ‘Good point.’”

So Yates and others went back to the drawing board. They looked at local mascots like those at Murray State, Calloway County and Murray High, but quickly decided choosing one of those could cause problems with the others. A cardinal made sense, being the state bird of Kentucky, but it also is the mascot of the University of Louisville, whose bitter arch rival is the University of Kentucky Wildcats, which has a very loyal and large fan base in the Murray area. That could not happen.

“We thought about something fierce, like a lion, but we don’t have those here. So we asked, ‘What do we have in our park? Ah yes! We have a dog park,’’ Yates said. ‘And we don’t highlight it enough, so we said, ‘This could be related to the dog park.’ Besides, who doesn’t like a good puppy?

“So I was talking to John about it again and asked him, ‘Now, for the name, what about the name Park with a slash and grrrr, like growl?’ So we went with Park/Grrrr and I think it shows that we’re family-friendly and that’s one of the big things about this community too.”

The board received its first glimpse of the new idea during the April board meeting when Gorrell actually wore the costume when the meeting was conducted by virtual communications. It was well received by the board members, who, back then, were in need of a boost of energy after the decision to close the parks in late March due to the pandemic.

“We’re glad to have Parker joining our staff. Park/Grrr’s going be a great addition to the park staff,” Lovett said.

Yates also said plans are for Park/Grrr to make appearances outside the park as well, particularly at local schools, as a way to promote park programs to a wider audience.