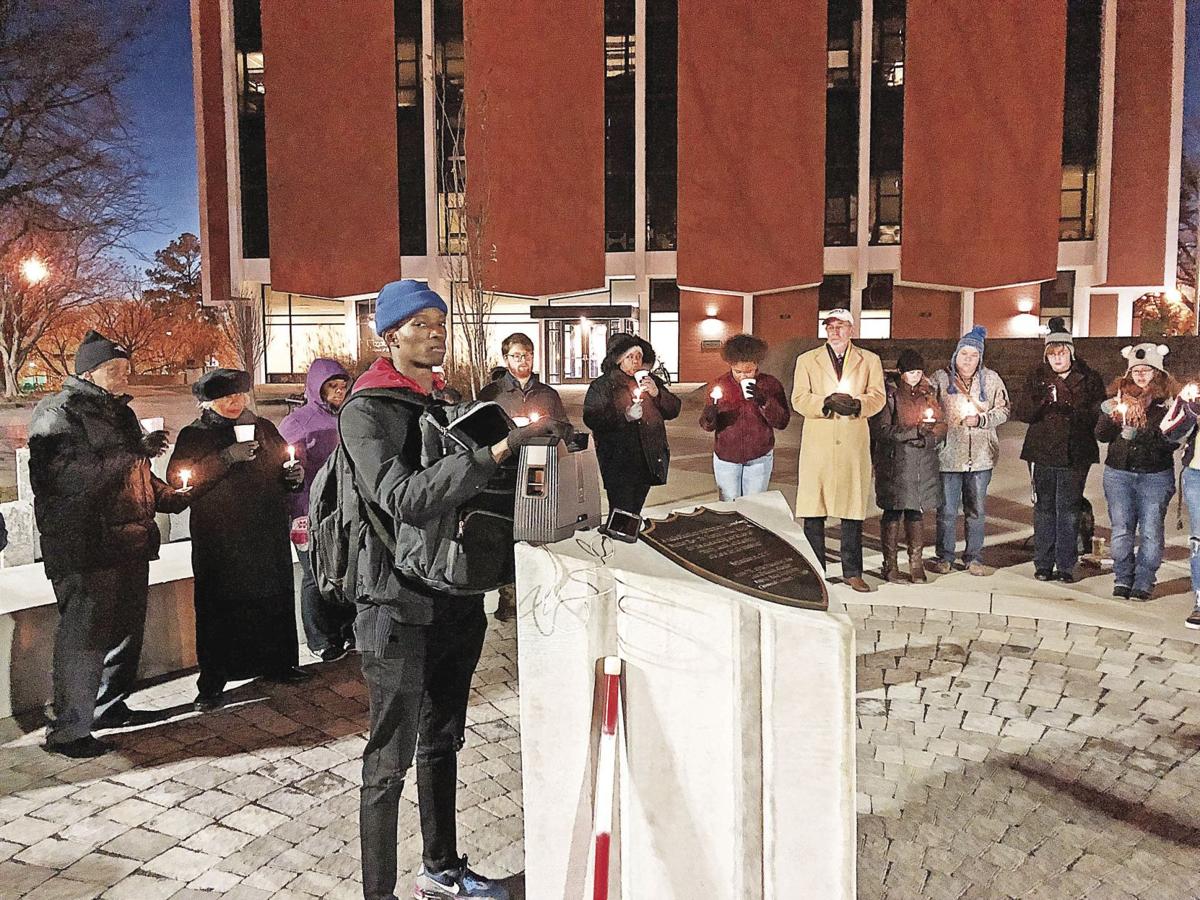 Participants that included students, faculty and staff of Murray State University, as well as local residents, are shown during the 2018 candlelight vigil that came at the end of the annual march that observes Martin Luther King Jr.’s birthday. The march ends at the MLK monument between Elizabeth Residential College, background, and Hollis Franklin Hall. 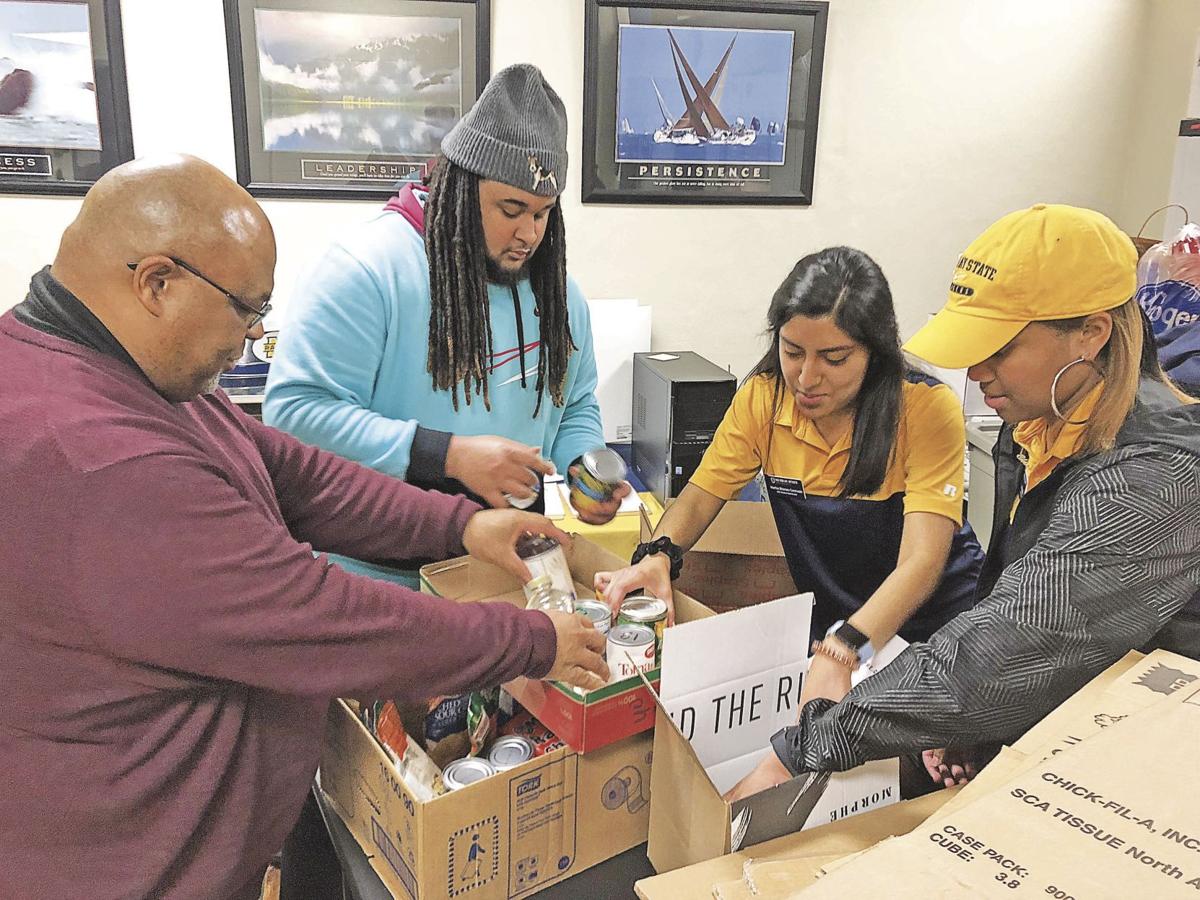 Participants that included students, faculty and staff of Murray State University, as well as local residents, are shown during the 2018 candlelight vigil that came at the end of the annual march that observes Martin Luther King Jr.’s birthday. The march ends at the MLK monument between Elizabeth Residential College, background, and Hollis Franklin Hall.

MURRAY — With classes starting a week earlier than usual, hopes are that more students will be able to participate in the annual observance of civil rights leader Marin Luther King Jr. at Murray State University.

Activities move into full swing Sunday afternoon with the annual march from The Quad to the MLK monument between Elizabeth Residential College and Hollis Franklin Hall. That will be followed by the actual day of observance Monday, with a breakfast starting at 8:30 a.m., as well as the annual Day of Service exercise in which community members have a chance to participate in an idea King strongly encouraged, helping one’s fellow man.

This will be exhibited in two parts. One is the traditional donation of items, such as food, household products, personal hygiene items and more at the Curris Center, while teams of volunteers will also be donating their time on the federal holiday to help the local agency Sleep in Heavenly Peace construct several beds that can be used by various groups in the community.

“We’ve actually been having people bringing in stuff this week (to the Marvin D. Mills Multicultural Center on the first floor of the Curris Center),” said Dr. S.G. Carthell, director of multicultural affairs at Murray State. He said anyone wishing to make donation today can bring items to the Mills Center through 4 p.m. Donations can be made Monday from 8 a.m. to 4 p.m. at the Curris Center Ballroom on the third floor.

“Because school started so early this year, we’ve got a whole week to work on (the MLK schedule) and that’s one of the reasons we said, ‘Hey! Let’s incorporate some external projects and get more stuff involved this year (such as the bed construction from 11 a.m.-4 p.m. Monday at the former Fred’s location in the Bel Air Shopping Center). We also decided to start collecting stuff for the Day of Service earlier than usual, and we’ve got a quite a stack already.”

Carthell said this is one of the most-anticipated events for him on the campus annually. He said King’s memory and principles are the reason.

“One of the things Dr. King stood for is everyone working together and, obviously, judging everyone by their character versus the color of their skin, things of that nature. He was concerned about people who were low income, people who are poor and struggling. He crossed those barriers and I think that’s why it’s important, more so now with all of the polarizing things we have on the national climate level and even the state level,” he said.

“It’s good to see good people like we have here in Murray celebrate the ideals of this great man and what he stood for and the fact that those of us are still able to say, ‘Hey! That was a good idea and it’s what he stood for.’ still means something to us.”

Carthell also said that with the setting for this weekend being a college campus, the opportunity is in place for valuable lessons to be learned, even though an assassin’s bullet ended King’s life in April 1968.

“This is a chance to educate our younger people, here on the campus and throughout the community, especially those that have only seen him as part of a cartoon or a Powerpoint presentation when they were in school, or a movie or something like that,” he said. “We have issues on this campus, but I think overall we have really tried to face those.

The keynote speaker for Monday’s breakfast will be U.S. Army veteran and Murray State alum Col. Charlie Sanders, who served 30 years in that service, including tours of duty in Iraq, Somalia and East Africa.

Sanders is also expected to attend the march that starts at 5:30 p.m. Sunday. The starting point is the historical marker that commemorates the integration of the Murray State campus in 1955. Once at the MLK monument on the other side of the campus, participants will gather for a candlelight vigil that will include the traditional airing via loudspeaker of King’s 1963 “I Have a Dream” speech at the Lincoln Memorial in Washington.

Last year’s march was canceled due to poor weather conditions. That is not expected to be a problem Sunday, though it will be cold.

“We’ve handled that before, though,” Carthell said, smiling.