Lovett Auditorium has been closed since the fall so it could undergo a massive renovation of the venerable arts and entertainment facility. That has resulted in a sight that only workers have been able to view, all of the floor seats being removed, leaving only the hardwood floor. 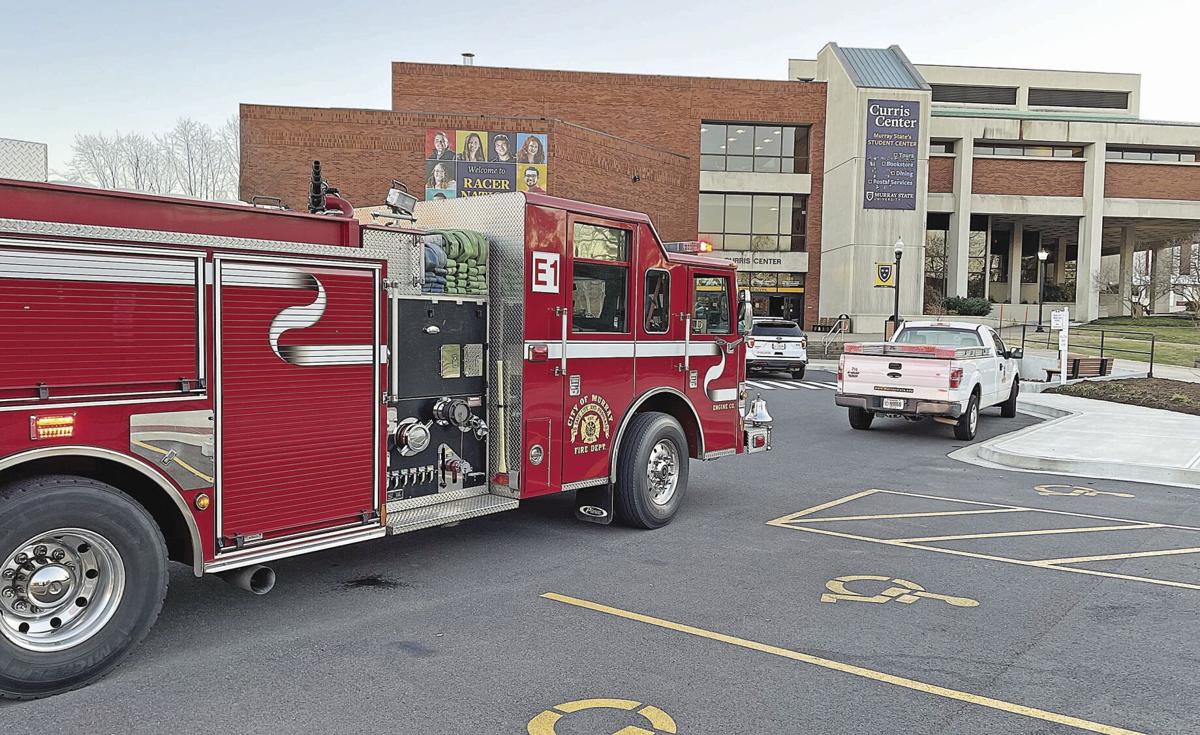 It is scenes like this — a Murray Fire Department engine company responding to a December 2020 water leak at the Curris Center — that  Murray State Regents are hoping to avoid with the approval of the issuance of $12.3 million in bonds for a variety of deferred maintenance projects, including a renovation of the Curris Center.

Lovett Auditorium has been closed since the fall so it could undergo a massive renovation of the venerable arts and entertainment facility. That has resulted in a sight that only workers have been able to view, all of the floor seats being removed, leaving only the hardwood floor.

It is scenes like this — a Murray Fire Department engine company responding to a December 2020 water leak at the Curris Center — that  Murray State Regents are hoping to avoid with the approval of the issuance of $12.3 million in bonds for a variety of deferred maintenance projects, including a renovation of the Curris Center.

MURRAY — From the first meeting Dr. Bob Jackson led as Murray State University’s interim president in August 2018, he has preached about a term known as “deferred maintenance.”

He hosted that first meeting, the annual Regents retreat, inside one of the oldest buildings on the campus — the Wrather West Kentucky Museum. It was done to emphasize the need to make sure these historic connections to the past stayed in place.

From the start of Jackson’s tenure as interim president, and when he became the university’s 14th president officially in March 2019, there has been a Regent that has joined him as an outspoken foot soldier in this quest — Dr. Don Tharpe of Nicholasville. In fact, at times, Jackson has referred to Tharpe as “Mr. Deferred Maintenance,” because of his dogged determination to make this a sticking point.

So it probably should not come as a surprise that as a vote ended during last Friday’s meeting of the Regents to approve the issuance of $12.3 in bonds that were authorized earlier by the Kentucky General Assembly for several major projects dealing with this very topic, Tharpe applauded.

“Exactly! It’s a been long time, looking for a commitment on the part of the university to take care of its buildings long term. It’s not something that’s going to be easy to do, but it’s something we need to do,” Tharpe said after the meeting, flashing a big smile as he discussed the unanimous vote that approved the bonds. “If we don’t have this kind of investment in the university, then we won’t be doing a service to the community, so I clapped because I was really glad to see us make that commitment. Ever since I’ve been on the board, I’ve waited for this.

“‘Mr. Deferred Maintenance?’ Absolutely! During my first board meeting (in mid-2017, a year before Jackson was named interim president), I said that we owe it to the students and to the taxpayers that our students stay in strong housing areas and that we didn’t have buildings that were collapsing around them and I think we’re moving toward making that happening. You know, I was fearful of being labeled a one-trick pony by only talking about deferred maintenance, but I feel so passionate about this because, if we don’t take care of Murray State University, it just goes away.

The bonds, which must be issued by June 30, 2022, are designed to target eight specific projects:

• A major renovation of the Curris Center.

• Phase II of the renovation of Lovett Auditorium.

Jackson said that a lot of the reason the university is in this position is because of an asset preservation fee that was incorporated into students’ fees in 2019.

“That’s one of the best things we’ve done in many years,” Jackson said of the fee. “We’re able to take half of this fee and bond it and it allows us to catch up on very important projects.”

The university also has been resourceful with its money, the president said.

“We have lost about $20 million in debts the past five years. That means we have removed from our books a lot of debt that we no longer owe,” Jackson said. “From a debt standpoint, we monitor the levels very closely. We are at the bottom (among Kentucky state universities and colleges) in having debt, so we manage these things very closely.”

And it appears Murray State will have no debt issues with these bonds.

“Just to be blunt, this doesn’t put you anywhere close to where I think (bond credit ratings agency) Moody’s would say, ‘Hmmm, you’re a little too leveraged,’” said Mark Rawlings, director of the Milwaukee, Wisconsin-based Baird financial advisory group, who has been Murray State’s adviser on such matters for 15 years.

“Any time you’re issuing debt, you’re thinking about what this is going to do to the content of how it will affect your bond rating, which sort of dictates what sort of interest rates you’re going to get. One thing is we want to make sure that it’s not going to put the university in a bad position with regard to metrics that rating agencies look at.

“(Moody’s) looks specifically at two criteria in regard to how much debt you have outstanding officially as part of their score. Both of those put your limit at $140 million to $200 million of debt you could issue before you would really have dramatic downward pressure on your rating, so $12 million is really sort of a drop in the bucket.”

Phase 1 of the Lovett project is expected to result in the re-opening of that facility sometime in the fall 2021 semester. University Director of Facilities Management Jason Youngblood showed some photographs during the meeting that reveal Lovett in a form most have never seen, devoid of floor seats. Only the hardwood floor is visible as workers are adjusting the HVAC system from operating in the ceiling, which caused sound problems during performances, to being generated from the floor, which he said will be quieter.

Youngblood said Phase 2 would probably require about four months to complete and would involve additional HVAC work, as well as work on windows, doors and curtains.

Wrather is need of a new boiler and curtains. Jackson also said that the stage in the auditorium is not usable because of structural problems. Stage work is also included in the list that the bonds will cover.

The Curris Center is also in need of multiple updates.

“It’s important to recruiting, it’s important to retention,” Jackson said of the deferred maintenance push. “It’s not glamorous to talk about, but things like replacing boilers and windows have to be done and they’re also important from a teaching and learning standpoint.

“So it is in need, like so many of these other buildings on campus, of love, care, attention and money and we plan on giving it that.”

Vice President of Finance and Administrative Affairs Jackie Dudley did caution that some of the projects on this list may not be doable due to a rapid rise in the cost of construction materials, which Youngblood acknowledged as well.

“The volatility of the workforce and the price of materials is really all over the place and we can’t get contractors to firm up some bids,” Dudley said, noting that the top three projects on the list — Curris, Wrather and Lovett Phase II — will receive highest priority.  “So we may not be able to finish them all but we will do as much as we can.”