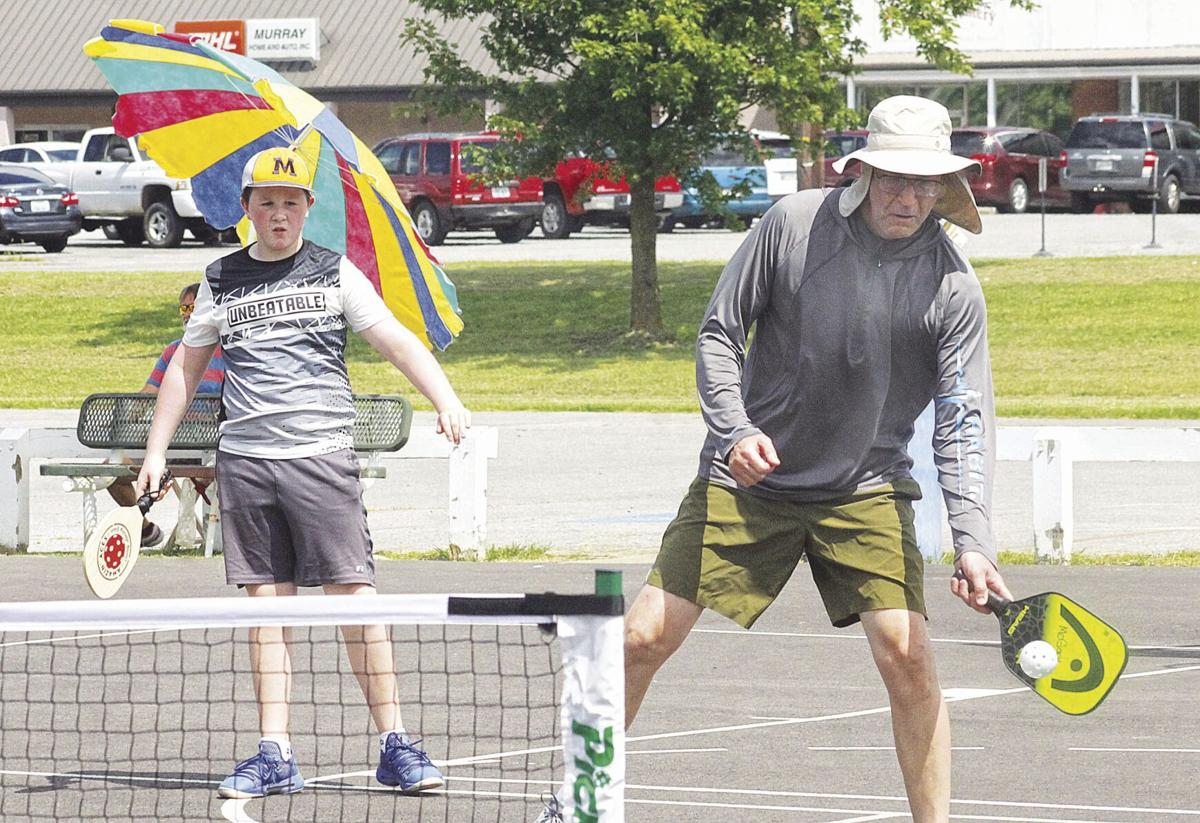 David McGary of Almo, right, attempts a forehand get as his grandson, Joseph Vaughn, 11, also of Almo, watches the attempt near the net Saturday morning during a match in the first pickle ball tournament at the newly-installed pickle ball courts at Chestnut Park in Murray. 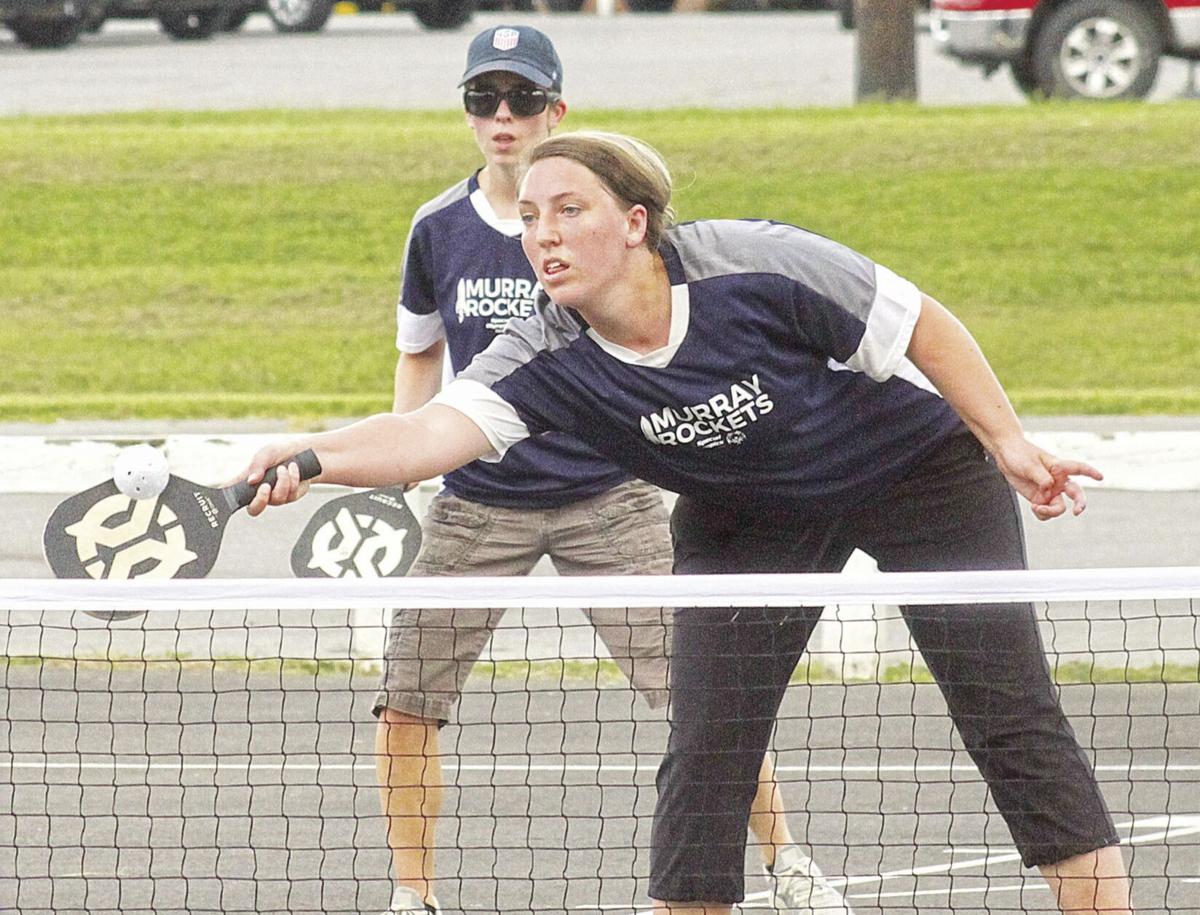 Murray’s Leigh Toby reaches for a forehand shot as her partner Jennifer Torsak, also of Murray, watches the action from the rear of the court Saturday morning during a pickle ball tournament at the new courts at Chestnut Park in Murray. About 30 players from throughout the region participated in the first public event at the facility since the courts were added earlier this year.

David McGary of Almo, right, attempts a forehand get as his grandson, Joseph Vaughn, 11, also of Almo, watches the attempt near the net Saturday morning during a match in the first pickle ball tournament at the newly-installed pickle ball courts at Chestnut Park in Murray.

Murray’s Leigh Toby reaches for a forehand shot as her partner Jennifer Torsak, also of Murray, watches the action from the rear of the court Saturday morning during a pickle ball tournament at the new courts at Chestnut Park in Murray. About 30 players from throughout the region participated in the first public event at the facility since the courts were added earlier this year.

MURRAY — For the past several weeks, passersby of Chestnut Park in Murray have probably noticed a rather unusual activity being played on the basketball courts of the park.

It involves some sort of racquet sport. There is a net and players are using something to strike a ball and send it over the net. And slowly, officials with Murray-Calloway County Parks and Recreation have started identifying this game by its name — “pickle ball,” which is a hybrid of several games, namely tennis, badminton and ping pong, all in one.

On Saturday, it was decided to bring this game into the public eye as Parks and Recreation hosted a tournament that was not offering prizes and acclaim so much as it was to promote the game. It attracted about 30 players from throughout the region, including at least one player from Florida, a state where this game is very popular.

“We are extremely happy with this,” said Parks and Recreation Program Director John Gorrell. “We’ve got about 13 teams here today and a few other individual players. We had eight teams going into (Friday), though, so we had quite a few join today.”

Murray and Calloway County provided the vast majority of the players and that group consisted of players who have been using the Chestnut courts that were established in June. The courts were part of a larger renovation project of the basketball facility.

One of those players is David McGary of Almo, who played doubles Saturday. His partner was none other than his 11-year-old grandson, Joseph Vaughn, with whom he has played many games the past month,

“It’s really neat, getting to play with him like this,” McGary said between games Saturday. “We’ve actually been playing for a month or so before (Parks and Recreation) received their nets here. We play in our driveway.”

Most of the Murray-Calloway players seem to be part of the same group. They had played racquetball at the Susan Baurenfeind Health and Wellness Center on the Murray State University campus before that activity was halted because of the COVID-19 pandemic. So, in search of a way to pass the time, pickle ball became an outlet when it was learned Parks and Recreation was seeking to bring it to Chestnut.

“Since then, several of us have bought our own nets and we’re bringing them out here,” McGary said. “At any one time, you may see 13 of us playing out here.”

McGary said that the first time he saw pickle ball was when the Kentucky State Senior Games came to Murray about eight years ago. He had signed up as a racquetball and tennis participant. Along the way, he heard talk about pickle ball, which marked the first time he had ever heard about it.

“They said, ‘It’s happening at (the CFSB Center), so I went and watched it and thought, ‘Hmmm, this is pretty neat,’” he said. “Then we go to Gatlinburg (Tennessee for a vacation) and there was a group of guys that played racquetball and they let me play with them, but they also played pickle ball and we did that too. The second time I went over there, a few years later, I saw that same group and they had pretty much stopped racquetball altogether. They just played pickle ball.”

Murray-Calloway County Parks Director Ryan Yates said he was introduced to the game during gym class in the mid-2000s at his alma mater, Muhlenberg North High School in Central City. However, current Murray State Assistant Director Athletics/Media Relations Dave Winder said he was playing pickle ball earlier than that, the mid-1980s to be exact.

“We actually used to play in the winter,” Winder said Saturday, recalling how Murray State coaching legend Johnny Reagan had his baseball teams involved with it during the off season. “We played it in the North Gym.

“I was with the bunch that was playing racquetball (at the Baurenfeind Center) and decided, ‘This looks like fun.’ And I know it actually is, from playing it back then. It’s a great game, but what’s really great to me is that you look out here and you’ve got kids who may be 14 and other people who are 80 playing. The way the game sets up, you’re able to mix a lot of age groups together.”

George Long of Benton said he had two reasons for being in Murray Saturday. First, he wanted to see the Murray facility up close because, second, he has a vested interest in the community embracing this game.

“I’m a Murray State graduate and a member of the Murray State Foundation Board and I can see this being part of the university,” Long said. “The kids can do this. There’s not a lot of things you can play right now, but you can distance with this game. They can play here or, what I would like to see, is to overlay the tennis courts like they did here at the park with their basketball courts.”

Long has been playing for two years, having become part of a large group in Calvert City that was started by Parvin and Darlene Latta out of First Baptist Church in that community. They felt driven to bring pickle ball there after seeing how popular it was in Florida while vacationing there several years ago.

“We’ve got about 160 signed up to play and we’re having some people find out about it who are from out of town and coming here to stay a few days and we’ll let them play with us,” Darlene said. “It’s just getting started here in western Kentucky.”

“We knew there were some Murray players, but we just never could find them,” Parvin said. “This is good to finally see them here today.”

Gorrell said information about Parks and Recreation’s rental specifics for pickle ball will soon be available on both its website, www.murrayparks.com, and its Facebook page.