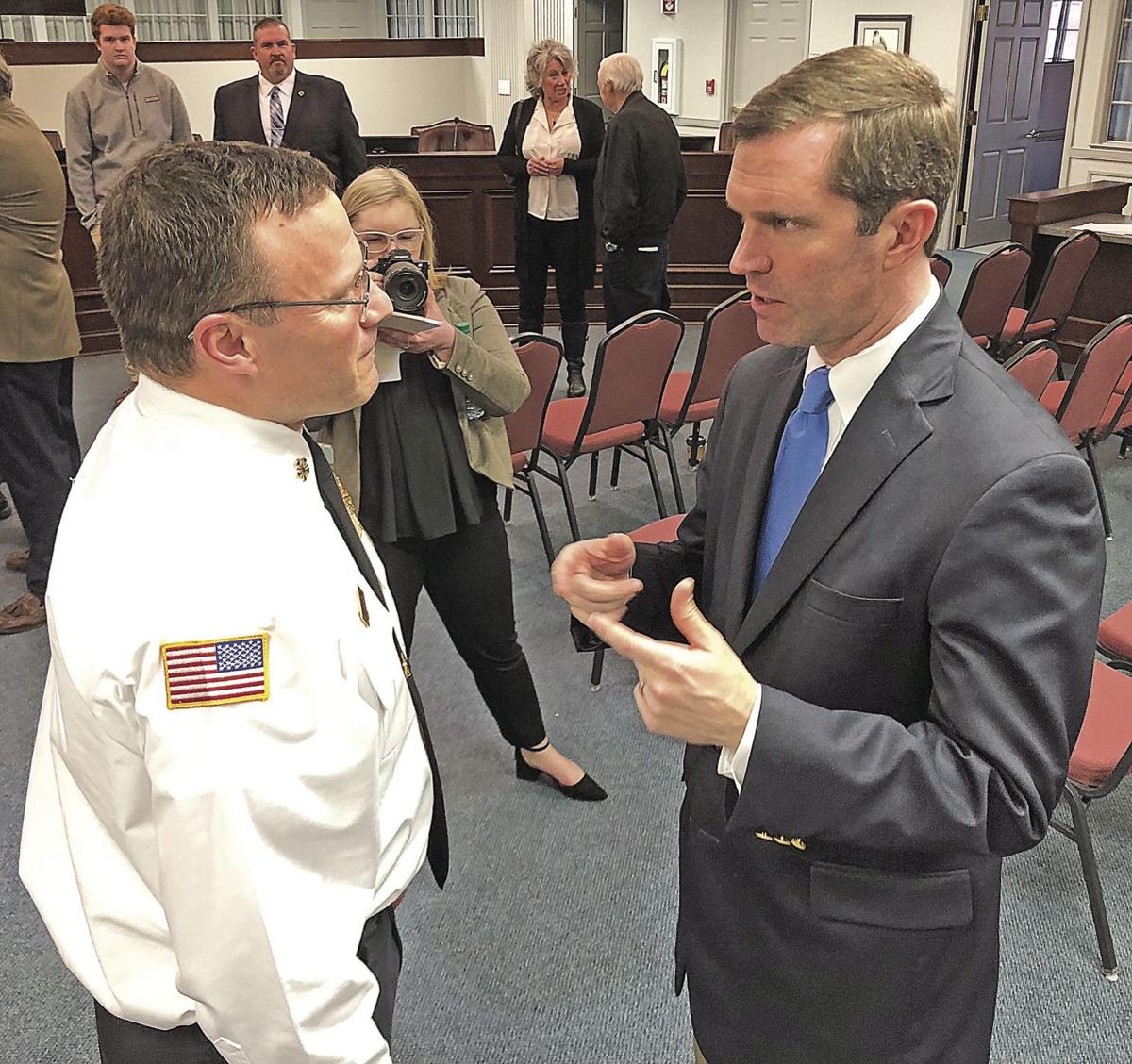 City of Murray Fire Chief Eric Pologruto, left, listens to Kentucky Gov. Andy Beshear Monday inside City Hall in Murray. On a day where Beshear visited four western Kentucky communities during his first major travel day as governor, Beshear announced a $500,000 had been awarded to the city for the construction of a new fire station. 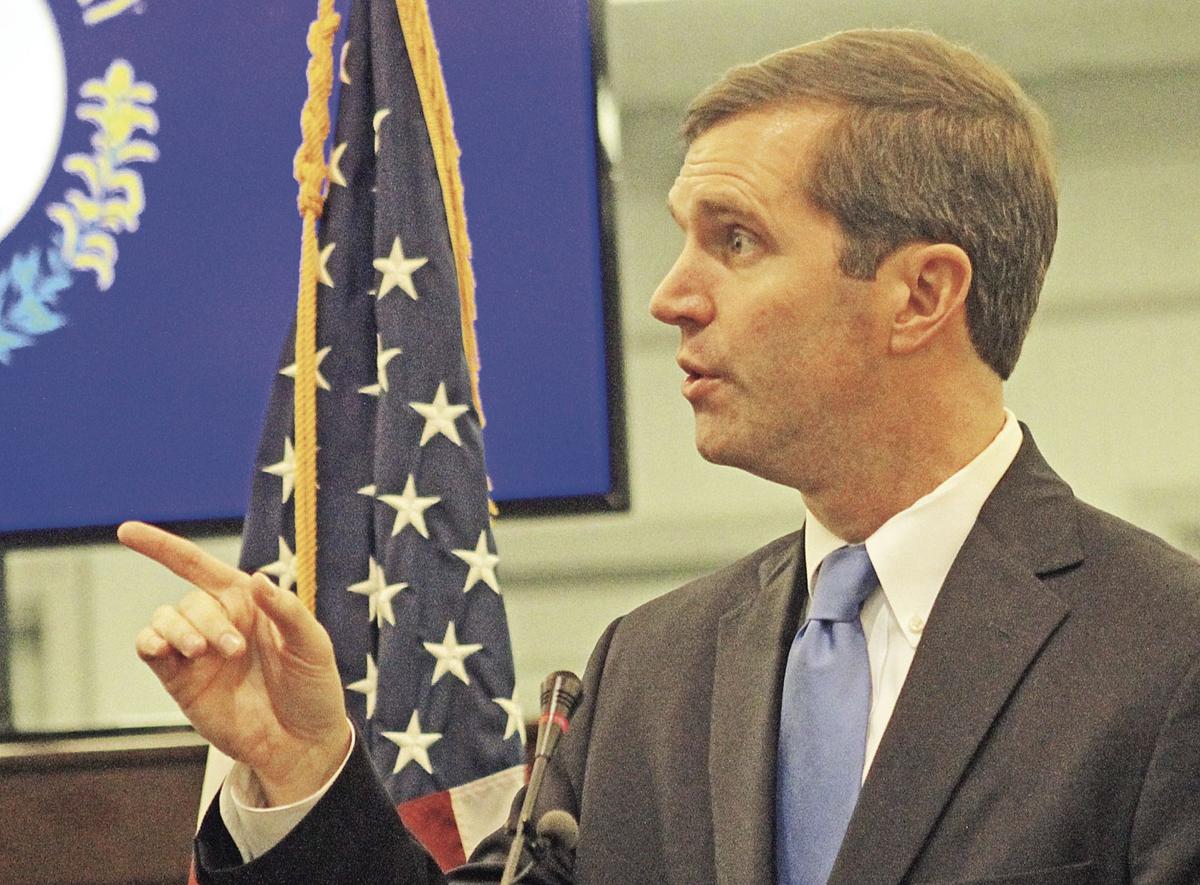 Kentucky Gov. Andy Beshear makes a point during his speech Monday in Murray.

City of Murray Fire Chief Eric Pologruto, left, listens to Kentucky Gov. Andy Beshear Monday inside City Hall in Murray. On a day where Beshear visited four western Kentucky communities during his first major travel day as governor, Beshear announced a $500,000 had been awarded to the city for the construction of a new fire station.

Kentucky Gov. Andy Beshear makes a point during his speech Monday in Murray.

MURRAY — While in Murray Monday on his first major trip since taking office, Kentucky Gov. Andy Beshear took time to meet with local and area media, who asked a flurry of questions.

One of those pertained to Murray specifically and the ongoing and potentially crippling state pension payment requirements for both Murray State University – the community’s largest employer, as well as its most identified entity – and the City of Murray.

Murray State is facing a required obligation of paying more than 93% for non-hazardous workers, which is major uptick from the 49% of last year. In actual numbers, that equates to $5.4 million, which is on top of the more than $6.5 million for fiscal year 2019. Meanwhile, the city is already facing a five-year cycle that will have it going from paying more than $1.5 million this year to more than $3.5 million by 2025.

“The reason both Murray State and the City of Murray are facing these pension costs is because the state has forced most of those costs down on them,” Beshear said, “because the state refuses to raise the new revenue that could ultimately go toward these obligations.

“So you are going to see me press for new areas of revenue.”

Beshear seemed to indicate there will be several roads taken, but he mentioned two in particular. First was medical marijuana, which the Kentucky General Assembly still has yet to legalize.

The other is gaming.

“I don’t know if overall casino gaming is going to move or not in this session, but it should because we’re losing $500 million a year (from Kentuckians going to other states for this type of activity),” he said. “Kentuckians are doing that every day. Keep the dollars at home!”

Beshear did indicate that sports betting seems to be gaining momentum in the legislature and just might pass in the current session.

“That could generate $20 million to $40 million of revenue. Here’s how important that is, in context. We provide new textbooks to all of our children for about $17 million, so that means every chunk of revenue that comes in has an important place and an important purpose,” he said.

Beshear said western Kentucky is a high priority for him, which he admitted is related to his family roots in Dawson Springs, located in Hopkins County. That is where his father, Steve, a former two-term Kentucky governor, was raised and where his grandfather, Orlando Russell, was a Baptist pastor for 60 years and served as the town’s mayor.

“There is a lot to do and you’re going to see me a lot in western Kentucky,” Beshear said, repeating his statement from his speech at City Hall, where he had earlier announced a $500,000 federal grant that will help finance the construction of a new fire station. “The priorities for western Kentucky fall within where we’re going. We’ve got to create more jobs but also increase the wages on those jobs. We’ve got to make sure that every child in western Kentucky has health care coverage and we’ve got to make sure we’re providing a world-class education and breaking the cycles of poverty by getting people through high school and through college.”

The Louisville Democrat also said he wants to promote unity within state government, regardless of party affiliation. He said today’s times warrant that.

“It’s about setting the right tone, where we create an environment where we disagree but are not disagreeable and where we all have an obligation, where we have common ground and where we can find agreement to get things done,” he said. “What that also means is when we disagree, we have to do it civilly – no more name calling, no more bitterness. We’ve got to put those old wounds and our feuds behind us because the people of the Commonwealth of Kentucky are depending on us.”