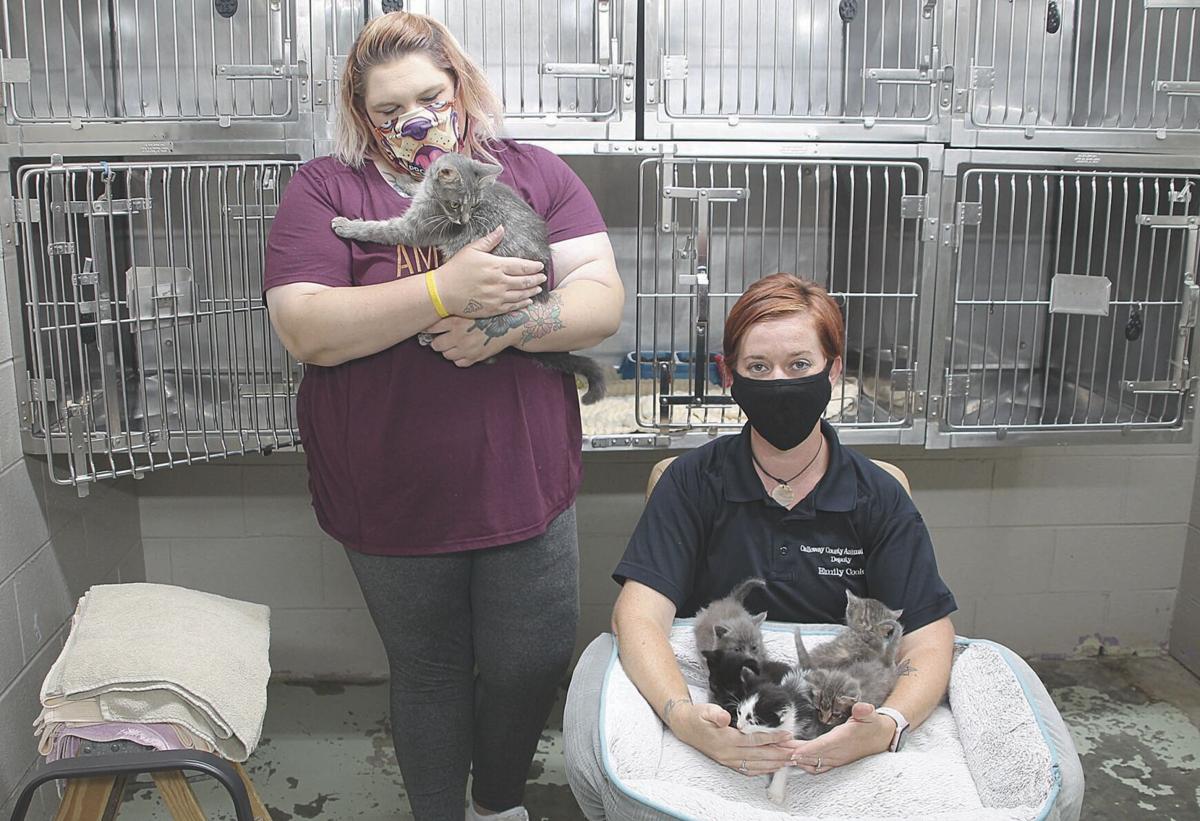 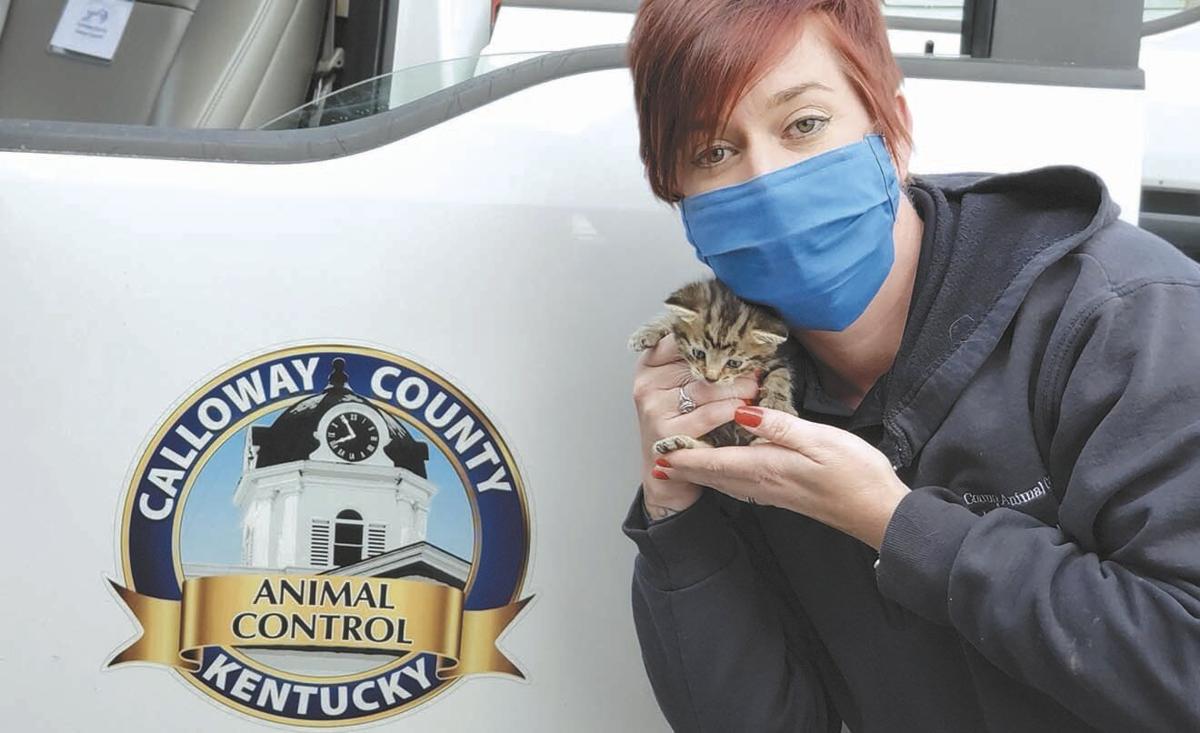 Calloway County Animal Control Officer Emily Cook is pictured with Archie, a kitten she is currently fostering who must be bottle-fed. 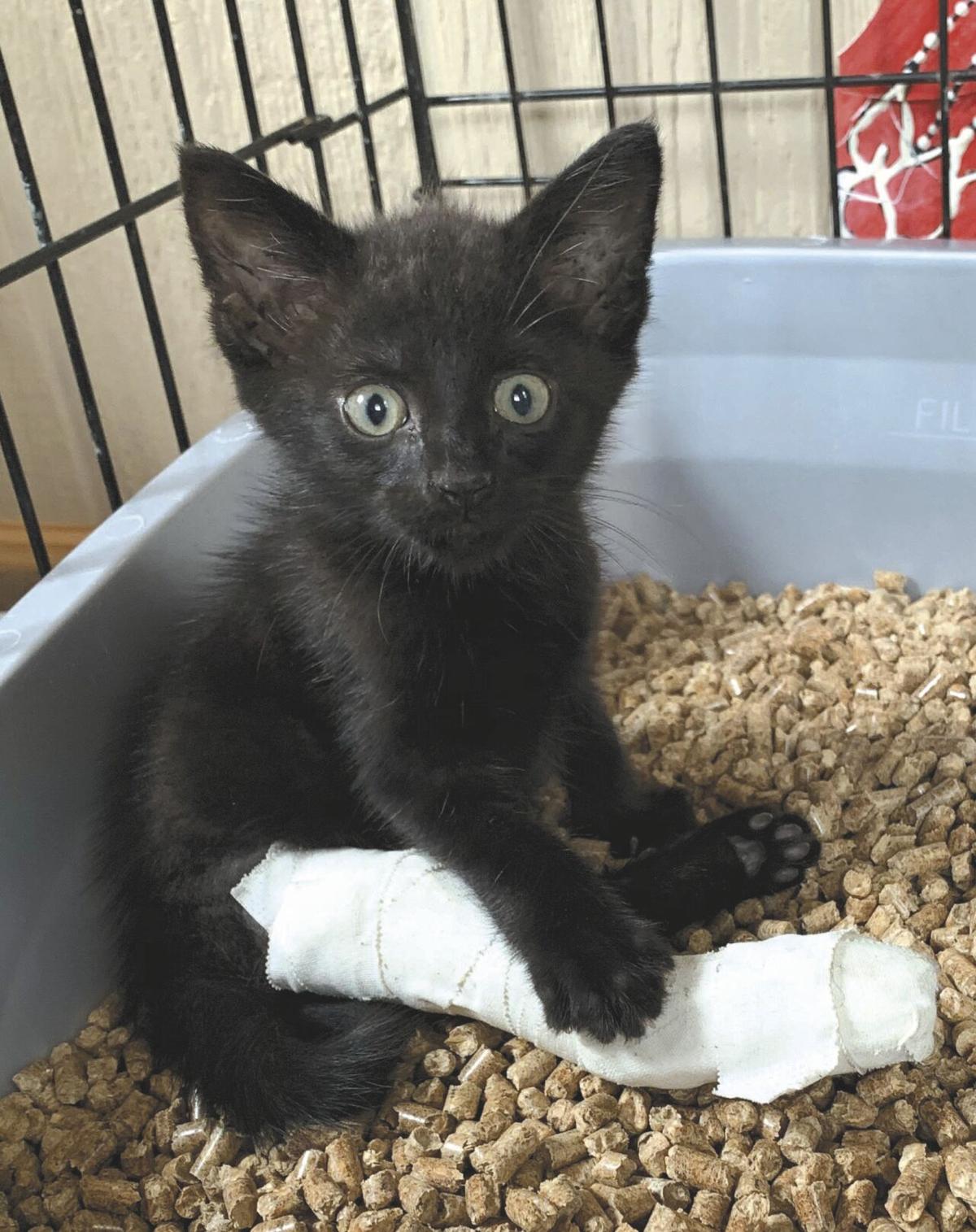 Calloway County Animal Control Officer Emily Cook is also currently fostering "Herbie," a kitten who was brought in with a broken leg.

Calloway County Animal Control Officer Emily Cook is pictured with Archie, a kitten she is currently fostering who must be bottle-fed.

Calloway County Animal Control Officer Emily Cook is also currently fostering "Herbie," a kitten who was brought in with a broken leg.

MURRAY – The Calloway County Humane Society and Calloway County Animal Shelter are asking for the public’s help with fostering cats and kittens as the shelter has seen a large influx of felines being brought in recently.

Humane Society Executive Director Kathy Hodge said “kitten season” – the time when un-spayed cats typically give birth – typically lasts from early spring into the fall. According to figures from the Calloway County Animal Shelter, so far this year, 148 cats under six months (53 in July) and 38 stray cats under six months (12 in July) have been taken in. Although Hodge said the numbers are about on par with most years, she and Calloway County Animal Control Officer Emily Cook said the numbers have picked up a lot in the last month or so.

“It’s kitten season, so summer’s always difficult and we see some of the same issues (this time every year), and the shelter is still under some restrictions related to the COVID-19 pandemic, so they are not able to take owner surrenders in the same fashion as they normally would,” Hodge said. “So we’re just trying to reach out in every direction that we can to make sure that all the cats are taken care of when it’s such a busy time of year. Mostly, we’re looking for help with animals that have special needs of some sort. Cats often come in to us with a variety of things that we could use help with.

“In the last couple of weeks, we had a pretty little kitten that was purring and sweet and with no behavioral issues at all, but it apparently had broken its leg early in its life and it never was tended to. So we were able to get its leg set and it will be fine because it’s such a young kitten and the kittens and puppies always heal so fast. But he needed to have some cage rest and some attention beyond the length of time he would be able to stay at the shelter.”

Hodge said the animal shelter has also seen a lot of kittens that are too young to be on their own and must be bottle-fed. One cat came in and gave birth to a litter right after it got there, she said.

Hodge said the shelter often gets feral kittens born to a stray mother that have not had any chance to be socialized. Although they may appear vicious at first, she said it doesn’t take them very long to get used to people.

“They’ll come in and just hiss and spit and act like they’re going to tear you up,” she said. “They’re these tiny things that would fit in the palm of your hand, and sometimes within 24 hours, but certainly within a few days, they will be purring and sitting on your shoulder or in your lap wanting to be cuddled. They need that time with a human being to be able to do that, so they need to stay with a foster for however long it takes for them to be social and ready to go to the rescue or be adopted.”

“We provide all the materials that you’ll need,” Hodge said. “That includes a crate to keep them confined (when needed) or if you need formula or kitten food or whatever it takes to get it done. We provide all of that because we don’t it to be a financial burden on someone to try to take care of a kitten. We’re delighted to do that because that’s something we can take care of, but (the animals) need people that have the time to do it.”

Cook is currently fostering some kittens, but she said the public’s help is greatly needed, especially since the regular foster families have taken in all the animals they can.

“We need people in the community to do this because if only the shelter staff and the few fosters we have do it, we get worn out,” she said. “It’s exhausting, and bottle-feeding especially is like being up with a newborn. That’s why we want other people to join in. Maybe it would also help with the spaying and neutering because they’ll see how many kittens and puppies and mama cats we have out there.”

Hodge noted that some people who have been off work or quarantined at home during the pandemic have decided to foster animals because they have had time they otherwise would not have had to give the animals their full attention. Cook said that although the animal shelter takes good care of the animals it houses, having a foster home is a much better situation for them.

“You want them to be out in a household and be handled,” Cook said. “It’s not terrible that they’re here because they are being well taken care of; we would just like them to not have to sit in a cage for six to eight weeks. And we don’t have the cage space to be able to do that with multiple litters. So fostering is definitely helping, and it’s the same with puppies.”

Hodge said this summer’s increase in kittens actually lagged a bit behind most years, as they usually start to pick up in March, but that didn’t start to happen until around May this year. She said she didn’t know why that might be unless people were just too distracted by the pandemic to be bringing in animals.

Cook said at the beginning of the pandemic, there were multiple adoptions, but that number dwindled down and the shelter is now having to house a large number of animals. She said she couldn’t explain the change, but she wondered if people had become more wary of adoption right now because of the financial hardships they are facing as the pandemic drags on.

As the pandemic continues, Hodge said the Humane Society cannot take every animal that comes in immediately, and the number of volunteers they can use has been limited. Only a certain number of volunteers can work at the shelter at any given time, though Hodge said there are dogs that need to be walked and there are fewer restrictions that need to be followed for volunteering done outside.

Anyone interested in fostering an animal may email humanesociety@murray-ky.net, message the organization on Facebook or call the office at 270-759-1884. If it is after office hours, leave a message.