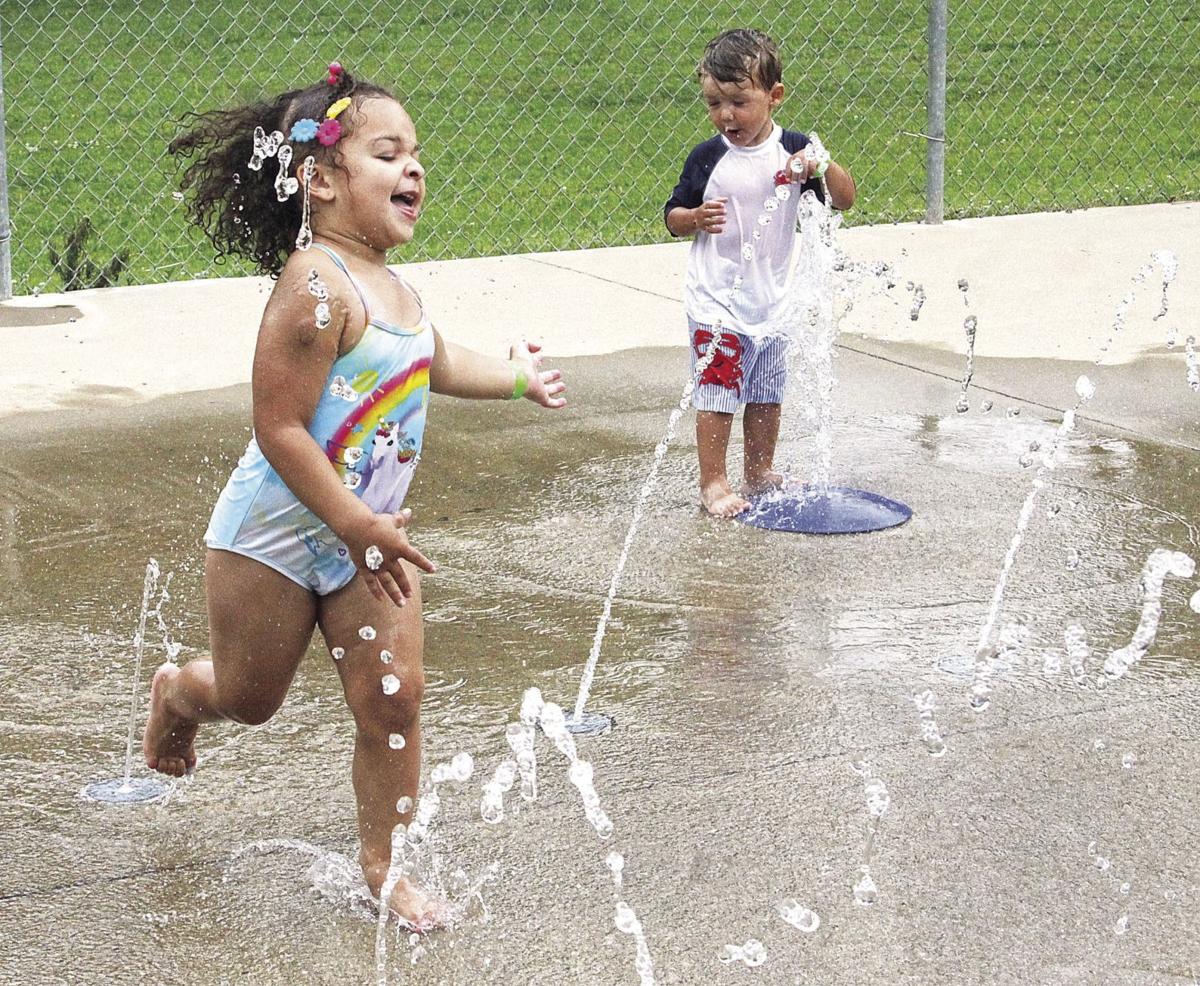 Raven Henson, 3, of Murray, dashes through water rising from fountains Monday afternoon at Owen's Station Spray Park inside Central Park while Benson White, 2, of Murray, reacts after receiving a splash himself. Monday marked the first time the facility has been open this year in the wake of the COVID-19 pandemic. Henson was at the park with her mother, Iesha Henry, while White was accompanied by his mother, Brittany, and brother, Brody, 5.

Brody White, 5, of Murray, braces for a splash from a fountain Monday afternoon at the Owen's Station Spray Park inside Central Park. White was accompanied to the facility by his mother, Brittany, and younger brother, Benson, 2.

Raven Henson, 3, of Murray, dashes through water rising from fountains Monday afternoon at Owen's Station Spray Park inside Central Park while Benson White, 2, of Murray, reacts after receiving a splash himself. Monday marked the first time the facility has been open this year in the wake of the COVID-19 pandemic. Henson was at the park with her mother, Iesha Henry, while White was accompanied by his mother, Brittany, and brother, Brody, 5.

Brody White, 5, of Murray, braces for a splash from a fountain Monday afternoon at the Owen's Station Spray Park inside Central Park. White was accompanied to the facility by his mother, Brittany, and younger brother, Benson, 2.

MURRAY — During the Murray-Calloway County Park Board meeting about two weeks ago, the subject of the Owen’s Station Spray Park in Central Park was discussed.

With the earlier announcement that the Murray-Calloway County Pool, to which the spray park is connected, would be closed the rest of the year because of needed repairs, the fact that the water at the spray park was being activated every day was seen as an afterthought. The main idea was, “just because you see the spray park working, does not mean it’s open. This is just routine to make sure everything is still working.”

A few days later, things changed. New guidelines from Kentucky government officials indicated that facilities, such as spray parks, could reopen before the end of the month, after earlier language indicated this probably would not happen. So, after much effort, Monday came, and Owen’s Station burst to life, welcoming old and young users alike.

“It’s been hard, but now I’m very happy to be out here playing,” said Iesha Henry of Murray, as she watched her daughter, Raven Henson, 3, frolic through the facility Monday afternoon, going from one attraction to another inside the park. “Now, we don’t have to travel anywhere to find a spray park. We can stay here.

“I was very excited when we found out it was opening because I knew (Raven) would enjoy getting to come out here and play with some other kids, because COVID-19 has been very hard for everyone.”

Parks Director Ryan Yates said that he remembers the language from the last park board meeting about the spray park and how the periodic tests were necessary to maintain the system. Monday, he said that may have been hedged a bit.

“Yeah, we wanted to make sure it was still working … because we were praying this day would come,” he said. “And you know what? We need it.

“I’ve been in contact with (Calloway County Health Department Director of Public Health) Amy Ferguson all month and (Murray-Calloway County Parks and Recreation Aquatics Director) Mike Sykes has been talking to one of their inspectors and he works really well with him. They know Mike will do what is needed to maintain this system and he and his staff are well-equipped to handle situations that may come up.

“It was probably (three days) after that meeting that (Kentucky Gov. Andy Beshear) put out some guidelines and started saying that pools and spray parks could open on the 29th (which was Monday) with certain rules. We just can’t have 100 kids out here. We have to restrict our number and basically that means taking your square feet and dividing it by 36 and that tells you exactly how many you can have. So, for us, that’s going to be 20.”

Twenty or 200, it did not seem to matter to people like Brittany White of Murray. She was at Owen’s Station Monday with her sons — Brody, 5, and Benson, 2 — to resume what had become a tradition.

“We normally come here every Monday in the summer,” Brittany said. “We’re missing the pool not being open, but we are really excited to have the splash park open again. I was actually very shocked to hear it was opening. I didn’t anticipate it being open this season. This is something different to get them out of the house and it provides us some normalcy.

“I didn’t care to pay the $2 (per hour) either and I thought that was fine anyway to help the park in any way we can right now.”

Brittany is referring to the small entry fee that has been imposed for visitors for use of the spray park, which usually is free for use with an admission to the pool. Sessions are an hour each and there will be 15-minute breaks between each session. Along with 20 patrons being allowed at a time, parents will be asked to watch from the outside unless they are accompanying a child 3 and under or needing assistance.

There will be no charge for a parent accompanying a child and this will not count as part of the 20 people allowed at a time.

“We hate to do it. It isn’t something we wanted to do, but it’s desperate times right now,” Yates said of the $2-per-hour fee “That’s the biggest adjustment. It’s usually free with your admission, but we also open up the spray park for free as a precursor to the pool opening, as well as keep it open after the pool closes for the year, and that’s also free. So we had to do something.”

Yates said that, since word began circulating that the spray park would open this week, he has been  inundated with phone calls and emails with inquiries about renting the facility for parties. That is available for $50 an hour from 5:30-8:30 p.m. daily.