Employees with the Pella Windows and Doors are pictured outside the facility Tuesday morning after a fire inside a portion of the plant caused an evacuation. No injuries were reported. 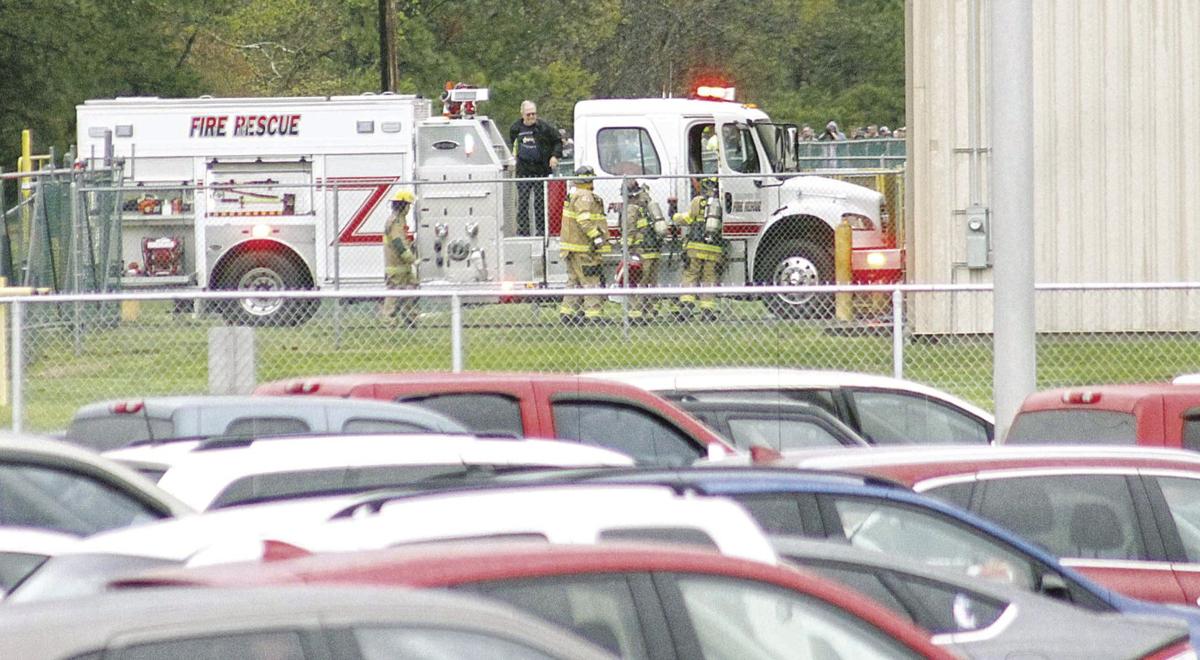 Firefighters with Calloway County Fire-Rescue prepare to enter a portion of the Pella Windows and Doors plant Tuesday morning on Murray's north side. A fire was reported at the plant, causing an evacuation of the facility, but it was quickly contained.

Employees with the Pella Windows and Doors are pictured outside the facility Tuesday morning after a fire inside a portion of the plant caused an evacuation. No injuries were reported.

Firefighters with Calloway County Fire-Rescue prepare to enter a portion of the Pella Windows and Doors plant Tuesday morning on Murray's north side. A fire was reported at the plant, causing an evacuation of the facility, but it was quickly contained.

MURRAY – Major issues were avoided Tuesday morning when a fire occurred inside the Pella Window and Doors plant on Murray’s north side.

Calloway County Emergency Management Director Chesley Thomas said no injuries resulted after the fire was reported at about 10:45 a.m. He said the entire area was evacuated and all workers managed to leave the building without any problems.

“An all clear was given and we had nobody hurt, so they were allowing everybody back into the building,” said Thomas, who arrived at the scene after the fire had been extinguished. He said the fire began in one of the work zones of the plant. “But the sprinkler system did its job.”

Calloway County Fire-Rescue Chief Tommy Morgan said he was the third person from CCFR to arrive on the scene, behind two firefighters who came in their personal vehicles ahead of heavy response units from multiple stations throughout the county. He said that it is believed a Milwaukee battery charger may have developed a short while placed on a shelf, eventually igniting other nearby materials.

“All of the damage was contained to the shelf,” Morgan said. “There also just happened to be a sprinkler head right above it, so when it built up enough heat, that sprinkler came on and pretty much put everything out. We just went in and cleaned everything up a bit and packed everything out. There was still some stuff like paper and cardboard that was still smoldering a little bit, but everything was good, thank goodness.

“It’s been quiet for a long time on the fire side for us, so I was afraid this was going to be a big one, the way (Calloway County Sheriff’s Office dispatch) came out and said they actually had smoke showing.”

Morgan said CCFR has not had an actual building fire since October or November of 2019, but he said it has responded to several brush and woods blazes, as well as wrecks in that time. Even those calls, he said, have become fewer and farther between since mid-March when the COVID-19 pandemic basically brought things to a halt locally.

He said this was very noticeable Tuesday as he responded with his vehicle’s siren and emergency lights activated to Pella.

“I know a lot of people are still going and doing things, but I didn’t have near the trouble you normally do when you go out Fourth Street (in downtown Murray). That’s usually like a madhouse when you’re trying to go out on a call,” Morgan said. “I met like two or three cars. Normally, like I said, it’s a madhouse trying to get up there between meeting people and getting around people. It seems like people are staying in like they should be.”

Morgan said calls to respond to Pella happen every now and then and the vast majority are for false alarms. He said the last time he remembers a call being for an actual fire was in the early 2010s, shortly after he became chief, when an air conditioning unit on top of a warehouse building ignited, with CCFR units  extinguishing that fire.

Morgan said he believes seven or eight CCFR trucks did reach Pella Tuesday, with four or five others that responded, but were called back to their stations after it was determined that enough units were already on the scene. He said 25 to 30 firefighters responded to the call.