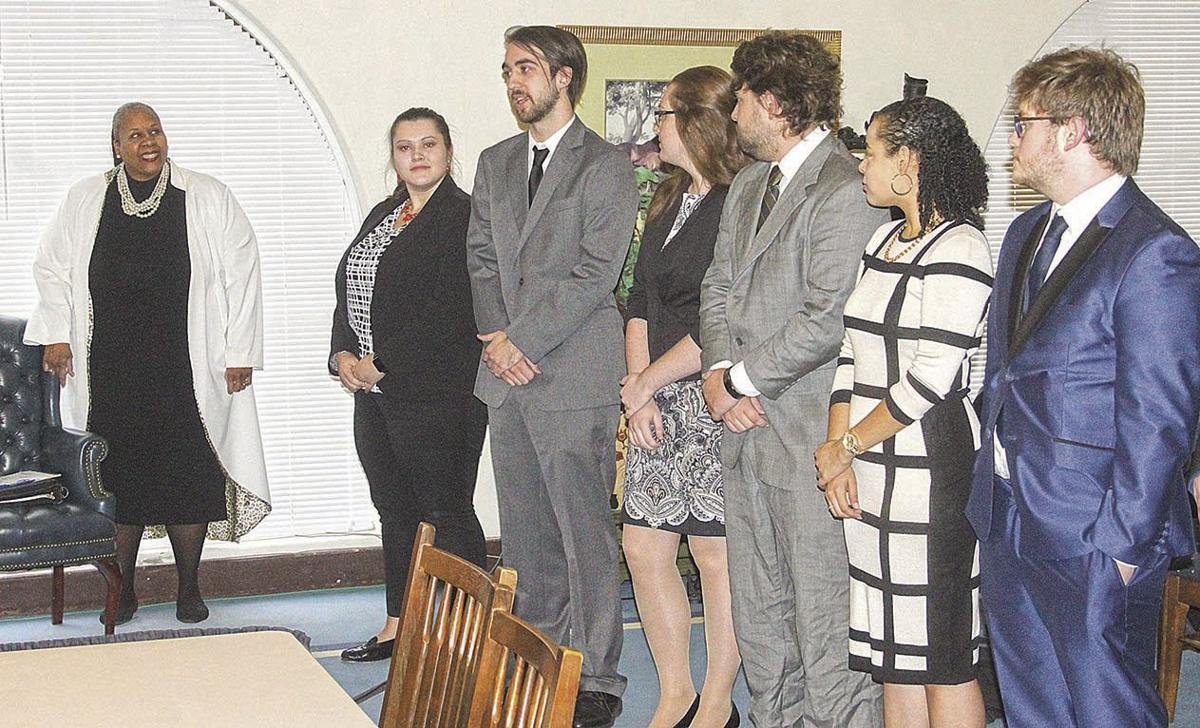 Dr. Crystal Rae Coel, left, smiles as she watches members of the Murray State University Speech and Debate Union introduce themselves Friday morning during a meeting of the university's Board of Regents at Pogue Library. The team was honored for its 2019 national championship. Coel has coached the program for more than 24 years. 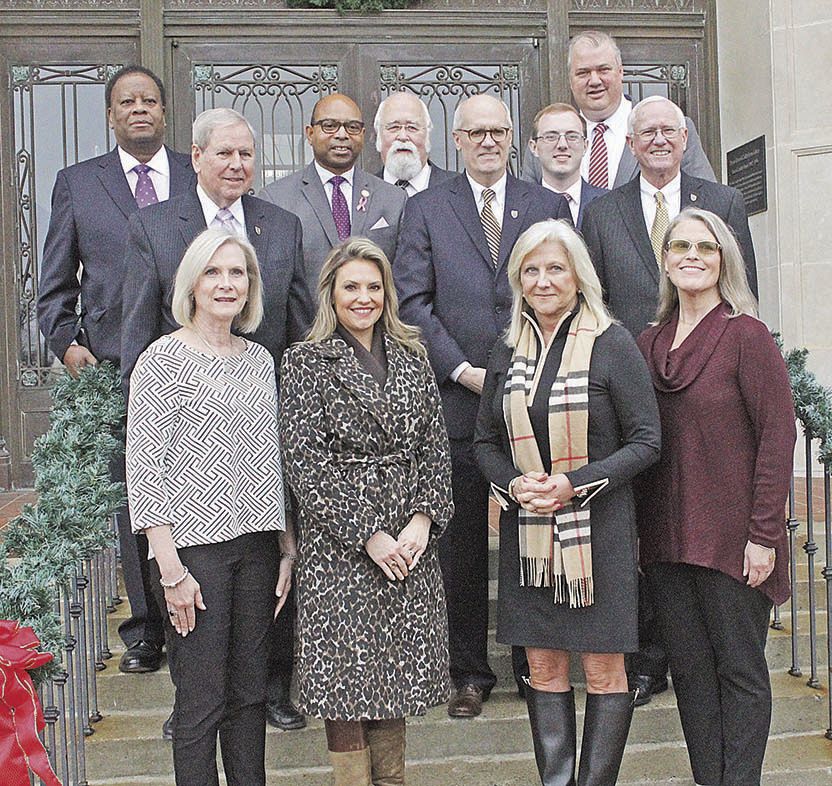 Dr. Crystal Rae Coel, left, smiles as she watches members of the Murray State University Speech and Debate Union introduce themselves Friday morning during a meeting of the university's Board of Regents at Pogue Library. The team was honored for its 2019 national championship. Coel has coached the program for more than 24 years.

MURRAY — To anyone who has attended a meeting of the Murray State University Board of Regents in the last few years, Friday’s gathering was headed toward being one of the more memorable.

Every meeting has always had at least one negative thing, but until the very last part of Friday’s gathering in the Jesse Stuart Room of Pogue Library, there had been nothing but positives. There was a glowing enrollment update, a recognition of the university’s national-championship speech and debate group, new programs discussed and Branding and Marketing talked of winning several awards about which it had just learned.

Then everyone was reminded that the Grinch can strike before Christmas on Friday the 13th, when the Regents were told about Murray State’s pension situation, and how a state group is recommending a massive increase in the university’s obligation for non-hazardous workers in fiscal year 2020. How big?

Nearly $5.4 million … on top of an expected requirement of more than $6.5 million for fiscal year 2019. University Vice President of Finance and Administrative Services Jackie Dudley was the first to learn of this in an email the Kentucky Employees Retirement System sent her more than a week ago, where KERS said that, unless something changes, Murray State will be responsible for 93.01 percent of the KERS pension obligation.

“And you have to remember that the $6 million was for our obligation at 49 percent. So when you add this up, that’s about an 88 percent increase,” Dudley said.

This also helps explain why the university is once again looking at outsourcing one of the services it oversees on the campus, just as it did with dining and student health services earlier. Now, it is facilities management, which employs 123 people, out of a possible 181 positions for custodial, grounds, maintenance and administrative positions at such places as the Curris Center, Baurenfeind Wellness Center, CFSB Center and housing.

Over the past week, four candidates to obtain the contract for running facilities management have been on campus and been part of forums with students, faculty and staff on the campus. Friday, Murray State President Dr. Bob Jackson was given authority by the Regents to sign a contract with one of the firms not to exceed $5,956,745 for both custodial and grounds management that would start on July 1, 2020 and continue through June 30, 2021.

Jackson said Friday that he has trouble coming to grips with how Murray State’s pension obligation has exploded.

“Just to think, it was only three years ago that it was 10 percent … 10 percent!” Jackson remarked.

The motion to grant Jackson that authority was not unanimous. Faculty Regent Dr. Melony Shemberger cast the lone no vote.

“One thing I want to bring up is tuition reimbursements, and in listening to questions from the employees, that was one of their concerns,” Shemberger said of how employees have been able to receive that assistance to help finance their children’s education at Murray State. “I come from institutions where outsourcing is king and I don’t have the warm and fuzzies about this. I don’t think anybody does.

“But just to give you the narratives, I’ve heard these employees and they are concerned. They’re worried, and I just wonder as things get worse with the pension, if this is going to continue to be the approach, rather than it being a last-ditch effort. But I just wanted to express that the employees are worried, and faculty too are concerned about this.”

“We all should be,” Jackson said. “We’re in an awkward spot. I mean, we’re talking about 93 percent pension rates today. Next year, it could go to 107 or more. It’s tough because the only other option we have at this point, at this institution, is continued budget cutting, and that’s not going to get us to where we need to go.”

Jackson and Regent Jerry Rhoads, both of whom are former Kentucky state senators, said that, from what they are hearing out of Frankfort, legislators probably will not deal with pensions in the upcoming 2020 session. This past year, legislators instituted  a freeze, keeping the pension obligation for state public universities at about 49 percent.

While Jackson received authority to sign a contract Friday, it is not yet known with whom that will happen.

The pension discussion took the air out of earlier positive news from University Vice President of Student Affairs Dr. Don Robertson on an issue that Murray State has fought to turn around. Robertson had the final numbers on enrollment for the fall 2019 semester and it showed that the university has 9,569 students, compared to 9,466 this time last year.

That is an increase of 1.09 percent. Broken down, that included a nearly 8 percent increase in the number of first-time freshmen (1,421). Robertson also expressed surprise that the enrollment included a very slight increase, but an increase nonetheless, in international students.

“You get an increase right now with international students of any kind and that’s really something,” Robertson said, adding that the university’s recruitment efforts, which intensified greatly last year, have become even more so this year. He said the Road Scholars program, seen by many as a major reason for the increased enrollment – as it puts university officials in local high schools – has resulted in about 600 visits so far, compared to 400 last year.

Murray State’s regional campuses are also seeing increased enrollment, by an average of 6 percent. The biggest splash has been at Murray State’s Henderson campus, which saw a whopping 26 percent increase.

Dr. Crystal Rae Coel was proud to be part of the morning session of Friday’s meeting, as it gave her the chance to display her Racers Speech and Debate Union, 2019 national speech and debate champions.

“It is my privilege my honor, to present to you, the state, regional, national award-winning Speech and Debate Union. I introduce to you … the Union!” she said before her team members marched in and formed a long line in front of the Regents, to a hearty ovation from everyone in the room. She has coached this program the past 24 1/2 years.

The team earned its accolades at the 2019 Pi Kappa Delta National Speech and Debate Tournament on the campus of Hofstra University in Hempstead, New York. Murray State bested a field of 75 colleges and universities in taking the title.

“We are all about giving back and we want to thank our donors, alumni, the Office of Development that works with us to fund our travels,” Coel said, noting that the 2020 event is in San Diego. “So, I’m putting it out there that funding is always welcome.”

The Racers Give campaign to finance need-based scholarships is continuing through Dec. 31. On Friday, university Director of Development Tina Bernot said the last check she made before Friday indicated that this drive, coinciding with Jackson’s commitment to have all money normally used for an presidential investiture ceremony given to funding such scholarships, had raised about $180,000.