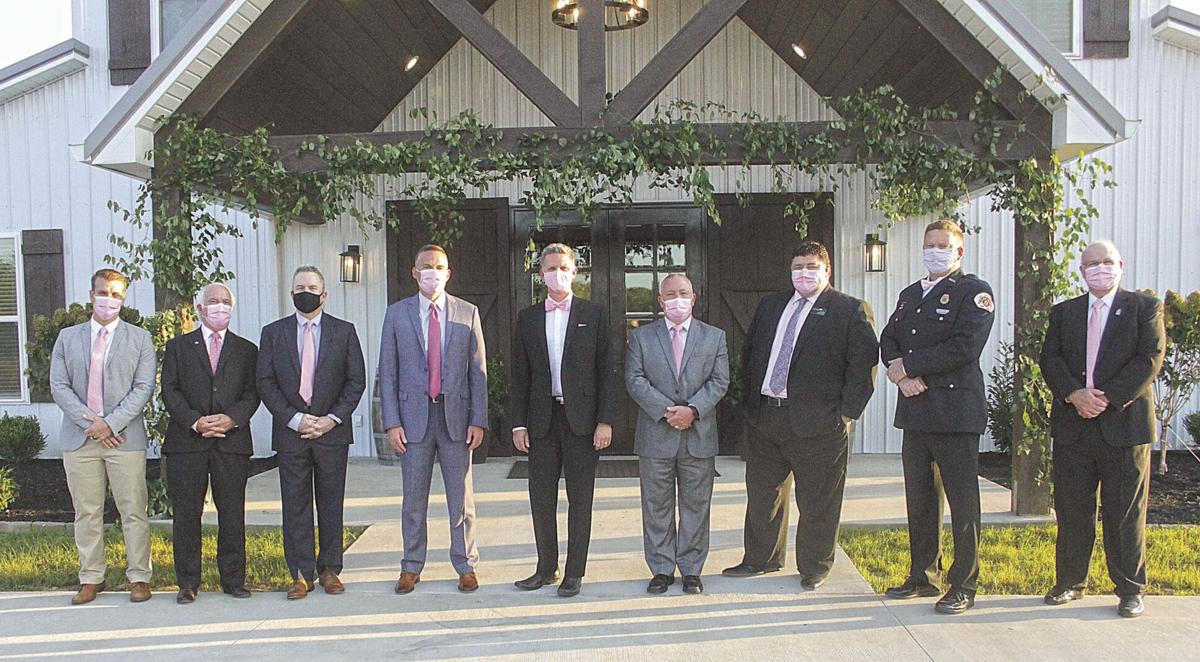 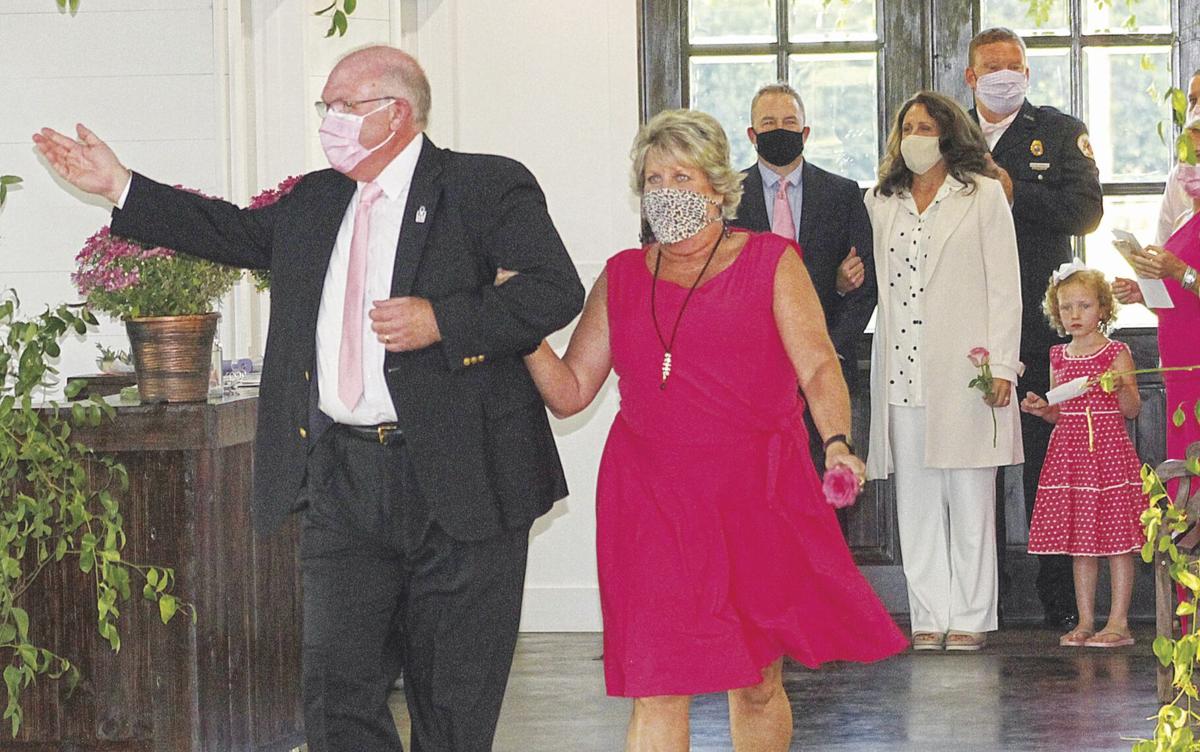 Chris Scott acknowledges the applause for he and his wife, Kimberly, a breast cancer survivor, as they enter the Barn at White Oaks venue Monday for the Real Men Wear Pink reveal party. 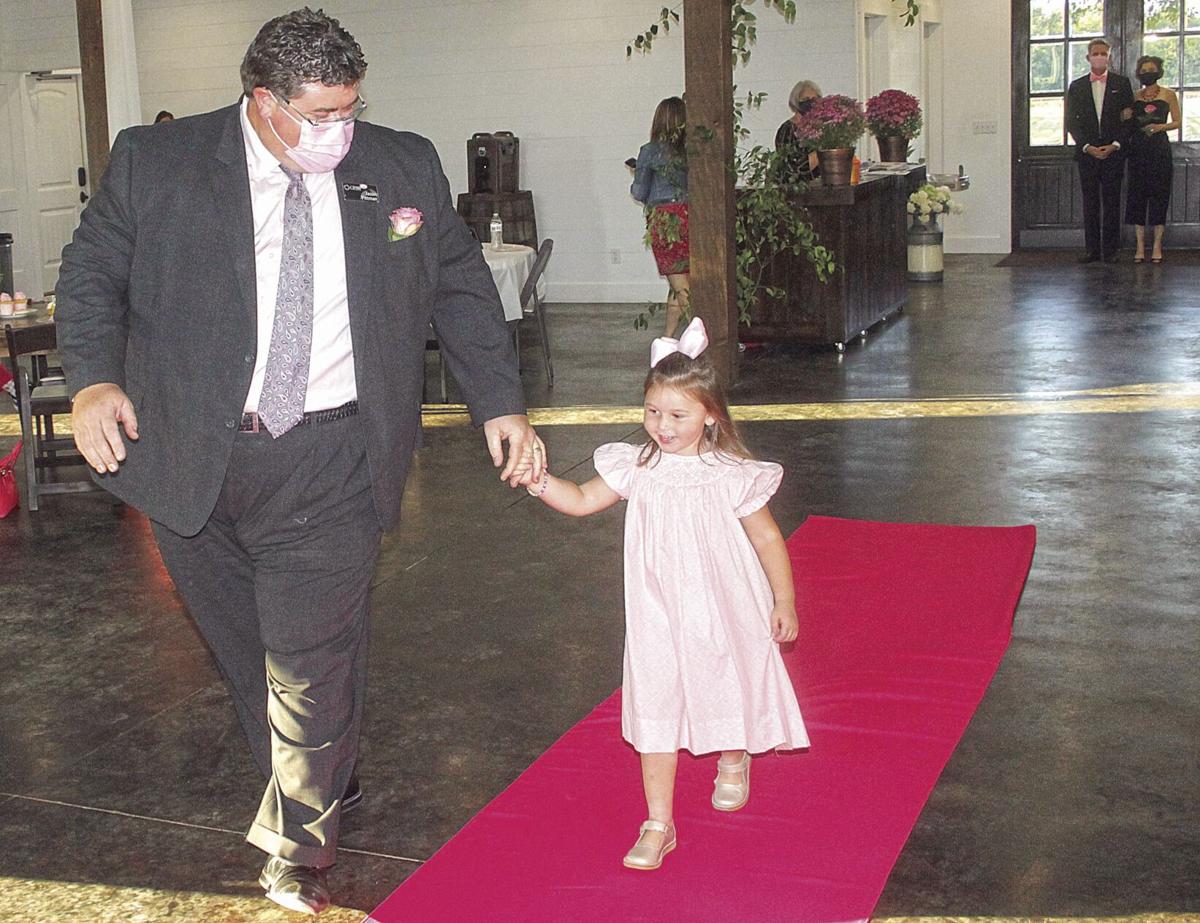 Jason Pittman holds hands with his daughter, Harper Jane, Monday afternoon as they walk the pink carpet for the Real Men Wear Pink reveal party at the Barn at White Oaks.

Chris Scott acknowledges the applause for he and his wife, Kimberly, a breast cancer survivor, as they enter the Barn at White Oaks venue Monday for the Real Men Wear Pink reveal party.

Jason Pittman holds hands with his daughter, Harper Jane, Monday afternoon as they walk the pink carpet for the Real Men Wear Pink reveal party at the Barn at White Oaks.

MURRAY — Even though October is still several days away, the time for the 2020 Real Men Wear Pink participants to begin showing their threads arrived Monday.

That was when the nine men who will wear this color so synonymous with the ongoing fight against breast cancer were officially unveiled during a reveal party at The Barn at White Oaks. Those men — Jeff Gentry; Matt McMahon; Nick Calhoon; Robert Hughes; Chris Scott; Randy Taylor; Justin Franklin; Jason Pittman and Todd Terry — will spend the month of October raising money that will go to the research, treatment and support of breast cancer and its patients.

Tim Stark was the emcee for Monday’s kickoff and is an alum of this activity. He was part of the first Real Men Wear Pink campaign in Calloway County in 2018 and told this year’s class that there is much accountability involved when it comes to being part of this group.

“The challenge for this group is ‘Are you guys in?’ Alright? Are you guys in? Are you committed?” Stark said, challenging the 2020 group. “I remember when (Real Men Wear Pink 2018-19 Chair) Martha Andrus told me (about the idea) and said that the goal was $2,500 raised for each participant, and I thought to myself, ‘That’s a lot of money to raise in a short time.’

It is. It’s a big number. But the dollar you raise might be the dollar that finds the cure, so let’s do all we can.”

Motivation does not seem to be a problem for this year’s group, though. All of them have either family members that have faced this disease or friends who have fought it. Some have won, others have lost.

“I’m proud to represent and raise awareness for people who have gone through extraordinary circumstances,” said Terry, who is a music teacher at East Calloway Elementary School. “I’m here for my grandmother who survived breast cancer and I’m also here for a dear friend, a drama teacher colleague of mine, who was not so lucky with that five years ago.”

McMahon is one of the more high-profile members of this year’s group as he holds the distinction of being the head coach of the Murray State Racers men’s basketball team. He also has a personal stake in the matter.

“My grandmother beat breast cancer, I’ve had multiple friends face it. I’ve got a classmate of mine from high school fighting breast cancer right now and we’ve had multiple people from within our Racer family who are either fighting it or have beaten it, so obviously this is very important and I’m proud to be part of this,” McMahon said.

“I’m just thankful to be part of this group of leaders in our community and I’m hoping to raise awareness and money for those fighting breast cancer. It’s a great opportunity to make a positive impact on our community and hopefully save lives.”

This year’s campaign already seems to have started quite strong. It was announced at Monday’s event that the group  has raised $6,000 so far.

In its short time of existence, the Calloway County campaign has already developed a strong reputation, having far surpassed its financial goal in each of its first two years. In 2018, the goal was set at $25,000 and the end result was more than $30,000 being raised, with City of Murray Police Chief Jeff Liles leading that charge with more than $5,100.

Last year’s group moved the bar higher, taking a goal of $30,000 and ending with a total of more than $35,000, with Jeremy Grogan of the J.H Churchill Funeral Home pacing that effort with more than $6,400.

So far, Hughes, a local physician, has set the tone by raising more than $2,800.

Stark urged the participants to be creative in their methods during the coming weeks and to have fun. He also told them to remember one last thing.

“Remember you live in Murray and Calloway County, where people have big hearts and are always willing to donate to a cause,” he said.