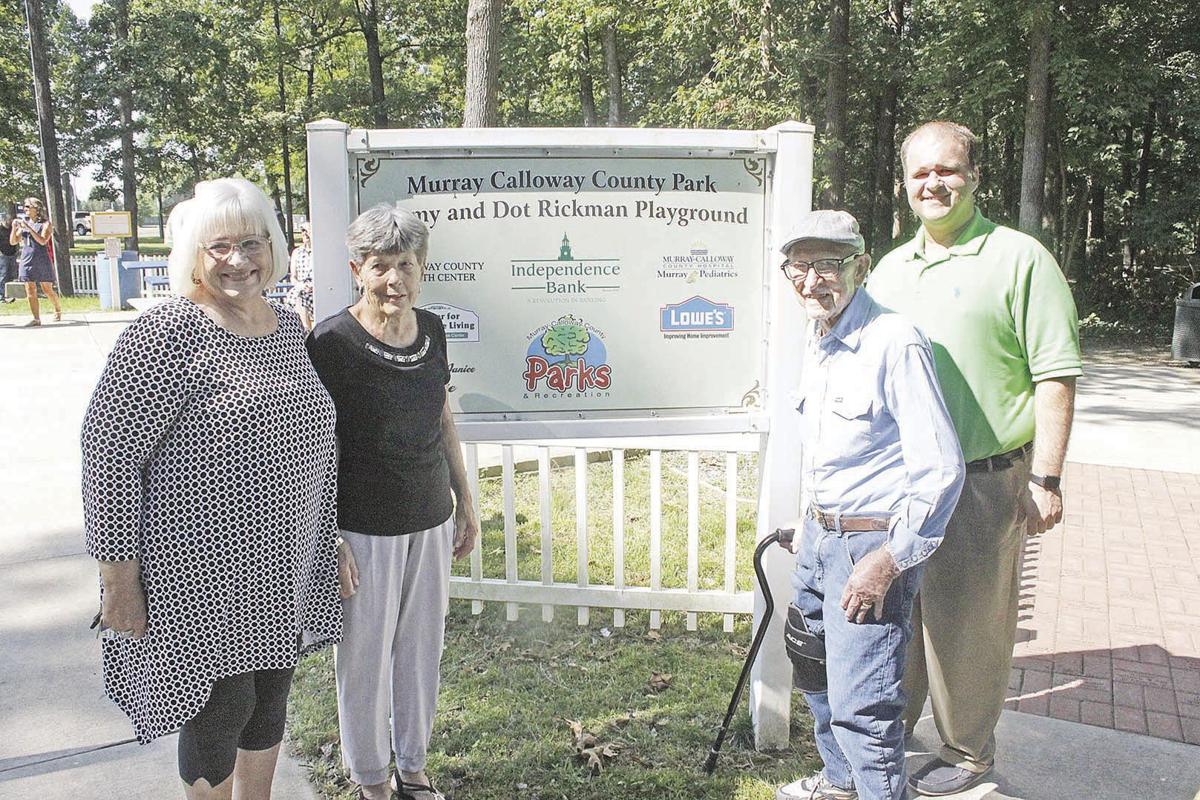 This past fall at a dedication ceremony, Dot and Jimmy Rickman are pictured in front of the “their” playground at the Murray-Calloway County Park with myself and Jason Lovett. 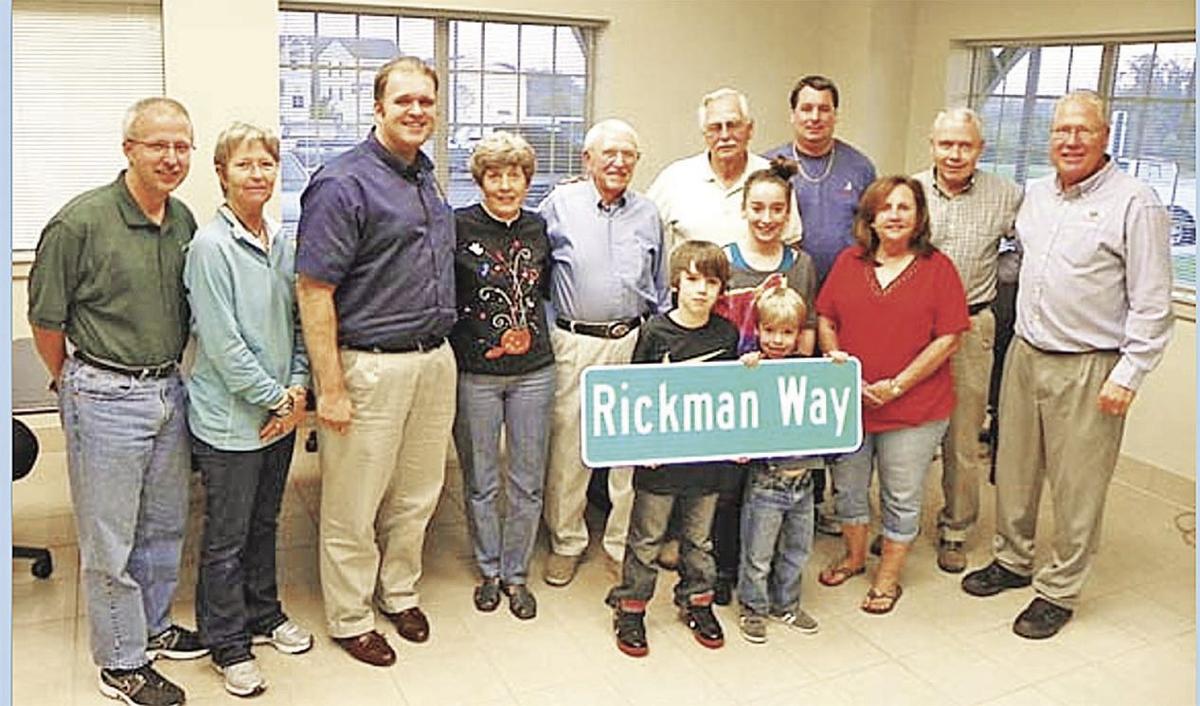 This past fall at a dedication ceremony, Dot and Jimmy Rickman are pictured in front of the “their” playground at the Murray-Calloway County Park with myself and Jason Lovett.

MURRAY – The Murray community lost a true friend and benefactor Monday in the death of Jimmy Rickman.

Jimmy died at his home, where he wished to be, with the support of Hospice and his wife Dot. At 93, heart issues and other health-related problems finally took its toll on a strong, determined man who probably would not have been with us as long as he was had it not been for that determination and strength. Jimmy said he was ready when the Lord called him. He would tell me he was thankful every day when he woke up, but he was ready when the Lord wanted him. He will very much be missed by his family, but also by all those whose lives Jimmy touched over the years.

It is impossible to honor Jimmy without mentioning the many philanthropic contributions he made to make Murray and Calloway County a better place to live.

Jimmy’s love of children and his desire to see them have facilities that brought them joy was his motivation behind supporting the Murray-Calloway County Park. Ryan Yates, park director since 2017, had the following to say about his friend:

“When I became park director, one of the first names I heard was Jimmy Rickman,” Yates said. “I remember taking my first tour of the park and at the Bee Creek Soccer Complex I saw the street name ‘Rickman Way.’ I remember meeting Jimmy for the first time at a Park Appreciation Banquet. I saw a frail, but good looking man with a belt buckle as big as WWE or a UFC title belt! When I shook his hand and introduced myself, the look in his eyes made me comfortable and welcomed. We shared a short conversation that grew into a wonderful relationship. Any time I talked with Jimmy, he always mentioned his love for this community and children.

“Rickman Way personifies the man that he was – hard-working, helping to better the lives of others, living humbly and always putting God first. His legacy will never die and his presence will be really missed.

“When the concession stand at Bee Creek burned in 2012, Jimmy stepped up with a donation of $40,000 to help rebuild and made it possible to turn a tragedy into a triumph. In 2018, we were in the midst of building the ADA Playground when Jimmy and Dot learned of this project and they were eager to become involved. Jimmy donated $25,000 to ensure the project was finished and later donated another $30,000 to secure the playground’s future, which is now known as the Jimmy and Dot Rickman Playground.

“Later, Jimmy gave $100,000 to the park for the renovation of one of the baseball fields in the four-plex at Central Park. This project is currently underway and will enable viewing areas for those with disabilities and will be complete with new backstops, bleachers and a brick garden where people can place a brick in honor of someone. Jimmy helped the Murray-Calloway County Park become accessible to all.”

Because of Jimmy’s love of his Lord, he supported several churches in the community for many years. Another interest he grew to care about was the Playhouse in the Park. When he learned they had purchased a building recently, he immediately asked to make a donation and I put him in touch with Terry and Judi Little. Not only did he make a contribution at that time, he recently made another one, and in addition, he and the Littles became good friends during the process. You couldn’t meet Jimmy Rickman without becoming one of his friends.

When Jimmy learned of a need in this community, he was one of the first to step up and offer support. When he heard about the new Cancer Center at the Murray-Calloway County Hospital, he recognized the need for this facility and made a donation.

“My life was blessed the day that Jimmy and Dot Rickman entered my office and wanted to be involved with the Anna Mae Owen Residential Hospice House,” said Keith Travis, chief philanthropy officer at the Murray-Calloway County Hospital. “From the beginning, they were instrumental in providing the funds for the hospital to hire a full time chaplain to serve the spiritual needs of our patients.

“Most recently, they provided generous support to the Enduring Hope Campaign for a new Regional Cancer Center. I was so impressed with the work ethic of Jimmy and his commitment to quality. His story about laying brick with his left hand after he broke his right hand will live with me forever. He was a person who wanted to give back more than he received, and someone who lived modestly, but wanted the less fortunate to be provided for in his community. He was part of the Greatest Generation and someone who will be truly missed in Murray.”

The list could go on and on as to the support Jimmy gave many organizations in Murray. He wanted no recognition; he just wanted to help.

On a personal note, Jimmy had a lot of friends, especially for someone who lived to be his age. Usually, people who live into their 90s have lost most of their family and friends, but in Jimmy’s case, he had so many friends that it was not unusual on any given day for him to have visitors at his home. I was one of those visitors.

In 2017, Dot called me and told me she thought Jimmy would be a good subject for a story for my Saturday Community Lifestyles page. I agreed and I spent many hours with Jimmy as he told his story.

I had known Jimmy for many years, and in fact, he had built an addition to my house back in the 1980s. But our friendship was renewed during our visits and I became a regular visitor to his home. If I didn’t drop by when he and Dot deemed it necessary, I would receive a phone call asking where I had been. I tried my best to avoid those phone calls and to visit regularly. I loved my time with Jimmy and Dot and I never left their house without Jimmy requiring a hug and kiss on the cheek, and he always told me he loved me. Dot said Jimmy told her I always made him laugh, and for that, I am grateful. I loved nothing more than to see a smile on his face.

Jimmy loved his work and he loved building a quality home for families to enjoy living. He never meant to get into the subdivision development, but he found himself in that situation and made the most of it. He never worked for the money, he worked for the joy of working and seeing a finished product he could be proud of.

He trained many carpenters and brick layers in his lifetime. I asked him if he was ever upset any time someone he had trained left to go out on his own. Jimmy replied he was not upset. He said he had trained them to be able to make a living for themselves and he was proud to be a part of helping them get started.

Someone who grew up with Jimmy as a “father figure” is Paul Garland, a local developer.

“My father died when I was 14 and I quit school and went a little wild,” said Paul. “Jimmy kind of took me under his wing and became a father figure. He gave me a lot of attention and was very good to me.”

Paul said Jimmy was responsible for helping him get started financially.

“I always wanted to trade and I had gotten into the car business,” Paul said. “Jimmy would loan me the money to buy cars and when I sold them, I would pay him back. He never asked any questions and never counted to see that I had paid him back the right amount. He always trusted me. In fact, Jimmy offered to loan me quite a bit of money when I was buying cars from Texas. As it turned out, he agreed to let me use the money and my wife and I moved to Houston for the car business. He never asked me to sign anything. It takes a true friend to do something like that.”

He and Paul also loved riding horses together.

“Jimmy would buy an expensive horse and he wanted me to show him,” Paul said. “We won a bunch of trophies over the years and recently when I was visiting him, he gathered up all the horse trophies and gave them to me.”

Paul said he was asked to be a pallbearer for Jimmy’s funeral and he said he felt very honored because he was younger than most of Jimmy’s friends. But I know from the many conversations I had with Jimmy, that he was very fond of Paul.

Jimmy was the next to youngest of seven children, and he grew up watching his father and brothers work. He wasn’t fond of school and all he ever wanted to do was work. He quit school after the eighth grade and began working and didn’t stop until he was 90, except for the two years he served in the U.S. Navy.

One of the things that Jimmy was proud of was his oral history he gave of his experience in World War II at the Discovery Park of America in Union City, Tennessee. And one of Jimmy’s fondest memories, as he told me several times, was spending time with his three great-grandchildren building a fort. He had a chance to teach them how to build something and that meant the world to him.

I will miss my friend, as I am sure many others will also. He held a very special place in my heart and I will never forget our friendship and how much he showed he cared for me and so many others. He was a very special man and I was proud to call him my friend. There will be a dedication of a new ballpark in Jimmy’s name at the park this spring and even though he won’t be there to see the new field, I am sure he will be looking down and smiling.