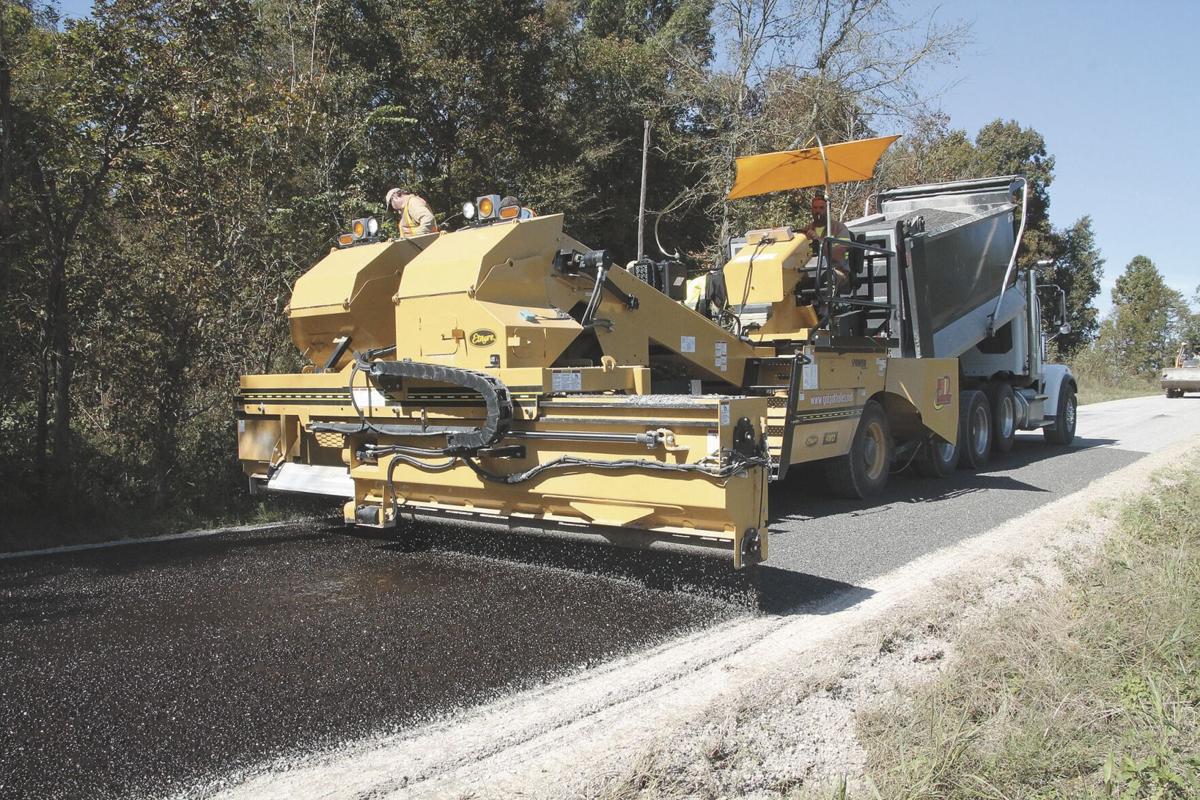 A crew drops chip seal on top of a fresh layer of wet rubber-modified asphalt on Samuel Drive in northwestern Calloway County Wednesday afternoon. The work is being done by the county with a state grant as part of a study to compare the wear and tear between Samuel Drive and Swift Road, which was paved with regular asphalt. 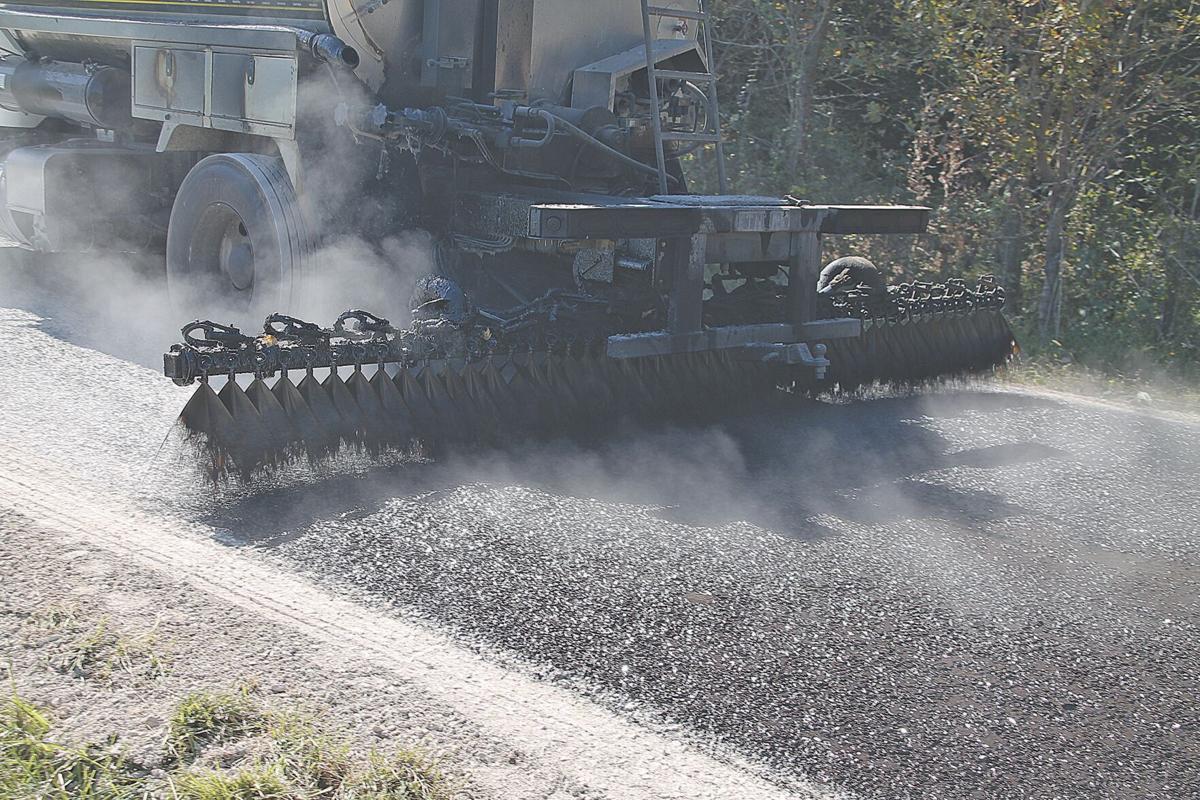 Streams of rubber-modified asphalt are sprayed onto Samuel Drive.

A crew drops chip seal on top of a fresh layer of wet rubber-modified asphalt on Samuel Drive in northwestern Calloway County Wednesday afternoon. The work is being done by the county with a state grant as part of a study to compare the wear and tear between Samuel Drive and Swift Road, which was paved with regular asphalt.

Streams of rubber-modified asphalt are sprayed onto Samuel Drive.

KIRKSEY — At about 7 a.m. Wednesday, Samuel Drive in northwestern Calloway County began its role as part of what could be said to be a science experiment.

A Tennessee firm began laying a new type of asphalt made from recycled tires to take Samuel Drive  from being a gravel road the past few years to having a paved surface. The experiment is that this is part of a statewide study to see if rubberized surfaces last longer than common asphalt surfaces when it comes to requiring repairs from wear and tear.

One person who seems to enjoy these types of projects is Calloway County District 4 Magistrate Paul Rister, whose job included conducting numerous experiments when he was a fish biologies specialist with the Kentucky Department of Fish and Wildlife Resources. He said he went to the site Wednesday to see the experiment for himself, and ask questions.

“I came from a research environment, so I love to do studies and compare things and find a better way to do something,” said Rister, who, after being informed earlier this year by Calloway County Deputy Judge-Executive Gina Winchester that this was available, applied for the county to receive a portion of more than $480,000 the Kentucky Energy and Environment Cabinet made available to be part of the study. Calloway is one of six counties chosen, along with Hardin, Simpson, McLean, Butler and Green counties.

Calloway received $56,100 for its participation. At the same time, a stretch of Swift Road that has also been gravel the past few years is receiving regular asphalt application that is more oil based and is known as “chip seal.”

“Basically, these are county roads that are in bad shape, so they were torn up a few years ago, (workers) ripped up the chip seal and put in rock, rather than just wasting money on any hard surface.,” Rister said, discussing how the experimental surface is applied. “They put down a layer that looks like the black oil you would see in a regular asphalt project, but it’s not oil. It’s a rubberized mix that they spray on the road.

“I was talking with Josh Coley of Paving Restoration Inc. (of Milan, Tennessee) and he said that  they’ve done a few of these projects. Now, they’ve not been on the ground long enough to make any conclusions, but he said he likes it better than the oil-base material because he said that it sets up faster. It cures quicker.”

Calloway County Judge-Executive Kenny Imes said he is happy the county was included in the study.

“Now, like the other counties around the state, we’re not going to know the results on this for awhile,” Imes said. “However, this is something that is supposedly going to give us a chance to have a road last a little longer. It is a little bit more expensive ($5 a ton more, to be exact) than regular asphalt, but if you’re able to get two or three more years of use from a road, that makes it worth it and we’re excited about the prospects of that.

“That’s the one thing about being chosen for this. You get to see this for yourself, plus, for the state, and from what I’ve seen, what works here may not work well in eastern Kentucky. Plus, and I tell this to just about everybody, we have 720 miles of roads that we take care of in Calloway County and that is the third-longest system in the state, so we can’t just go out and take care of everything at the same time. If we can find something that’s going to last longer, that is going to make it much better for us.”

Rister again reverted to his 30-plus years as a fisheries biologist with KDFWR in discussing another aspect of this project — environmental. He said use of recycled tires for the road surface means tires that could have found their way into Kentucky Lake or roadside ditches are taken out of that equation.

“People do like to throw tires into the lake and, of course, we frowned on that because of the oil that leaks out of them,” he said. “This way, tires are not going in the lake, they’re out of ditches, and that’s good also because these old tires also hold water and that can attract mosquitoes.

“That helps answer a question. What in the world do we do with all of these tires that are removed from lakes and creeks and ditches? If (the rubberized road surface) holds up like regular asphalt, it may be the thing of the future. It’s a green idea and it helps the environment because it gets rid of these tires.”

Calloway County Road Supervisor Richard Edmonds said he is taking a wait-and-see approach with this program because it will take some time to determine if the rubberized surface is worth using full-time in the county. However, he said if the evidence does favor the rubberized surface, he said he will be glad to use it.

“That’s my bottom line. Does it work?” Edmonds said.”It’s  always been a cost/reward thing with me. If it costs me x amount of dollars but I can get three more good years of good road, then absolutely! If it doesn’t, I don’t need that.”

One thing Edmonds said he is seeing immediately from this operation is that residents of the area are happy. He said this was particularly the case for at least two people who live on Swift, which is receiving the old chip seal treatment.

“They were thrilled to death. Yes, they were happy campers,” Edmonds said of his meetings with those residents Wednesday morning. “One of them came up to me and said, ‘Oh! We appreciate what you did! We were getting so tired of driving on that gravel road.’ I said, ‘Well, you don’t have to thank me. I’m just doing my job.

“Now this is not even the road that’s having the new stuff put on it, but they didn’t care. They’re just happy to have a good road again.”