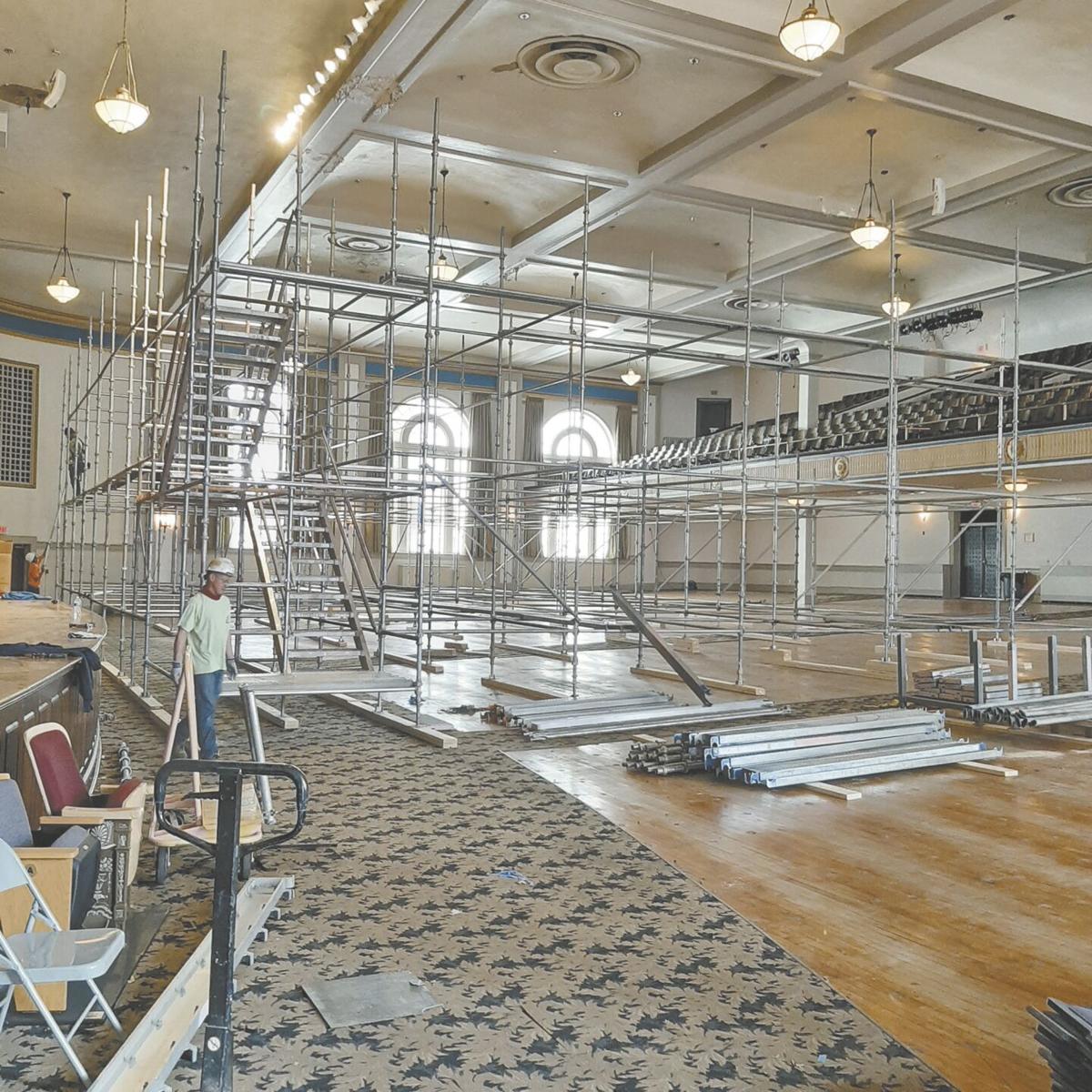 Scaffolding can be seen in Lovett Auditorium earlier this year as major renovations are underway. The building is receiving major upgrades to its HVAC system at the same time the seats and flooring are replaced on the first level. 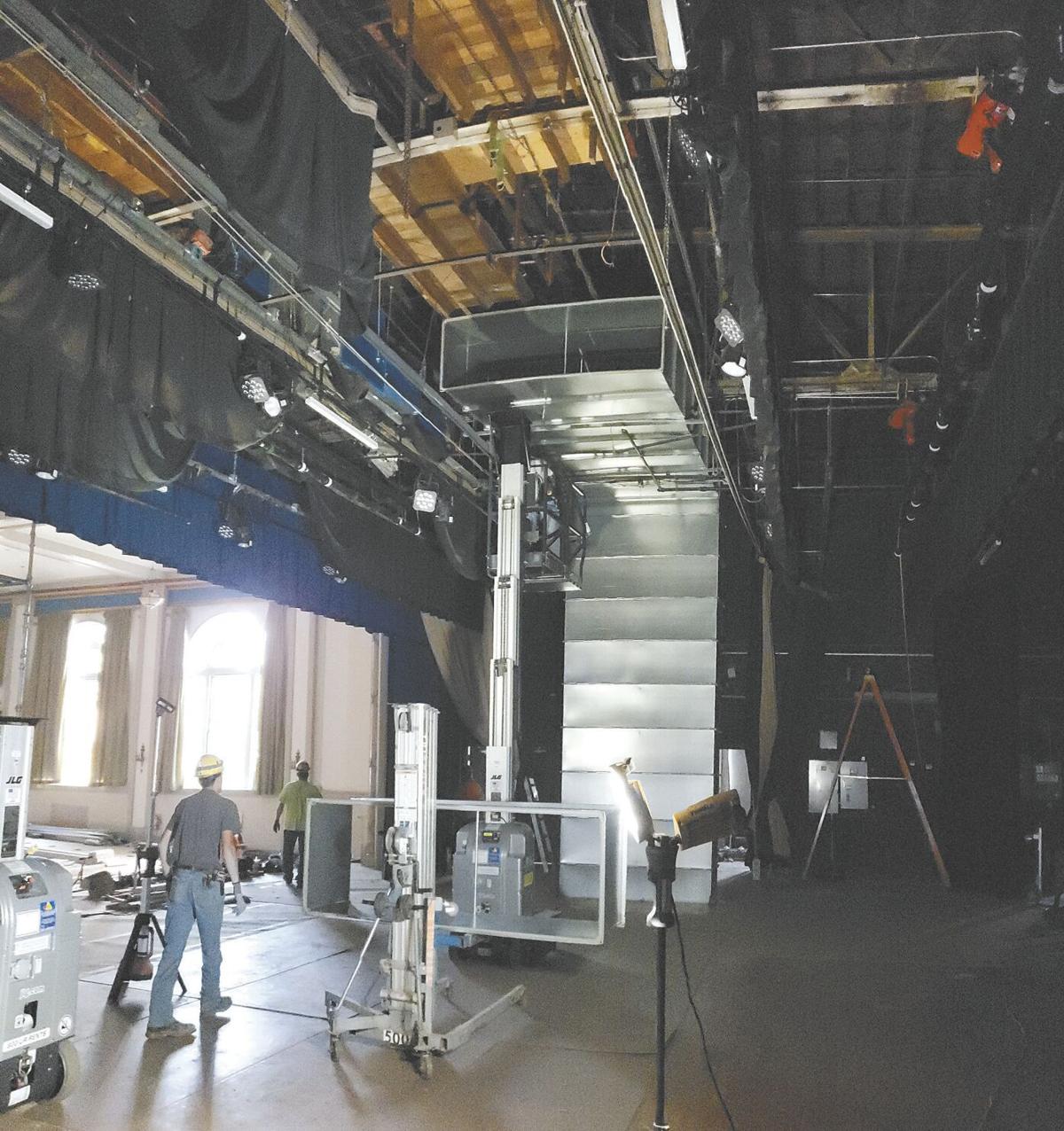 The old air handlers seen here on the Lovett Auditorium stage were too loud to operate during performances, so the building had to be over-cooled before each event. The new air handlers will now be in the basement to cut out the noise disruption and are just a couple of components of the HVAC system that are getting modern upgrades.

Scaffolding can be seen in Lovett Auditorium earlier this year as major renovations are underway. The building is receiving major upgrades to its HVAC system at the same time the seats and flooring are replaced on the first level.

The old air handlers seen here on the Lovett Auditorium stage were too loud to operate during performances, so the building had to be over-cooled before each event. The new air handlers will now be in the basement to cut out the noise disruption and are just a couple of components of the HVAC system that are getting modern upgrades.

MURRAY – Murray State University’s historic Lovett Auditorium has been undergoing major renovations to its HVAC system for the last few months and is about to enter the second phase of the project before hopefully reopening sometime next spring.

A recent news release described the facility as one of the most iconic buildings on campus. It began construction in 1926 after the Murray State Board of Regents approved the contract for the auditorium, and it was completed in 1928. The total cost of the building was $145,462, and at the time of construction, it was the largest college auditorium in Kentucky, with a stage large enough to host Murray State basketball games.

In a Murray State Digital Media Services-produced video posted on the university’s official YouTube page, President Bob Jackson talked about the facility’s long legacy and why the renovations will serve the university and the community well.

“Lovett Auditorium is vitally important to Murray State University and has been since our beginning,”  Jackson said. “Laurine Wells Lovett, a member of Murray State University’s first Board of Regents and daughter of Murray State Founder Rainey T. Wells, helped plan and envision a state-of-the-art performing arts and multi-purpose auditorium. … This university needs an excellent performing arts facility, and Lovett Auditorium will serve that purpose in the months and years to come once we complete the work we’re doing currently.”

Jason Youngblood, director of facilities management, said the project is divided into two phases, and also includes replacing the seats and flooring on the main level of the auditorium. Angela Lampe, associate director of facilities design and construction, said the original wooden balcony seats are being left as they are because they are not used as much as the first level.

Youngblood said Phase I mostly consists of HVAC upgrades, but also includes new carpet, the refinished floor and repairs to a large amount of plaster damage on the ceiling, as well as repainting the ceiling. Phase I began last fall, he said.

“We were in design, and during the summer of 2020, we made the decision to shut the building down and get some work done to figure out how we can fix the HVAC problem,” Youngblood said. “We had a lot of moisture issues in here, and it was causing the building to deteriorate. We started design and the contract started right after the first of the year, so we’ve working on it since January or February. They’re at substantial completion now, or real close to it, and then we’re hoping to kick off Phase II later this month.”

Phase II, which Youngblood said is expected to go out for bid in a couple of weeks, will include the HVAC work for the balcony and installing the new stage curtains and new windows for exterior doors. Lampe said that would exclude the large windows in the auditorium hall itself.

“It might not be new doors; it might just be hardware on the doors,” Lampe added. “(The contractor) said they might be able to salvage the existing doors and (add the) hardware to make them airtight.”

Youngblood said completion for the last phase of the project isn’t expected until July 2022, but he is hoping to have the auditorium opened before then. After that, the duct work in the balcony will still need to be installed, he said.

In the YouTube video, Project Manager Cole Riley with Pinnacle explained that pipes in the basement would connect to more than 500 floor registers, which will circulate air throughout the auditorium. Lampe said that since the seats had to be removed for the HVAC work anyway, it was the perfect time to replace those as well. She said the new seats will be larger than the original ones, and the original end plates with cast-iron letter “M” emblems will be visible at the end of each row.

Lampe said the plates were covered with paint over the years, but most of them have been salvaged and refurbished and will be mounted onto the new seats. The timeline for installing the new seats is somewhat uncertain right now because – as with every construction project these days – supply chain problems related to the COVID-19 pandemic have slowed things down.

“The seating is supposed to arrive toward the end of November,” Lampe said. “Of course, everything keeps getting pushed back on all fronts, but we would want the bulk of this work underneath the balcony to be done before the seats go in.”

“We may work on getting the seats down front and about halfway back and then (contractors) continue to work in the back before we install those seats,” Youngblood added. “Once we get the duct work in for the balcony, we can put the rest of the seats in. We should be able to open up the auditorium for events while we do windows throughout because they’re going to take a while.”

Youngblood said the old air handlers were located on the stage and were extremely noisy, so they could not be turned on during a performance. Instead, the building had to be over-cooled before a performance so audiences could be comfortable. That led to a lot of fluctuation in temperature, but the new air handlers will be in the basement so they can run any time, he said.

“The main point of a lot of this was just to improve our HVAC and air quality, but this also gets us off our central steam (system),” Youngblood said. “We installed two new boilers, and they feed the hot water in. We’re still on our central chill water loop, so that’s how we cool the building, but we’ll heat it through the two new hot water boilers instead of our central steam.”

Youngblood said he thought the central steam system was original to the building. It used to be powered by a coal-fired plant, but the central plant steam distribution system was upgraded around the early-to-mid-1960s, he said. He said central steam isn’t necessarily inefficient, but it is very costly to maintain and it is less efficient than having individual building boilers.

“Hot water boilers have become so efficient that it almost makes central steam inefficient (by comparison),” Youngblood said. “There are benefits to having central steam, but it’s just not really for our buildings, and that’s what we’re trying to phase out over time in all of our buildings.”

“We’re in design now for Wrather, and we just started design for Carr and Racer,” Youngblood said. “We’re planning to maybe start something in January for Wrather, and then Carr and Racer shortly  after the first of the year. Most of Carr and Racer is HVAC-related, but at Wrather, there will be some auditorium upgrades too. We’ll reupholster the seats, put new carpet down, paint and refresh the auditorium. It’s still a heavy mechanical (project with) heating and electrical work, but there are some other improvements planned.”

The Board of Regents voted in June to approve a $12.3 million bond project to help fund several asset preservation projects on campus, including Lovett. The board also voted to accept a gift of $500,000 from the Murray State University Foundation Inc. for the funding of the new seating. The main hall will be named Trustees Hall in honor of the current Murray State Foundation Board of Trustees.

In August, the university officially launched the “Show Us How You Lovett” fundraising campaign, in which donors can have their name placed on a commemorative nameplate on one of the new seats. The location of the seat can also be chosen by the donor in one of five available sections on the the auditorium’s main floor. Seats will be named on a first-come, first-served basis through an online campaign platform and seating map available at murraystate.edu/lovett.