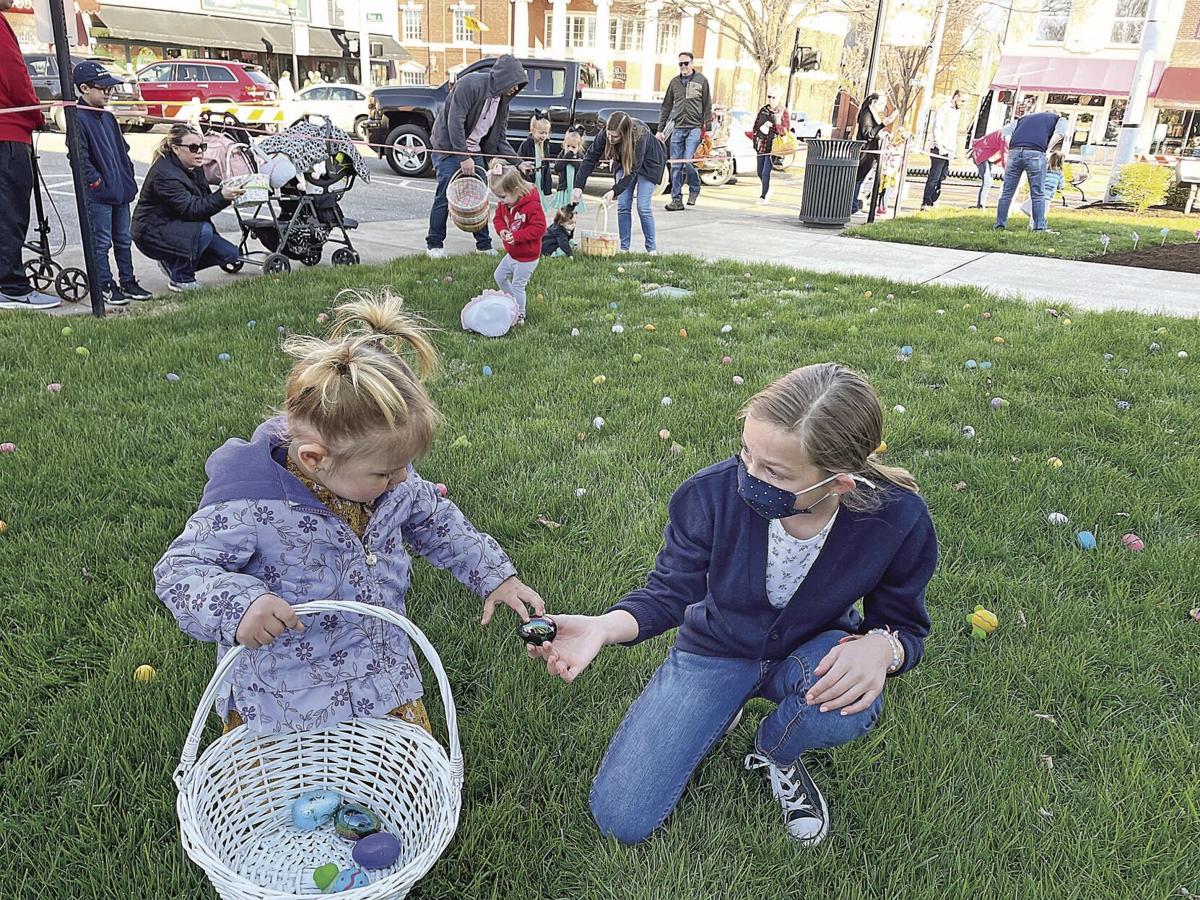 Adeline Pitman, 10, of Murray, right, hands an egg to her cousin, Kendall Mijay, 2, of Allen Park, Michigan, Saturday morning during the Easter on the Square event in downtown Murray. This was taken during the first egg hunt of the day for ages 0-2 on the north lawn of the Calloway County Courthouse. Pitman is the daughter of Adam and Tiffany Pitman, while Mijay is the daughter of Seth and Alexis Mijay. 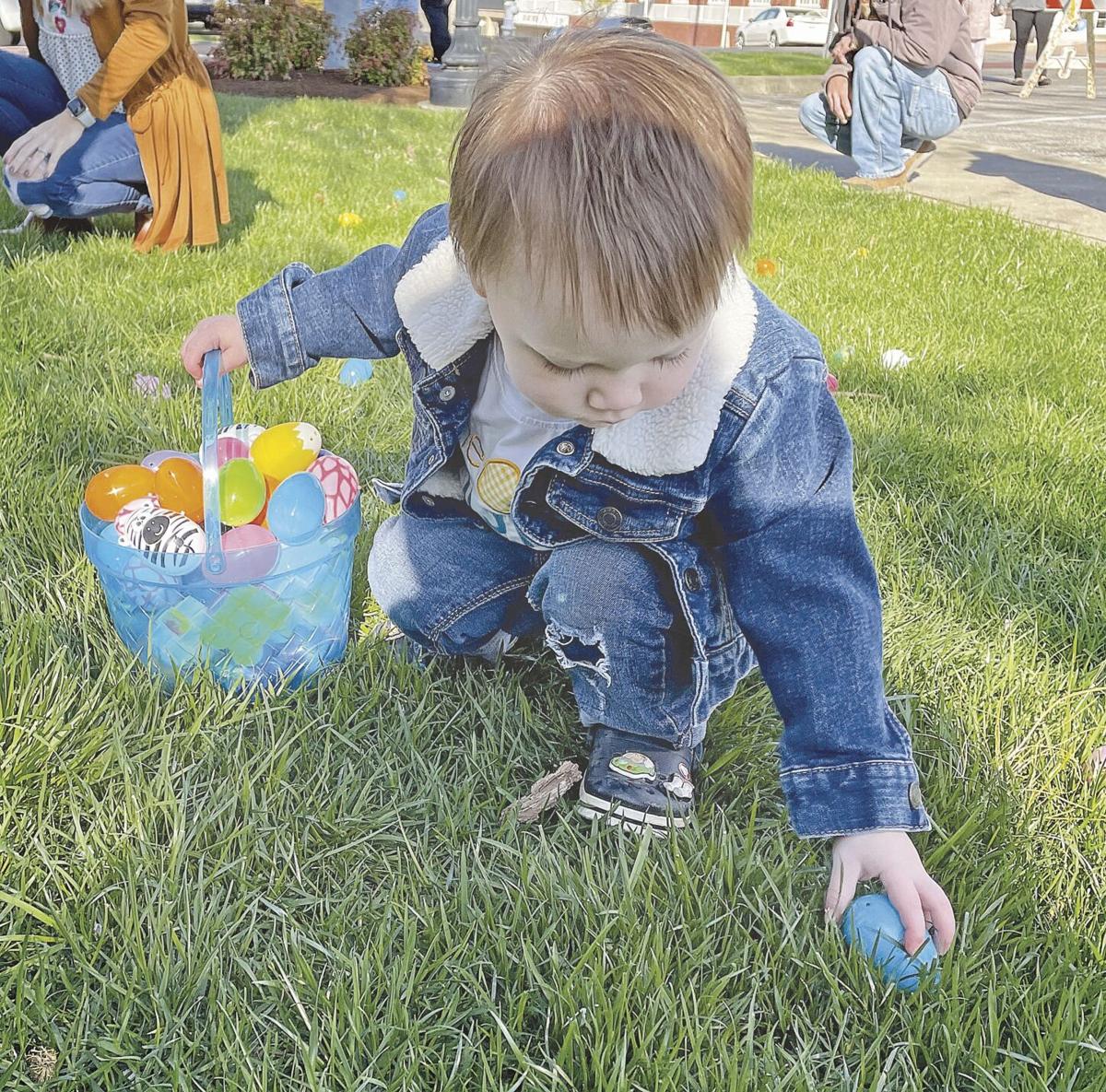 Gatlin Hill, 1, of Murray, prepares to add another egg to his already overflowing basket Saturday morning during the return of Easter on the Square to downtown Murray.

Adeline Pitman, 10, of Murray, right, hands an egg to her cousin, Kendall Mijay, 2, of Allen Park, Michigan, Saturday morning during the Easter on the Square event in downtown Murray. This was taken during the first egg hunt of the day for ages 0-2 on the north lawn of the Calloway County Courthouse. Pitman is the daughter of Adam and Tiffany Pitman, while Mijay is the daughter of Seth and Alexis Mijay.

Gatlin Hill, 1, of Murray, prepares to add another egg to his already overflowing basket Saturday morning during the return of Easter on the Square to downtown Murray.

MURRAY — There is a reason an event that has happened for several years includes the word “annual” in its title.

That, of course, designates an event that happens each year. It also implies strength and dependability. However, even the strongest and most stable activities have fallen prey to the COVID-19 pandemic, most of which have had to take at least a one-year hiatus. Some may not return at all.

That was not the case for Murray’s Easter on the Square Celebration. Although it took a year off, it was back on Saturday.

And John Pitman of Murray was glad, and with good reason. This was an event that many members of his family, some of whom he has not seen for more than a year, were able to enjoy.

“They came down the year before and that’s when (one of his grandsons) got the big prize with a golden egg,” Pitman said after watching several of his grandchildren, some of whom are from Michigan, return to the city’s court square to fill their Easter baskets  to the brim. “But they’ve had their vaccinations. We’ve had our vaccinations and we’re trying to get things back to normal.

“Let me tell you, it doesn’t get any better than this, when you’ve got your family with you. That’s basically it.”

The biggest of these was in how the event was promoted, which was very quietly. In fact, word that Easter on the Square was returning did not start gaining a foothold in the community  until a few days earlier.

“We didn’t want to get a really big crowd in here, so we tried to keep it as quiet as we could,” Wright said, adding that the egg hunters — ages 0-8 — were able to keep a safe distance from one another, as were the adults who accompanied them.

“It was in about February that  (Main Street, along with the Murray Convention and Visitors Bureau) decided we were going to try this, and that was because the number of (COVID-19) cases had dropped so much. So we knew we were going to spread this out and would be finding ways to create more space for everybody.”

This also produced an opportunity for organizers. The lawn of the Calloway County Courthouse had always been the only venue for the hunt, as well as where the event’s mascot — Jellybean the Easter Bunny — would appear for photographs and visit with participants.

Saturday, there were multiple venues for the first time.

“We had Jellybean do pictures near the alley on Fifth Street and we were able to use the Renaissance Park (which is slightly off the square itself). We had never used it, plus it’s huge, so that gave us a way to spread everybody out even more,” Wright said of how the Renaissance Park (between First United Methodist Church and Poplar Street) was utilized for the day’s oldest division, ages 5-8.

“So it was a little different and we’re a little rusty, but this is a good event. It’s fun. It’s upbeat and having the kids here makes it even better.”

It did not take long for the many plastic eggs, even some with pinwheels, to be collected by the young hunters. Within only a few minutes, each age division’s allotment of eggs had been swept.

“I’m very, very happy,” said Stephanie Duncan of Calloway County, whose son, Levi, 4, had a productive day. As he left the courthouse lawn, his bucket was filled to the top with eggs of different colors. And he’s happy too. We missed this last year. It feels like we’re on the right side (of the pandemic). I like it that we’re getting back together for things a little more.”

“That’s what I was just talking about (with fellow parents), we’re glad to get a pretty good crowd back out here like this,” said Cody Brown as his sons, Cody and Camden, were preparing for their chance to hunt.

“They were really excited about this. They woke up super early this morning so they’re pumped up.

“You know what they’re most excited about, though? Seeing characters again ... like Jellybean.”

Last year, Jellybean was able to participate in a photo event in which some children were still in their vehicles as social distancing became part of everyday language. Wright said she had good authority that the bunny was pleased with how Saturday went.

“Oh she’s excited. She didn’t know what to do last year,” she said.