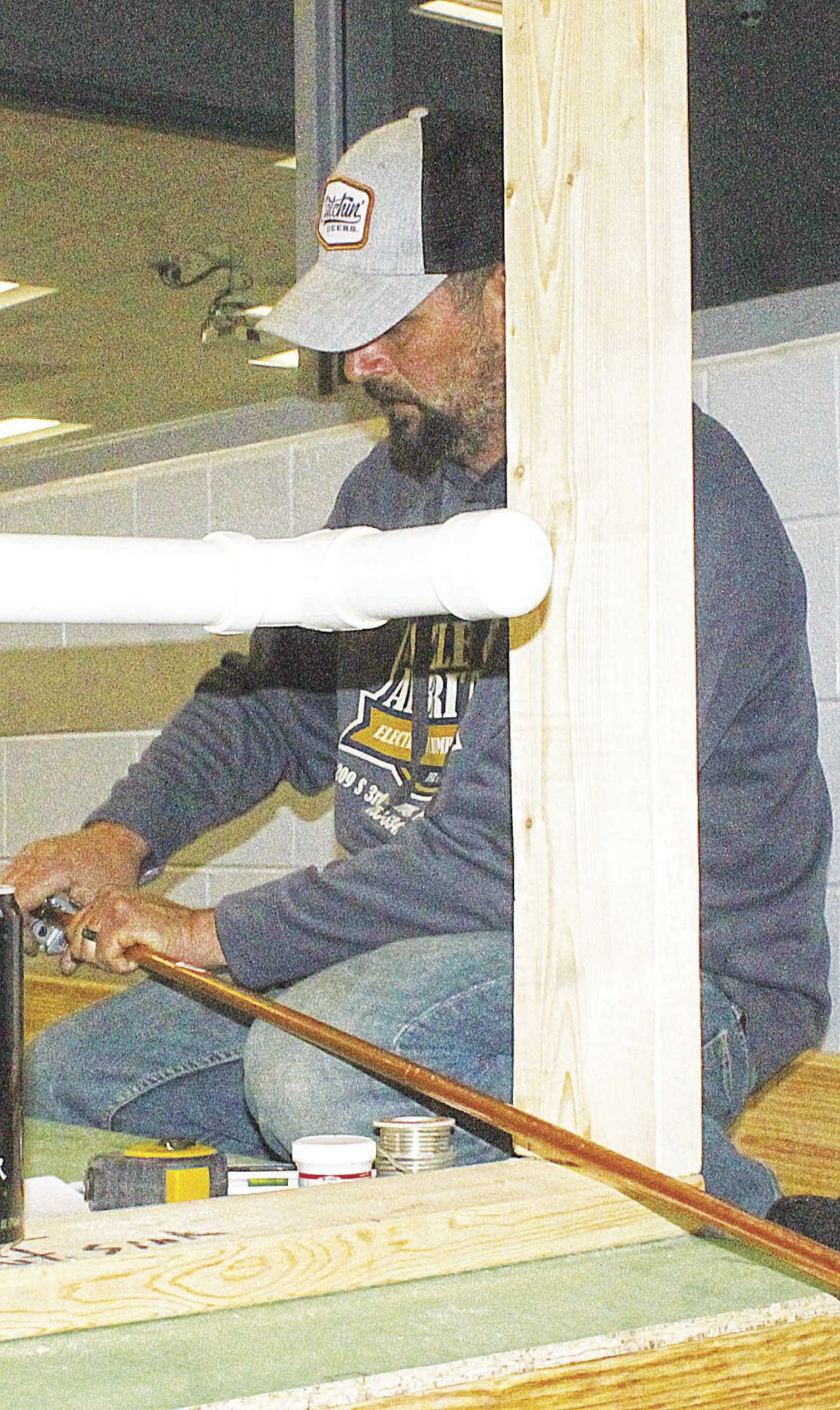 Jeff Crass of Murray works with a narrow piece of piping Tuesday evening during a plumbing class at the Murray-Calloway County Area Technology Center. 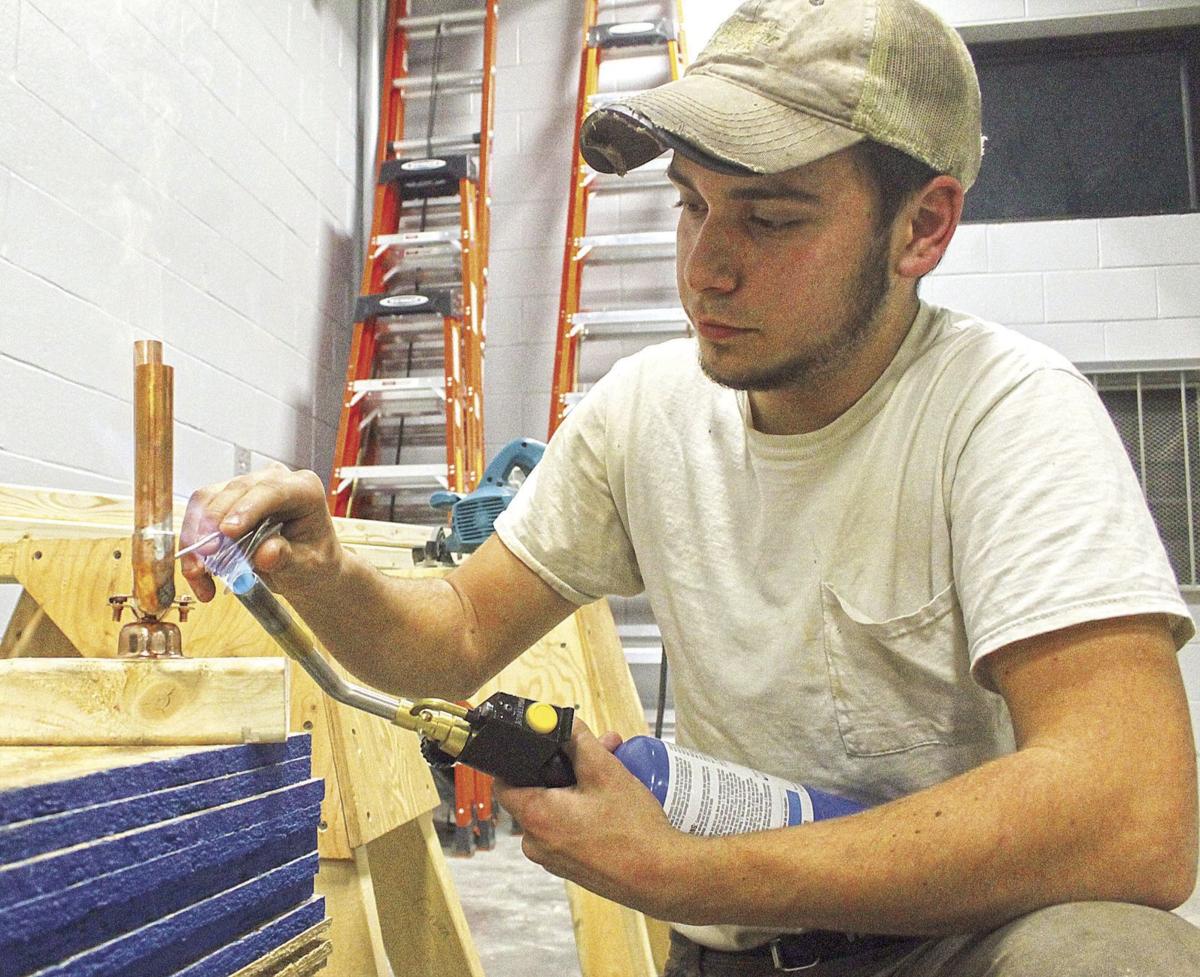 Cade Brockwell of Murray uses a blow torch to sauder piping Tuesday evening during an assignment as part of a plumbing class at the Murray-Calloway County Area Technology Center. 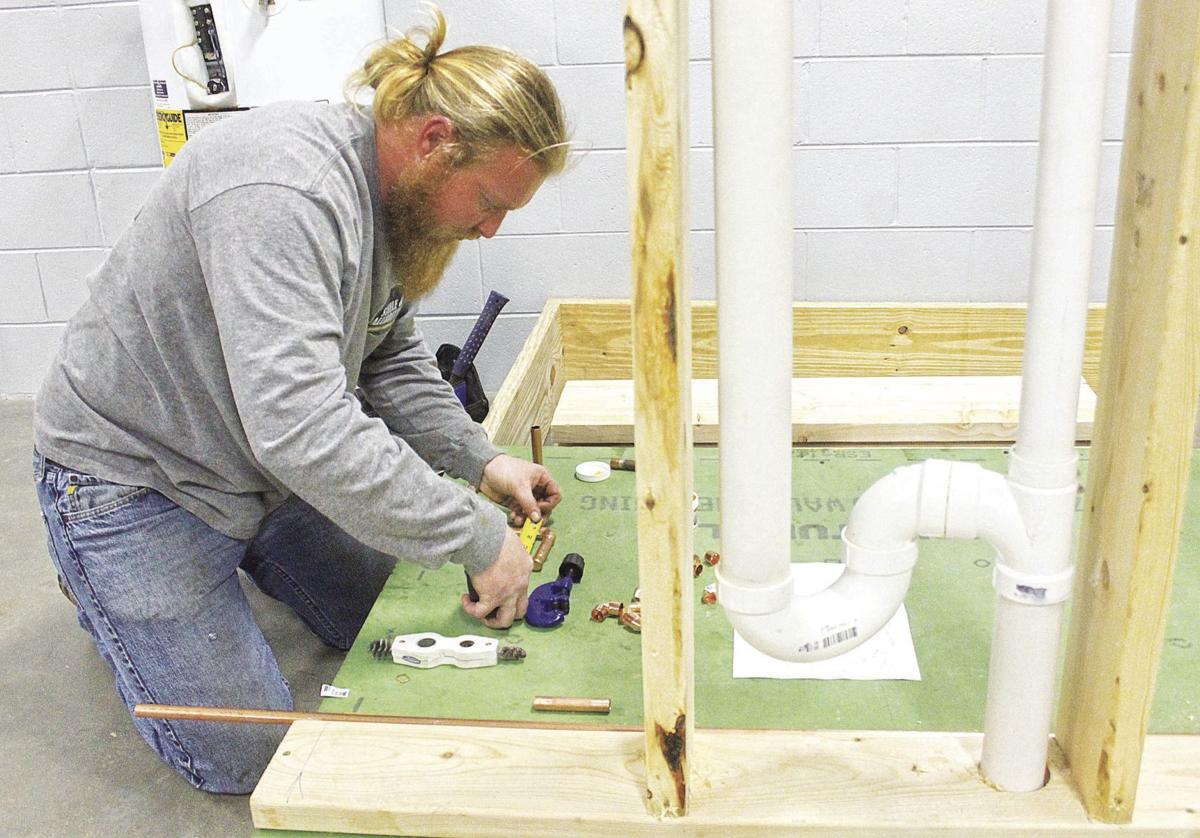 T.J. Miller of Murray uses a tape measure to determine the size of a small piece of piping Tuesday evening as part of an assignment in a plumbing class at the Murray-Calloway County Area Technology Center.

Jeff Crass of Murray works with a narrow piece of piping Tuesday evening during a plumbing class at the Murray-Calloway County Area Technology Center.

Cade Brockwell of Murray uses a blow torch to sauder piping Tuesday evening during an assignment as part of a plumbing class at the Murray-Calloway County Area Technology Center.

T.J. Miller of Murray uses a tape measure to determine the size of a small piece of piping Tuesday evening as part of an assignment in a plumbing class at the Murray-Calloway County Area Technology Center.

MURRAY — With a massive shortage of licensed plumbers across Kentucky these days, anything that could help trim this deficit is sure to be met with strong support.

That is why a sizable group of statewide officials were at the Murray-Calloway County Area Technology Center Tuesday evening. They wanted to see for themselves the plumbing class they had been hearing about for the last few months. A joint venture of both Calloway County Schools and the Murray Independent School District, as well as the Murray-Calloway County Economic Development Corporation and local contractors, the class is expected to send five students into the workforce when they finish it.

That was why the students were being watched so closely Tuesday by such a high-profile audience.

“It’s a little bit hot in here,” said student T.J. Miller of Murray, chuckling a little at the added attention. “Yeah, it’s definitely a surprise. There’s a lot more people than I thought would be here tonight. I don’t mind, though. I enjoy it. I love the trade and I’m glad I got into it. I feel like this is definitely going to pay off.”

When it comes to plumbing officials in the commonwealth, Tuesday’s lineup was about as high-caliber as it gets. It was led by David Moore of Lee County, the interim commissioner of the Kentucky Department of Housing, Building and Construction. Moore was joined by Mike McPherson of Bowling Green, the department’s planning reviewer for the western half of the state; Kentucky Division of Plumbing Field Operations Manager Jeff Hardin and local plumbing inspector Brad Erwin of Murray.

“Seeing them here tickles us to death,” Moore said. “The more we can get (prospective students) involved in something like this, the happier I am. Any time I hear of one of these programs starting around the state, I want to see it. We’ve been working on getting these kinds of programs started for the last four years I’d say, and we’ve had good success with it (particularly in Frankfort and Perry County).

“Right now, most of the plumbers in the state of Kentucky are in excess of 50 years old, so we need a lot of new, younger people to get active in this trade. This is one way of doing it. These are lucrative jobs; they pay really well. Right now, I’ve got a young man (in another part of the state) who got into the trade about four or five years ago. Right now, he’s running a job at an airport making $52 an hour. So yes, if you want to get into this trade and want to apply yourself like it looks like (the Murray-Calloway students) are doing, they can definitely make good money.”

EDC President Mark Manning said this class was formed over the past two years. He said it is financed by the EDC and local contractors, with the school systems providing the space for the class, being that the facility is jointly owned by those systems.

“So rather than try to reinvent the wheel and set up some huge program that we don’t have money for, we just got together and very quietly created this plumbing class,” Manning said. “It’s a night class and, right now, it involves only adults (out of high school). What’s great is that it is now to the point that it’s clear that it’s going to be successful.

“We’re also hoping to someday start an electrical program (also as a night class) but we’re still working on that. What I’ve found is that when you take one bite at a time from low-hanging fruit, then your long-term success rate is much higher. We don’t have any money from the state and don’t have any money from the feds on this. We’re doing it ourselves and hopefully, we can build off that.”

One person very pleased to see this class launch is Bud Byars, president at Murray’s Steele & Albrittten Plumbing firm. He gave a first-hand account of how difficult it has been for his company to find licensed employees.

“We couldn’t find (trained people) at all, and the young people who would come to us didn’t have the training. This works well for an adult who needs to go back to school but can’t afford to during the day,” Byars said. “We’ve got five in it to start and their attendance has been great. It’s worked out really well so far.”

The class is taught by veteran state plumbing inspector Mark Hayden, a Graves County native now residing in Calloway County. He said that while the initial number of five students might not seem like a success, that is actually an advantage for him when it comes to everyone learning effectively.

“This class is set up where basically you’re 40% in the classroom and 60% in the shop doing hands-on things, so my experience is that if you get too many guys in a class, you’re going to have some going faster and some going slower and you lose some because the ones further along actually have to start doing stuff they already know how to do,” Hayden said. “In a small class like this, if one of them gets behind, you can work with them easier and get them caught up.

“So far, these guys are doing really well, it’s been a really good group of guys to work with. They get along well and they work together well too, and they really seem to be excelling fast.”

The class started in November and continues for nine months, Hayden said. From there, the students can take the exam to obtain their journeyman’s license. Moore said that license can be in their possession within two years.

That is path Keaton Tidwell of Murray is hoping to take, and he believes this class is giving him an added edge.

“I go from working all day (as an apprentice, which he described as being a ‘helper’) and I’ll be watching and realize that I really don’t understand (the tasks in the field) to being able to come here and actually break down everything,”  Tidwell said. “The problem is that while we are on a job, I don’t have time to ask. Once I get my license, I’ll always have a job with this.

“I think it’s great having (all of the state officials) here. They’re here to help, to be a guide. I’m just a lowly plumbing student from Murray and I’ve got the head honchos from the state down here watching us. That’s pretty neat.”