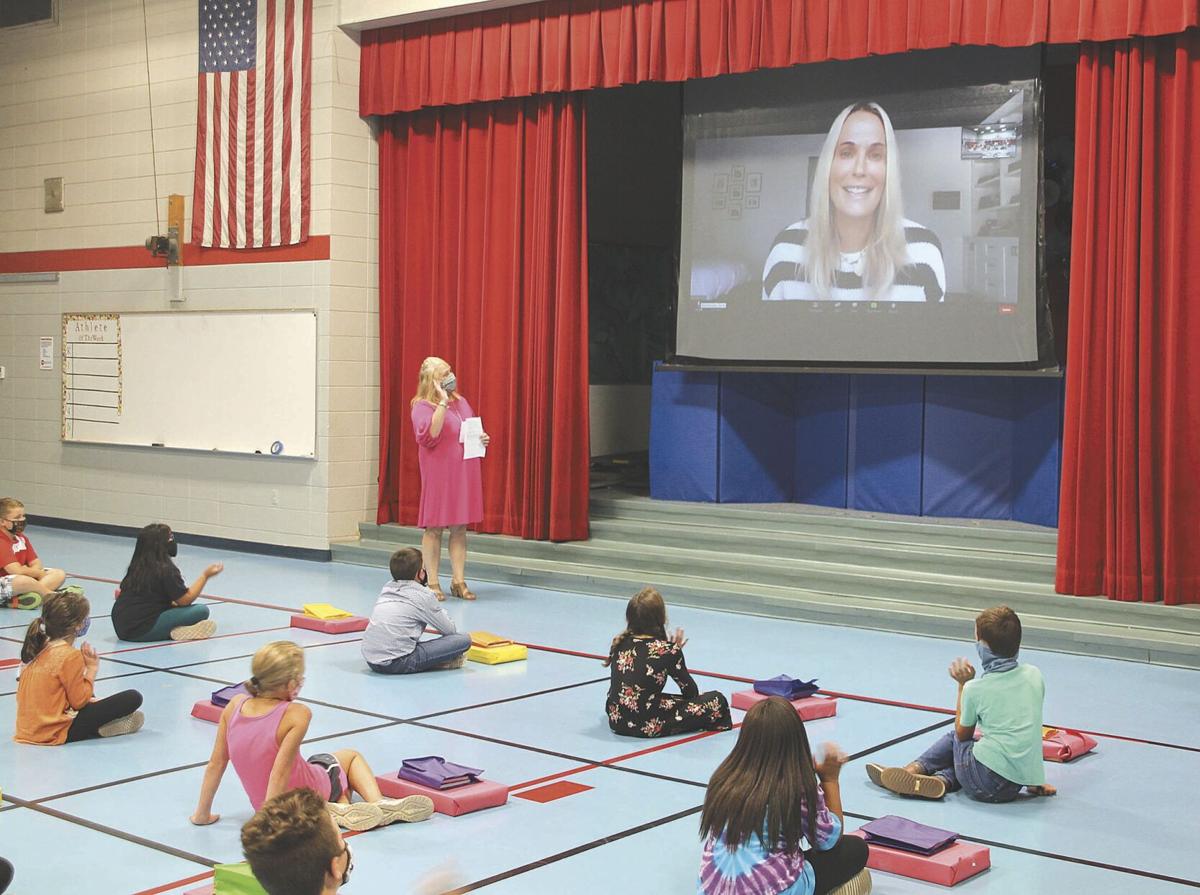 North Calloway Elementary School Principal Melinda Hendley talks with Molly Sims, an actress originally from Murray, on a projection screen Thursday prior to Sims reading the students gathered in the gym a picture book. The Zoom reading session was part of an event organized by Epic in which the company donated Chromebooks and other learning materials to fourth grade students. 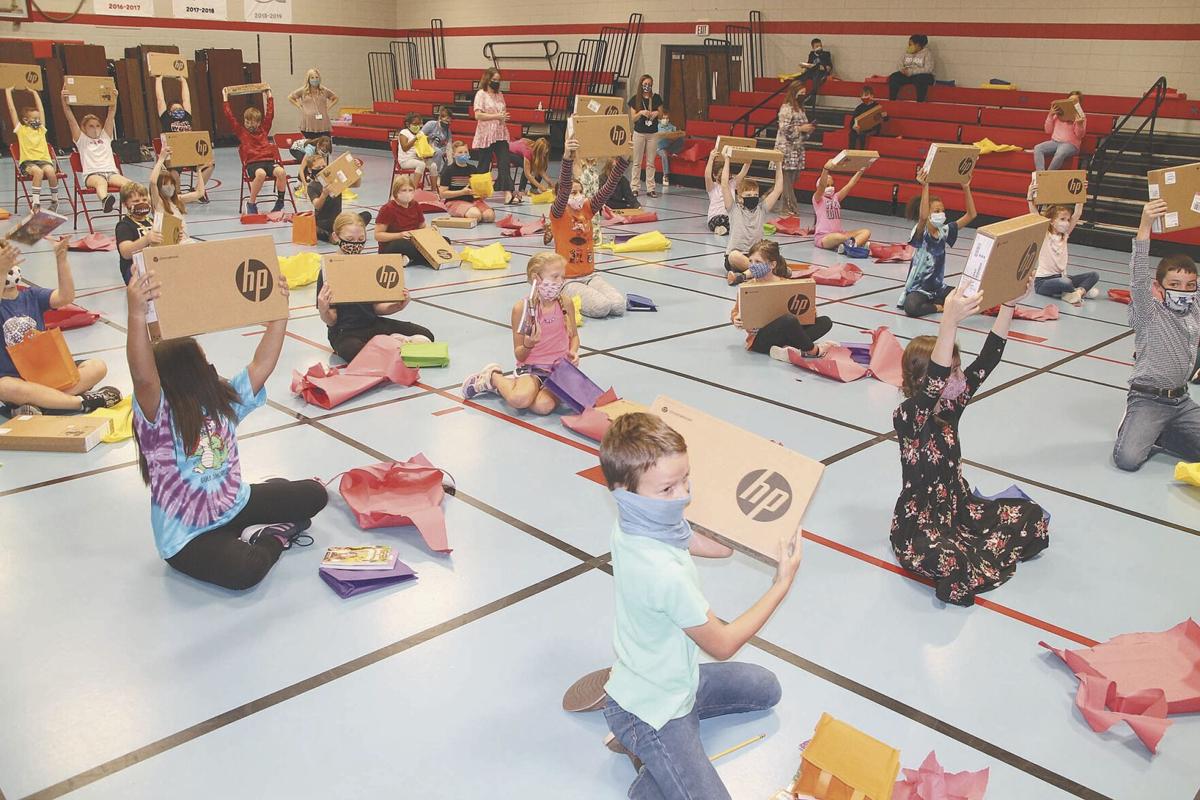 Fourth graders at North Calloway Elementary school excitedly hold up their new Chromebooks after being surprised with them during a Zoom story reading with Molly Sims, an actress and model originally from Murray.

North Calloway Elementary School Principal Melinda Hendley talks with Molly Sims, an actress originally from Murray, on a projection screen Thursday prior to Sims reading the students gathered in the gym a picture book. The Zoom reading session was part of an event organized by Epic in which the company donated Chromebooks and other learning materials to fourth grade students.

Fourth graders at North Calloway Elementary school excitedly hold up their new Chromebooks after being surprised with them during a Zoom story reading with Molly Sims, an actress and model originally from Murray.

MURRAY – Actress and model Molly Sims read a book to fourth-graders at North Calloway Elementary on a video call Thursday before surprising them with their own personal Chromebooks from the educational digital reading company Epic.

Sims is originally from Murray and graduated from Murray High School. As a model, she appeared in magazines and ad campaigns, and she has acted in movies such as “Fired Up!” “Starsky & Hutch,” “Yes Man,” “The Benchwarmers” and “Pink Panther 2.” She was a cast member on the TV series “Las Vegas” and most recently appeared in the Netflix comedy movie “The Wrong Missy” earlier this year with David Spade.

Sims, who has three children, appeared on a large screen in North’s gym via Zoom to read the fourth grade class “Hector’s Favorite Place” by Jo Rooks. After some of the students got a chance to ask her questions, she surprised the class by announcing that Epic – a platform that gives subscribing educators and families access to thousands of books, videos and quizzes from different publishers – donated Chromebooks to the school, as well as free year-long subscriptions to the service and additional books and other back-to-school items. The books and Chromebooks were wrapped and had been placed in front of the students before Sims read the story, so when they were given the go-ahead, the children excitedly ripped the paper off and held the materials aloft.

“I know you guys are in fourth grade, which is a huge deal, and I know this year looks a little different,” Sims told the students. “You’re Zooming and it’s hard to connect and you missed your teachers and you missed your friends (before school started back in person), and that’s why I partnered with Epic to help us connect through books and learning and through stories. Each of the stories that have been picked for your lessons focus on challenging times, overcoming fear, realizing your own power and your own strength and your own worth, that you can power through anything and hard work is everything. (Also) finding community in unexpected places.

“I’m really excited to be here. Your teachers work so hard and I’m so happy you guys get to be in school. I’m in California and I have two little classrooms downstairs. I have a second-grader and a kindergartner and a little one in preschool. I’m so excited to meet you guys virtually.”

After surprising the students with the tablets and books, several of the kids got to chat with Sims. She complimented Collin Naber, son of Casey and Jessica Naber, on his mask and asked him what his favorite book series was. He said he loved Harry Potter, and Sims said she and her children had recently watched all the Harry Potter movies and were now making their way through the novels. One girl told Sims she liked Barbara Park’s Junie B. Jones series.

One student asked what Sims favorite series was, and she said loved Nancy Drew growing up. Another student asked Sims what it was like in California. She said it had been a challenging time recently, with schools still closed because of the coronavirus and raging wildfires, along with temperatures recently reaching 110 degrees.

“But it’s good, you know, we’re powering through it and just like you, we’re always trying to connect with our friends and our families and our teachers,” Sims said. “I want you guys to really focus in and appreciate what your teachers are doing for you because it’s a difficult time, but they love you and we love you and I hope you guys get to come to California soon and I get to go to Kentucky soon!”

North Calloway Principal Melinda Hendley said that because the fourth grade teachers were using Epic in their classrooms, the corporation contacted the school about a partnership.

“(Our classes) use a teacher subscription, and that only allows them to use it throughout the day,” Hendley said. “So what our kiddos are getting is a subscription that they can use for a year at any time, so that is huge and remarkable. It’s going to help give them access to more resources at their fingertips. On top of that, having their own Chromebooks allows each kid … to keep their own devices, and especially with the virus, that helps with safety.”

Fourth grade teacher Brittany Causey said she likes using Epic in her classroom for many reasons, including that the software makes it very easy for her students to find Accelerated Reading books at their level. She said it is useful not only for reading, but science as well.

In a news release, Epic co-founder Kevin Donahue said, “With so many families experiencing a back-to-school season like no other, we wanted to use our treasure trove of books to help foster connection at a time when kids, teachers and parents need it most. We understand the challenges of the growing digital divide, and the importance of access, particularly in times of school closures. While we can’t solve this problem alone, we will continue to find creative ways to remove the barriers between kids and great books. We’re thrilled that partnering with Molly Sims has allowed us to bring real connection, joy and computers to the kids at North Calloway Elementary School.”

“Back-to-school season is always hectic, but this year it came with a whole new set of worries,” Sims said in the release. “As a parent of three children whose love of reading has been fueled by Epic, I was looking for tools and resources to help make the transition back to school this year easier. Epic is not only a resource to keep kids learning and reading, it’s one that helps kids foster connection, something so many will be unfortunately missing this year. Surprising an elementary school in my hometown was amazing. It felt so special to be there with them, virtually, and see the kids’ faces during our read along, and the teachers’ faces when we gave them the Chromebooks, that was priceless.”