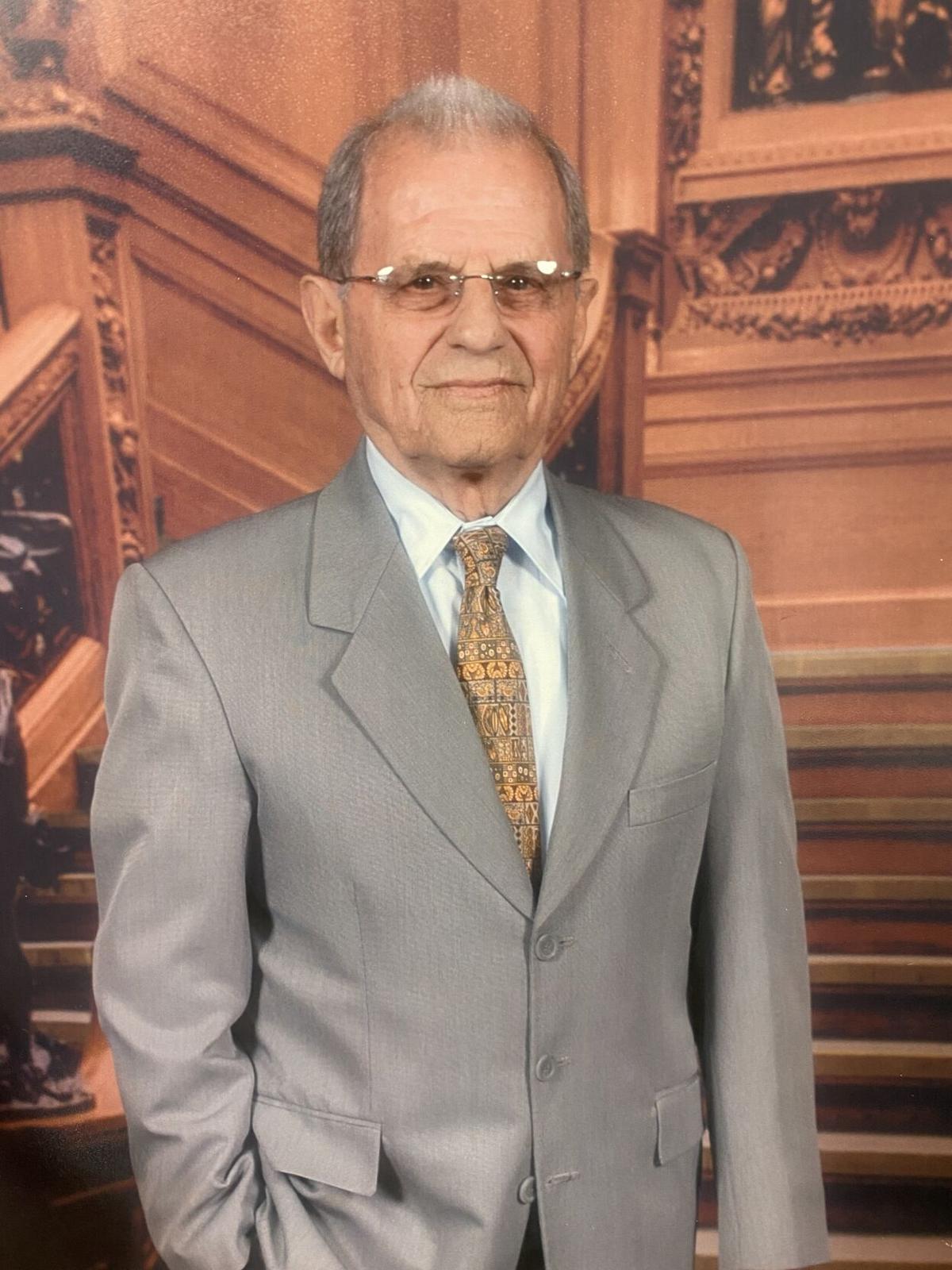 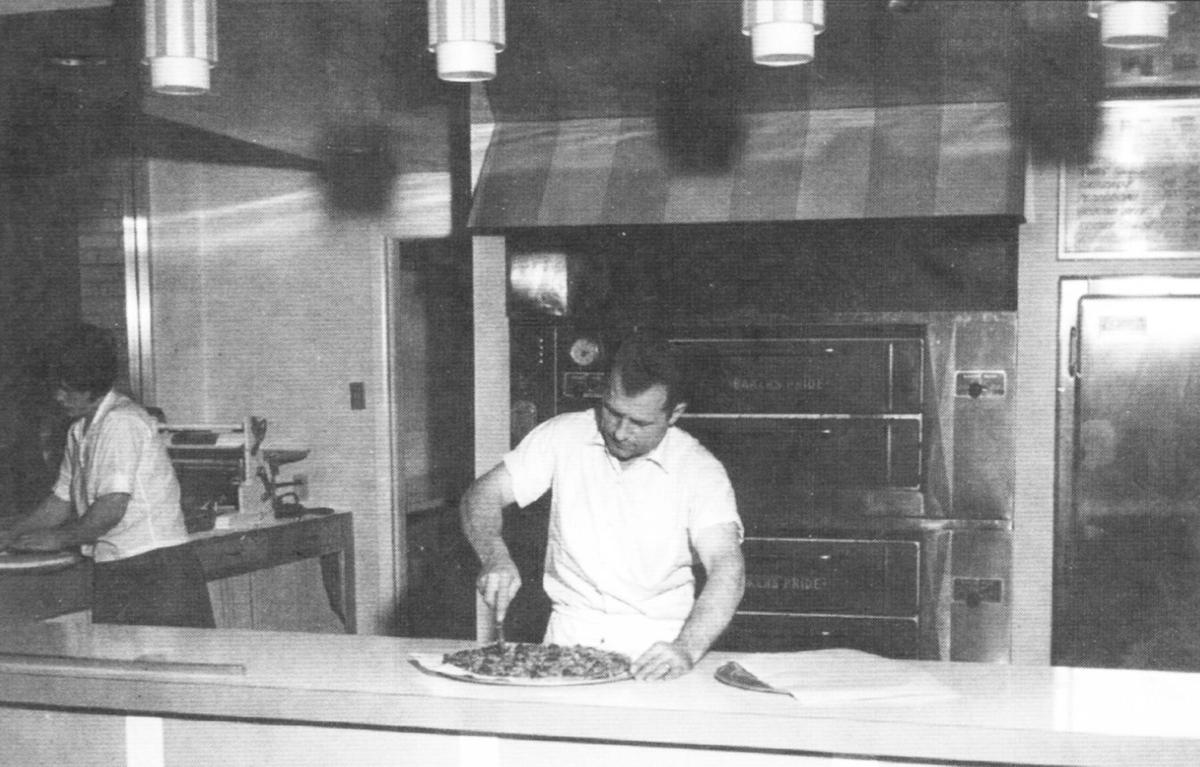 Tom Karvounis, right, cuts a freshly-made pizza as wife, Helen, works on another pizza at Tom’s Pizza in a photo taken in 1967 at the Murray eatery.

Tom Karvounis, right, cuts a freshly-made pizza as wife, Helen, works on another pizza at Tom’s Pizza in a photo taken in 1967 at the Murray eatery.

MURRAY — Longtime Murray businessman, Tom Karvounis, died this past week, at the age of 96.

I remember meeting Tom and his wife Helen when they opened Tom’s Pizza in 1966. I was a junior at Murray High School and all of my friends and I were very excited about the first pizza restaurant in Murray. You could get a pizza in Murray at some of the local restaurants, but they offered other choices, not just pizza.

I spent many hours sitting in Tom’s with friends and enjoying their pizza. I remember their daughter Kiki as a small child running around the restaurant and visiting with all the patrons because Helen would be working behind the counter.

Tom and Helen would later close that restaurant, but by that time, Murray had other pizza places. But I sure did miss Tom’s Pizza, and was delighted to learn they were reopening Tom’s Pizza in 2006. I wasn’t living in Murray at the time, but that was one of my first meals when I came back for a visit.

A story about Tom was written by Greg Travis for the 2014-15 Regional Dining and Entertainment Guide published by the Ledger and Times.

“Local restaurateur Tom Karvounis knows the meaning of hard work. It’s a philosophy he has practiced all his life.

‘I should write a book,’ he said, ‘a book about what life is like to build up experience in the business world. It’s important what I have proven to myself.’

Karvounis said he did not have a lot of formal education, but education and learning were very important to him and he had always placed a high priority on them.

‘I came to America in 1956 and had to learn the language,’ he said - a task he conquered through his everyday work duties and life in general.

‘I can remember back when I was younger and first arrived in Ohio, there was a huge snow. I never worked so hard in my life as I did during those years,’ he said. ‘I had seen hard times at home with the difficulties of life during World War II, a Civil War in Greece and even being shot in the leg, but this was hard work. I worked in maintenance, as a delivery agent, a cook … I worked midnights and many other long hours - one job after another.’

From 1950-56, he began working in Athens, Greece, as a police officer when President Dwight D. Eisenhower approved 17,000 people to come to the U.S. if they had all the proper papers.

‘I was able to get here and that’s when I went to Ohio,’ he said.

He said he remembered that he didn’t like the food at the time and quickly lost 15 pounds.

After months of working at various jobs, he became homesick for Greece and returned, but he said he found life to be different.

He soon married and shortly thereafter, returned to the United States where he again worked as a cook and, with his wife, raised two children.

‘Those were the best days of my life,’ he remembered.

He said he had three important aspects of life. First was his health. Second was his wife and third was his personal attitude of hard work and determination.

‘During that time in Ohio, I was in the newspaper when I was asked what I would do if America and Russia became involved in a war,’ he said. ‘I said I would give everything, even my life. After that I started getting letters from people trying to sway my opinion. It took a long time for people to see I meant it. I thought, this is the best country there is.’

‘After spending those years in Ohio, we packed our belongings in a 1955 Chevrolet and started traveling south. We had decided we were going to find the right college town to open a pizza restaurant,’ he remembered.

‘We made it to Paducah and stopped at a restaurant owned by Albert Jones’ father. As we sat there, we heard him speaking Greek. It was a surprise and so we started up a conversation. We told him what we were doing and he told us to drive about one more hour and stop in Murray. We’ve been here ever since,’ he said.

Karvounis said Murray was a small, friendly community even then and those were some of the wonderful qualities that appealed to his family. ‘The people we met were great and we were warmly received in the community.’

‘We looked at a couple of locations and decided upon a spot on North 12th Street. In 1966, we opened the first Tom’s Pizza,’ he said.

In 1999, the Karvounis family once again entered the restaurant business, opening Tom’s Grille on Murray’s north side. Tom’s Grille features steaks, seafood and a variety of pastas and salads from family recipes. In 2006, Tom’s Pizza was reborn in an all new restaurant at the same location where it all started.

‘For eight years, customers just kept asking us when we were going to reopen a pizza restaurant. So we finally decided we would do it,’ Tom said.

He said he couldn’t begin to calculate how many pizzas he has made over the years, but even on days considered slow in the restaurant business, that number would far exceed 100 pizzas.

Karvounis observed that some of the key elements to his success have been quality food and service at a good price.

‘We go the extra mile to make sure everything is perfect,’ he said, ‘even making our own pizza sauce with our own spices.’

Although he didn’t divulge the secrets to his recipes, he did admit they weren’t old family recipes, but ones he had personally developed over the years by pulling bits and pieces from the best of everything.

He said the help of his wife and family has also been extremely important to his success in the business world.

‘We belong here,’ he said. ‘We work hard to have a place in life and to enjoy living. The business provides us an opportunity to support our families, to be with friends and customers and to have a purpose in life.’”

Tom, Helen and their family certainly belonged here and because of his love of Murray and his attention to detail with his restaurants, Murray thought of his family as one of us.

He also acquired the property known today as Olympic Plaza.

Tom and Helen traveled to Greece every year and Helen told me that when they closed Tom’s Pizza this last time, they spent many months in Greece.

Tom will be greatly missed by his wife and children and grandchildren, but he will also be missed by the Murray community. I know I will miss seeing him walking around Tom’s Grille and always speaking or nodding his head. He was certainly an American success story, but he worked hard to be successful and was thankful to his loyal customers and this community.