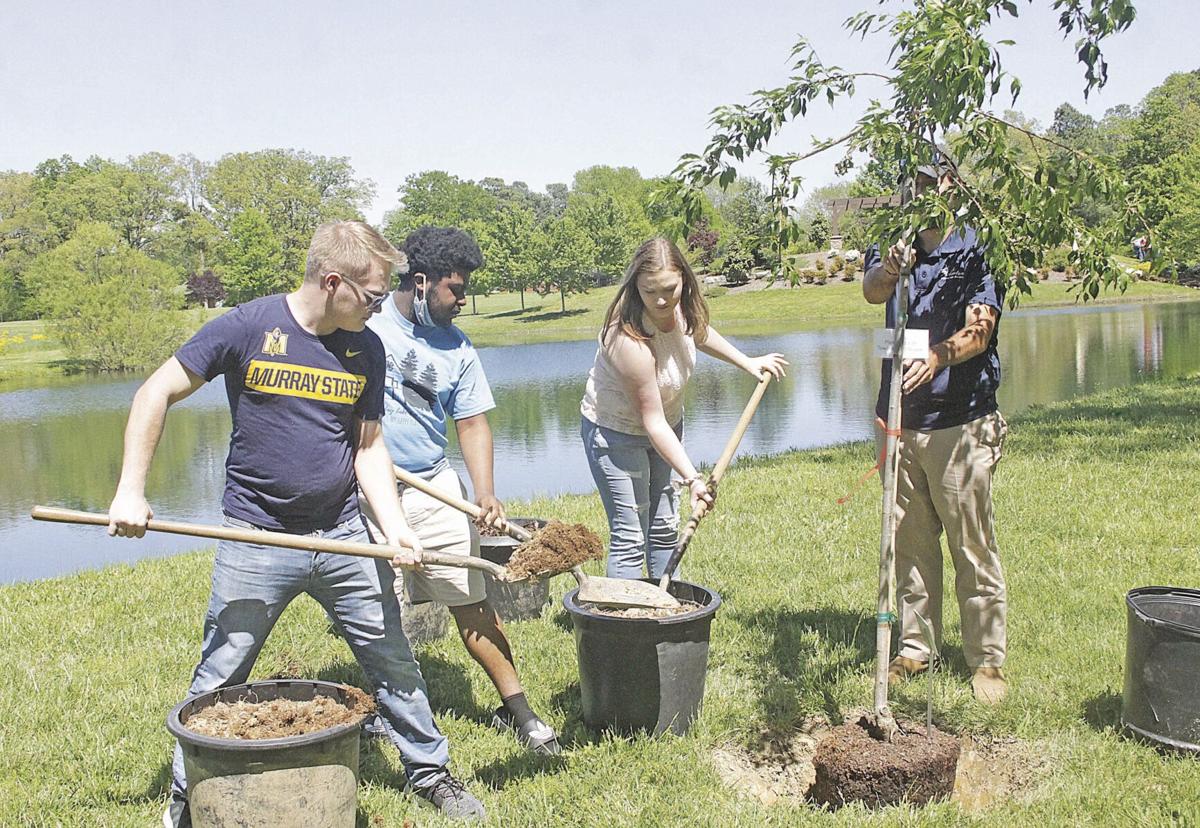 Murray State University students, from left, Tristan Hanks, Al Lloyd and Kate O’Connell prepare to send shovels of dirt into a hole Saturday that will provide stability for a weeping cherry tree near the pond of the Arboretum at Murray State University with assistance from Arboretum employee Aaron Brewer. The tree was planted in honor of Murray State veterinary tech student Sarah Townsend, who died in March. 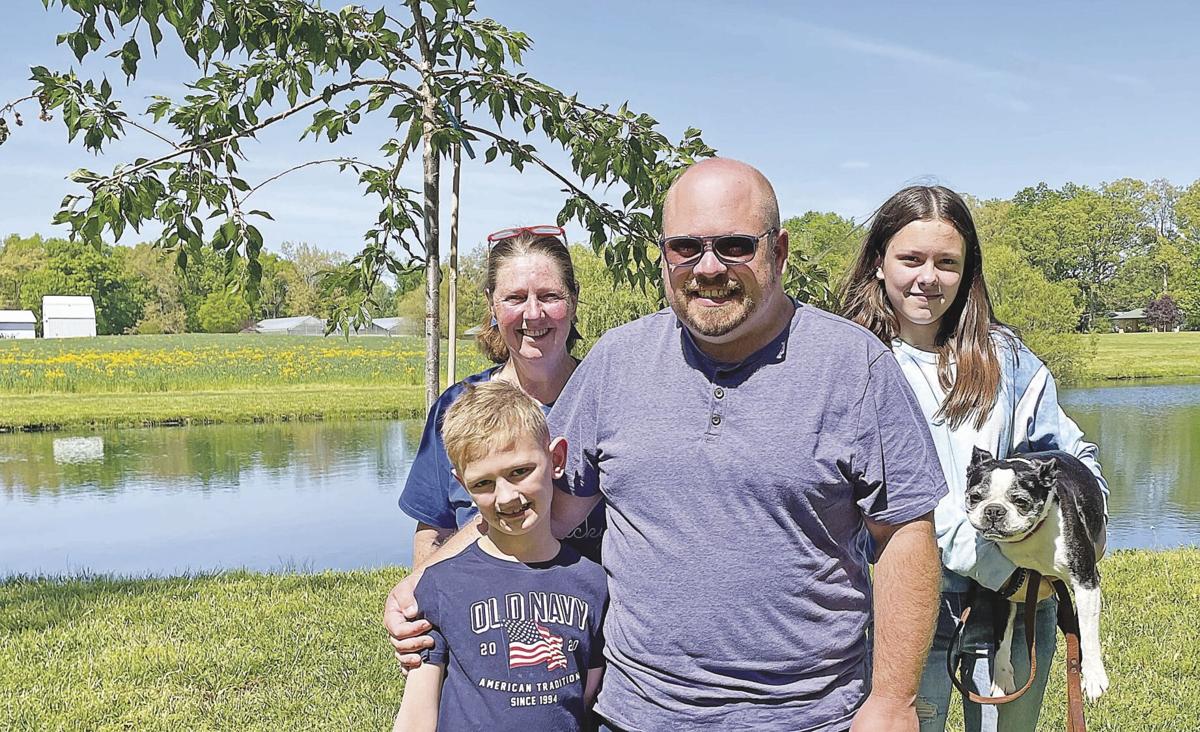 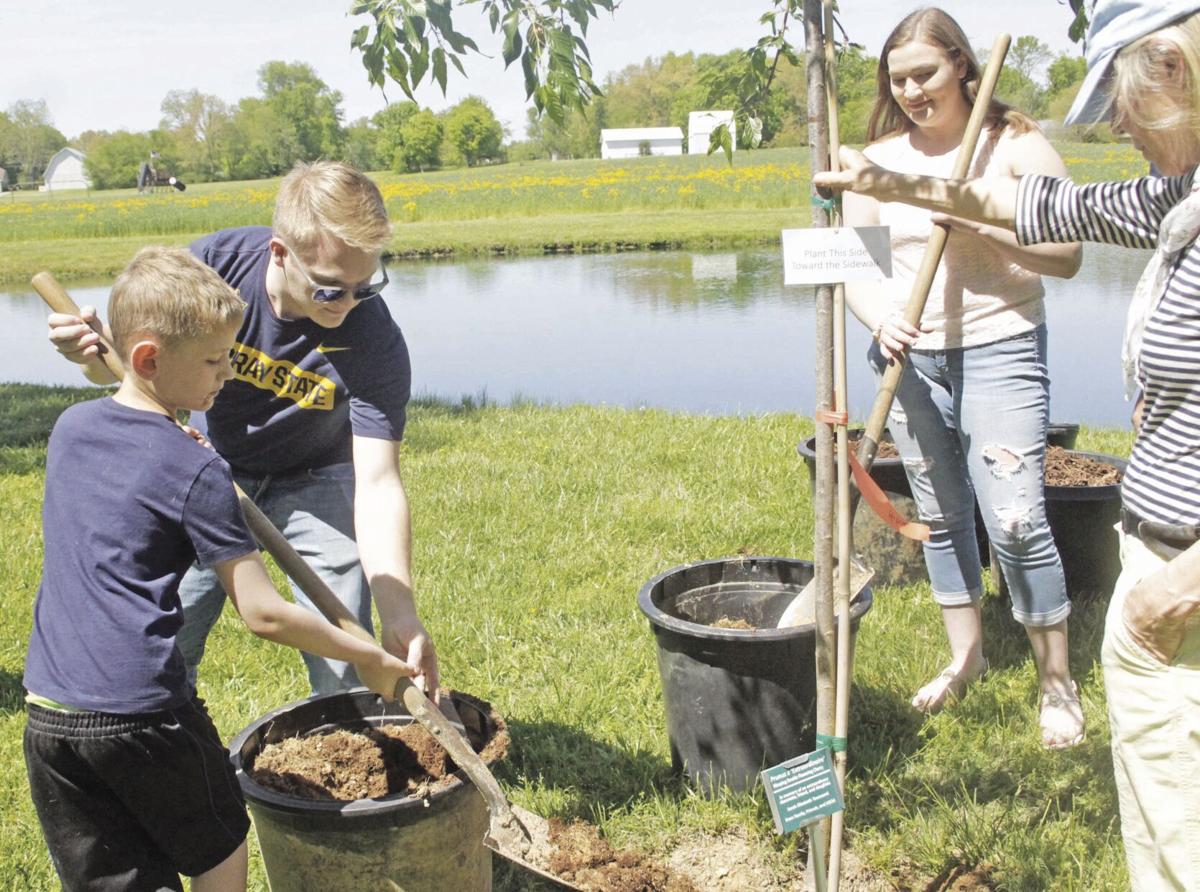 Murray State University students, from left, Tristan Hanks, Al Lloyd and Kate O’Connell prepare to send shovels of dirt into a hole Saturday that will provide stability for a weeping cherry tree near the pond of the Arboretum at Murray State University with assistance from Arboretum employee Aaron Brewer. The tree was planted in honor of Murray State veterinary tech student Sarah Townsend, who died in March.

MURRAY — Since the death of a Murray State University student in March, both the university community and the Murray-Calloway County community in general have sought to keep her memory alive through activities.

Shortly after the death of Farmville, Virginia senior student Sarah Townsend, there was a community march protesting violence against women. An Almo man is charged with murder in her death.

Then came a drive led by her former teammates with the school’s veterinary tech program to collect plastic bottle caps that will be recycled and transformed into a memorial bench.

What happened Saturday, though, near the pond of the Arboretum at Murray State University, seemed to be on another level.

That is because members of her family were present to see a tree — a weeping cherry, to be exact — be planted in her honor.

“I’m very pleased. The community has just been amazing in supporting her,” said Townsend’s grandmother, Lynn Hazelrigg, of Hopkinsville, who shared a piece from the time she and Townsend had together after she became a student at Murray State. “I’m also a wildlife rehabilitator and Sarah worked with me at my wildlife sanctuary two summers ago. We traveled over 6,000 miles, rescuing wildlife and releasing them once they were healthy and ready to go.

“I didn’t know about this until I happened to see it on Facebook (Friday). I knew something was in the works but I had no idea what it was or when it was happening. I had to change my schedule around this morning so that I could get here.”

Hazelrigg came with others. Townsend’s uncle, Julian Hazelrigg II and her cousins, Julian II and Kensley, also were able to see the ceremony. Julian II, now 9, also had an active role, as she joined others in shoveling dirt to help the tree be straight as it was planted.

In his soft voice, he also offered few but very powerful words, saying that his cousin played with him and loved him and took care of him. But it was his last words that hit the hardest.

“And I miss her very much,” he said, the seemingly perfect summation for how the audience, the campus and the community have felt and continue to feel more than a month after Townsend’s slaying.

It probably explains the vigor exhibited in the projects that have followed.

“Especially with the bench,” said event organizer Cheyenne Chaney, who reported that, as of Saturday, the bottle caps drive has amassed at least 873 pounds, which does not include the estimated 30 to 40 bags of caps collected during Murray State’s community recyclables collection earlier in the day. “All we needed was 100. The community outpouring has been great. Being a Murray native, though, I’m not at all surprised. It seems when something happens, we all ban together.”

“The students totally put all of this together on their own and they’ve done just a beautiful job,” Canerdy said, reflecting on Saturday’s ceremony. “Sarah would have smiled on this day.

Chaney said this has been very difficult for her, being Townsend’s death came about a month after own mother, also named Sarah, died. However, even though she said she was not Townsend’s closest friend at Murray State, being involved with the organizing of these activities has allowed her to grow close with Townsend’s mother, Melissa Coleman.

“She’s kind of taken me in,” Cheyenne said. “The thing is Sarah’s mom passed away on my mom’s birthday (March 26) and my mom had passed away the month before, so doing things for Sarah has been really good with helping with my own loss.”

Still, her best friend, Murray State senior Al Lloyd, said that he believes the world is missing a key piece without Townsend in it anymore. He said proof of this came when he communicated with someone from Murray shortly after Townsend’s death.

“I met a lady who said she saw her only one day in her whole, entire life and, from that one time, she never felt so happy,” said Lloyd, who is from Pinehurst, North Carolina. “She said she wished she could have known Sarah more. Think about that! Because of that one encounter, she felt so loved.

“When she told me that, I cried a little bit. She brought so much happiness to so many strangers.”

Lynn made one final observance about the day’s festivities. She said the choice for a weeping cherry tree fits Townsend’s persona in that it someday will produce large pink blossoms, matching her persona.

“She would love that,” she said. “I have planned to plant some cypress on our farm because ‘Cypress’ was actually her nickname. She got that at 4H camp because she was tall and strong. That was the name the staff and fellow campers gave her.”

Canerdy said bottle caps will continue being accepted at the Carman Pavilion (adjacent to the Cherry Expo Center on College Farm Road) through Friday.